Some years ago a similar "anomaly" occurred and it suggested the downturn in gasoline demand might be foreshadowing some economic downturn. I've long forgotten how that turned out.

Now we see a similar "anomaly."

This, I can say, I had not expected. At all. It may be nothing; it may be something. I don't know.

See the graphic below. I don't think this foreshadows an economic downturn. I don't know what it means, if anything, but I'm guessing it is due to some "one-off" -- perhaps the winter storms. I really don't know.

But if the "2018 gasoline demand" drops below that of a year ago, that would be cause for concern, I would think. 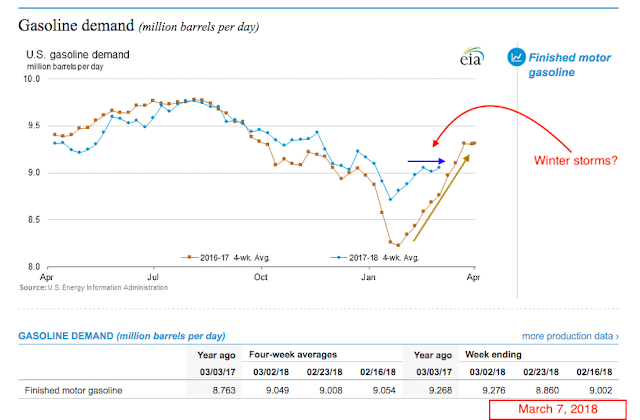 Having said that, the data in the graphic above and the most recent 1Q17 GDP forecast are certainly very coincidental, for lack of a better word.

The nowcasts of first-quarter real consumer spending growth and first-quarter real nonresidential equipment investment growth declined from 2.9 percent and 10.1 percent, respectively, to 2.6 percent and 6.9 percent, respectively, after the light vehicle sales release from the U.S. Bureau of Economic Analysis on March 2. The nowcast of the contribution of net exports to first-quarter real GDP growth declined from -0.43 percentage points to -0.59 percentage points after this morning's international trade release from the U.S. Census Bureau.

A little voice from the deep recesses of my mind just whispered to me: combine the "gasoline demand" graphic above and the most recent GDP Now 1Q18 forecast and the recent turmoil in the White House associated with talk of tariffs and the resignation of Gary Cohn and a narrative starts to develop.

Not to worry. The incredible jobs data tell a different narrative, and the Trump tax cuts are just beginning. Idle chatter.
Posted by Bruce Oksol at 8:08 PM