Posted by Bruce Oksol at 4:19 PM No comments: 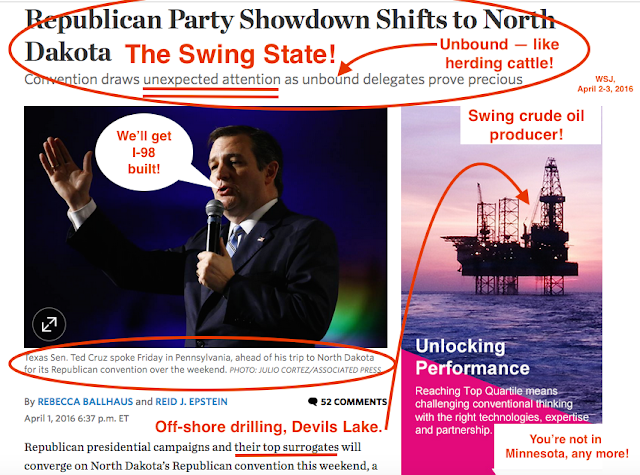 I apologize for posting this late. I had to get it cleared through the Department of Justice to ensure that my SuperPac was not corresponding with or coordinating with Ted Cruz. For newbies, to the best of my knowledge there are no Devils Lake oil rigs; the off-shore oil rig is only an artist's drawing of a rig in the middle of Devils Lake.

It appears that not only is North Dakota #1 in nuclear missiles (take note, North Korea), but it is also the global crude oil swing producer, and now the GOP swing state.


Breaking news:  President Obama, at University of Chicago: Senate decision not to consider Merrick Garland for Supreme Court is 'unprecedented.'

I believe the "President of the US Senate is Mr Joe Biden."

I believe "The Biden Rule" on this matter was formulated in 1992.
Posted by Bruce Oksol at 2:30 PM No comments:


Despite years of mutual frustration and disappointment over diverging priorities, Saudi Arabia and Egypt remain fundamental to each other's security, a message King Salman's visit to Cairo this week is intended to reinforce.

The rare foreign trip by the 80-year-old Saudi ruler will counter media commentary in both countries of discord between the richest Arab state and the most populous, to show Riyadh still backs Egyptian President Abdel Fattah al-Sisi.

Gulf monarchies have lavished aid on Egypt since 2013, but have grown increasingly disillusioned at what they see as Sisi's inability to address entrenched corruption and inefficiency in the economy, and at Cairo's reduced role on the regional stage.

At $30 oil, that "lavished aid" may not be so lavish any more. We've talked about this before.

Venezuela: sitting on top of the world's largest crude oil reserves and the country is now "giving" its workers "off" every Friday to save energy. And folks are still supporting Bernie Sanders here in the US.
Posted by Bruce Oksol at 6:41 AM No comments:


Oil steadied at around $40 per barrel on Thursday as a surprise fall in U.S. inventories the previous day was offset by an increase in exports from Iraq, underlining global oversupply.

From the two most trusted names (Bloomberg/Goldman) in oil price forecasting: oil at $35 is the "Goldilocks" ideal for US explorers.


Oil at $35 a barrel is neither too high nor too low but just right to make shares of U.S. explorers worth buying, according to Goldman Sachs Group Inc.

While prices of crude at that level are above cash costs of production, they will deter a rebound in shale output from occurring too early, the bank’s New York-based analysts including Brian Singer said in a report dated April 6. Oil at $30 to $35 a barrel should keep the behavior of U.S. companies unchanged and help lift West Texas Intermediate to $55 to $60 a barrel in 2017, according to Goldman.

Soil temperatures: an individual asked about the soil temperature in North Dakota during the winter. Don provides a link that tracks deep soil temperature on an hourly basis. In a state highly dependent on farming it makes sense this data would be tracked. What a great state.


Last year, the average retail reimbursement was around 17 cents per kilowatt hour.

Global warming, from The Weather Channel:


Climate change is a major threat to human health, with extreme heat likely to kill 27,000 Americans annually by 2100, according to a report released Monday by the White House.

The report, by the U.S. Global Change Research Program, outlines numerous ways global warming could devastate public health in the U.S. this century.

Global warming will lead to heat waves so extreme that in the hottest times of the year, it will be “physiologically impossible” for people who work outdoors to do their jobs, John Holdren, a science advisor to the Obama administration, said during a news conference about the report.

A big "thank you" to the reader who sent me this. The reader noted that it was strange that the White House still talks about "global warming." We are well past "global warming" -- first, it was global warming, then climate change, but now it's extreme weather.

All I can say is that we're on the highway to the danger zone:

I was mentioning to my wife last night: when I was in high school in Williston, back in the 60s -- the best era for music -- I recall all those stories of heat waves in Chicago and NYC resulting in an untold number of deaths; and, photographs of all those fire hydrants opened for inner city youth -- who grew up to be rappers -- playing in the water. We don't see those photographs or read those stories any more. Do we?

RBN Energy: CBR -- Bakken operators are losing $6/bbl shipping by rail to Louisiana. This is Part 8 in RBN Energy's series updating the sorry state of the CBR business in North America in 2016 compared to its heyday a few years back.


According to our friends at Genscape at the end of March (week ending April 1, 2016) Bakken shippers could sell their crude at the railhead in North Dakota for $32.05/Bbl. Prices for Light Louisiana Sweet (LLS) crude at the Gulf Coast were about $5.40/Bbl higher than at the railhead but the rail freight to the Gulf was a few cents less than $12/Bbl.

That means a Bakken producer would lose nearly $6.50/Bbl by shipping crude by rail to St. James, LA, versus selling in North Dakota. Yet despite Crude-by-Rail (CBR) economics being so underwater - the volumes delivered to two St. James terminals averaged 66 Mb/d in 2016 through March.  Today we continue our series on the fate of CBR with a look at inbound Gulf Coast CBR shipments.

Reminder: second refinery in southwestern North Dakota in the works.
Posted by Bruce Oksol at 6:19 AM No comments: