What do the Clintons have against the Dale Earnhardt, Jr, family?

Will the subject of China or tariffs come up tonight?

Link here, a pdf will download. New beef processing plant in Williston, data points:
Wow, this is such a great country.

Oregon has the export terminals.

This is simply so "neat" to see.

I have a particular "emotional" interest in this. My dad had more irons in the fire than anyone I knew when I was growing up in Williston. Among all his many business endeavors he talked often of a cattle feed lot along US 2 & 85 west of Williston, just before the 4-mile corner. Had he bought the land (and kept the minerals) I wouldn't be writing this almost ad-free blog. I would be living/working on a wholly-owned South Pacific Island owning/operating an internet domain targeting the fossil fuel industry. A journey of a tusen mil begins with the first step. -- Old Norwegian Proverb
Posted by Bruce Oksol at 1:36 PM No comments:

Not ready for prime time. Two problems here. I am rushed for time but I want to start the conversation so I will post what I have, planning to come back to it later. But this essay is still in progress. Second, I am not a good writer, never have been. I am not as articulate as I need to be.

Note: do not parse phrases or sentences. Take the essay in its entirety; the "gestalt" as it were.

Later, 5:50 p.m. CT: this is so incredible. I proofed the essay below and then removed "In Progress" from the subject line. Then checking twitter for news about another issue, I come across a link to this Forbes article: 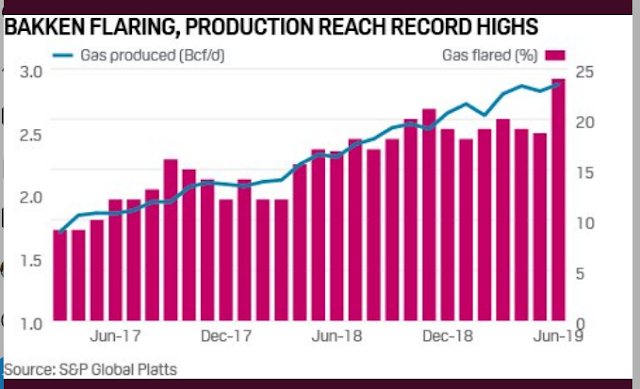 Because some pipelines from the Marcellus traverse NY state on the way to other states, Governor Cuomo is essentially setting energy policy for all of New England. How does he get away with it? LOL. But it proves the point in the essay below.

I'm looking for a better word than "boogeyman" to describe the phenomenon, but for now, I will use "boogeyman" as a placeholder.

There is no question there are bad actors at the nation-state level that would like to see the US oil industry severely constrained, if not destroyed altogether. At the top of that list would be Russia and certain state actors in the Mideast.

If one looks at the past 20 years of the US shale story, one can start to see that mosaic of efforts to kill US shale.

The US crude oil shale revolution began in 2000 in Montana, but the real jump began in 2007 in Parshall, ND, with EOG's discovery well.

Fracking literally caught everyone by surprise. Had fracking developed slowly, I am convinced that the shale revolution never would have occurred. Had protestors been able to shut down fracking in Montana in 2001, or in North Dakota in 2007, that would have been the end of fracking. Lessons learned in the Bakken make the Permian possible. Had fracking been banned in North Dakota, those lessons would not have been learned. The Permian was a dead basin at the time. There are states that ban fracking (e.g., New York) so anyone who suggests that banning fracking across the US never would have happened carry no credibility as far as I am concerned. Does California ban fracking? I have to check again on this -- but for all intents and purposes, it is my myth (worldview) that fracking is dead in California. [In fact, I would go so far as to say that long term -- twenty years out -- the tea leaves tell me the California oil industry is dead.]

The bad actors at the nation-state level have so far been unable to stop US fracking but their efforts continue. Again, it's an existential issue for them. There are multiple ways to stop the success of the US shale sector.

Let's count the ways:
I don't consider myself a conspiracy theorist but if one wants to call me one on this issue that's fine with me.

And, now, the Bakken boogeyman, flaring, as "an issue" returns.

I don't see flaring as a boogeyman.

I see flaring as an opportunity.

And yes, Virginia, there is a way to completely eliminate flaring in the Bakken. Shut down all drilling in North Dakota and Montana.
Posted by Bruce Oksol at 1:03 PM 4 comments:

Disclaimer: the usual disclaimer applies. Read at your own risk.