The company will continue to operate its North Louisiana division, which will now be managed from the Arcadia, Louisiana office.

Range has completed $1.1 billion in asset sales in the last 12 months, all of which will go toward debt reduction.

Mainstream media death watch: Sports Illustrated, a weekly as recently as 2015, will become a monthly in 2020. The end of mainstream media as we knew it at this site. As big as the story by itself is, digging deeper, it's an even bigger story:


Most notably, sources close to the magazine say, the “close time” for each issue will be 3-4 weeks, meaning that everything in every issue must be “closed” (all text and photos edited, complete, sent to the printer) more than three weeks before the magazine comes out.

That will meaningfully change the look and content of each issue, since stories will have to be evergreen enough to have a longer shelf life on newsstands. In addition, the iconic covers Sports Illustrated is so known for, which often show newsy photographs of a championship game or notable moment that just happened in the past week, likely won’t be possible.

Big headline, but a nothing-burger: the headline -- top US natural producer looks to sell major shale assets. "Nothing burger"? This could be a billion-dollar deal. It's a "nothing burger" -- the headline suggested (to me) that a major producer was getting out of shale. No, a company with its very survivability at stake is selling assets in last ditch effort to stay alive. Comstock Resources is likely to get a very, very good deal if it proceeds with buying the Haynesville assets. 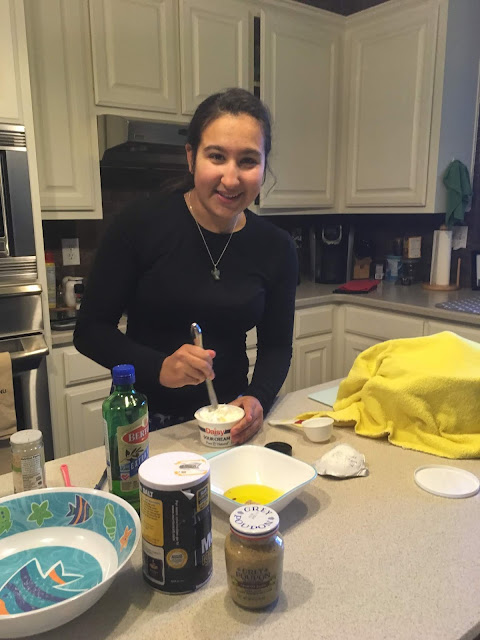 
By The Time I Get To Phoenix, Galveston Medley, Glen Campbell
Posted by Bruce Oksol at 12:51 PM No comments:

The clarity is incredible. Steve Jobs would be proud.

My two cents worth: DAPL operators offer North Dakota the opportunity to increase oil production, revenue, etc. Present the evidence that the engineering has been done and meets all standards, regulations. If "North Dakota" wants it, fine. If not, fine. And move on. Should take an hour, tops.

Is Fox the only network reporting this? That RBG had to leave work early due to "illness."
Posted by Bruce Oksol at 12:29 PM No comments:

Market: I followed futures overnight and all I saw was "red." So, now, with nothing else to do, I checked in on the market. Wow, wow, wow. Who wudda thought. All major indices again hitting new highs. And best of all, a stock I was following hit "my" buy point; and, coincidentally, dividends paid in the past few days allowed me to execute. Seldom happens. LOL.
Cold and flu season: RBG misses work due to an "illness."

Graphic updated here.
Posted by Bruce Oksol at 11:14 AM No comments:

The clarity is incredible. Steve Jobs would be proud.

My two cents worth: DAPL operators offer North Dakota the opportunity to increase oil production, revenue, etc. Present the evidence that the engineering has been done and meets all standards, regulations. If "North Dakota" wants it, fine. If not, fine. And move on. Should take an hour, tops.
Posted by Bruce Oksol at 10:25 AM No comments: 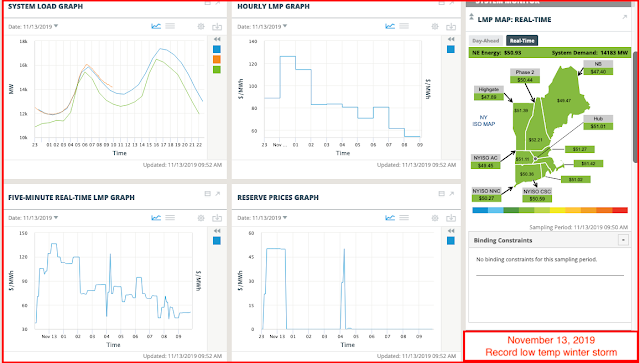 Another huge Petro-Hunt Charlson well was recently taken off line: 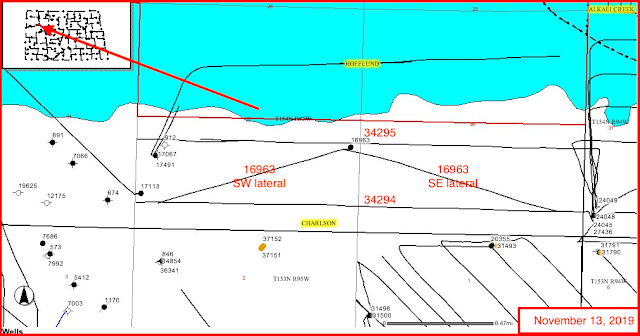 From an earlier post:
Note: neighboring the Wardner well above is this well:

This is not new but today was the first time I tried using it and it's awesome.

I often have large files to send to family members. Neither Yahoo!Mail nor Google Mail can handle the large files except by a cumbersome process.

Just out of curiosity, I tried Firefox Send this morning. Wow, best thing since sliced bread. I'm sure others have found ways to send their large files just as easily but it's hard to beat Firefox Send.

Several features:
Interestingly, my new MacBook Air with the factory-installed software makes it very, very cumbersome to download Firefox. It's not that big a deal, but it's interesting how Apple works so hard to keep their users in their eco-niche which makes sense to me, but is certainly aggravating. I generally use my older MacBook Air which works "flawlessly."

Politics: I believe I read last night/early this morning, while statistically within the margin of error, Buttigieg now leads in Iowa. Monmouth poll, 10/25 - 11/11:
Hillary: Buttigieg's surge could be "moment of truth" for Hillary. She said yesterday that "many, many people" are asking her to run (again). It is noteworthy that every time there's "movement" in the DNC primary, Hillary has a press release disguised as a news story ready to go. Dates to watch:
From twitter this morning:
Disney: if you want to see how Bob Igor is monetizing the Disney name, visit your local Barnes and Noble and visit the children's display for "Frozen 2." I mentioned the other day that DIS was the new momentum stock. There are others.

Disclaimer: this is not an investment site.  Do not make any investment, financial, career, travel, job, or relationship decisions based on what you read here or think you may have read here.
Posted by Bruce Oksol at 6:35 AM No comments:


Crude prices, trading at about $62 a barrel in London, may tumble almost 30% to $45 a barrel if the Organization of Petroleum Exporting Countries and its allies don’t announce deeper production cutbacks, according to Morgan Stanley. Citigroup Inc. and BNP Paribas SA predict a slide to the low $50s.

That would intensify the strain on group members like Venezuela, Iran and Iraq, which are already reeling from economic crises and political unrest. It would also ripple through the rest of the industry, hitting the shale boom that has transformed the U.S. into the world’s biggest oil producer.

“The prospect of oversupply looms over the market in 2020,” said Martijn Rats, global oil strategist at Morgan Stanley. “Either OPEC deepens its cuts, or prices will fall to about $45 a barrel, and force a slowdown in U.S. shale that balances the market.”

The Permian must be absolutely huge. Remember, estimates place it larger than Saudi Arabia's monster field.

IEA woke: wow, I couldn't believe the number of stories yesterday regarding the growth of US shale and the effect it will have on global markets (read: OPEC). At first, I thought it was a one-off, the story, I posted yesterday, but late last evening, I ran into story after story about US shale. From ArgusMedia, a great example:


US shale production is likely to stay "higher for longer", reducing the share of Opec members and Russia in the global oil supply, the IEA said in this year's World Energy Outlook (WEO). "Efforts to manage conditions in the oil market could face strong headwinds," it said.

In the WEO's Stated Policies scenario, which incorporates existing measures and announced policy intentions and targets, but "does not speculate on how these might evolve", annual US production growth "slows from the breakneck pace seen in recent years". But, the US still accounts for 85pc of the increase in global oil production to 2030, and for 30pc of the increase in gas. The US will produce more oil and gas than Russia by 2025 under this scenario, the IEA said.

In this scenario, US tight crude production grows from 6mn b/d in 2018 to just under 11mn b/d in 2030. The majority of this growth comes from the Permian basin in Texas, "which by itself produces more crude than the continent of Africa soon after 2030."

And, it's not going to slow down: 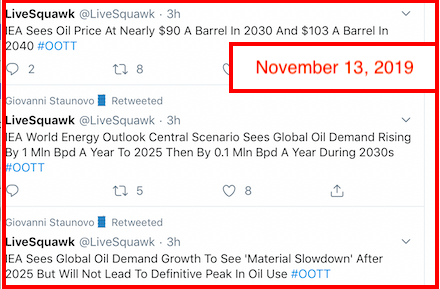 
Unceasing U.S. shale-oil production will reshape global energy markets in the years to come, bolstering the country’s influence over nations in the Organization of the Petroleum Exporting Countries, the International Energy Agency said Wednesday.

In its annual World Energy Outlook report, the IEA said that even as annual U.S. production growth slows from the pace seen in recent years, its forecast scenario for policies already announced mean that the country will account for 85% of the increase in global oil production to 2030.

My hunch is that Warren, Biden, Sanders, et al, want to stop this.

Perfect timing: along with the RBN Energy blog today (see below), oilprice has this headline: "Canada's oil giants are fed up with pipeline delays." Unfortunately there's not much in the story; mostly clickbait.


Wells coming off the confidential list today -- Wednesday, November 13, 2019: 46 for the month; 141 for the quarter:
RBN Energy: the outlook for gas supply, demand and pipeline egress from western Canada.


Limited natural gas export options and persistently weak gas prices are not new phenomena in Western Canada. But market conditions in the past couple of years have become particularly untenable. Western Canadian Sedimentary Basin (WCSB) gas supply has ratcheted higher and shows signs of further growth, even as its share of export markets has been shrinking with the rise of U.S. shale gas. In-region oversupply conditions have worsened, creating transportation constraints further and further upstream in the WCSB, and prices at the regional benchmark AECO hub have seen historical lows as a result. To deal with this, and perhaps provide a long-term solution to weak natural gas prices, pipeline egress will have to expand again after a decade of decline and stagnation. New takeaway capacity is now starting to be developed. The question is, will it be enough?

Today, we discuss the expanding gas pipeline options out of Western Canada, including when, where and how much takeaway capacity will be developed.

Canadian natural gas prices have been under siege from several angles in the past few years. First, the growth in U.S. gas supplies has been eroding Canada’s market share of its traditional export markets in the U.S. So much so, that Canada’s gas exports to the U.S. Northeast have effectively been displaced by Marcellus/Utica supplies, and those to the Midwest are being challenged by the expanding pipeline footprint out of the Marcellus/Utica as well. Canadian gas exports to the U.S. West appear to be safe for now, but they too could be coming under greater threat in the next few years as U.S. gas supplies continue rising. The end result of this growing gas-on-gas competition downstream has been deepening discounts for Canadian gas prices as measured by the AECO price benchmark.