Wow, it's been a long time since I've posted a music video.


Standing On The Edge, Hanne Boel
Posted by Bruce Oksol at 6:22 PM No comments:

Occasional-Cortez beings up a great point: couldn't "we" have saved a bundle of money and emitted less CO2 emissions if we had put the B-52's on the aircraft carrier in the first place, instead of flying them there?

Reminder: EIA dashboards:
Permian vs Bakken (both fields are quite mature now):

May 8, 2019: Saudi bases their price off Brent. California's major supplier is now Saudi.


California currently imposes the second-highest gas taxes in the country. A state excise tax currently adds $.417 per gallon, a rate that will increase to $.473 come July. On top of that, the state imposes a 2.25 percent gasoline sales tax.

As lieutenant governor, Gavin Newsom supported a 2017 bill increasing the state's gas taxes. When running for governor in 2018, he opposed a ballot initiative that would have repealed that same increase. It's 2019, and Newson, now the state's governor, is demanding an investigation into why the state's gas prices are so high.

API weekly inventory data: not as "bad" as the previous two weeks but yet another build. Even so, it was a fairly big build: 2.81 million bbls and well ahead of analysts' expectation of 744,000 bbls. Link here. We now wait to see if this build is corroborated by the EIA data that will be released tomorrow.


Last week:the API reported a surprise buildup in crude oil of 6.81 million barrels. A day later, the EIA reported an even larger build of 9.9-million-barrels.

The huge pipeline explosion in Iran? Just an accident -- while being repaired.

Later, 3:42 p.m. CT: a reader wrote to say that the graph below is misleading. Look at the y axis -- it starts at 0.8 million -- not at zero. I have to agree. When I initially saw the graph I did a double take -- I should have pointed that out when I posted it. My bad. 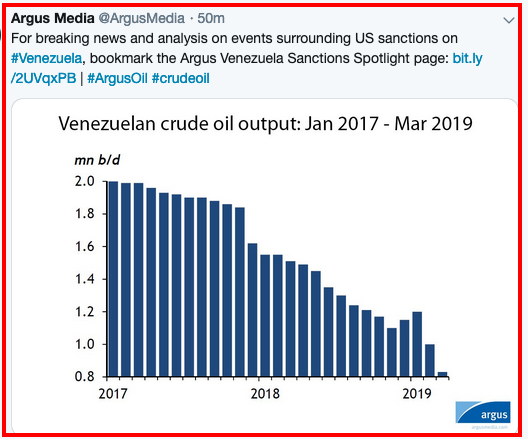 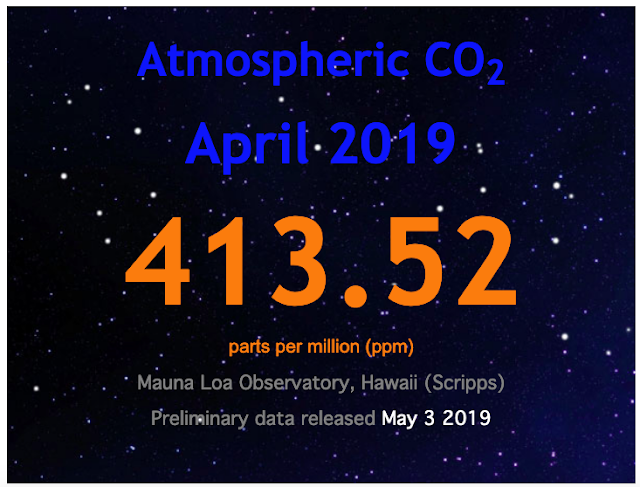 If the faux environmentalists turn out to be correct, 20-20 hindsight will show that giving China and India a pass on CO2 reduction was the big mistake. The western economies are cutting CO2 emissions but China continues to build coal plants not only in their own country but around the world.

On another note, things are getting really, really bad in Germany. From Forbes.  [By the way, when clicking on the Forbes link, good luck reading the article almost completely hidden by ads. Best thing to do: click on the link; then go somewhere else for a few minutes. A lot of the annoying ads will disappear. And be sure to click "mute" for the site.]


But Germany didn’t just fall short of its climate targets. Its emissions have flat-lined since 2009.

“The Energiewende — the biggest political project since reunification — threatens to fail,” write Der Spiegel’s Frank Dohmen, Alexander Jung, Stefan Schultz, Gerald Traufetter in their a 5,700-word investigative story (the article can be read in English here).

Over the past five years alone, the Energiewende has cost Germany €32 billion ($36 billion) annually, and opposition to renewables is growing in the German countryside.

How much transmission line was added in 2017, the most recent year for which data is available? 30 kilometers. Or 18 miles, about the distance from the south side of Williston to the 13-mile corner north of "boom city." LOL.
Posted by Bruce Oksol at 9:23 AM No comments:

Over at Macrumors today -- Angela Ahrendts fired/let-go/laid-off/retired after just four years or so -- and the daggers are now coming out  -- how the changes made in retail the last few years were a disaster for Apple. Regardless of design, Apple stores are chaotic, noisy, unpleasant. But I think folks are missing the bigger point: Apple may or may not need to re-design the stores, but they definitely need more stores in localities where they have stores. Some folks suggest separating their retail stores into two: sales and services. I'm not convinced. But one comment that I found similar to my own experience:


Maybe my local Apple store is just above average, but I like the changes. As soon as you walk in, someone asks you why you are visiting. If you need service, they enter you in the service queue and then you're free to roam around the store. If you need sales, they direct you to the product and enter you in the sales queue. In both cases, after a short wait an employee comes right to you and then helps you with the sales or service you need. I've done this several times and it's always been a much better experience than any other retail store I can think of. People always seemed to find the old genius bar confusing. While being helped, other customers would keep walking up to the bar and trying to squeeze in to get help. The 'bar' model didn't indicate there is actually a queue and someone will help you when it's your turn.


Switching careers and leaving fashion for a tech company made her "incredibly insecure," and she says she spent first six months at Apple "fairly silent" because she wanted to listen to get her bearings and gain confidence in her role.


Get in your lane, bring your gifts to the table, right? They don't expect you to learn - you're used to being the CEO in an industry that you grew up in for 30 some odd years. You're used to knowing everything. And now you go in at a senior level and you know nothing but no, wait a minute: You know what you do.

[Apple] was a titanic retail business at that point, with 55,000 employees all over the world. And so, okay, maybe I'm here because I'm a leader and maybe I'm here because I'm a brand builder. I wouldn't go as far as say visionary, but I thrive on looking out two or three years and feeling what's coming and warning everybody and uniting everybody around a strategy to be prepared for that.

According to Ahrendts, she learned three things during her time at Apple: never forget where you came from, move faster than you could ever fathom, and never forget that you have a greater responsibility.

When I read that, it sounds like Human Resources at Apple failed. Wrong person for the job. Six months to get her bearings? Are you kidding? Six months is, like, a lifetime in tech. A Harvard MBA program is only two years. Groves and Oppenheimer went from nothing to a nuclear weapon in about that time. And that was in 1943 when the only way to travel from Los Alamos to Chicago was by train.


The other day I was interested in the geography of the "waterways" around New York and New Jersey. I happened to be reading a biography of Richard Feynman (certainly you can't be joking!). He was born, raised in Far Rockaway, Queens, west end of Long Island. I can never remember the geography of that area. I was hoping to find a good book that would include the geography of this area. And then I remembered reading Valiant Ambition some time ago. I read it quickly, didn't pay much attention to it except to get the gist of the story. Now I'm going back and reading it slowly. first fifteen pages -- exceeds my expectations.

I was a bit confused regarding the boundary location of Queens / Brooklyn. It turns out I was not the only one. LOL. See this link.

While at the library I took the opportunity to catch up on The New Yorker. After decades of subscribing, I did not renew my subscription about a year or so ago. The magazine had become a mouthpiece for Hillary, and it remained so after the election. The editors clearly were textbook examples of those afflicted with Trump Derangement Syndrome.

So, yesterday afternoon, I grabbed all 2019 issues and went through them quickly. Below is my summary. There might have been all of four articles that have interested me. The amount of anti-Trump stuff is way down. Of course, the lead essay in each issue still revolves around Trump and/or Hillary. But, of course, it's The New Yorker.

Below I have focused on two things:

Drudge links a "new" poll -- Biden up 32 points over Bernie.

I track the polling here.The average does show Biden at 39 and Bernie at 15.5 but one poll has Biden at 46% and Bernie at 14%. The rest are running just to get on-stage to debate but it looks like "game over." It appears Buttigieg flamed out.
Posted by Bruce Oksol at 8:09 AM No comments:

Another Oasis Aagvik Well Coming Off Confidential Today -- May 7, 2019


Deal: Anadarko accepts OXY's new bid; Chevron has four days to counter-offer. Huge loss for Chevron is they lose this deal. Consolation prize: Chevron will get a $1 billion break-up fee. Part of the new offer cy OXY was to sell Anadarko's Africa assets to Total for $9 billion.

BA: Boeing fell almost $5 yesterday; looks like it will lose almost another $4 today.

Wells coming off the confidential list today -- Tuesday, May 7, 2019: 24 wells for the month; 119 wells for the quarter
The Oasis Aagvik wells are tracked here.


RBN Energy: factors affecting feedgas demand and LNG exports in 2019.
Posted by Bruce Oksol at 7:37 AM No comments: