This page won't be updated. The CLR Angus wells are tracked here; and, Angus Federal and other related wells tracked here. 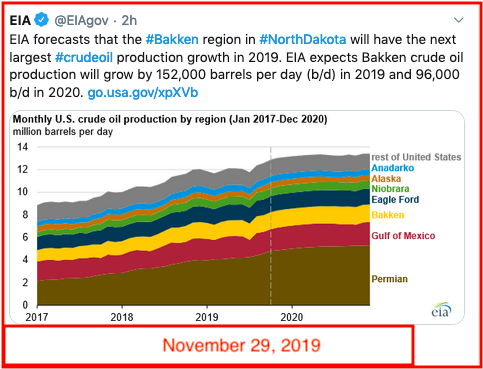 I'm taking the rest of the night off. Good luck to all. I won't be answering e-mail or comments.
Posted by Bruce Oksol at 7:01 PM No comments:

Yes, goalies can use their paws.

Thanksgiving Day in pictures.
Posted by Bruce Oksol at 6:52 PM No comments:

Did anyone catch this?

Some "experts"  now suggest we have only two years when it comes to global warming.


While major economies are yet to commit to extending Paris Agreement commitments, more than 70 countries, 10 regions and 102 cities, including California, New York State, Tokyo and Rio de Janeiro, have committed to work towards net zero emissions status by 2050, according to the UN.

Data gathered by Platts show the vast majority of emissions are focused on energy and transport, where cleaner technologies already exist and, in electricity generation at least, the costs are reaching grid parity after 20 years of support.

"Unless in the next one or two years countries double or triple their pledges and fully implement them, we won't meet Paris, and we will be on a pathway of greater than 2 degrees Celsius with profoundly negative consequences," Watson told the BBC on Wednesday.

"When the US pulls out it will make it harder to make 2 degrees, while sending the signal to the rest of the world that, if one of the richest counties can't be bothered, why should anybody else?" Watson said. [To be more precise, he "asked."]

This, by the way, will be the issue for the 2020 presidential election: global warming. 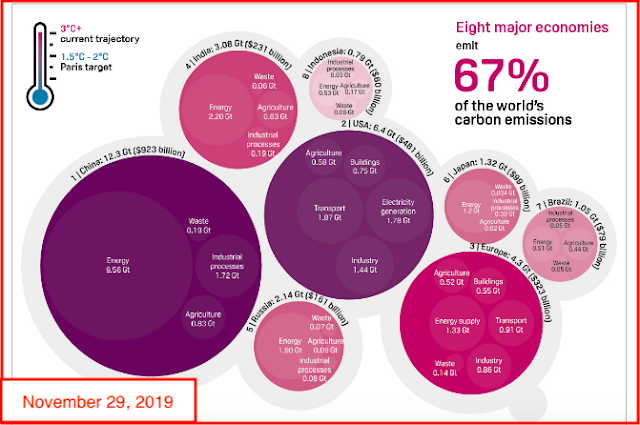 The "title": eight major economies ... can anyone name any major economy other than these eight?
Oh, I guess there's South Korea, and OPEC.


In 2018, China was the world's largest economy for the fourth year in a row. It produced $25.3 trillion in economic output according to estimates by the International Monetary Fund. It contributed 19% of the world's total gross domestic product of $135.2 trillion.

The European Union was in second place, generating $22 trillion. Together, China and the EU generate 35% of the world's economic output.

No other economy is even close to any of these three. The fourth-largest economy was India, producing $10.4 trillion. Japan was fifth, at $5.6 trillion. Germany, the strongest country in the EU, produced $4.4 trillion.

These measurements use purchasing power parity to account for exchange rate changes over time. It also adjusts for government rate manipulation. 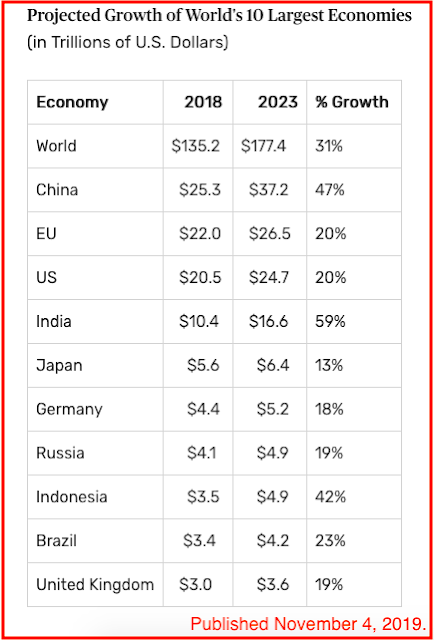 
The only item on today's daily activity report was fourteen permit renewals:

This page will not be updated. The CLR Carus wells are tracked here.

Off the confidential list today, this huge well:
Production:

Shell: thinking about side the box -- getting ready for a carbon-free world (LOL):


Faced with this conundrum, Shell has promised to halve its net carbon footprint by 2050 from the 2016 level. It has gradually moved away from oil toward lower-carbon gas and has been adding electricity to its product mix. It is also applying its trading and retailing expertise to products other than oil and gas. With 45,000 stores—more than Starbucks or McDonalds—Shell serves 30 million customers daily.

In recent years, the company also has invested an average of between $1 billion and $2 billion annually on small-scale experiments in new energy sources including power, biofuels, solar, wind, batteries and hydrogen. Most don’t make a profit, but don’t cost too much relative to the more than $20 billion a year that Shell generates in free cash flow.

The experiments give the company information about new markets and the opportunity to shape customer expectations and regulations as they develop. More speculatively, they could also provide a first mover advantage in lower-carbon businesses that might eventually deliver the big profits oil and gas investors expect.

But what I haven't seen yet, is even one EV charging station at Shell stations. What am I missing? So, let's check. Maybe I am missing something. There it is, over at shell.com:


Shell is excited to launch our electric vehicle program that will advance adoption of electric vehicles in California through the deployment of EV charging infrastructure at commercial, retail, public and government locations as well as multi-unit residential dwellings.

Shell is supporting the transition to electric vehicles by looking at how EV charging can be successfully integrated to the power grid. We have developed a new EV smart charging service called Shell RechargePlus that allows the charging of vehicles to be shifted to times when it would be most beneficial for the power grid and that will provide cost advantages for customers.

This new service is available to you when you select Shell as your service provider within the Pacific Gas and Electric Company EV Charge Network Program when you participate under the “EV Charge Owner” option.

Y'all know PGE -- the company that is blamed for starting some of worth wildfires in California's history.

I thought this was a joke -- that Newsweek was going to publish a story reporting that President Trump would be golfing over Thanksgiving. 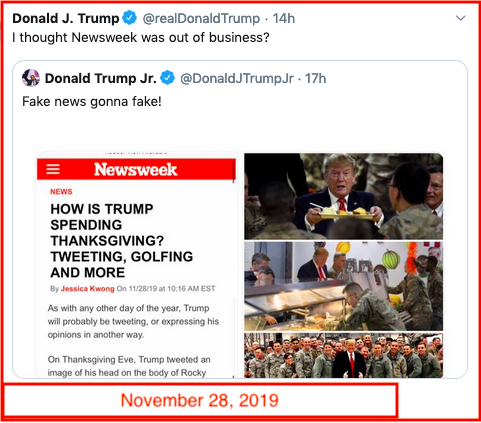 But, according to talk radio here in Texas, Newsweek had the story all written -- that President Trump had spent the Thanksgiving holiday golfing in Mar-a-Lago, holding the story until the "facts, dates, specifics" were filled in.

Apparently the "news" outlet had to scramble to write the "real" story once it was learned that he was in Afghanistan -- the first trip he has ever made to Afghanistan.
Posted by Bruce Oksol at 9:57 AM 2 comments:

Top retail picks for holiday season: Target, Five Below, and TJX Maxx parent -- Barron's. The analyst considers all three discounters. I'm not so sure about Target. Yes, compared to Best Buy and Tiffany, Target is a discounter, but I've always looked at Target as a "full-price discounter." LOL.

Apple AirPods Pro: without question, one of the best tech products ever to hit the market. Bar none. Stories everywhere. Here's two:
Reviews; generally speaking, Apple products get "bad / snarky" reviews on social media. For the AirPods Pro I'm not seeing many negative articles. Some folks are surprised people are willing to spend $249 for ear buds. I think these folks are unaware how much money is "really out there."

Olivia is now out in Los Angeles for a second soccer tournament this Thanksgiving week.

Last night she arrived in Los Angeles about midnight to join her regular team for a three-day national tournament. On this team she is playing "up." She is one year younger than the rest of her team.

Olivia and her mother spent Thanksgiving day in Louisville, KY, with the rest of the family and their other grandparents. So, it was DFW to Miami, to Louisville, to Los Angeles, returning to DFW Sunday night. And yes, she does have "frequent flyer" miles. LOL.

I will probably have to buy some carbon offsets to pay for all the CO2 emissions. Or maybe just plant a real Christmas tree this year.
Posted by Bruce Oksol at 9:48 AM No comments:

Peak oil? What peak oil? US September crude oil production at 12.463 million bopd vs 12.397 (revised up from 12.365) million bopd in August; about a half-percent increase month-over-month, but September numbers will probably be revised up also. STEO report forecast 12.59 million bopd for September. So, actual production came in at a bit less than projected. 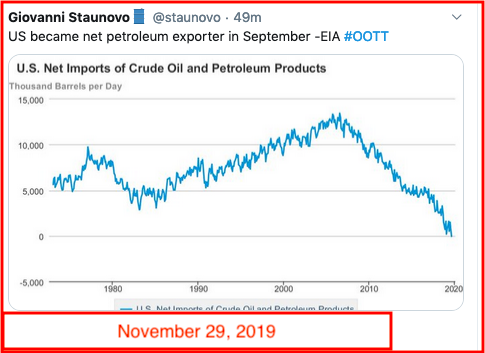 
In 2019, there has been a significant shift in crude oil and natural gas markets. Prices have remained stubbornly low, even when faced with the risk of significant turmoil like the Saudi drone attacks. Investors are far less forgiving, and energy-related equity values continue to lag most other sectors, despite most companies returning more of their earnings to shareholders. Oil and gas producers are focused on their sweetest of sweet spots, wringing every crumb of financial return from their investments. The risk-return equation has changed. All this makes now a good time to examine the strategies and tactics necessary for survival in this challenging phase of the Shale Era. That is especially true for the players who seem to be doing everything right, because some of the worst management mistakes can occur when performance is good.