The Bakken, The Eagle Ford, The Permian .... Now It's The Powder River Basin -- Motley Fool -- Peak Oil? What Peak Oil?

From Motley Fool via Yahoo!Finance:


The Permian Basin, which stretches across western Texas and the southeast corner of New Mexico, is the fastest-growing oil-producing region in the world. Output currently stands at around 3.3 million barrels per day (BPD) and has increased an astounding 800,000 BPD over the past year, which represents more than half of the worldwide production increase. That fast-paced growth, however, is about to come to a screeching halt because there is only enough pipeline capacity to move 3.6 million BPD. While the industry is building new pipelines as fast as it can, the current bottleneck could last until late next year.

Because the Permian expects to slow to a crawl in the next year, it's opening the door for the Powder River Basin (PRB) of Wyoming to emerge as the industry's new growth engine. That gives producers with land in the region a leg up on the competition, which is why investors should put this area on their radar.

Shale giant EOG Resources has been one of the leading developers of the PRB over the past few years. In May 2015, the company said that it discovered two formations in the PRB -- Turner and Parkman -- that contained high-return drilling locations. However, after increasing its return hurdle rate in 2016, only the Turner formation -- which holds an estimated 200 million barrels of oil equivalent (BOE) -- met its criteria to deliver a premium drilling return.

That didn't stop the company from continuing to explore its vast acreage position in the region. Because of that, the company was able to uncover two more formations that hold a treasure trove of oil resources. EOG announced these discoveries earlier this month, detailing that the Mowry and Niobrara shale plays held a stunning 1.9 billion BOE of recoverable resources, a more than tenfold increase. That put the PRB right behind the Permian Basin and Eagle Ford shale as the company's third-largest asset.

Much more at the link.
Posted by Bruce Oksol at 8:48 PM 2 comments:

I replied that I don't follow Montana -- I have enough trouble just keeping up with North Dakota. Years ago I posted fairly regularly on Montana but at the time I was getting my links and reports from a reader who was following Montana (I assumed he/she became a multimillionaire on oil, moved to Phoenix and is happily retired).

The reader noted that Kraken Operating reported three nice wildcat Montana wells; surface locations, not bottom hole locations:
A huge thank you to the reader for sending me this information. Kraken Operating is new to the Bakken (2016) and I'm just starting to learn more about them.

It's interesting that these wells were all considered "wildcats."

In the North Dakota Bakken we are starting to see increased interest in Tier 2 (and even Tier 3) locations, but much more interesting, are the number of wells targeting the lower benches of the Three Forks (the second bench and the third bench). It will be interesting if that interest spills over into Montana. But again, this reminder/caveat: the nature of the Williston Basin is such that most consider Montana on the western fringe of the Bakken. With that in mind, these appear to be very nice Kraken wells.

The market:
WTI: flat; but trading at a very, very nice level, almost $69

False story: CNBC political talking head says the "NAFTA" story / Mexico trade story is a fake story. The movers and shakers all know that. And yet the Dow jumps almost 300 points. And this is August. Should be the slowest month of the year.

I don't think I've ever seen her so "proud." She was the last to be dropped off. She rode in the car with her older sisters who were dropped off at high school and middle school. 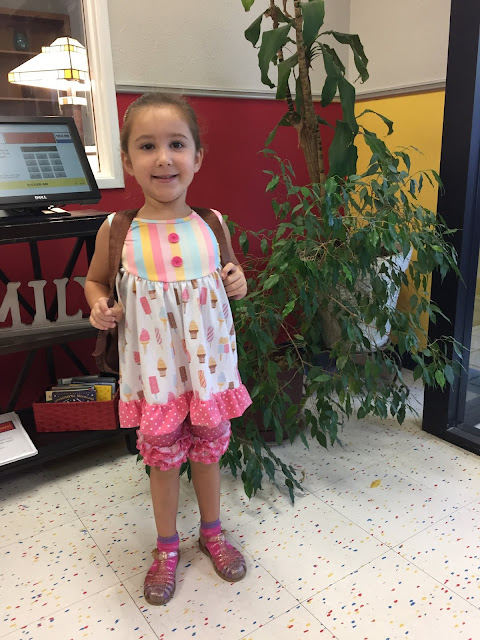 Two Mountain Gap wells coming off the confidential list today: one was a middle Bakken well; one was a Three Forks well:

Coming off the confidential list today:
Note: the number of stages. But still a lot of sand.

Global warming: passengers on grounded Arctic cruise ship to be flown back south. IceAgeNow.  "Ice-free by 2013" -- Algore. Now, the "drop-dead" date is 2050 -- USA Today. Mashable wavers: pushes the date out to 2100 and even then not sure the Arctic would be entirely ice-free. World Economic Forum says the Arctic is now expected to be ice-free by 2040. For a nice compilation of this inanity, see this link and scroll to the bottom.


On August 25, 2017, Hurricane Harvey made landfall as a Category 4 hurricane near the popular Gulf Coast vacation town of Rockport, TX, just east of Corpus Christi. Harvey was the first major hurricane (Category 3 or higher) to make landfall along the U.S. Gulf Coast since the devastating 2005 hurricane season that included hurricanes Katrina, Rita, and Wilma, and is tied with Hurricane Katrina as the most expensive storm ever to hit the country. Harvey also highlighted just how important the Gulf Coast refining and refined product pipeline infrastructure is to the rest of the U.S. Today, we mark the one-year anniversary of the devastating storm with a three-part series on Gulf Coast refining and pipeline infrastructure, and how a natural disaster along the coast can impact the rest of the country.

The U.S. Gulf Coast (USGC) is home to the largest centralized location of refineries in the U.S. with over 8.4 MMb/d of installed crude distillation capacity between Corpus Christi, TX, and southern Mississippi (Figure 1). To put that in context, the refineries along this 650-mile stretch of coast produce enough to meet about half of total U.S. petroleum product demand. These refineries convert domestic and imported crude oils into refined products that are used for a variety of purposes, including: (1) transportation fuel for personal passenger vehicles (i.e. gasoline and diesel); (2) transportation fuel for commercial purposes (i.e. jet fuel, diesel, and bunker/marine fuel); (3) fuel for home heating (i.e. heating oil); (4) intermediate products for a variety of other petrochemical industries that eventually turn into consumer goods (i.e. plastics, rubber, etc.); (5) asphalt; and (6) lubricants.