For all intents and purposes, these are wildcats, although they may not make the legal definition as such. 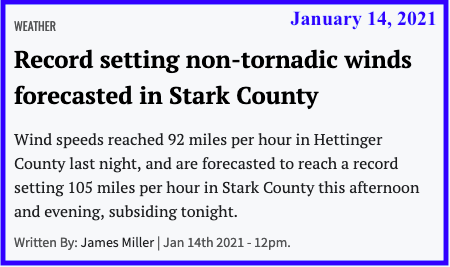 Apple Shipped So Many Computers This Past Year, They Literally Shut Down Automobile Production -- January 14, 2021

January 14, 2021: did anyone else catch this? Bloomberg: missing chips snarl car production at factories worldwide:

After first wiping out auto demand, the virus is now hindering parts supply: chips used in vehicles are harder to come by because semiconductor manufacturers allocated more capacity to meet soaring demand from consumer-electronics makers such as Apple Inc.

Could This Become A Bigger Story Than It Already Is? It Literally Feels Like A Race Against Time To Prevent A Disaster -- January 14, 2021

This story is being followed here.

Note: Sophia is making up the story that she is "reading" to her students. The "page" on the iPad from which she is reading is a blank page except for a single line from her Duolingo Spanish lesson.
Posted by Bruce Oksol at 9:25 PM No comments:

UK: Boris Johnson given bombshell warning -- lift the lock down or face leadership threat. Enough is enough. His days are numbered unless ... link here -- from MP who ousted Theresa May.

Chips: semiconductors in short supply -- The WSJ. When I first decided to add "chips" to the list of those things that I wanted to track in 2021, I had no idea this is where we would end up: a huge shortage. I was mostly interested in the Apple M1 chip. But now, the big "chip" story is the global shortage. Toyota has already shut down production in China due to the shortage and now says the shortages could continue through the spring. Look at this: Taiwan Semiconductor Manufacturing Co -- TSMC -- wow --

Semiconductor companies are asking their customers for patience as the industry works through a sharp increase in demand from makers of everything from cars to consumer electronics.

The chip shortage has caused prices to rise for certain semiconductors, delays in filling orders and auto makers to idle factories. If the problems persist, consumers may see delays in getting new cars and some electronic devices, and possibly higher prices.

There is no quick fix to the situation, either. Adding new chip-making machinery can be expensive and slow, and some of the deepest supply problems are taking place with older production lines that are less lucrative for manufacturers.

“In the whole semiconductor industry there is very little [spare] capacity right now—everything is doing well,” said Risto Puhakka, president of VLSIresearch, an industry-analysis firm. “We’re coming off a record investment year, and the demand continues to grow.”

Taiwan Semiconductor Manufacturing Co., the world’s largest contract chip maker, said Thursday it was working with the car industry to address critical shortages. Chief Executive C.C. Wei also said TSMC’s customers are likely to boost chip inventory to protect against future bottlenecks. The manufacturer said it was boosting capital investments by at least 47% this year from 2020 amid surging demand.

Demand for laptops has skyrocketed, and remote work during the Covid-19 era has increased appetite for cloud-computing services and the data centers behind them. On top of that, a surge in demand for chips that go into new 5G phones has put a squeeze on manufacturing capacity, chip companies say. And U.S. restrictions on Chinese telecom giant Huawei Technologies Co. led competitors to try to steal market share.

After first wiping out auto demand, the virus is now hindering parts supply: chips used in vehicles are harder to come by because semiconductor manufacturers allocated more capacity to meet soaring demand from consumer-electronics makers such as Apple Inc.

Toyota, the world’s No. 2 automaker, said the impacted lines were at its factory in Guangzhou, in China’s south. The suspension could result in a cut in January’s output of as much as 30% depending on how long it drags on, the Nikkei reported earlier Tuesday, without attribution. Toyota jointly operates the site with Guangzhou Automobile Group Co. Toyota is additionally lowering output of a pickup made in Texas.

Honda, which had to scale back output at its U.K. plant last week, said it will reduce manufacturing of the Accord, Civic and Insight sedans, as well as the Odyssey minivan and Acura RDX, a crossover sports-utility vehicle. The Japanese automaker is also reducing output by about 4,000 cars at a domestic factory, while Nissan Motor Co. is adjusting production of its Note hatchback.

VW said last month it would have to change manufacturing plans. Fiat Chrysler Automobiles NV is temporarily closing a Canadian plant and delaying the restart of output at a Mexican Jeep factory until the end of January.

In North America, Ford is idling a SUV factory in Kentucky.

Semiconductor-based components are set to account for more than 50% of a car’s manufacturing cost by 2030, up from about 35% now, according to a report by China EV 100 and Roland Berger.

Email ThisBlogThis!Share to TwitterShare to FacebookShare to Pinterest
Labels: NG_Plants_ND

Oil prices: a perfect storm (in this case, a good storm)? Did Saudi get it right time? Third time's a charm:

The Fed: from a conservative financial advisor / analyst at a major financial institution earlier today -- based on Jay Powell's comments today --

Crypto-mining: link at Aljazeera; also at Bloomberg, elsewhere: Iran's smog, blackouts made worse by power-sapping crypto-mining. Is this why Iran needs that nuclear energy? 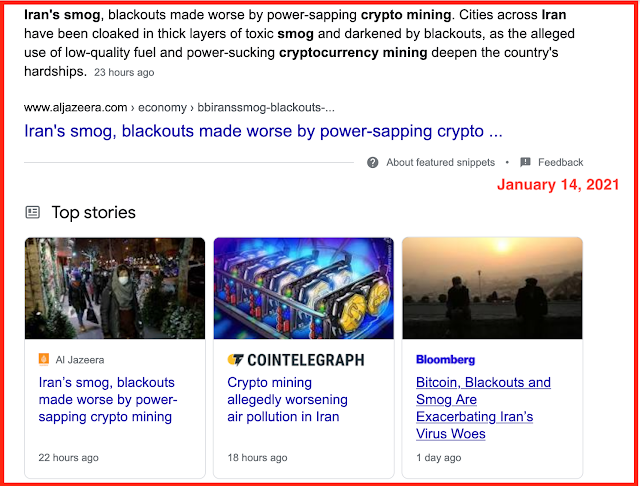 NYC rentals surge; up 94% in December. I assume this is month-over-month. Rental rates have come down significantly. CNBC. But the vacancy remains at a record.

First, the end of the "comfort animal" scam. Now the FAA steps in and tells the airlines: zero tolerance when it comes to "unruly behavior." Zero tolerance, masks, $35,000 fines, jail time on the table. All fallout from the storming of the Capitol last week.

Also, no longer can folks "check" firearms when traveling to Washington, DC.

These are temporary measures to expire March 30, 2021, but my hunch: "everyone" wants to seem them extended indefinitely. Why shouldn't there be zero tolerance for unruly passengers on airlines? This FAA directive also gives airlines "cover" from successive liability suits.

United is adding folks to their list of "banned from the airline forever."

Energy stocks: on fire. Every time I look up at the CNBC crawler I see familiar energy ticker symbols surging and I'm not using the word loosely. It is truly incredible. For example, I just noticed PSX, up 4% and pays almost 5%. 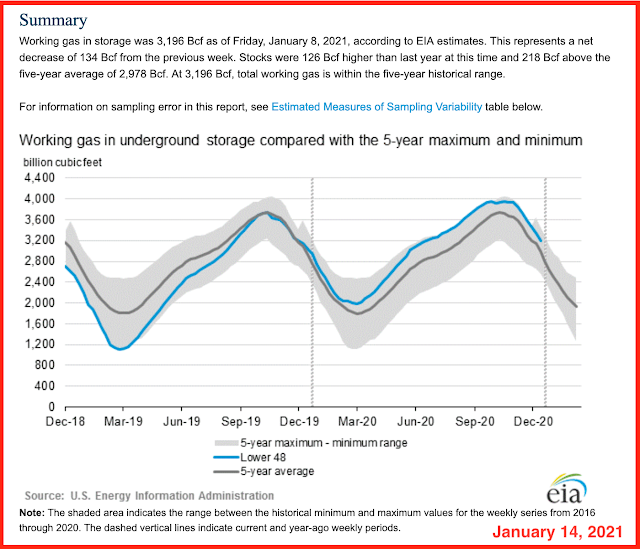 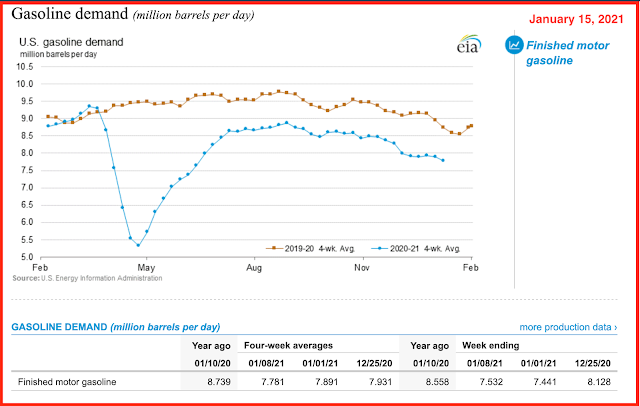 From The Bismarck Tribune, data points:

Hope springs eternal. The big question: where was MDU all these years? Why does it take an upstart to get this going? Why not Hess? Why not NDREC. By 2010 "everyone" was aware of the flaring issue. So, now, some fourteen years later, maybe a new power plant.

Questions unanswered that would seen not to be confidentiality issues:

Updates
Later, midnight,  January 14, 2021: before President Biden spoke, laying out his $1.9 trillion program to save the country, Dow future were down a bit; after he spoke, futures fell further, faster. It must have been the minimum-wage stuff.

The major indices, for the archives:

Vaccine: I get a kick out of the "news" yesterday that JNJ is falling behind in its ability to quickly get product to market. LOL. That's not the long pole in the tent: anecdotal reports from many states suggest that much of vaccine is sitting in refrigerators/freezers/warehouses and not getting into arms. A twitter note overnight said that in New York vaccination centers were open 24/7 but they see very few people showing up after midnight. If accurate, speaks volumes.

Syria: CNBC has a video-report that Jordan has begun vaccinating in Syrian refugee camps. Again, no numbers. Just a video and some superficial reporting, as if the photo-journalist had never seen vaccinations given before.

Unemployment numbers: another day where the unemployment numbers are reported and no one seems to care. Much like the Fed's minutes reported by Steve Liesman. At best there's an immediate reaction on Wall Street to these reports, and one hour later, the report is forgotten.

Dow: I forgot where I posted it but either in an e-mail last night to a reader or somewhere on the blog, I mentioned that the Dow came within a hundred points or so of hitting an all-time record yesterday.

Question: why is CNBC still quoting McConnell as the guy making US Senate decisions with regard to the calendar and the impeachment trial? Isn't Schumer now in charge?

Irony: CNBC is reporting that President Trump has a list of executive orders and a longer list of pardons ... but crickets from the White House. Banned from twitter and every other social media outlet, we have no idea what Trump is thinking. For the life of me, why can't twitter, et al, simply moderate all comments from certain parties that "might" be of concern? I do that on the blog. Makes a huge difference. Outlets that don't moderate comments are asking for trouble. This is not rocket science. Hey ... remember newspapers? Remember "letters to the editor"? Newspapers did not print every letter they got; they selected which ones they want to print. Same with The New Yorker: magazines print selected letters.

Fireside chats: likewise I am amazed that Trump is not having "fireside chats." He would have any number of radio / television outlets eager to air his "conversations."

Unemployment numbers: no longer mean anything on a week-to-week basis. May expand on this later.

RBN Energy: FERC's decision on the oil pipeline rate index is a win for midstreamers.

Just before the holidays, the Federal Regulatory Commission issued its final decision on the oil pipeline index rate for the next five years. The what?? Well, once rates for interstate oil pipelines are set and accepted by FERC, the rates can move around to match the market, but any increases are capped by an annual index announced by the FERC each year. The index is equal to the current year’s inflation rate, plus an “adder” that is calculated by the FERC every five years based on an examination of the industry’s results from the previous five years. In today’s blog, we explain how a few tweaks in the way FERC calculates the cost-of-service-based adder will significantly affect how much liquids pipeline rates can rise through the first half of the 2020s.