U.S. manufacturing expanded in July at the fastest pace since March 2019 as more factories boosted production in the face of firmer orders and lean inventories.

The Institute for Supply Management said Monday that its manufacturing gauge increased to 54.2 last month from 52.6. Readings above 50 indicate expansion, and the latest figure exceeded the 53.6 median projection in a Bloomberg survey of economists.

The data point to a steadier environment for producers, months after demand plummeted during the pandemic-related lockdown of the economy. Nonetheless, the pace of improvement risks moderating as the coronavirus stands in the way of a sustained quickening of demand.

From a reader, thank you.
Germany: solar sweeps the board again in renewables acution, May 20, 2020.
Link here.

Not one wind power project was submitted to the German network authority for the April round of a national clean energy procurement program. Almost 204 MW of solar generation capacity was allocated across 30 solar projects with an average final electricity price of €0.053/kWh.

Wind developers appear to have thrown in the towel in Germany with federal network agency the Bundesnetzagentur revealing it received no wind project bids for last month’s national solar and wind power energy auction, which procured 203.7 MW of solar capacity across 30 projects.

There is not one chance in a million that Germany will meet its 2030 renewable goals despite $billions poured down this rat hole during their "virus stimulus".

Microsoft, Apple lift NASDAQ to 29th record close of the year. What will propel the NASDAQ to hit 11,000? FOMO.

Clearing out the in-box after another incredible day in the market:
The dollar as reserve currency. Anyone reading the business pages know there is a lot of talk about the possibility that the US dollar will no longer be the global reserve currency. Okay. I'm sure a lot of folks bought into that. To say the least, I was quite surprised when I saw this:
Covid supercharges Federal Reserve as backup lender to the world.
Say what? The WSJ said it.
My hunch is that governments around the world are not only looking at the US as the the lender of last resort, but they are also looking to the US for guidance. I would assume -- well, let's not assume -- let's look it up:
By the way, if "we" get through this "Covid thing," my nominees for the 2020 economics award would be a joint award to Steve Mnuchin and Jay Powell for "melding economic theory with practical applications to save the global economy."
*********************************
Endurance: GM Electric
Lordstown Motors to merge with DiamondPeak, link here;
********************************
Preparing For School Testing
Sophia took an on-site computer test last week for "grade" placement. In anticipation of the test, in which she was required to wear a mask, we practiced at home for two days prior to the day of the test. 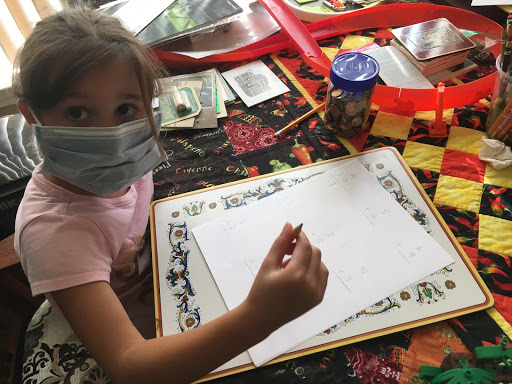 COVID-19 is an aggressive and contagious virus, found to have high mortality especially in persons with comorbidities (age>60, hypertension, diabetes mellitus, cancer, and otherwise immunocompromised).

Zinc is a supplement with possible antiviral properties, having been shown to have effect in the common cold, many of which are due to coronavirus.

In addition, elderly patients and patients with co-morbidities have high incidence of zinc deficiency.

We are repleting zinc in all patients and studying its direct effect in combination with hydroxychloroquine, and an antibiotic, either azithromycin or doxycycline to see if there is enhanced treatment efficacy in early COVID-19 infection and assess the safety of these two regimen.

Re: zinc.
From one source -

Zinc supports the production and maturation of white blood cells, which are the major players in the immune system. There are multiple types of white blood cells, some of which make antibodies, capture and destroy pathogens, and return the immune system to normal after an infection. Zinc also helps to regulate inflammation. While an inflammatory response is necessary to fight infection, the overproduction of pro-inflammatory cytokines early in the infection is responsible for some of the worst symptoms of COVID-19. The review describes evidence showing that zinc may have an anti-inflammatory effect in pneumonia, limiting the damage to lung tissue. For decades, scientists have known that zinc can block the replication of rhinoviruses responsible for respiratory infections in people, including the common cold. Higher levels of zinc in cells help block the reproduction of rhinoviruses and stimulate interferon alfa production. This signaling molecule prompts nearby cells to initiate their anti-viral defenses. The review also found evidence specific to coronaviruses. One study showed that zinc blocks the enzyme responsible for replicating the coronavirus that led to the SARS outbreak of 2002.

Interestingly, chloroquine — which some people suggested as a treatment option early on in the pandemic – increases the cells uptake of zinc, which may underlie some of its positive effects. A 2020 study showed that when doctors treated patients with zinc and hydroxychloroquine, they discharged more patients, and fewer people died from COVID-19 Foods high in zinc include animal products, such as beef, shellfish, dark-meat chicken, and fortified breakfast cereal. However, beans, nuts, and seeds also contain zinc. Phytates in vegetables and grains can reduce the absorption of zinc and, therefore, vegetarians and vegans may need 50% more zinc in their diet.

Re: Covid and those with underlying co-morbidities -- add "vegans" to that list.
Question: What can vegans do to get off the list of "underlying co-mordibities" and Covid-19?
Answer: McDonald's once a day and a Weber grill / t-bone steak on the weekend. This is not rocket science.
Sources of zinc:

Zinc is a water-soluble nutrient - so you need to replenish it every day. Here's what you can eat to get 100% of your daily requirement - eat the item on one line and you're set:

The refinery deal is a bigger deal than folks realize. Another loss for California. I assume North Dakota is watching closely.
Re-posting:
Posted by Bruce Oksol at 10:24 AM No comments:

Note: we have a new "well status" designation in play. Wow, it never quits:
Fast and furious:
Apple, Inc:
Saudi Arabia:
********************************
Back to the Bakken
Active rigs:
Wells coming off confidential list --
Monday, August 3, 2020: 4 for the month; 75 for the quarter, 521 for the year:
Sunday, August 2, 2020: 3 for the month; 74 for the quarter, 520 for the year:
Saturday, August 1, 2020: 3 for the month; 74 for the quarter, 520 for the year:
RBN Energy: northeast gas takeaway constraints loom this fall.
The Northeast natural gas market this past spring and early summer averted a major meltdown, as production shut-ins, record cooling demand, and increased outflows helped the region balance. But the fall shoulder season is liable to be less forgiving, given that storage levels are much higher and carrying a surplus to prior years. Now, shut-in wells are back online for the most part and production has surged.
In-region demand has been at record highs, but summer cooling demand will peak soon and give way to balmy fall weather. As that happens, the Northeast will increasingly rely on outbound flows to offset a growing supply imbalance. But pipeline capacity utilization for routes moving gas out of the region have been running high already. How much incremental volumes can the takeaway pipelines absorb before constraints develop and hammer regional supply prices? Today, we analyze flows and capacity out of the region.
Posted by Bruce Oksol at 9:21 AM No comments: