I told the reader who sent me this article:

But I am posting it because it will be great for the archives, something to look back on 10 years from now.

So many story lines, but not worth the effort.

From an earlier post:
US Crude Oil Production Forecast 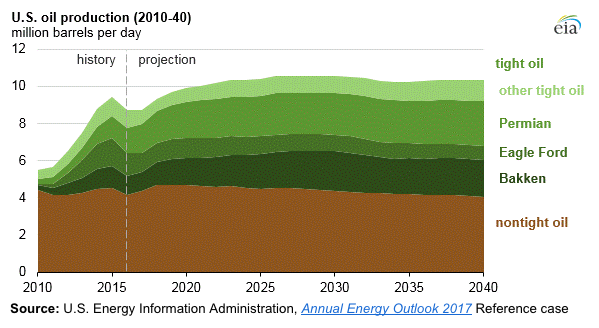 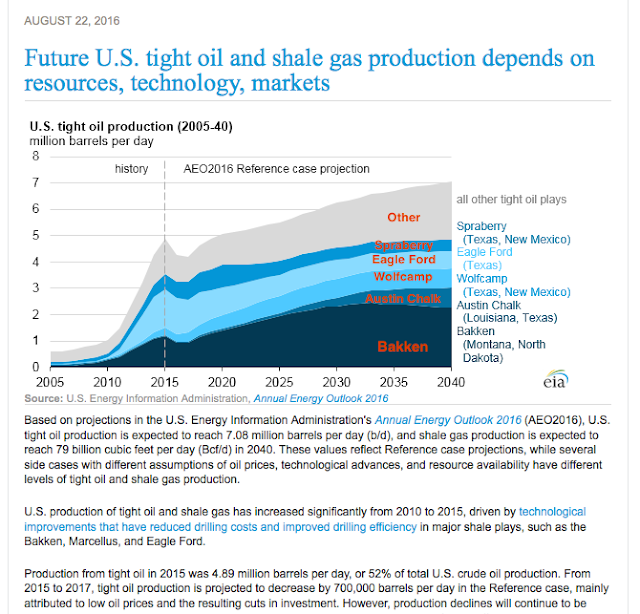 Note the amount of dark blue (Bakken) vs the Wolfcamp (blue).
Posted by Bruce Oksol at 8:46 PM No comments:

December, 22, 2017: a reader noted I had the wrong production chart for one of the wells; that has been corrected. More important were his comments regarding these wells:

Not bad for 4 months from a well that was put on production almost 9 years ago and had produced a total of 138,952 BBLs in that life  span if I am reading this correctly. [I've posted the full production history for this well at this post: note the production after the original frack and the huge amount of production after the re-frack.]

So how much potential is out there with old wells that can be re-fracked? [A rhetorical question.]

The reader goes on:

The Bakken has a lot of negatives based on the northern climate work environment and the distance to markets compared to southern US Basins. But on the other hand it looks like the updated frac jobs are using a lot of water. And the Bakken is sitting in the middle of a large lake on the Missouri River. It will take some effort to put in an underground distribution system with pumping plants on the lake to provide water for frac jobs and water flood secondary production but I bet in the coming years we will see that.

Original Post
For newbies: this is an important post to help understand the the potential of the Bakken. I'm not going to go into it again but important concepts that are not being talked about by analysts with regard to the Bakken: total organic content (TOC); original oil in place (OOIP); multiple formations in the "Bakken": primary production; life history of Bakken wells that will produce for 30+ years (workovers; mini-re-fracks; neighboring fracks; re-fracks; microseismic arrays)

This well came off the confidential list today:
Bridger/Bonneville wells have been updated. 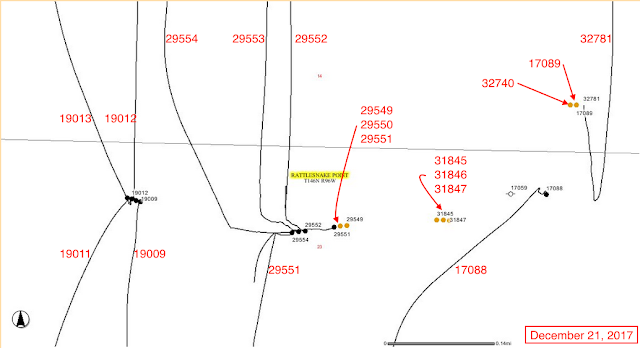 Many updates, including name changes (change in formation targets) with the Bridger/Bonneville wells. Regardless of whether wells were re-fracked or not, the important point to note is that many older Bridger wells have had a significant jump in production.

According to FracFocus this well was not re-fracked:
Monthly Production Data for #17088: 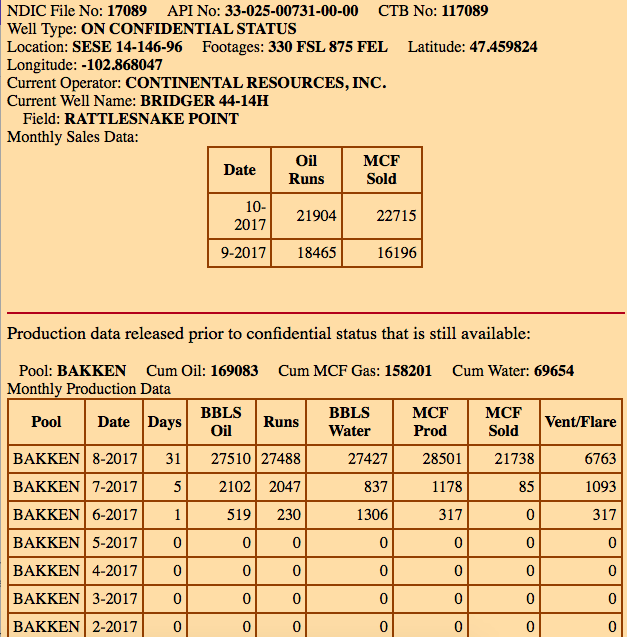 Likewise, this well showed a jump in production, but no evidence that it was re-fracked:
Monthly Production Data for #19012:

No producing wells (DUCs) reported as completed:.
Posted by Bruce Oksol at 3:37 PM No comments:

How Does The Los Angeles Times Deal With Trump's Huge Legislative Win; Clearly Besting Anything His Predecessor Acoomplsihed -- The Political Page, T+334 -- December 21, 2017

Does a tree falling in a forest make any noise if no one hears it? How does The Los Angeles Times handle the president's greatest legislative win? Ignore it. By now, one would expect a several-page analysis of the tax bill. The LA Times? Nothing.

One way to keep the government open a bit longer: POTUS has the authority to delay payment of foreign aid for a temporary period of time. He cannot completely cancel it but he can delay it. Foreign aid is part of the annual budget and is re-negotiated annually, as I understand it.

This article was linked "high" on the Drudge Report. I really had no interest in clicking on it but I was curious why it had been placed in such a prominent position by Drudge.


Nearly a year into the Trump presidency, Univision anchor Jorge Ramos says he’s experiencing “the worst moment I’ve had in the 34 years I’ve been living in the United States.”

Ramos, who proclaimed himself “if not an enemy, an opponent” of Trump in the interview, complained about the massive blowback he has received since deciding to use his media platforms to openly oppose the choice of over 62 million American voters in last year’s U.S. presidential election.

In the interview, Ramos continues to contend that Trump “was speaking about me” “he insulted me” along with the entire immigrant community in the U.S. on June 16, 2015 when during his presidential campaign announcement speech Trump slammed the lax border security that had permitted criminal elements from Mexico and other countries to illegally enter the United States.

Ramos might reflect on how 50% of Americans who voted, who supported Trump, feel about being called "deplorables" by Hillary.  And the "deplorables" Hillary was talking about were American citizens, not criminal elements coming across our open borders.

Posted by Bruce Oksol at 7:00 AM No comments:

Not-ready-for-prime-time: e-mail to a reader earlier this morning --


1. The new tax bill is a $1.5 trillion package -- this is very much like a $1 trillion infrastructure bill that Trump has wanted. And unlike waiting for "shovel ready" projects (held up by CAVE dwellers), the $1.5 trillion starts getting disbursed as of January 1, 2018.

2. Remember when the US corporate tax was 35%, but everyone on CNBC said that the "real" rate paid by US corporations was significantly less due to loopholes? Well, CNBC has noted that again this morning: the new rate is 21% but one can imagine that US corporations will find ways to lower that tax rate, also. Just like the individual: I'm in a certain tax bracket but after deducting deductions/credits, etc., my effective tax rate is definitely lower.

$58-WTI: oil falls as UK North Sea pipeline moves closer to restart. And that was about it. Not much reason to read the story. The headline says it all.

Saudi budget: previously posted but this story has a slight bit more information. AP is reporting that Saudi Arabia heralds biggest spending plans yet amid deficit.

Illinois: the state lost one resident every 4.3 minutes in 2017; dropped to 6th most populous state. Most populous states: CA, TX, FL, NY, Pennsylvania, and now Illinois. Retirement system of Illinois now on the hook for $120 billion. Illinois was the very first state noted by the blog facing doomsday; that first post was posted February 24, 2010. Some of the posts from that page:

Posted by Bruce Oksol at 6:19 AM No comments:


EnLink Midstream Partners LP, seeking to offset declining natural gas production in the Barnett Shale — where the master limited partnership (MLP) has extensive midstream holdings — has been implementing a strategic plan focused on acquisitions and expansions in the burgeoning STACK play in central Oklahoma and in the Permian’s Midland and Delaware basins in West Texas. The level of investment the plan requires has prevented increases in the MLP’s distributions to unit holders for nine consecutive quarters, which in turn has left EnLink’s share price languishing at about half of its 2014 high. The MLP has reported promising signs of growth in Oklahoma and the Permian as well as increased utilization of its southern Louisiana infrastructure, which it says could lead to a higher distribution to unit holders in 2018.