These wells are on the Fort Berthold reservation; west side of the lake, all run under the water.

The well:
Other wells on this pad:
Of the three parallel wells just to the north, this one is closest to #36393:
The other two wells on this 3-well pad:

Quick: the origin / etymology of the sailing term, "starboard"?

Is everyone paying attention? Are you catching all this? 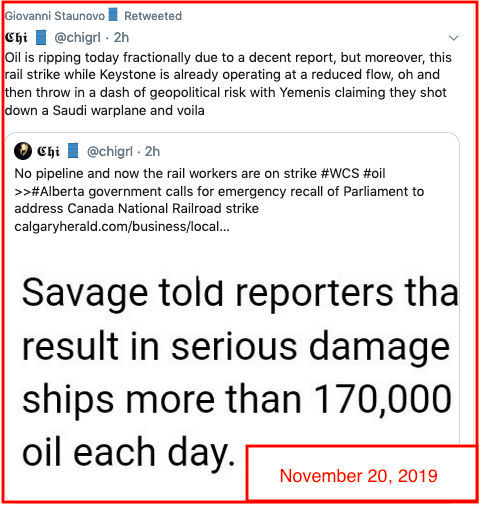 I doubt anyone in Ottawa is all that concerned about Alberta. Do Ottawans even speak the same language as Albertans?
Posted by Bruce Oksol at 1:10 PM No comments:

This post won't be updated; the CLR Carus wells are tracked here.


Production and data from the file report for this well:

The November, 2019, dashboards have been posted, with projected data through December, 2019.

A lot of takeaways here:
The links:
Bakken: 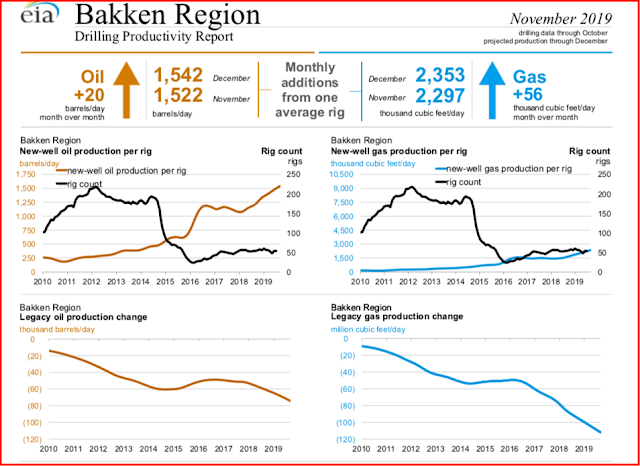 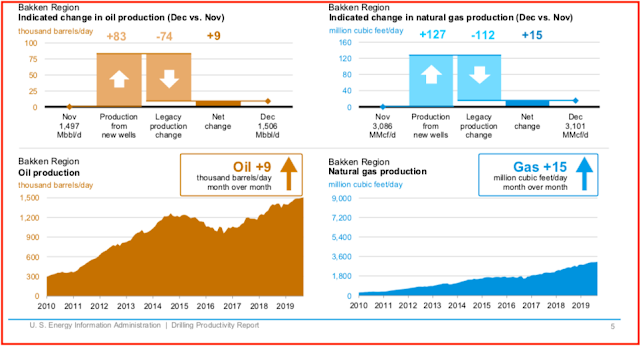 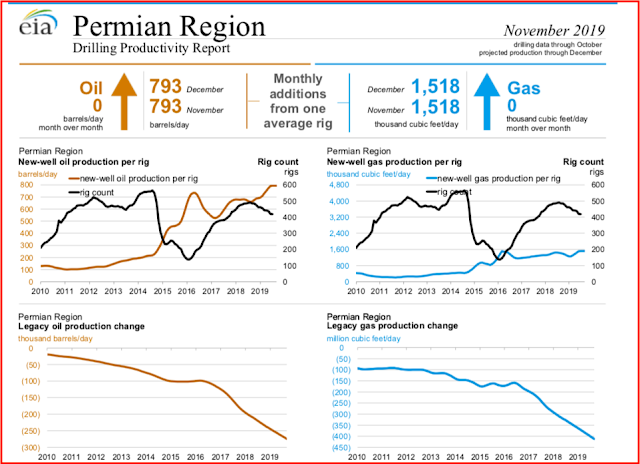 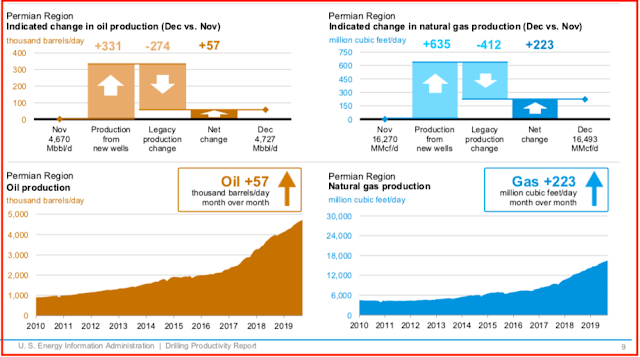 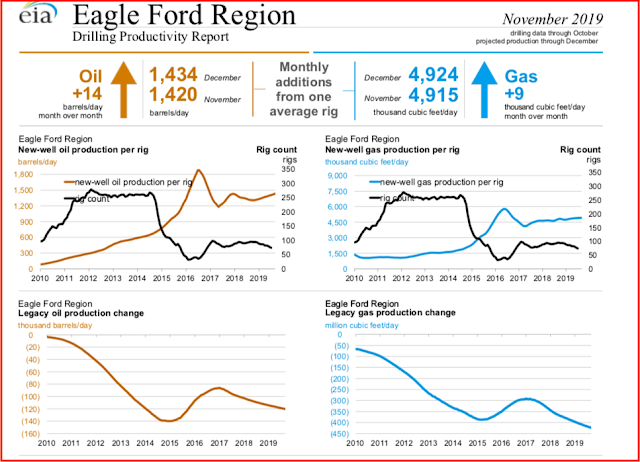 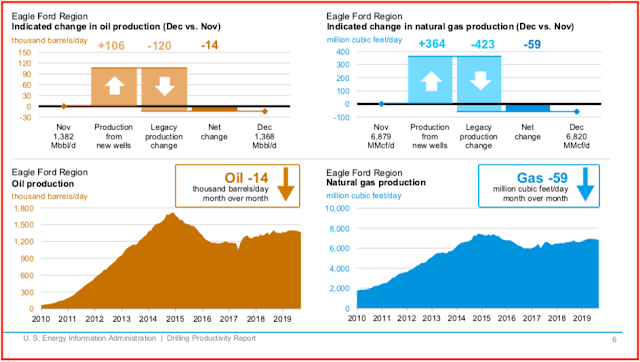 Years and years ago I began a very, very intense reading program, chronologically from Homer through Ovid to the great female writers of the 18th century and culminating with Virginia Woolf. It a while to move onto the great 20th century male writers to include Joseph Conrad, Graham Greene, and Ernest Hemingway.

Along the way I read George Eliot's Middlemarch. It was there that I followed the history and etymology of "marches." Had I not spent so much time on "marches" during and after reading that book, it is likely I would have completely skipped over this sentence (bel0w(, not thinking much about it.


Charlemagne's authority, and that of the Christian Church, reached its limits at the Saxon marches, in the northeast of the Frankish kingdom. Beyond lay the territories of the Ganes and the ...

Marches: another word to add to the list of vocabulary words I have developed for Arianna.
Posted by Bruce Oksol at 10:18 AM No comments:

I posted this data yesterday.


This may be the big story coming out of the Director's Cut for September, 2019, data: the number of wells off line for operational reasons (DUCs and "inactive" wells):

Others are now posting it, including The Williston Herald and The Bismarck Tribune:

North Dakota saw a jump of more than 400 wells idled from August to September. Now the state has 2,100 inactive wells, a number that’s concerning to Helms as the state is trying to put in place greater safeguards surrounding idle wells to prevent companies from abandoning them and shirking their cleanup responsibilities.

Helms attributed the change, in part, to the wet weather and producers shutting in some lower-producing, less-profitable wells ahead of winter. He said some of the idle wells could also be the result of companies that handle the pipeline and processing side of the natural gas industry moving away from accepting what’s known as “sour” gas. Sour gas contains higher concentrations of hydrogen sulfide, which can be poisonous to humans who breathe it.

Older oil wells that have been operating for decades tend to have more hydrogen sulfide than newer wells, given the geologic makeup of the rock formations they target, Helms said. But even some newer wells in western North Dakota are showing higher concentrations as companies experiment with larger hydraulic fracturing treatments.

“They started sometimes fracking out of zone into neighboring formations that have hydrogen sulfide in them,” Helms said.

If the DAPL expansion is denied, operators in the Bakken will see just how serious North Dakota is about promoting the oil sector.


On the question of why raiding on northern Britain began in 793, and not fifty years earlier or forty years later, Norwegian historians and archaeologists have been increasingly attracted in recent years to an idea that looks outside Scandinavia for an explanation and takes into account the political tensions in northern Europe at the close of the eighth century.

The three major political powers in the world at that time were the Byzantine empire in the east, which had survived the break-up of the Roman empire and its disappearance in the west; the Muslims, whose expansion during the years 660 to 830 under the Umayyad and Abbasid caliphates had taken them eastward as far as Turkistan and Asia Minor to create an Islamic barrier between the northern and southern hemispheres; and the Franks, who had established themselves as the dominant tribe among the successor states after the fall of the Roman empire in the west.

The Byzantine empire, with its capital Constantinople, was remote from the Sandinavian lands and would be more or less able to dictate the terms of its encounters with the Viking phenomenon.

The Islamic expansion into Europe via the Iberian peninsula in the first half of the eighth century pushed European trade routes northwards, a developement which increased trading opportunities for the Scandinavian lands and also created ideal conditions for piracy in the North Sea area.

Of tth three major powers it was the Franks who would be most profoundly involved with the Vikings.

And, although it's a stretch, if one connects enough dots, one will end up here:


Denis, Blondie
Posted by Bruce Oksol at 9:31 AM 4 comments:

US shale rocks! US shale will keep breaking records -- oilprice.

Mark Perry talked about this years ago. Do we have another nominee for the Geico Rock Award? Jimmy Sengenberger enlightens us: how US student debt became such a big issue.

Graphic panic. This is a keeper. Warren Buffett probably has a copy hanging in his bedroom. Screenshot to follow. 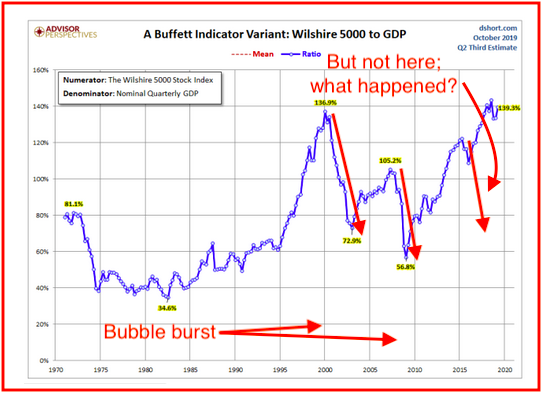 End of an era. Re-posting. From Bloomberg via Rigzone --


California is one step away from banning drilling for oil in their state. Meanwhile, the state has commissioned a multi-million dollar study to find out why gasoline prices are so high (a study that is undertaken every several years, usually when a new governor takes office). I find the whole thing fascinating, if not bizarre. 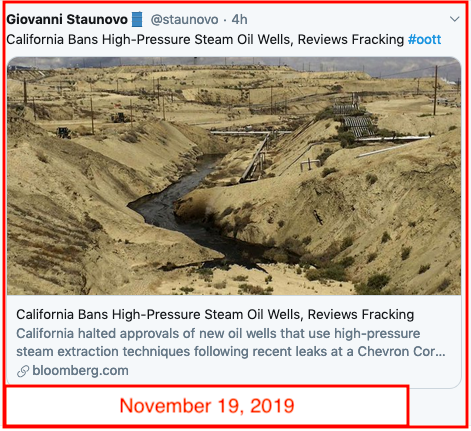 Big plans: COP unveils its 10-year operational plan. From Rigzone.
Disclaimer: this is not an investment site.  Do not make any investment, financial, job, career, travel, or relationship decisions based on what you read here or think you may have read here.

4% is not nearly enough. From Rigzone, update on Encana's proposed plan to flee Canada --
Only one piece missing: names of speakers. LOL. 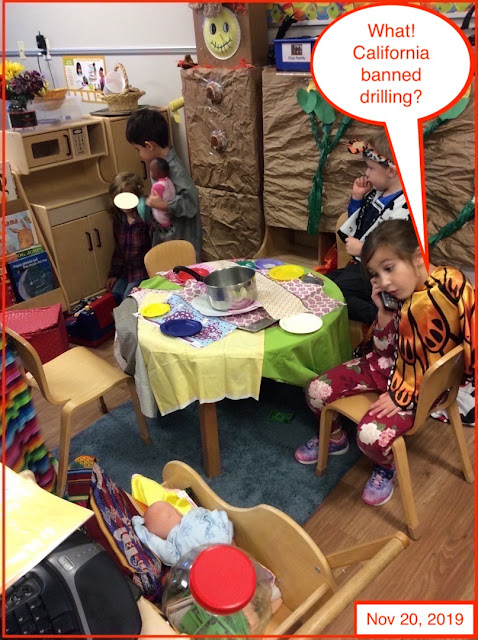 Maybe The Bakken Really Is Shut Down -- Daily Report From Yesterday Still Not Posted -- November 20, 2019

NDIC still reporting 55 active rigs in the Bakken, so apparently someone is working.


U.S. natural gas prices are increasingly susceptible to periodic spikes and volatility as baseload demand for gas — or the minimum level of demand that must be met on a daily basis — specifically from power generators and liquefaction plants, has rapidly climbed in recent years, and is still rising. The power sector has upped the ante on its gas consumption, with gas replacing coal as the most cost-effective go-to fuel for meeting baseload electricity demand. On top of that, feedgas deliveries to LNG export terminals have added 7 Bcf/d of demand to the gas market in the past three years, much of which is flowing at high, baseload-like rates, and that demand is set to increase further as more liquefaction projects are completed. These two market components together — LNG exports and gas-fired power generation — will take a bigger slice of domestic gas supplies, making the gas market ever more sensitive to weather, maintenance and other factors that disrupt that baseload level of demand or the supplies that serve it. We’ve already begun to see the effects of this phenomenon on Henry Hub and other regional gas prices. Today, we delve into this fundamental shift and what it could mean for the gas market.