Diversified Oil & Gas. Wiki. In case this name comes up again some day. Robert Hutson bought his first natural gas well in 2001. He now has 60,000 wells across the Appalachian Basin. What a great country. I guess he could have bought a corner "7-11" or a Dairy Queen or a Waffle House but instead bought a natural gas well. Headquartered in Birmingham, AL, and listed on the London exchange, had revenues of $400 million in 2020 with a net income of ($24 million) in 2020.

The article is all about the Permian. We went through this "debate" in the Bakken some years ago. For a number of reasons, the Bakken is ideally suited for 20,000-foot laterals but interestingly enough, the standard remains 10,000 feet. Maybe we will see the industry move to 20,000-foot wells in the Bakken somewhere down the road but after several years, it certainly seems the 10,000 lateral is the way to go in the Bakken.

On the other hand, the technology might be there, but anyone watching the Permian understands why super-long laterals have not yet become the standard.

By the way: when it comes to cost, the long pole in the teepee is not the drilling -- it's the fracking. From my limited perspective, the focus needs to be on completion strategies, not drilling.

According to Daryl Koo, head of oil asset intelligence for energy consultancy Enverus, in the core Delaware Basin Wolfcamp-A formation, the breakeven WTI price of a well decreases from $38/b to $34.50/b when going from 5,000 foot to 10,000 foot laterals.

"Though we didn't model a 15,000-foot case given it's still an emerging design, I'd expect the breakeven price to further decrease to around $31-$33/b, assuming no major issues with production or cost performance," Koo said.

Break-even prices: regardless of the length of the lateral, did you see the break-even in the Permian? $40 / bbl and less. And WTI is over $60 right now. Put that in your pipe and smoke it.

Scientific American: I haven't subscribed for decades. This is why. Marathon Petroleum Corporation has announced plans to install five 2.3 megawatt wind turbines that will provide electricity to its renewable diesel facility near Dickinson.

MPC contracted with One Energy, which will own and operate the turbines. They are expected to generate more than 40 million kilowatt hours of energy each year, providing approximately 45% of the renewable diesel facility’s electricity needs. Marathon will pay a fixed price for the wind power delivered by One Energy for a period of 20 years.

MPC Executive Vice President of Refining Ray Brooks said the project is a win for lower-carbon fuels and company performance.

“Lowering the carbon intensity of the renewable fuels we produce at our Dickinson facility helps us to capture additional value in the markets we serve and enhance the overall sustainability of our operations," Brooks said.

Lowering the carbon intensity of renewable fuels produced at the Dickinson facility also aligns with MPC’s objective of reducing its companywide greenhouse gas emissions intensity by 30% below 2014 levels by 2030.

One Energy CEO Jereme Kent said the project will also contribute to MPC’s role as a good neighbor in Dickinson. He said his company intends to offer annual scholarship opportunities to students pursuing a technical career.

“For each turbine, One Energy will provide a $5,000 ‘Megawatt Scholarship’ to local high school graduates pursuing two- or four-year degrees in science, technology, engineering or math," Kent said. "That’s $25,000 for every year the turbines are operating.”

This is another one I thought would not get approved.

The ND Public Service Commission approved a crude oil pipeline conversion project this week that can serve as an alternative route for North Dakota oil producers to deliver Bakken crude to market.

The Bridger Pipeline project originates near Johnson’s Corner in McKenzie County, and runs 29.4 miles southwest to Bridger’s Wilson Station located seven miles south of Watford City where it interconnects with Bridger’s existing crude oil transmission network. The projects consists of 2.4 miles of new pipeline and the conversion of an existing 27-mile gathering line. The $21 million, 8-inch pipeline project will be capable of transporting up to 50,000 barrels of oil per day to a Wyoming hub, which interconnects with other pipelines that would move the crude to refineries in the Midwest or Gulf Coast.

PSC Chair Julie Fedorchak noted that the pipeline runs through some rough terrain prone to landslides, but said she is comfortable that the company is familiar with potential hazards and is prepared to deal with them.

Bridger Pipeline, a subsidiary of True Companies, is seeking to place a new transmission line in McKenzie County, which the company says in its permit application could be a “vital part of an alternate route out of North Dakota in the event of a shutdown of other pipelines leaving the Williston Basin.”

The application does not mention any particular pipelines, but there will be a hearing on April 9 to discuss a potential shutdown of the Dakota Access pipeline, while further court-ordered environmental study of the pipeline is conducted.

Bridger’s proposed 29.4-mile, 8-inch crude oil transmission line would take crude from Eighty Eight Oil company’s existing Johnson’s Corner Terminal in North Dakota to Bridger’s existing Wilson station, about 7 miles south of Watford City. From there, the oil would travel to Wyoming, where it could access other markets and refineries in Utah and Colorado, as well as trading centers in Cushing, Oklahoma and Patoka, Illinois.
Note, on that date, this information:

Imagine if this required federal approval. 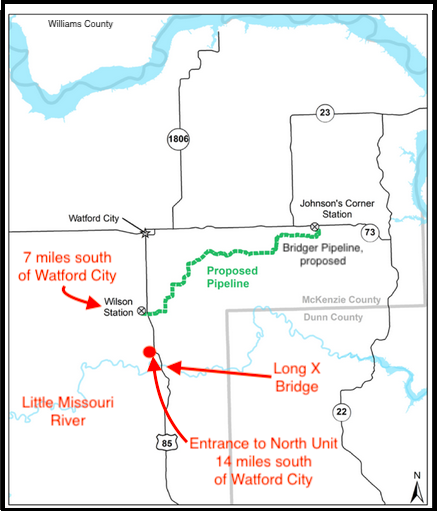 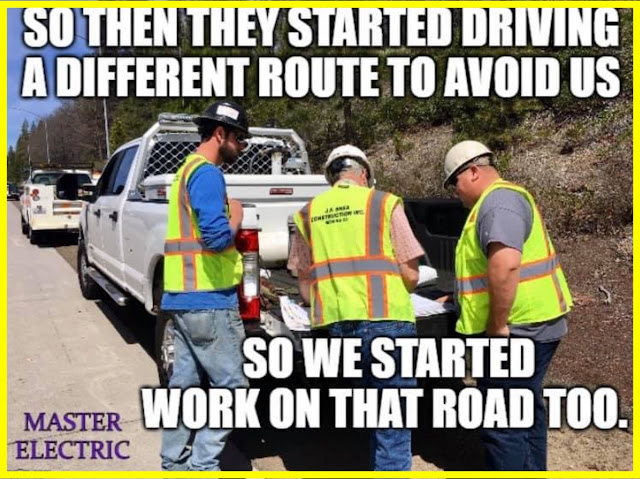 Covid-19 vaccine update: as of 6:45 p.m. CT, the CDC has not updated its daily report. It is generally posted by 2:00 p.m. on weekdays, and generally early on Saturdays and Sundays. 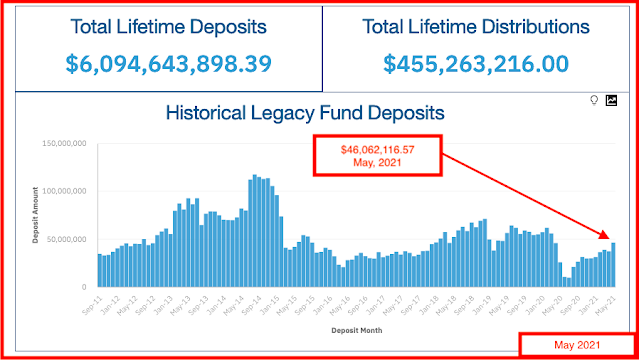 May 25, 2021: is the US Army Corps of Engineers' EIS even needed any more? Did the judge's decision make that issue moot?

A federal judge today issued an order rejecting the request of the Standing Rock Sioux Tribe for an injunction that would have shut down the Dakota Access Pipeline while an environmental review is conducted.

Judge James Boasberg, who had previously ruled the initial environmental analysis was inadequate thereby invalidating DAPL's easement to cross the Missouri River, issued a ruling today that the tribe had failed to demonstrate a likelihood of irreparable injury from the pipeline's continued operation. The judge's 31-page opinion expressed frustration with the Corps of Engineers' inaction, despite the fact that, as Boasberg put it, "the pipeline was ... an unlawful encroachment on federal land."

"Even though this Court vacated the easement for DAPL to cross beneath Lake Oahe, and even though the D.C. Circuit affirmed such vacatur, the pipeline has maintained operations as if none of these developments had occurred," Boasberg wrote. "Those seeking an explanation for the persistence of this surprising state of affairs over the past ten-odd months need look no further than the Defendant in this case: the Corps."

At a previous hearing on the tribe's request for the injunction, Boasberg was visibly annoyed by the Corps' reluctance to take a position on shutting down the pipeline. It's apparent from his ruling today the judge is still irked by the Corps' unwillingness to order that the flow of oil in the pipeline be stopped.

"Ever since this Court’s vacatur order in July 2020, and across two presidential administrations, the Corps has conspicuously declined to adopt a conclusive position regarding the pipeline’s continued operation, despite repeated prodding from this Court and the Court of Appeals to do so."

Boasberg's decision allows the pipeline to continue to operate because the tribe's arguments didn't pass the traditional four-factor test for a plaintiff: (1) that it has suffered an irreparable injury; (2) that remedies available at law, such as monetary damages, are inadequate to compensate for that injury; (3) that, considering the balance of hardships between the plaintiff and defendant, a remedy in equity is warranted; and (4) that the public interest would not be disserved by a permanent injunction.

Paywall. Will look to find another source also.

https://www.inforum.com/business/energy-and-mining/7039507-Standing-Rock-loses-federal-court-ruling-on-DAPL-judge-allows-pipeline-to-keep-flowing
This was critical for Oasis and many others.
Link to SeekingAlpha here. I have not yet read the article.

I'm tempted to move to Bakken_5.0 but we will see where we are a few months from now.
I wish I had the numbers just prior to the decision, but let's see where some Bakken operators finished: 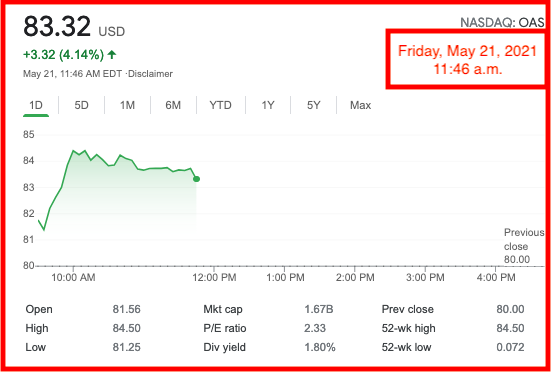 From SeekingAlpha, link above:

The U.S. District Court for the District of Columbia rules the pipeline may remain in service even though it lacks a valid federal easement for a water crossing in North Dakota.

The Army Corps of Engineers has said it expects to finish a court-ordered environmental impact statement for the project in spring 2022, and today's ruling appears to mean DAPL will not have to shut down while the analysis is conducted.

Energy Transfer is "dramatically undervalued" over the longer term based on its continued free cash flow strength, The Value Portfolio writes in a bullish analysis newly posted on Seeking Alpha.

I lost a huge bet on this one.

How in the world could the judge rule this way when the pipeline lacks a valid federal easement?

Will the US Supreme Court step in?

The Colonial Pipeline fiasco is probably on everyone's mind.

Posted by Bruce Oksol at 2:56 PM No comments:

Absolutely Amazing! PGA Championship -- Second Round -- Phil Mickelson Leads By One Stroke Late In The Day -- May 21, 2021

Hard to believe. Who wudda guessed? Three bogeys on the back nine or he might have been four strokes ahead going into the clubhouse.

Oosthuizen is now tied with Mickelson, -5, and playing a bogey-free round, as he goes to the twelfth hole.

Later: and that's how today's round ends: Mickelson and Oosthuizen tied for first place, both at -5. Pretty amazing to see Mickelson at the top of the leader board.

When you see those who made the cut and those who did not, whether you like him or not, it really does highlight how incredible Tiger Woods was "back in the day."

In calendar year 2020, Oasis had only thirteen permits:

Something tells me, Oasis has a bit of catching up to do.

The spreadsheets below have not been updated.


Meanwhile, back in calendar year, the year before the Covid-19 pandemic lockdown: