I posted this over at "Cabinet" shortly after Donald J Trump was elected president thinking it would be relevant / important at some later date:

I posted that "chain of command" so that folks reading the story at The Williston Herald updating the DAPL could keep the players straight.

The green light is on for the red-lighted Dakota Access pipeline, but the picture is still murky when it comes to how things will unfold from here.

A memo prepared by the U.S. Army Corps of Engineers sometime in December and contained in the paperwork filed Jan. 6 in U.S. District Court helps shed some light on what may occur, and also contains information that has, until now, been veiled from public view.

An official with the agency could not be reached to verify the exact timeframe of its preparation, but the memo references a December 2, 2016, meeting with the tribe in its conclusions, and Assistant Secretary to the Army Jo Ellen Darcy’s announcement was made December 4, 2016.

In the nine-page memo, Col. John W. Henderson of the Omaha District wrote that denying the easement would require a finding that the crossing was inconsistent with some aspect of the authorized purpose of the Lake Oahe project, or violated some other required parameter. An Environmental Assessment had already shown the former not to be the case, and Henderson lays out the remaining parameters that were met point by point.

The memo also mentions a December consultation with the tribe, held to discuss additional safety precautions that could be taken at the disputed crossing, as well as the risks in light of those additional steps and whether to issue the easement.

The three points are close in wording to what was ultimately published in a Federal Register notice that announced the start of a public scoping session for an Environmental Impact Statement to consider alternate routes.

Craig Stevens, with the MAIN Coalition, said the memo clearly shows that politics overrode an open and transparent public process, superseding it by political decisions that lay outside the known regulatory process.

“This memo demonstrates that the Army Corps of Engineers worked diligently — and in accordance with the law — to ensure the Dakota Access Pipeline was sited and constructed in the most environmentally and culturally sensitive manner possible,” he said.

It also showed, Stevens said, that the U.S. Army Corps of Engineers was going to issue the easement in December, until the Obama administration intervened.

“It’s now clear, and certainly unfortunate, that former assistant secretary of the Army, Jo Ellen Darcy, and other appointees in the Obama administration blocked the Corps’ work purely for political reasons,” he said. “We are pleased that President Trump is clearing the way for this and other important energy infrastructure projects to move forward.”

Much more at the link.
Posted by Bruce Oksol at 10:51 PM No comments:

This  past week, I've entertained a discussion on the rebalancing supply/demand crude oil issue at several posts: here; here; and, here;

For the archives: the stock market (Dow 30) hit 20,000 on the third full business day of President Trump's presidency.

From the HAL earnings conference all: not a single asset outside the US that competes with US opportunities.

Pipelines
With President Trump's executive orders, Keystone XL and DAPL back in play

Miscellaneous
Halcon selling it Eagle Ford assets to buy acreage in the Permian
Break-even costs for sale drop to $30/bbl
Happy 51st birthday to an Enduro Operating well
Posted by Bruce Oksol at 8:28 PM No comments:

Over at Bakken Operators, note:

Poll -- Who Do You Think Initiated That Hour-Long Telephone Call This Morning? -- January 27, 2017

As I watch UK PM Theresa May at White House press briefing, one can't help remembering that the following have had strong women leaders:
and, many others. But not the US. Just an observation. Not a "value" comment, just an observation.

That "canceled' meeting between POTUS and POMEX? Not so fast. They had an hour-long telephone call earlier this morning. I think folks need to put this whole North American "family" spat in context. If one actually reads President Trump's tweet prior to the canceled meeting, one actually gets to the nub. Something tells me that it will take very, very little to bring POMEX and POTUS together on this issue. Very, very little.

One wonders who initiated the phone call.

Two steps forward, one step back. That's what the POMEX-POTUS "flap" feels like.

I haven't watched the HBO television series in a few weeks, but this really, really reminds me of Julia Louis-Dreyfus in "VEEP." The latter is a 30-minute sitcom that shows a Vice-President and a staff who consistently find themselves "stepping in it" and then figuring out how to recover. Both in the sitcom and in real-life, things move at lightning speed. The politicians need to stay ahead of the narrative that the media will provide by the end of of the day.

In the real-life POMEX-POTUS flap, one can imagine that in the background, Trump's staff spent hours (days?) putting together the agenda and the logistics of the Trump - Nieto meeting. Everything was literally in place. All that was left to do was to start brewing the coffee.

But then, out of nowhere, the president can't sleep, gets up early, tweets an "unfiltered" note about who is going to pay for the wall.

An hour later, the alarm clocks of his staff ring, and literally the alarm bells go off. Bannon is laughing; Ivanka is hysterial; Jared is on the phone. Melania is driving Baron to school, completely oblivious. For the next hour, Trump's staff is busy trying to "recover"; trying to reach Nieto, and trying to get things back on track. Meanwhile, other staff members reach Trump and thirty minutes later, they arrange an hour-long telephone call.

My hunch is Trump's staff knew that POTUS needed to have that conversation. Who called whom? I'm not sure that's the big question. I think the bigger question is: was there an intermediary? If there was, who was it?

I track list of potential new LNG export facilities at this site.

Over at Crain's, an update on the LNG export market, with an Exelon case study. Data points:
Exelon:

Disclaimer: this is not an investment site. Do not make any investment, financial, travel, job, or relationship decisions based on what you read here or what you think you may have read here. Data points from Motley Fool:

Yesterday we saw a surge in first time unemployment claims, up 22,000, far surpassing what analysts had forecast.

Let's see the data on "gasoline demand" over same period.

Wow, wow, wow! Look at the incredible plunge in "gasoline demand" over the past couple of weeks. The steep (negative) slope of the curve is truly amazing, when the backdrop is the media narrative of an improving economy.

Remember: gasoline is at historically, ridiculously low prices. The price of gasoline is not driving demand down. 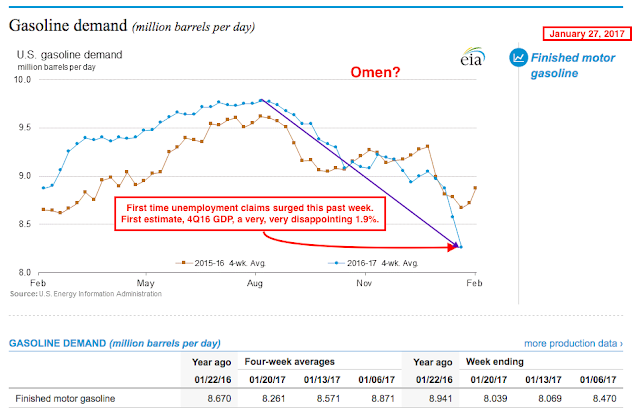 The graphic compares current data with data from one year ago.

By the way, when looking at the graph above, put that in context with the first estimate of the 4Q16 GDP: it came in very, very weak, at 1.9%; below 2.4% expectation; and, that was less than the 2.9% predicted earlier in the month.

Later, 11:25 a.m. Central Time: that "canceled' meeting between POTUS and POMEX? Not so fast. They had an hour-long telephone call earlier this morning. I think folks need to put this whole North American "family" spat in context. One wonders who initiated the phone call.


Original Post
Futures: again, this has been quite fascinating, watching futures go from "red" to "green" but not by much; and, then all of a sudden, at 7:01 a.m. Central Time, futures jump from 4 to 29 points in early trading (CNBC). After GDP report comes out, Dow 30 goes "red."

Proppacalypse: frack sand demand on fire in 2017 -- Rigzone. Mike Filloon predicted this at least a year ago. Data points:
Proppants 101: for newbies -- a primer on sand.

Fracking sand, some data points from linked posts above:
New player in the oil patch: Bloomberg's take on the GE-Baker Hughes merger.


A major component of the formula used to set the price of Maya—Mexico’s flagship heavy crude, and a key staple in the diet of many U.S. Gulf Coast refiners—was changed earlier this month, raising new questions about this important price benchmark for nearly all heavy sour crude oil traded along the U.S. Gulf, and points beyond. The change came as Maya production volumes continue to fall, and as Maya is facing increasing competition from Western Canadian Select (diluted bitumen) from Western Canada. Today we conclude a two-part series on Maya crude oil, the new price formula and its potential effects.

As we said, in Part 1, Mexico currently produces about 2.2 million barrels a day (MMb/d) of crude oil, about half of which (~1.1 MMb/d) is exported—three-fifths of which goes to the U.S.  P.M.I. Comercio Internacional S.A. de C.V. (PMI) is the crude oil marketing entity of state-controlled Petróleos Mexicanos (PEMEX) and manages the export of four distinct quality grades of crude oil, ranging from Altamira (an asphalt grade) and Maya on the lower end of the quality spectrum, to Isthmus in the middle, and Olmeca at the higher end. Most of Mexico’s crude oil exports to the U.S. Gulf Coast are Maya blends, as Mexico tends to retain most of its lighter grades (Isthmus and Olmeca) for domestic refinery consumption. However, the share of Maya exports headed for the U.S. has been falling fast—from 78% in 2013 to only 44% through the first nine months of 2016; the share of Maya bound for Europe has more than doubled over the same period and the share shipped to the Far East has more than tripled.

Canadian heavy sour crude oils such as WCS and Cold Lake are similar in quality to Maya but have historically been priced at significant discounts due to transportation constraints to reach the U.S. Gulf Coast. Should the Keystone XL Pipeline or other similar pipeline projects be constructed, the availability of these heavy sour crude oils in the Gulf Coast region could increase significantly, leading to more competition for Maya, more downward K factor adjustments, and higher volatility in the Maya price—all to the benefit of heavy-sour crude refiners. As previously discussed, PMI seems to be anticipating this eventuality and has been diversifying its Maya export destinations. Stay tuned for how these and other future events could impact the Maya pricing formula.

Posted by Bruce Oksol at 5:59 AM No comments: