From wiki:  The Crown Prince of Saudi Arabia is the second most important position in Saudi Arabia, second to the king, and is his designated successor.

Prince Mohammed, 31, replaces Muhammad bin Nayef as the heir-apparent to King Salman, 81, who assumed the throne in January 2015. Bin Nayef, a nephew of the king's, was also removed as deputy premier and interior minister.

No reason for the replacement was immediately announced, but Prince Mohammed, not Bin Nayef, was tapped to meet with U.S. President Donald Trump at the White House in March, a meeting that was widely hailed as a success in Saudi Arabia.


A World Of Our Own, The Seekers
Posted by Bruce Oksol at 11:54 PM No comments:

Don't Forget To Remember Me, The Bee Gees
Posted by Bruce Oksol at 11:27 PM No comments:

I originally posted this story as one of several stories 'cause I thought it had simply to do with Saudi Arabia. In fact, it was a story on global reserves.

What I find amazing, is that very few folks in America will even learn that the US now surpasses Saudi Arabia in crude oil and liquid petroleum:

This is all due to the Bakken. Period. Dot.

Memo to self: remember to send note to Jane Nielson.

This was the BeeGee's first #1 single.

The year I met the love of my life.


How Can You Mend A Broken Heart, The Bee Gees
Posted by Bruce Oksol at 11:03 PM No comments:


Re-posting: connecting the dots -- Hess sells NM Permian assets; considers ND Bakken its core. If the price of oil fails to come off recent lows and trend back toward $60, it is very likely that the number of active rigs in North Dakota will fall once again. However, one theme of the blog has been that the Bakken is actually better for some operators than others, and that was validated to some extend by the news that Hess sold its Permian assets in New Mexico ($600 million) to focus on the Bakken and two off-shore plays. These are the advantages I see for the Bakken right now vs the Permian:
Amazon: disruptive. This comes on the heels of my long meandering note about Amazon earlier today; and, also this long meandering note on Amazon.


".... landing the curve on target in the Three Forks 2 interval on 6/9/2017. During trip out of hole prior to running intermediate casing, it was determined that the 9-5/8" surface casing had parted. Due to the location and severity of the part, it was determined the most prudent course of action was to P&A the well." Original permit: Bohmbach 5-26H2, Three Forks, second bench, 2560-acre spacing; 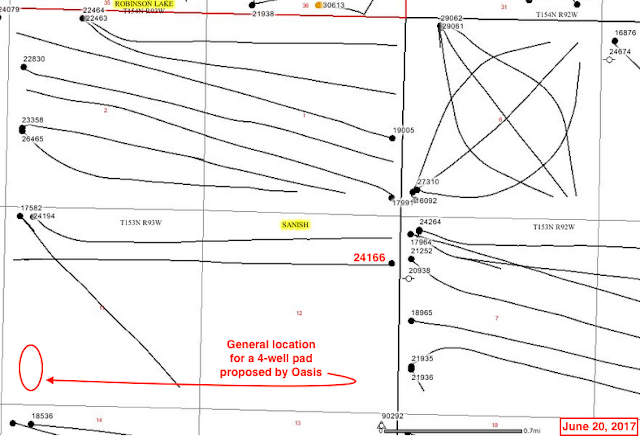 I find the hysteria about the Amazon - Whole Foods hook-up fascinating. I was part of the hysteria the day it was announced. Since them, plenty of time to think about it.

I did not care for this article; the writer seemed not to understand the current US laws on monopolies.

But this is how I see Amazon:

According to the linked article Amazon controls 40% of internet cloud computing. Its only real competitor might be Alphabet/Google. Ankle-biters would include Apple, Microsoft, Yahoo, Facebook, others.

Anyway, back to Amazon Prime and cloud computing.

How does Whole Paycheck fit into Amazon?

There's a lot of talk about all the reasons Amazon bought Whole Paycheck.

Readers can connect the dots. For Jeff Bezos, it's always been all about the customer.
Posted by Bruce Oksol at 2:38 PM No comments:

I've talked about this before. CNBC has challenges with "turning on a dime."

When big stories break, CNBC reacts, but it's takes a few days or even weeks to flesh out the story.

Like any network show, the producers need time to put it together. The deadline is a "rolling deadline." The general theme for any day is being developed one to two weeks before the day the show is aired. About a week before the program is to be aired, interviews are set up, and 48 hours to 72 hours those interviews are finalized. Finally, on the date the program airs, the interviews go live. The journalists are on-scene -- locations were scouted out one to two weeks earlier. That's why networks "love" hurricanes, not tornadoes. The former provide one to two weeks for networks to prepare; tornadoes allow no preparation.

So, today a lot of time is spent on stories that are the old, old stories: tax reform, Tesla, REITs, infrastructure, manufacturing, etc.

But, in fact, the big story is WTI going below $43. That story trumps (no pun intended) every other network story right now. No one really believes we will see any meaningful tax reform this year (although "no one" could be really, really long). But regardless of what any talking head says about "tax reform" the fact is WTI below $43 is the big story of the day.

One talking head said oil below $43 is a mixed bag: some manufacturers will love it; their raw material costs much less. Others -- those in the E & P and shipment of oil will be hit hard.

But this is the rub: it may be a "mixed bag" but some parts of the sector will be hit harder than others. Users of crude oil / energy will see little change with $43-oil vs $50 oil. Contracts for $48 oil were made months ago.

On the other hand, E & P and oil shippers will see cash flows change fairly quickly; yes, contracts are already in place, but contracts only cover part of their commitments.

My hunch: next week about this time, we will start seeing stories on $40-oil.

Illinois may lose contract with Powerball and Mega Millions lotteries.  The state needs to pay the lottery upfront, every June 30th -- and with literally no money for discretionary spending, Illinois may have no other choice but to end its association with the regional and national lotteries.

White trash.
Posted by Bruce Oksol at 1:40 PM No comments:

ICYMI: WTI dropped below $43 earlier today. Yesterday I first started talking about "capitulation." I haven't heard that exact word used today on CNBC but they have certainly danced around it.

I was going to write about McDonald's this past Sunday but simply ran out of time, ran out of energy.

Maybe I can do that now.

Two weeks ago, after swimming lessons for Sophia, her dad took the three of us to a high-end restaurant for breakfast. Unfortunately, at 11:05 a.m. the restaurant was no longer offering the breakfast menu. That was fine. We had a nice lunch.

One week later, after swimming lessons for Sophia, she and I were hungry for breakfast. Her dad was not with us; he was working. I took Sophia to our local McDonald's. I believe it was her first time ever in a McDonald's and her parents would probably "die" if they knew I took her for breakfast there.

I ordered coffee, a hash brown for me; and, then a stack of pancakes and apple juice for Sophia. While fixing her pancakes (butter and syrup), Sophia ate my hash brown -- without asking. LOL. She devoured the first two of three pancakes and then went to play in PlayPlace; later she came back and watched her favorite videos (YouTube) on my laptop. By that time time, I had thrown out her third pancake --- wow, was she upset. She was looking for that third pancake.

She was enjoying her video and PlayPlace so much, I went outside to get a newspaper left in the car to read. The McDonald's manager thought I was leaving, and said good-bye as I walked out the door. I stopped and said I was just going out to the car for a moment and would be back in; Sophia was really enjoying the experience.

After I got my newspaper, Sophia and I stayed there another half hour or so. We were about halfway across the parking lot when leaving when the McDonald's manager rushed out after us, carrying a little fluffy gift for Sophia: a Ty-branded big-eyed fluffy little "thing."

To say I was impressed would be an understatement.

I have found that any individual McDonald's takes on the "flavor" of its neighborhood. I dread going into a McDonald's in the inner city of a city like St Louis, but in the more "high-end" neighborhoods of north Texas, they are incredible.

By the way, every McDonald's employee that day was wearing an employee-shirt with "UberEATS" emblazoned on the front.

And, yes, I just checked, McDelivery is available in my zip code.
Posted by Bruce Oksol at 12:31 PM No comments:

Wow, what a great basin. Operators can take a well offline for 15 days and see a huge jump in production when the well comes back online.

There are a number of story lines that could be addressed but I often get ahead of my head lights.

Fracked 7/18/2011 (at FracFocus). No sundry forms suggesting this well was re-fracked. 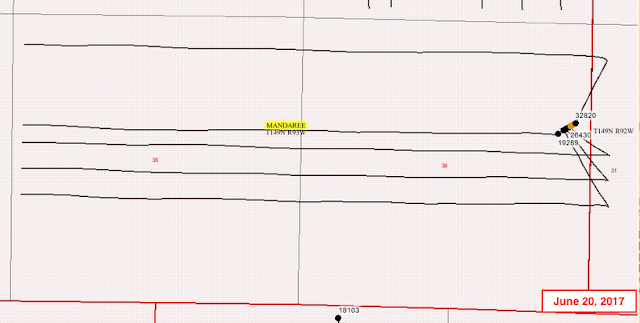 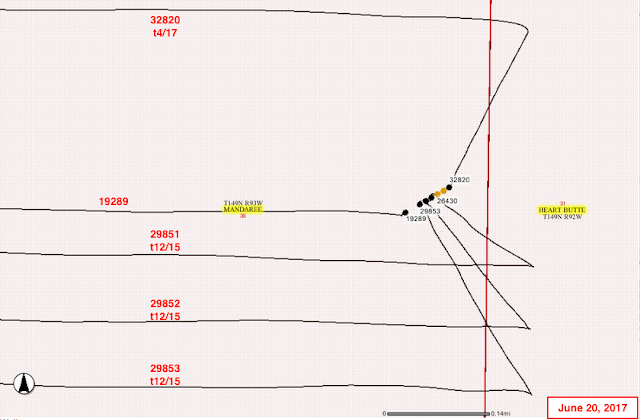 The well:
The pad: 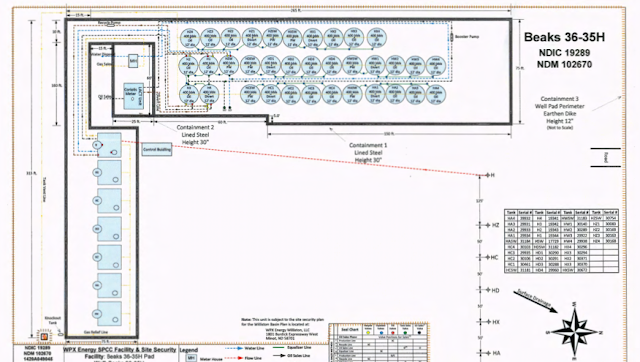 Production data: my hunch is that if you have read this far, you missed an even bigger point. Look at the test dates for the various wells in the map graphics above (three of the five were fracked in late 2015; one was fracked in early 2017).

The production profile posted above was only for the most recent production data, following the 2017 frack.

What happened after the 2015 frack? Here that data is:

CNBC starting to report the same thing that we've been reporting for the past six months, maybe longer.

During my 30-year career in the USAF, there was only one "major" aircraft platform that I was not allowed to fly on despite my training and qualifications, the RC-135. This report suggests why: http://www.foxnews.com/world/2017/06/20/breaking-news-armed-russian-jet-comes-within-5-feet-us-recon-jet.html.

Hopefully the link won't be broken; it's an incredible story.

This will clearly be a conversation piece when traveling .... perhaps a chick magnet? LOL. 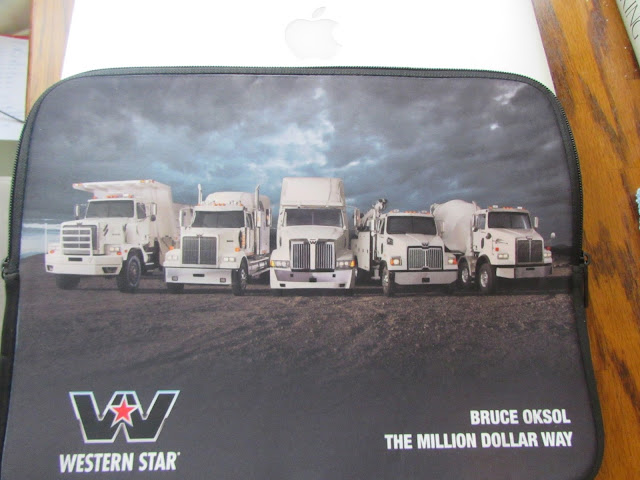 Random Update Of Recent Completion Strategies In The Bakken -- June 20, 2017

Disclaimer:
Completion "strategies" for the month of June, 2017 -- the Bakken: