Connecting Three Dots, But No Analysis, No Explanation -- And I Don't Have Anything Else To Say About This Right Now -- August 22, 2018

The second dot, from this link: 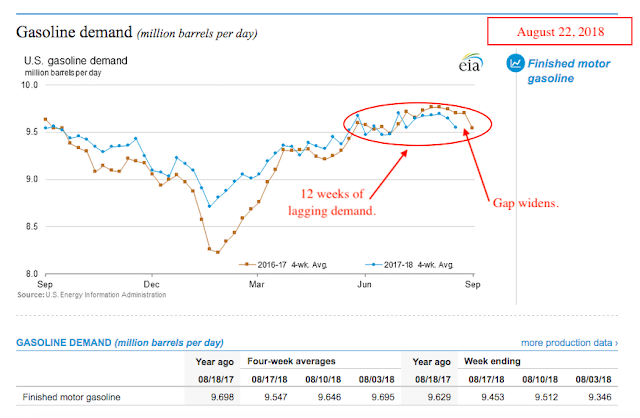 
Economy: the retail numbers being reported this week are simply sensational ....

Gasoline demand: yesterday afternoon -- US EIA says US Gulf Coast gasoline stocks build as refining holds above historic norms. Refiners have been operating at or near 98.1% capacity for several weeks now.

Gasoline demand: is a red herring, 2016 --- Forbes -- from the columnist who forecast the death of the Bakken, Art Berman.

As far as I can tell, no one has done a serious analysis of why gasoline demand is lagging this year compared to last year.

Any explanation has to take into consideration that this is a recent phenomenon. At wore, it's a 12-month shift; at best it's a six-month shift.

Long-term trends in driving habits, buying habits, etc, can't explain a sudden change like this. I also don't buy any argument in which arbitragers are "playing" the game differently this year. The EIA data is straightforward: the EIA is simply tabulating reports from all US refineries: how much gasoline did each refinery deliver. (But this could be the explanation -- see below.)

That's why I rule out two things immediately as possible explanations for the decrease in gasoline demand year-over-year:
Other possibilities:

In the Forbes article above, Art Berman argues "gasoline demand" is a "red herring" because of gasoline export data. Maybe it is, maybe it isn't.

But he uses a very, very misleading chart to try to prove his point.

Look at that graph and what I just said jumps out at you. 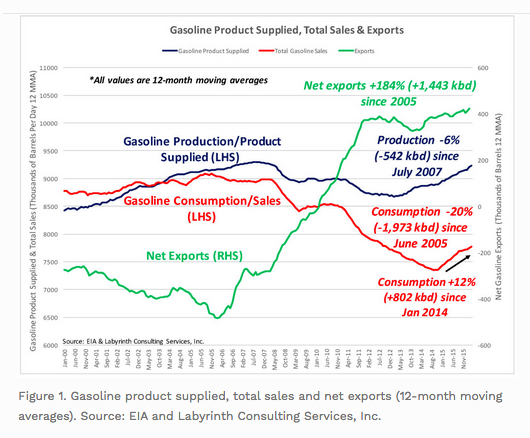 You have to read the very, very small print (and on the computer screen it's even more difficult): the left x-axis, measure in 10s of thousands, is "total product supplied and sales." Meanwhile the x-axis on the right is measured in hundreds.

Let's check, from the EIA, this data: 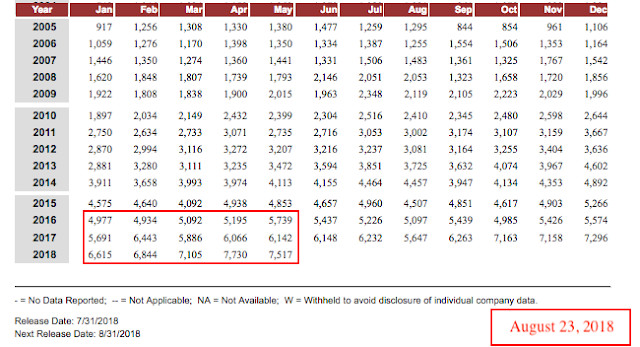 Nope. Exports are increasing. Significantly. To meet that demand, refiners have to maximize operating capacity. And they have to "deliver" on that "gasoline demand." The EIA "gasoline demand" data includes gasoline that will be exported.

So, in fact, domestic consumption (demand) is even worse than the "gasoline demand" graph suggests.

If, in fact, that domestic US gasoline demand is lower year-over-year, I have some thoughts but will not post those thoughts for now. But I think the "three dots" explain a lot.

Enerplus With Permits For A 7-Well "Aussie Animal" Pad Where The Antelope Roam And Where Seldom Is Heard A Discouraging Word -- August 22, 2018

The only discouraging words: among the faux environmentalists and the occasional cowboy / cowgirl whose horse steps in a gopher hole. 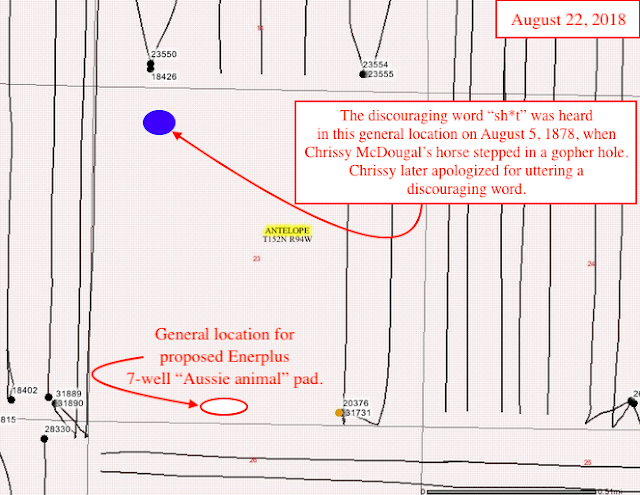 Iron Oil: over at "Bakken operators":

Posted by Bruce Oksol at 3:37 PM No comments:

TSA and airline security: this is why the TSA and the federal government do not trust state-issued driver's licenses. The "undocumented resident" who killed Mollie Tibbets in Iowa? Immigration and Customs Enforcement (ICE) agents said that Rivera, of Mexico, had been in the U.S. illegally for four to seven years.


Yarrabee Farms, which had hired Rivera, initially said he passed a federal E-Verify check, which is intended to maintain a database of I-9 forms and tax records of employees across the country. On Wednesday, however, co-owner and manager Dane Lang said that the farm used a different program that a family member wrongly thought was E-Verify. The farm used Social Security Administration data in the vetting process, Lang said.

EIA: today's weekly report;
Dead: Saudi Aramco officially kills any idea of going public: as predicted on the blog when this idea was first floated. This is a non-story. Except for one thing. The timing. The announcement comes just days after Elon Musk tweeted that he had financing secure for taking Tesla private, and many folks suggested that he had an agreement with Prince Salman to go forward with taking Tesla private. Interesting, huh?

News from "the swamp": 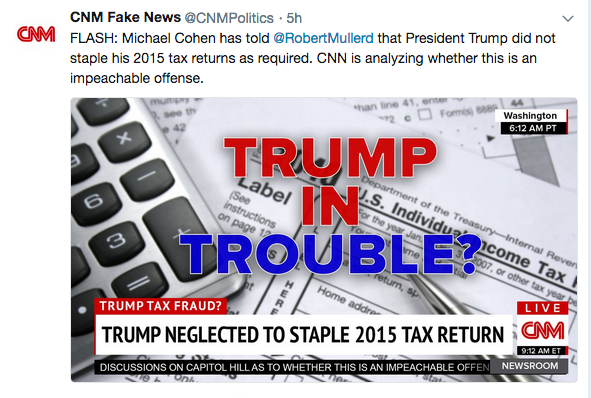 Posted by Bruce Oksol at 1:12 PM No comments:

Wells coming off the confidential list today, Wednesday: none.


With global demand for LNG rising and U.S. natural gas producers needing markets for their burgeoning output, it’s not a question of whether another round of U.S. liquefaction/LNG export facilities will be built, but which developer will be first and when it will make its final investment decision (FID). Odds are that the initial FID for this “next round” of projects is only months away, but as for the specific developer and project that will lead the pack, that has yet to be determined. We do know, however, that a handful of projects appear to be making real progress, and today we consider one of them: Tellurian’s Driftwood LNG project near Lake Charles, LA.

This is the second episode in our series on the next round of U.S. liquefaction/LNG export projects. Previously, we discussed the roller-coaster ride that U.S. LNG has been on for the past 20-odd years — and some odd years they’ve been. Through the 1990s and the first two-thirds of the 2000s, U.S. natural gas production was close to flat, so the general thinking was that U.S. gas output had peaked, and that over time the country would need to import increasing amounts of LNG to meet its gas demand. In 2005, the Energy Information Administration (EIA) estimated that by 2015 the U.S. would be importing the LNG equivalent of nearly 12 Bcf/d, and that by 2025, the nation would be importing LNG volumes equal to nearly 18 Bcf/d. A number of LNG import terminals were constructed to handle the expected inflow. It became clear by 2010-11, however, that the Shale Revolution — and the resulting boom in U.S. gas production — had eliminated the need for LNG imports. All of a sudden, many of the companies that had just finished building LNG import terminals started exploring the possibility of adding liquefaction plants at those sites to export LNG instead.