You mean that's it? A couple of extra gages and everyone's happy? You have got to be kidding. Reminds me of Roseanne Rossannadanna ("never mid") on NBC's "Saturday Night Live" many, many years ago.

A screen shot of the on-line "front-page" of The Bismarck Tribune:

For such a quick conclusion, the casino must have been losing a lot of money, as well as some charities for Native Americans.
Posted by Bruce Oksol at 6:58 PM No comments:

CORRECTION: Most Likely A TYPO: EOG Reports A Huge Well In The Parshall -- February 1, 2017 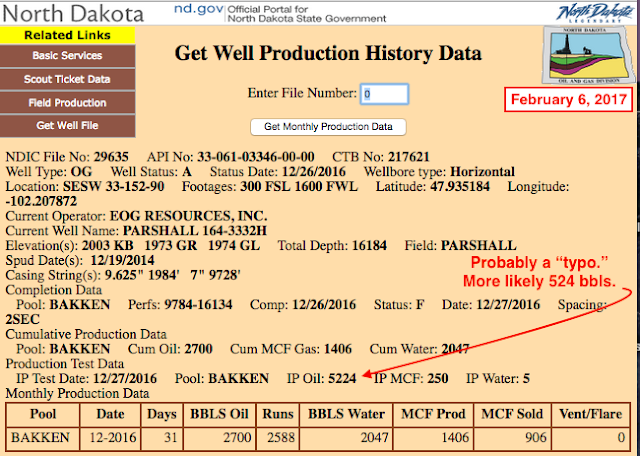 When you look at the first screenshot below, look how far east this well is and the IP. I've noticed a couple of EOG wells reporting huge initial production at the eastern edge of the Bakken. I remember early on in the boom, folks were saying that it was unlikely to get great wells this far east. Probably true, but it is nice to see a well with this IP this far east. Also note that it is a short lateral, although being sited in the adjacent section, it's a bit longer than the typical EOG short lateral, which makes the IP of 5,224 for crude oil even more impressive. All things being equal, one wonders what the IP would have been had the horizontal been a long lateral. 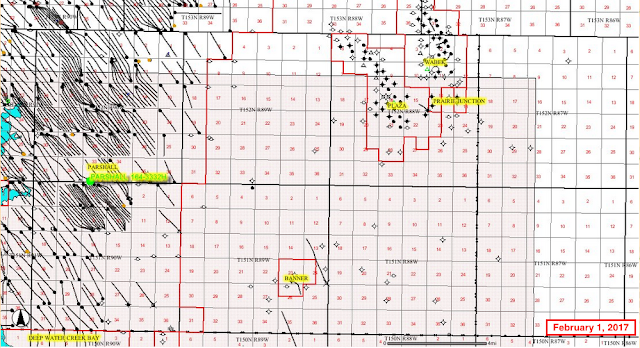 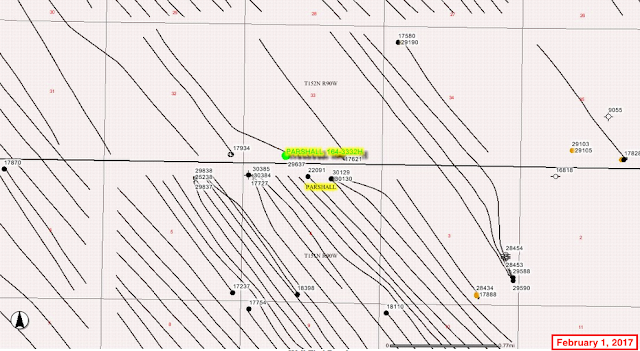 A neighboring well sited in the same section (need to follow-up in a few months):

I think we've turned the corner.
Posted by Bruce Oksol at 2:03 PM No comments:

I'm consistently amazed how inefficient Mother Nature is. Or perhaps, how efficient Bakken tight shale operators are in comparison to Mother Nature.

Note the peak production of this well after being fracked in the month of May, 2009: 11,976 bbls, which works out to 14,279 barrels for the full 31 days of the month (in fact, it would have been slightly less due to the severe decline rate of the Bakken).

After being fracked in 2009, after Mother Nature "shut-in" this well for a gazillion years, it's production was about 14,000 bbls in that first month, after which its production plunged to 2,000 bbls/month only six or seven months later.

However, a few years later, this well was taken off-line (not for a gazillion years as Mother Nature had done earlier) but for only a few months -- about six months in fact. After being taken off-line for only six months, look at the production in May, 2013: 14,798 bbls (for a 31-day month that would extrapolate to 15,291 bbls of crude oil.

After being fracked in early 2009, this well was down to about 2,000 bbl of crude oil/month by the seventh month.

Note, after this well was taken off-line for six months, it's production surged, and remained well above 2,000 bbls of crude oil/month for the next two years, in fact jumping to over 4,000 bbls in two consecutive months.

For newbies: this is all done with tongue in cheek. Pay no attention to this. It was just something that caught my attention: how much production in a Bakken well can improve by just taking it off-line for a few months. Of course, it begs a question. In fact, it begs a lot of questions.

For future reference, the well:

You will read that the US imported more crude oil last week than the previous week, to about the tuen of 500,000 bopd, now up to a little more than 8 million bopd.

There are two reasons the US imports oil:
From John Kemp, via Twitter: 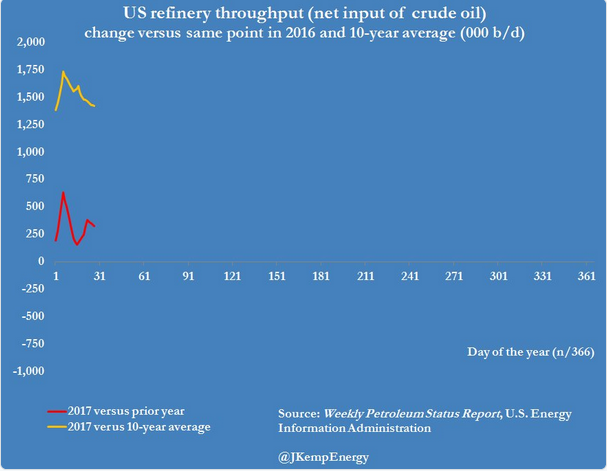 If I read the graph correctly, compared to last year, the US refinery throughput has increased about 350,000 bopd.

Compared to the 10-year average, US refinery throughput has increased about 1.5 million bopd. Where is all this gasoline (and other refined products) going? That's a rhetorical question; please don't reply.

I've always wondered why it was important to the ancient Babylonians that they understood the Pythagorean Theorem, you know:

It had to with measuring wealth. A farmer's prosperity was seen as dependent on the amount of grain he was able to produce, which, in turn, depended on the area that was available to the farmer. Area was known to be length x width, and when those two were equal, the area was equal to a-squared, and in this sense, wealth was a "squared quantity."

I assume I'm the only person who did not intuitively see that when learning the Pythagorean Theorem but there you have it.

This graphic will help: 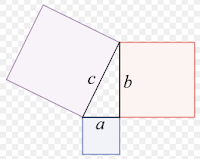 Later, 4:55 p.m. Central Time: "calm down" the NY Times tells us! The NY Times who warned us about the natural gas scam in the Marcellus and the likely failure of the Panama Canal expansion, now tells us the "bacon shortage" story is a "fake story." LOL. Glad to see The NY Times on top of this.

Later, 1:55 p.m. Central Time: Forbes yells -- the looming disaster -- yes, DISASTER -- of a US bacon shortage -- this has got to be a "first world problem" -- LOL -- I need to go out to the barn and bring in my comfort pony, and my motivational meerkat. And then folks wonder why I don't subscribe to Forbes any more. A "disaster." A US bacon shortage. LOL. Stock up now.

Over at USA Today.
Fast facts:

This is actually kind of a funny story. If it weren't for the calories I would eat a lot more bacon. As it is, I've never really kept bacon in the refrigerator. Until last November. I now buy a packet of the best bacon available, regardless of price, bring it home, and divide it up into three strips in each little zip-lock bag, to freeze, keeping one little zip-lock bag in the refrigerator at all times, and generally having one strip of bacon with one little Mickey Mouse waffle once every week. The one Mickey Mouse waffle almost every day, but only one slice of bacon once a week.
Posted by Bruce Oksol at 7:58 AM No comments: 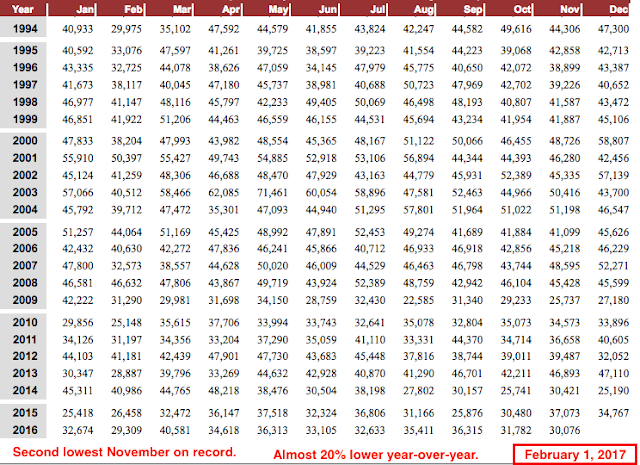 Email ThisBlogThis!Share to TwitterShare to FacebookShare to Pinterest
Labels: SaudiImport


US gasoline consumption averaged 9.243 million bopd in November, up 1.44% compared with prior year; equal to previous seasonal record set in 2006.

Disclaimer: this is not an investment site. Do not make any investment, financial, travel, job, or relationship decisions based on what you read here or think you may have read here. This is also not a music site or a dance site.

Next big thing.  UPS is toast. Discussed yesterday. What the heck just happened? -- Barrons. Data points:
Difficulty finding "guests"? MSNBC "Morning Joe" was on a roll, really, really good ... until .... they brought on the Reverend Al Sharpton. What were they thinking? I immediately switched stations; completely forgot about "Joe" -- when I remembered, I returned only to find NYC mayor De Blasio explaining why NYC is a sanctuary city. Back to CNBC.

Posted by Bruce Oksol at 6:27 AM No comments:

Later, 9:19 a.m. Central Time: if the writer over at the Financial Times says there is no "swing  producer" for crude oil, Reuters' John Kemp begs to differ:
One wonders if John Kemp (above) and the Financial Times (below) are looking at two sides of the same coin. Saudi is the only producer that can quickly cut production to support/raise global prices; the US shale operators can fairly quickly offset any cut in Saudi production, but really can't do much about "flooding" the market to bring the price down.

I guess it depends on the definition of "swing producer."


Original Post
Why I love to blog: I've always questioned the notion that US shale was the "swing producer." Now, from the Financial Times: for the first time in years, the global oil market has no swing producer.  The article is a nice overview of how we got where we are, and where we are headed; an article worthy to be archived (an op-ed by a consulting firm exec; a former senior director on the White House National Security Council, yada, yada, yada.


Some believe recent pledges by OPEC and Russia to restrain production mark the return of supply management.

Hardly. Since these producers began talking about restraint last February, they added around 1.4m barrels per day to the glut.

Their recent pledges to trim production from historically high levels resemble ad hoc, collective supply restraint agreements that sprang up occasionally since oil’s earliest days by producers spooked by price busts. They sometimes enjoyed temporary success but invariably fell apart due to supply growth outside and cheating within members’ ranks.

OPEC's own analysts, and those at the US Energy Information Administration, project these pledges will not dent the towering inventory glut.


Mr. Falih dismissed any suggestion that OPEC was a “foe” of U.S. energy interests.

“We’re not the foes,” he said. “People are recognizing that OPEC is a force for good.”


RBN Energy: midstream is on the upswing, but hidden risks remain below the surface.


Sultans of Swing, Dire Straits, Drum Cover by Sina
Posted by Bruce Oksol at 5:41 AM No comments: