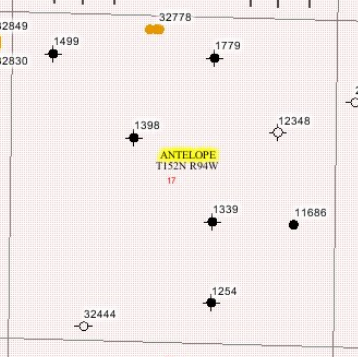 Six vertical wells in this section; five are permanently abandoned; one is still active. Note the Sanish well (#1779) that produced more than a million bbls of crude oil between 1958 and 1988 -- 30 years of production:

Note: production data for the Hess EN-Jeffrey wells has been updated.

This change reflects our understanding that lease stocks are not yet available for commercial use and that in many cases operators do not count them as production until they are transferred off of the lease via pipeline, rail, or trucks to tank farms for storage. Crude oil lease stocks, currently about 31 million barrels, refer to oil that is stored in tanks at sites across the United States where producers are drilling on leased land.

From Bloomberg, some data points:

This is Wednesday. Friday, the iPhone 7 and 7 Plus will be available at Apple stores. People have started camping out at the stores.

It looks like Women's Health  has a special issue this month.

As the reader who sent me this link said, "I can't make this stuff up." 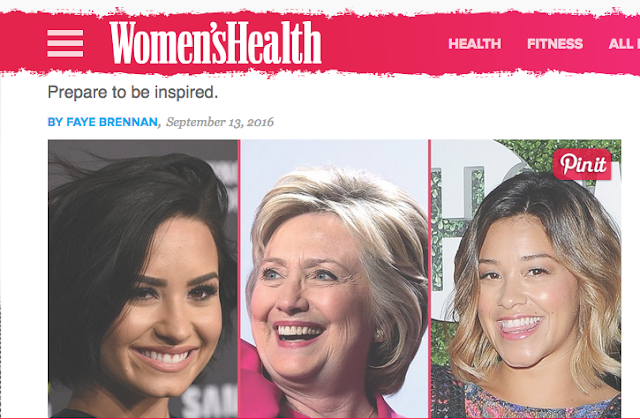 This screenshot was taken on September 14, 2016, at around 1:00 p.m. Central Time. This "issue" of Women's Health was dated September 13, 2016, two days after the individual in the middle suffered a "medical event" that has perplexed the brightest minds in journalism, including Charlie Rose.

Whatever. I'm preparing to be inspired.

Katie Ledecky on the Ellen Degeneres show today -- if I have the dates correct. 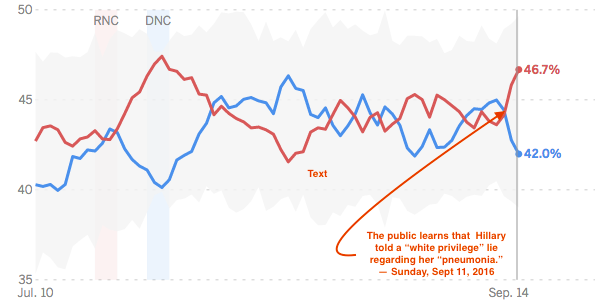 
Let’s face it — for producers, the last couple of years have stung, with low-slung energy prices allowing little-to-no returns on drilling investments in most parts of the major shale basins. A side effect of the low price environment in the past two years has been the shrinking geographic footprint of the Shale Revolution. About 50% of all onshore rigs in the Lower 48 currently are clustered in the top 20 counties for drilling activity. In effect, this also means a lot of the new production growth will come primarily from these same 20 counties, with the potential for all sorts of implications for infrastructure and regional price relationships. In today’s blog, we take a closer look at rig counts by county to see how much the geographic focus of the Shale Revolution has narrowed.

Some of the data points:

Mid-day trading: turned negative; down about 30 points. Hemorrhaging has been slowed to some residual slight oozing. NYSE

Opening: up a bit after several tough days.

Selloff takes some shine off energy shares: it's not that they're enamored with the current value proposition of energy. The elephant in the room is that people are hungry for yield.


Energy companies fell more than the broader stock market in a selloff that dragged down all 10 major sectors of the S&P 500, as well as crude-oil prices and government bonds. It was the third straight turbulent session, raising concerns that months of calm have given way to a period of volatility. Stocks and bonds fell sharply Friday as investors worried that central banks could dial back their easy-money policies. Markets stabilized Monday but declines picked up again Tuesday.

Energy stocks have risen roughly 12% in the S&P 500 so far this year as many investors bet that oil prices had bottomed and energy firms’ earnings were poised for a rebound. For three sessions through Monday, energy’s year-to-date gains were the biggest of any sector.


If You Go Away, Dusty Springfield

Largest-ever US military aid package to go to Israel.

Few things motivate Samsung employees like the opportunity to take advantage of weakness at Apple Inc.

Earlier this year, managers at the South Korean company began hearing the next iPhone (iPhone 7) wouldn’t have any eye-popping innovations. The device would look just like the previous two models too. It sounded like a potential opening for Samsung to leap ahead.

So the top brass at Samsung Electronics Co., including phone chief D.J. Koh, decided to accelerate the launch of a new phone they were confident would dazzle consumers and capitalize on the opportunity, according to people familiar with the matter.

They pushed suppliers to meet tighter deadlines, despite loads of new features, another person with direct knowledge said. The Note 7 would have a high-resolution screen that wraps around the edges, iris-recognition security and a more powerful, faster-charging battery.

Apple’s taunts that Samsung was a copycat would be silenced for good.

Then it all backfired. Just days after Samsung introduced the Note 7 in August, reports surfaced online that the phone’s batteries were bursting into flame. By the end of the month, there were dozens of fires and Samsung was rushing to understand what went wrong. On September 2, 2016, Koh held a grim press conference in Seoul where he announced Samsung would replace all 2.5 million phones shipped so far. What was supposed to be triumph had turned into a fiasco.

Original Post
Samsung rushes to contain fallout from Galaxy Note 7 recall. Just as the new Apple iPhone 7 and 7 Plus are released.


The company is also grappling with the issue of whether it will have enough supply of the new phones and components to replace millions of handsets that have reached consumers in such a short time frame.

Since Samsung announced the recall on September 2, 2016, more than $10 billion has been wiped off the company’s market value. Samsung also has delayed launches in other crucial markets such as India, and suffered dwindling consumer confidence as airlines and the U.S. Consumer Product Safety Commission have warned against people using or charging the phone on planes.

Samsung’s decision to recall the phones from consumers in different countries through different exchange programs has proved to be a bigger-than-expected challenge, and harder than a simultaneous global recall, people familiar with the matter said.

Posted by Bruce Oksol at 5:49 AM No comments:

In the September 13, 2016, edition of The New York Times: a feature article on one of the nation's most famous bike trails -- the Maah Daah Hey Trail that connects the south unit an the north unit of the Theodore Roosevelt National Park in North Dakota, perhaps one of the most unique parks in the world. It probably remains one of the remotest, wildest national parks but still incredibly accessible in the United States.

Some quotes from the article:

Note: the above were "cut and paste" from the article. A reader questioned the "elevation gain of 8,600 feet." See this link: http://www.experienceland.org/.


Grinding across 120 miles and over 8,000 feet of elevation gain on the fast, rugged gravel roads of the North Dakota Badlands. If you like riding on Badlands singletrack, you will love grinding Badlands gravel! All of the same gorgeous North Dakota scenery you see on the Maah Daah Hey trail, but with the freedom of wide, open, red scoria gravel roads.

The "Badlands Gravel Race" is at this link: http://www.experienceland.org/badlands-gravel-battle/.

Whatever Happened to Mark Papa? September 14, 2016

What is Mike Papa doing since he stepped down as CEO of EOG? From a closer look at Mike Filloon's recent SeekingAlpha article we have the answer.

His most recent article seems to have been hastily written and is a bit difficult to follow. Mike seems to be highlighting Silver Run on the coattails of Apache and Alpine Run.


EURs range from 1,100 MBOE to 2,700 MBOE. Apache estimates the play is worth $6,400 per undeveloped acre. This is a base-case scenario as that number could be much higher. In other parts of the play, we are seeing operators purchase acreage from $20,000 to $40,000/acre. Operators that have acquired Delaware acreage this year are EOG (NYSE:EOG), PDC Energy (NASDAQ:PDCE), Diamondback (NASDAQ:FANG), Parsley (NYSE:PE), Concho (NYSE:CXO), WPX Energy (NYSE:WPX), and Silver Run Acquisition (NASDAQ:SRAQU) (NASDAQ:SRAQ).

SRAQU is run by former EOG chief executive and renowned shale driller Mark Papa. He bought 38,000 acres from Centennial Resource Development for $1.38 billion, or $29,000 an acre. Some thought this was a hefty price to pay, but SRAQU could benefit from the Alpine High discovery. Not only could it benefit, but also it is the only levered acreage holder.

I generally don't include ticker symbols in my posts (with some notable exceptions; this is not an investment site) but in this case I have for various reasons).


Silver Run sells under three different ticker symbols. This includes SRAQU, SRAQ and SRAQW. It started as a blank check company for the purpose of bargain hunting for oil and gas assets. An oil glut can be hard on the industry, but it provides an opportunity for those with cash. Assets get cheaper as operators become distressed.

In its IPO, Silver Run Acquisition Corp. raised $450 million in an upsized offering at $10 a share in February of this year. It is sponsored by energy-focused private equity firm Riverstone Holdings LLC. Being a blank check company, SRAQU had no acreage initially. In June of this year, Centennial Resource Development, Inc., an operator in the Permian Basin's Delaware sub-basin, planned to launch an initial public offering (IPO) to raise up to $100 million.

Close readers of the blog might recognize Riverstone Holdings. It's been mentioned on the blog a few times.

The breakeven prices, per the linked article: 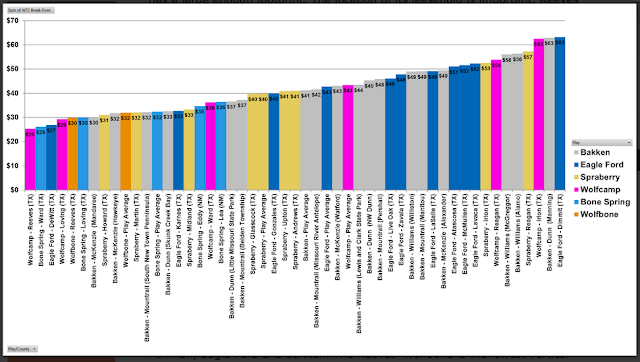 And finally, back to Mark Papa:


In summary, Silver Run may be the only way an investor will benefit from the Apache Alpine High find.

If the Barnett/Woodford is prospective to its acreage, the uplift could be substantial. Steve Keenan is Apache's Senior VP of North American Unconventional Resources, whose team is credited with the Alpine High discovery. He worked with Mark Papa at EOG for around 15 years before coming to Apache.

Mark Papa is the founder, past chairman and CEO of EOG Resources. He is still on EOG's Board of Directors. Mark Papa is now a partner at Riverstone and the current CEO of Silver Run. It can be interesting how two great careers can meet up again in Alpine High.

Whatever Happened to Randolph Scott? Statler Bros
Posted by Bruce Oksol at 4:19 AM No comments: