Another Example Of The Peculiarity Of The Bakken -- Oasis Forland -- Siverston Oil Field -- September 3, 2017

An Oasis Forland well will be coming off the confidential list this week. Let's see what that does to an adjacent older Forland well; FracFocus has no data to suggest this well was re-fracked:


You Don't Own Me, The Blow Monkeys, Rebel Without a Cause
Posted by Bruce Oksol at 10:05 PM No comments:

Posted by Bruce Oksol at 9:58 PM No comments: 
Pipeline, The Chantays
Posted by Bruce Oksol at 9:12 PM No comments:

Labor Day Weekend -- Quiet -- Except In North Korea Where H-Bomb Testing Said To Be Successful -- September 3, 2017


Well, la-di-da: From Reuters via Rigzone:


Oil giant Saudi Aramco is using new technology to re-explore areas of the vast Arabian desert known as the Empty Quarter, which could help to bolster its proven reserves of oil and gas before the company offers its shares to the public.

A team of about 900 people is using advanced seismic technology developed over the last few years to explore 15,400 square kilometres (5,950 square miles) around Turayqa in Saudi Arabia, Aramco said in a statement.

Gas avalailability in north north Texas: worsened overnight. Not much driving expected today. Heavy traffic tomorrow. Folks will need gasoline for Tuesday, going back to work. Situation will be aggravated by people like me who are now keeping their tanks full. Although, on the other hand, I've eliminated all but absolutely necessary driving, like taking Sophia out for ice cream.

Timely: probably the most timely obituary of the year -- that of President Reagan's science advisor, Jay Keyworth.


Jay Keyworth had little idea what to expect when he was named President Ronald Reagan’s science adviser in 1981.

The president called the nuclear physicist his “personal Merlin,” or wizard. One of Dr. Keyworth’s first assignments from Mr. Reagan was to have a quiet chat with his daughter Patti Davis, who was campaigning against nuclear reactors.

Dr. Keyworth’s role became much more public and controversial after President Reagan in March 1983 introduced his Strategic Defense Initiative. Dubbed “Star Wars,” it called for heavy spending on research to create space-based technology to destroy nuclear missiles before they could reach the U.S.

Political foes and many scientists called it wishful thinking. The media played up images of laser beams zapping missiles from space. Dr. Keyworth energetically defended the program as feasible. Although it was dropped by later administrations, the initiative rattled the Soviet Union and contributed to the crumbling of that empire, Dr. Keyworth argued, in a view shared by other Reagan supporters.

One wonders what Patti Davis thinks about North Korea having nuclear-tipped ICBMs that can reach the US?

I guess summers always bring out the stories on dinosaurs.

Last month The Smithsonian had this article: Will the Public Ever Get to See the “Dueling Dinosaurs”? America’s most spectacular fossil, found by a plucky Montana rancher, is locked up in a secret storage (scanned).

There was another dinosaur article a reader sent me earlier and now a third article, this one from The Washington Post:


A 66-million-year-old skull could unlock secrets about triceratops.

During a Facebook Live broadcast from the discovery site, Joe Sertich, dinosaur curator at the Denver Museum of Nature and Science, explained that, as with other triceratops located in the Denver area, this one appears to be about half the size of those that lived farther north, in the Dakotas and Montana.

“We don't really know why,” he added. “Even though we have hundreds of triceratops from the American West, we only have three good skulls. And this might be one of the best skeletons to tell us why Denver triceratops are smaller than all of their cousins everywhere else.” From the graphic above:
It should be noted that "Sue" will be moved "upstairs" at the Field Museum early next year to make room for the world's largest dinosaur discovered so far:


Beginning with her dismantling in February, the apex predator and apex museum specimen is being kicked upstairs in favor of a dinosaur much bigger and much more recently discovered — the world’s largest, in fact, the Patagotitan mayorum, a plant eater unearthed in South America in 2014. 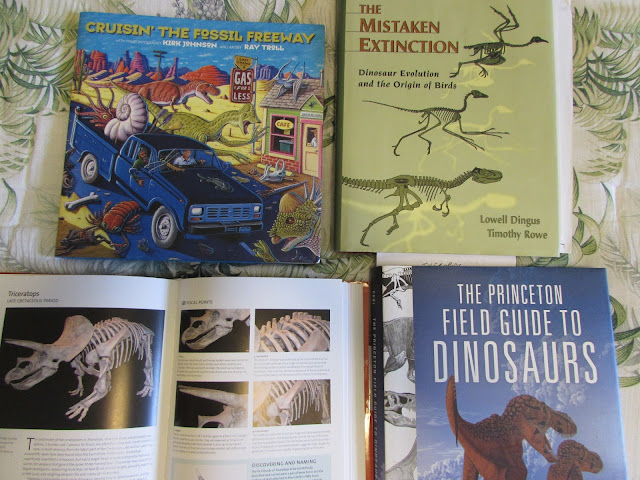 I found Cruisin' the Fossil Freeway at the Pioneer Trails Regional Museum, Bowman, ND, a couple of years ago.