Note: one can't buy shares of Burlington Northern any more but there are other regional rail monopolies still publicly traded. Just saying.

Disclaimer: this is not an investment site. Do not make any investment, financial, travel, job, or relationship decisions based on anything you read here or think you may have read here


BNSF Railway Co has called back roughly 4,000 of the 5,000 workers who were furloughed across its system last year, reflecting stronger volumes of coal, grain and intermodal containers and trailers.

Like other major U.S. railroads, the company owned by billionaire investor Warren Buffett's Berkshire Hathaway Inc has shed thousands of union and management jobs in recent years as it strives to improve efficiency and cut costs.

BNSF, the top U.S. coal carrier, laid off roughly 5,000 employees from mid-2015 to early 2016. The Texas-based company and its peers faced cost pressures from plunging coal volumes as the strong U.S. dollar hurt exports of the fuel and utilities switched to burning cheaper natural gas.

BNSF brought back roughly 4,000 of those workers as coal volumes rose this year, along with high levels of grain and upticks in intermodal containers and trailers, and sand used in hydraulic fracturing.

I was unaware that Sophia (3 years old) had any homework -- LOL --but whatever it was, it appears that she is doing well -- note the smiling face on her "desktop." 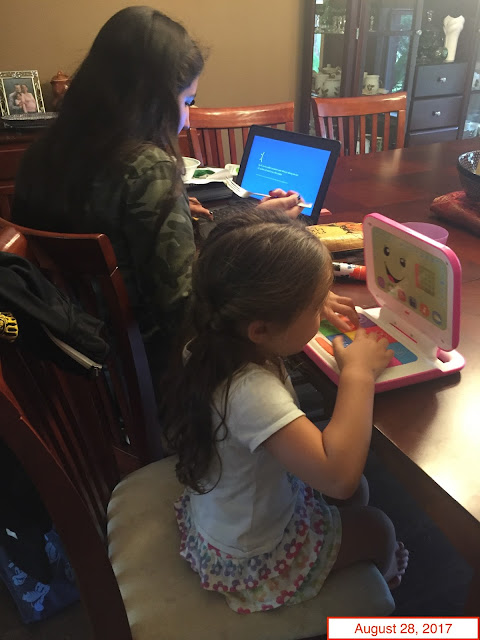 This is why I love to blog. Earlier this afternoon I posted a graphic explaining why Venezuelan sanctions will have no effect on the price of WTI.

Now, we have an op-ed piece from Bloomberg explaining why Hurricane/Tropical Storm will have no/minimal effect on WTI (graphics appear to be missing in this Bloomberg op-ed as re-printed in Rigzone.


Even as they grapple with more existential problems (if they're in southern Texas or are worried about people who are), energy traders are also confronted with the fact that, by and large, the markets they deal in appear largely unperturbed.

Prices of gasoline and other refined products have jumped -- a logical outcome, given that about one-sixth of U.S. refining capacity has been shut down. Yet crude oil and natural gas prices were either flat or down on Monday morning.

This is in marked contrast to the situation 12 years ago. Natural gas illustrates the point. When Katrina and Rita hit the Gulf, natural gas prices spiked into double digits, versus today's price of just less than $3 per million BTU.

More striking, though, is the differing impacts on expectations, as expressed in the futures market then and now. Here is what happened in 2005: And here's how things have moved this month. Spot the difference:


The key factor here is the shale boom. In its early stages, it got added impetus from surging natural-gas prices, due to both the commodity supercycle in the decade before 2014 and disaster-related spikes such as those in the summer and fall of 2005.

You can see this in the dramatic shifts in where the U.S. gets its domestic natural gas supply:


The shift away from the hurricane-prone waters of the Gulf of Mexico means even a catastrophic event like Harvey now has little impact on pricing. Indeed, even onshore production in Texas and Louisiana has declined as a share of domestic U.S. natural-gas production in recent years as the first wave of the shale boom has passed and growth has shifted elsewhere, particularly Appalachia.

If anything, Harvey is bearish for natural gas because of the disruption to local demand, which hasn't declined in importance over the past decade:

In a report published on Friday, ahead of the worst of the storm, Societe Generale analyst Breanne Dougherty estimated Harvey might subdue demand for natural gas by 1.5-2 billion cubic feet per day, roughly in line with estimates of the amount of supply taken off-line.

Besides direct usage, natural gas accounts for about 45 percent of Texas' electricity generation.

As of Monday morning, with hundreds of thousands of customers having lost power across the Gulf coast region, day-ahead peak power prices for Houston were down by a third compared to the middle of last week, hitting their lowest level since mid-March.

Although it will move inland (eventually), tropical storm Harvey is still going to be Texas through Thursday later this week, and possibly still in the state on Friday, before it finally moves northeast to Arkansas.

My wife and I stopped at the local Whole Foods store earlier today.

Not one mention of the historic event.

The store was practically empty; certainly there were more employees (most of them were stocking shelves) than customers.

Later I spoke to our adult daughter about Whole Foods. She says that it's her observation that the folks that shop at the Whole Foods in our neighborhood are vegans.

It will be interesting to follow the Amazon-Whole Foods story but I can guarantee you that based on what I saw today, other grocers have nothing to worry about. The brand items and line items that Whole Foods has are completely different from the brands of which I am familiar.

But clearly, Whole Foods serves a different niche than mainstream grocers and unless Whole Foods changes it products lines, the twain shall never meet.

Produce? No difference from what other stores offer.

Later: one day after writing the note above, this reporter in New Jersey visited a Whole Foods store in his neighborhood and was as underwhelmed as I was.
Posted by Bruce Oksol at 5:07 PM No comments:

Poll: Will US Crude Oil In Storage Increase Or Decrease In This Week's Report? -- August 28, 2017

September 2, 2017: Results of the poll here and the new data for re-balancing.

A huge "thank you" to a reader for suggesting this poll. It's the best kind of poll out there: in only two or three days we will have an "official" answer to a very interesting question.

This will be fun; this will be quick. We will know the results by close of business Wednesday, August 30, 2017.

Every week, generally by 10:30 a.m. ET, the EIA provides the weekly petroleum data which includes the US crude oil "drawdown" -- how many bbls of crude oil the US has in storage (not including the Strategic Petroleum Reserve).

I've been following this story for 17 weeks and have calculated the average drawdown after each week's data has been reported, and then using the "historical norm," have calculated the number of weeks it will be before US crude oil supplies in storage are "re-balanced."


So, what do you think? A poll is at the sidebar at the right in which we ask whether you think there will be a net drawdown when the data is posted this week. Anything less than a report of 463.2 million bbls of crude oil in US storage (not including the SPR) will be considered a drawdown.

This is going to be a tricky week. Under the best of circumstances it would have been difficult to predict (for the first two reasons noted below). But now there are so many variables:
Clues: right now CNBC is reporting --

In One Graph, Why Sanctions On Venezuela Will Have No Impact On US Oil Prices -- August 28, 2017

September 7, 2017: US crude oil inventories increased by its largest margin of the past 19 weeks.

And this reminder: oil fields are shutting down and operators in Canada's western oil sands are selling assets and/or pulling out because of the huge glut of heavy oil right now. Any continuing increase in the loss of Mexican and Venezuela oil will be more than offset by Canadian oil.

Geographically, logistically, politically, Canada has the advantage over Venezuela. Venezuela will have to offer a huge discount if the country wants to compete with Canada. Again, as remarkable as the graph is, Canada can supply a lot more oil to the US if the price is right. And, don't forget: if the Keystone XL is approved ... Nebraska decides (again) in November, 2017 ...

And, of course, additional imports from Saudi Arabia can make up any perceived shortfall. And, logistically and politically, Saudi Arabia is positioned much, much better than Venezuela. Saudi Arabia was the first country President Trump visited after being elected. To the best of my knowledge, Trump has no plans to visit Venezuela.

And don't forget about Iraq.

CNBC is reporting that three of Houston's largest refiners are shut down:
Not good news for Venezuela, I assume.

The Big Apple to issue an Apple iPhone to every NYPD officer for the first time ever, and at the same time will issue iPads for every patrol car. $160 million. Link here. Apple will replace Microsoft Window phones which explains a mystery: exactly who was buying Microsoft Window phones. Now we know. But not any more.
Posted by Bruce Oksol at 10:24 AM No comments:

Before I get started with the "global politics" post, one quick comment: at least one pundit says Hurricane Harvey has just complicated Congress' schedule in September. I disagree. The decision to raise the debt limit has just gotten easier ... even if they just kick the can down the road for another three months by a short-term raise in the debt limit.

I was wondering how to get started on this topic, something I thought about last night. I was thinking about the imminent defeat of ISIS in Iraq.

In less than a year, there have been tectonic changes in global politics. These are some of my myths (world views). These are facts missed with factoids, many of which are no doubt incorrect.

The Mideast
Europe
North Korea
Of all these things, the 180-degree turn in the Mideast is breath-taking. See this Platts article linked above:


With US imports of Saudi crude falling to levels last seen three decades ago, you could be forgiven for concluding that relations between Washington and Riyadh have broken down.

That clearly isn’t the case, however, judging from the red carpet rolled out for President Donald Trump upon his arrival in the Kingdom this spring.

Oil and security remains the pillars of the Saudi-US relationship that neither side appears likely to abandon anytime soon.

It's a mixed story, of course, as seen in this graph:

Not surprising: FERC approves "controversial" pipeline.  Data points:
Surprising: coal! From The Wall Street Journal -- the big name in coal’s resurgence: China. American coal producers filling voids created by overseas producers shifting exports to China. China is going to need a lot of coal to power all those coal-powered cars, pretty much being mandated by China.

Surprising: despite huge economic disaster in Houston --
Surprising: how fast the Amazon-Whole Foods merger was completed. Even my wife who does not follow "this stuff" was surprised to see how fast this happened. It's her experience that such a merger would take months if not a year to be completed; this time, in three months. Reminder: FTC has five seats; only two are occupied right now. I seem to remember reading that somewhere.

Fastest merger ever? What now?

Disclaimer: this is not an investment site. Yada, yada, yada.

BRK: according to Jim Cramer, insureres and re-insurers are the biggest beneficiaries of Hurricane Harvey (excepting perhaps refiners, home building suppliers, etc). Berkshire is the nation's biggest re-insurer. Pre-market; up slightly, but at the opening, absolutely flat. Down one cent at $179.59.
Posted by Bruce Oksol at 8:02 AM No comments:

Surprising? WTI is not rising, flat to slightly negative.

The dreaded Bakken decline curve: curious what I wrote back in February, 2013. Fast forward to August, 2017.
Posted by Bruce Oksol at 7:46 AM No comments: