Which way is the wind blowing in California?

In some respects, wind energy in the state has never been better, but by other measurements growth has hit a lull for the past four years.

The U.S. Department of Energy released its annual report a few weeks ago analyzing technologies and markets for the wind industry, showing that California has installed 5,656 megawatts of utility-scale wind, the fourth highest in the nation [trailing Texas by a huge margin, and even "beaten" by that little midwestern state, Iowa]. 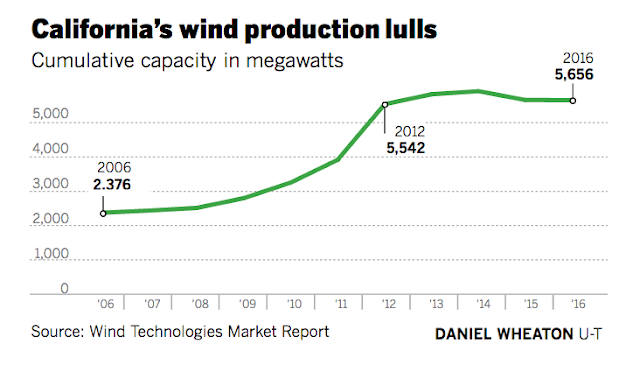 Note: this is "installed capacity." About 20% of that is actually delivered/used. Meanwhile, plants with reliable nuclear energy, coal, and natural gas must remain "on" to provide necessary back up when the wind is not blowing.

Meanwhile, a wave of natural gas plants to produce electricity are waiting in the wings, waiting to see whether Ohio underwrites their nuclear, coal industry:


I first saw the softcover book at Barnes and Noble a few weeks ago, paged through it, saw the names of several individuals involved in the project, thought it would be a good read, and ordered it from Amazon (along with some other books already in the "cart'). Meanwhile, some days later, and this is the unvarnished truth, I was looking for a "science" book at the local library and the biography of Margaret Sanger jumped out at me. Okay, not literally.

So, I guess I'm in my Margaret Sanger phase. I've read the biography (from the library); notes are here.

We take the "pill" for granted these days but for anyone coming of age in the 1960s and 1970s it's hard to think of something that was more life-altering.

I was a teen-ager / 20-something right in the middle of the sexual revolution, and completely unaware of all that was going one, particularly the social implications. I was too involved in academics. That all changed between 1973 and 1977 through a whirlwind of events.

It was really quite remarkable. At the time I never had any idea what was going on. I'm not sure many did. It was something about which was seldom discussed. It appears that Jonathan Eig has written a really good history of that decade -- actually several decades, of course -- based on the few pages I've read.

On June 10, 1957, after taking two months to review the application filed by G. D. Searle & Co., the FDA approved the sale of Enovid for infertility and menstrual irregularities. At about the same time, the drug was approved for the same used in England under the brand name Enavid.

The drug was being marketed in West Africa, particularly, to help women become pregnant.
Posted by Bruce Oksol at 6:10 PM No comments:

The facility, which shut amid heavy flooding in the Port Arthur area on 30 August, could reach that limited throughput 10 September if workers can clear equipment checked for storm damage.

Motiva is the US refining subsidiary of Saudi Aramco. The Port Arthur refinery is the single largest in the US.

Meanwhile, apparently Colonial Pipeline is up and running. Company says it will waive fees.


Colonial Pipeline today restored the Texas segments of its 1.4mn b/d gasoline pipeline supplying the US southeast and Atlantic coast, the company said. Service on Line 1 from the Houston and Pasadena area had resumed by 3pm ET.

The 1.1mn b/d distillates-bearing Line 2 resumed operations from the Houston and Pasadena origin points in Texas yesterday. Harvey at its peak disrupted about 5mn b/d of Texas and Louisiana refining capacity, or 27.5pc of total US crude processing.

COP says its Eagle Ford output is back to 80% of what it was pre-Harvey.
Posted by Bruce Oksol at 3:22 PM No comments:

Email ThisBlogThis!Share to TwitterShare to FacebookShare to Pinterest
Labels: Panic

Paul Ryan urges Trump to keep DACA. US Congress has six months to do just that. What's the problem? Oh, this is the problem:
I see a pattern developing here.

Thomas Friedman, New York Times columnist: excellent, excellent interview on CNBC  this morning. I assume the producer couldn't end that interview fast enough. A reader sent a link to a recent Friedman presentation which he referenced in his CNBC interview this morning. See comments.


The GDPNow model forecast for real GDP growth (seasonally adjusted annual rate) in the third quarter of 2017 is 3.2 percent on September 1, down from 3.3 percent on August 31.

The forecasts of third-quarter real consumer spending and nonresidential equipment investment growth increased from 2.8 percent and 6.1 percent to 3.0 percent and 7.1 percent, respectively, after this morning's Manufacturing ISM Report On Business from the Institute for Supply Management and the employment report from the U.S. Bureau of Labor Statistics. The model's estimate of the dynamic factor for August—normalized to have mean 0 and standard deviation 1 and used to forecast the yet-to-be released monthly GDP source data—increased from 0.11 to 0.41 after the reports.

These increases were more than offset by declines in the forecasted growth rates of real government spending and real nonresidential structures investment from 0.2 percent and 2.6 percent to -0.7 percent and -3.3 percent, respectively, after the employment report and this morning's construction spending release from the U.S. Census Bureau.

Someone recently wrote that the three greatest unsolved problems are:
Part I
Astronomy and Cosmology

Chapter 10: Biology: How the Basic Processes of Life Are Carried Out by DNA and Proteins
Chapter 11: Biology: Protein Folding
Chapter 12: Paleontology: How Present-Day Microbiological Information Can Be Used to Reconstruction "The Ancient Tree of Life"

Chapter 15: The Dynamics of the Inner Earth
Chapter 16 Earthquake Predicting

Chapter 19: Free Energy
Chapter 20: Nuclear Fusion and Waste
Posted by Bruce Oksol at 8:37 AM No comments: 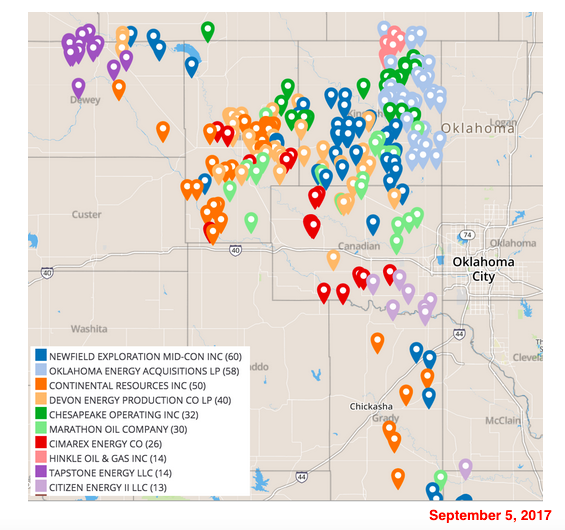 Posted by Bruce Oksol at 8:03 AM No comments:


Hurricane Harvey has dissipated, but the affected areas, including energy infrastructure and operations, are still in recovery mode and will be for some time to come. In the natural gas market, production fell as low as 71.3 Bcf/d this past week, and has now rebounded to pre-storm levels near 72 Bcf/d.

Deliveries for LNG export are also down nearly 1.0 Bcf/d (47%) from the 30-day average to just under 1.0 Bcf/d last Friday and dropped to about 475 MMcf/d over the weekend.

Meanwhile, U.S. consumption — in the power, industrial and residential and commercial sectors — this past week averaged 62.8 Bcf/d, down 6.0 Bcf/d (9%) versus last year and also 1.6 Bcf/d (3%) lower than the five-year average for this time.

In another important market development, Energy Transfer Partners’ new Rover Pipeline began partial service on Friday and deliveries rose to more than 500 MMcf/d over the weekend. What will these shifts mean for the gas market balance and storage inventory? Today, we continue our analysis of the gas market balance, this time with a forward look at potential storage scenarios for the balance of injection season. 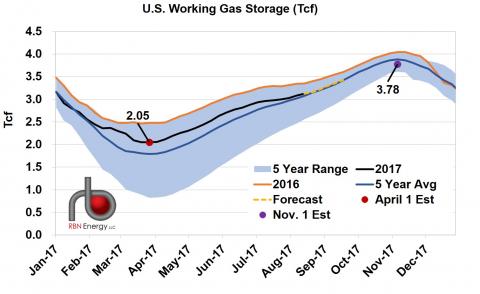