At Least We Have The Worst Case Scenario Numbers For Global Warming -- January 5, 2017

A "controversial" study suggests global warming has not slowed down (the current meme). From the BBC:


When the researchers corrected the data to take this "cold bias" into account, they concluded that the oceans had warmed 0.12C per decade since 2000, nearly twice as fast as previous estimates of 0.07 degrees.

As a result, the authors said that the warming experienced in the first 15 years of the 21st Century was "virtually indistinguishable" from the rate of warming between 1950-99, a time generally acknowledged (another meme) to have seen significant rates of warming from human emissions of CO2.

Again, based on ocean buoys, the "oceans" have warmed 0.12C per decade since 2000 -- to the best of my knowledge, we haven't even had two full decades since 2000, but letting that go, 0.12C per decade = 0.012C per year. Does anyone truly believe that 0.012C per year for the "entire global ocean" is even a) reproducible; and, b) statistically significant. (It's possible, the authors mean "per rolling decade.")

At this rate, a hundred years from now, ocean temperature will be 10 x 0.12C or 1.2C warmer. Okay. Whatever. And this was the worst case scenario. And a "controversial" study at that.

I hope you had the time of your life.


Good Riddance (Time Of Your Life, Green Day
Posted by Bruce Oksol at 9:00 PM No comments:


One well coming off confidential list Friday:
Six producing wells (DUCs) reported to be completed:
Nothing else on the daily activity report.
Posted by Bruce Oksol at 5:52 PM No comments:

Stanley Black and Decker will open a new $35 million manufacturing plant in the United States after acquiring Craftsman from Sears. USA Today suggests Stanley B&D made the announcement to "inoculate the company from the possible effects of the president-elect's threatened "border tax."

So, we'll add this to the #TrumpJobs page.


See if you can spot the mistake: 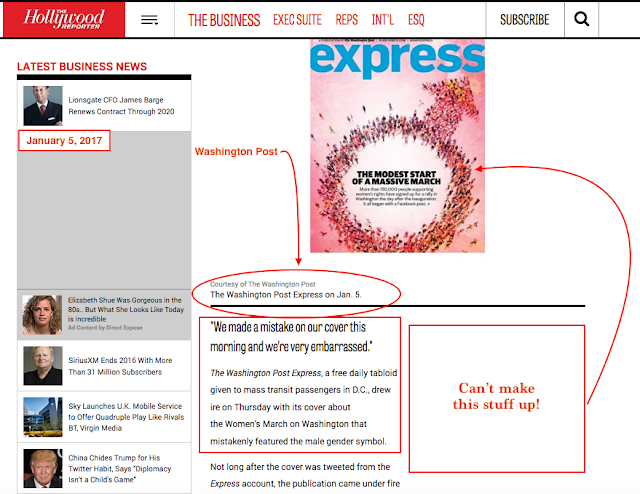 For those who missed it: this was the Women's Inauguration March bulletin, a free daily tabloid urging women to join the million-women march on Washington. The "male" symbol was used for the cover to highlight the "million-women march."

Forward together! From the same group telling us the average global temperature will be 0.2 degrees warmer 83 years from now if we don't stop cows from passing gas.

Another great example of the "strawman argument."  No one ever said other presidents didn't get the same medal. All we're saying is that the boss got a participation medal from one of his employees. 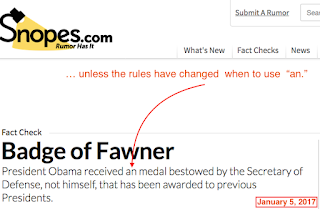 Snopes.com has never updated its March 10, 2011 "update" of the Bakken in which it noted:


According to news accounts, although new drilling techniques have greatly increased oil production in Bakken formation in recent years, as of February 2011 that region was still yielding less than half a million barrels per day.

Yup, according to news accounts..... I think Hillary used Snopes.com for her own fact-checking.


"They do demonstrate a level of depravity that is an outrage to a lot of Americans," Earnest said. "I have not spoken to the president but I'm confident he would be angered by the images depicted."

From EIA's annual energy outlook 2017: EIA's AEO2017 projects the United States as a net energy exporter in most cases.


This is the first time that EIA is publishing projections through 2050 in the AEO tables.

Exports are highest, and grow throughout the projection period, in the High Oil and Gas Resource and Technology case, as favorable geology and technological developments combine to produce oil and gas at lower prices.

In all cases but the High Oil and Gas Resource Technology case, which assumes substantial improvements in production technology and more favorable resource availability, U.S. production declines in the 2030s, which slows or reverses projected growth in net energy exports.


"EIA’s projections show how advances in technology are driving oil and natural gas production, renewables penetration, and demand-side efficiencies and reshaping the energy future," said EIA Administrator Adam Sieminski. "The variation across the analysis cases of projected net energy export levels—as well as other findings in AEO2017— demonstrates the importance of considering the full set of AEO cases.”

Disclaimer: this is not an investment site. It is also not a music site, and it certainly is not a dance site.

For oil and gas sector investors:  From 24/7 Wall Street: Merrill Lynch’s 5 Top Large Cap Oil and Gas Stocks for 2017 --
When one looks at that very, very short list, I see "Bakken" more than "Permian."

Hawaii's Kilauea (pronounced "kill-a-whale" but like French, the "l" is silent) is spewing CO2 into the atmosphere. Hawaii's most active volcano is currently putting on quite a show, as noted over at CNBC this morning.

For those actually following the science, from livescience.com:


Until the end of the 20th century, the academic consensus was that this volcanic output was tiny — a fiery speck against the colossal anthropogenic footprint. Recently, though, volcanologists have begun to reveal a hidden side to our leaking planet.

Exactly how much CO2 passes through the magmatic vents in our crust might be one of the most important questions that Earth science can answer. Volcanoes may have been overtaken in the carbon stakes, but in order to properly assess the consequences of human pollution, we need the reference point of the natural background. And we're getting there; the last twenty years have seen huge steps in our understanding of how, and how much CO2 leaves the deep Earth. But at the same time, a disturbing pattern has been emerging.

In 1992, it was thought that volcanic degassing released something like 100 million tons of CO2 each year. Around the turn of the millennium, this figure was getting closer to 200. The most recent estimate, released this February, comes from a team led by Mike Burton, of the Italian National Institute of Geophysics and Volcanology – and it’s just shy of 600 million tons. It caps a staggering trend: A six-fold increase in just two decades.
These inflating figures, I hasten to add, don't mean that our planet is suddenly venting more CO2.

Humanity certainly is; but any changes to the volcanic background level would occur over generations, not years. The rise we’re seeing now, therefore, must have been there all along: As scientific progress is widening our perspective, the daunting outline of how little we really know about volcanoes is beginning to loom large.

I suppose if they could "plug" erupting volcanoes with farting cows, warmists could kill two problems at one time.
Posted by Bruce Oksol at 9:12 AM No comments:

DAPL weather: -15 degrees in Minot, ND, this a.m. Had it not been for global warming, it would have been -17 degrees.

Huge winter storm Helena to dump snow across the US: of course, this was predicted back in 1994 by the warmists, that this would happen. "Snow days" across the nation.

Setting records: it's official. At 53.1 inches (so far, and there are still six more months in this year's snow season) that is the most snowfall ever accumulated to date. The 1993 - 1994 snowfall season, July 1, through January 2, held the record at 49.3 inches.

Re-posting: from Rigzone -- the biggest oil and/or gas industry surprise of 2016.

Politicized: it looks like Trump was right or certainly worthy of discussion -- the US intelligence agencies have been politicized -- discussion on CNBC this a.m. IRS, DOJ, CIA (Benghazi) all under discussion. Former Senator Mitchell (Maine) blames the internet; says it's human nature for everyone (including spy agencies) to be politicized -- "don't just blame the politicians and bureaucrats."

Disclaimer: this is not an investment site. Not too many days ago I suggested the sectors that would do well in the market under Trump. Today, in The Wall Street Journal: defense firms cash in amid soaring demand for munitions.

Mexico: looting over anger at 20% increase in price of gasoline.


RBN Energy: why did the normal butane market go on a holiday bender?

Barnes & Noble: cuts forecast amid holiday sales decline. Cites lower traffic, reduced art-supplies sales, and lack of a blockbuster album. Another Geico Rock nominee for the 2017 award? This is what the CEO of Barnes and Noble said (I guess this is why he gets paid the big bucks):


“There will be less retail stores 20 years from now,” he added. “The question is which ones will survive and what will be the attributes that make customers come.”

Craftsman: wow. Sears sells its Craftsman brand -- that was #1 reason I shopped Sears years ago. $900 million for Craftsman. Will also close 150 stores.

Opening: Dow 30 down a bit, down about 20 points. NASDAQ up. Crawler says oil, gold "up." Energy on the "upside." Macy's, Kohl's dragging the market down.
Posted by Bruce Oksol at 6:25 AM No comments: