I find this absolutely fascinating.

It does not matter at all what Apple's earnings are this quarter or how they compare to past quarters. The only thing that matters is whether Apple and/or AAPL live up to all the hype. If speculators and traders are disappointed, AAPL shares will plummet regardless of what the earnings are or what is said at the conference call.

But for investors in Apple / AAPL, it will be a win-win regardless of what is reported Wednesday; whatever the stock does on Wednesday it will be a win for shareholders. And the nice thing is this: for those who are a bit skittish can sell Monday and/or Tuesday.

The only dog I have in this fight is an "emotional" one. I hope Apple blows the socks off every analyst on Wednesday because that's what the tea leaves suggest will happen. Due to many factors that may not happen, but my hunch is whether Apple impresses traders, speculators, or Jim Cramer, this is going to be one of the most watched earnings calls ever. For me, it's even more interesting than what Elon Musk and Tesla will have to say whenever they report.

For now, just the graphics.

I did not look at the market today and have no idea the P/E or the market value of either Apple or Tesla. To find the screenshots above I googled AAPL specifically and did not check the market.

Nothing Ceases To Amaze Me Any More -- Now Elon Musk Will Drill For Natural Gas In South Texas -- January 22, 2021

Elon Musk recently moved to Texas, where he launches some of his rockets and is building a battery factory. Now, for good measure, he plans to drill for natural gas in the state.

The billionaire’s SpaceX intends to drill wells close to the company’s Boca Chica launchpad, it was revealed during a Friday hearing before the Railroad Commission of Texas, the state’s energy regulator.

Production has yet to start because of a legal dispute between the SpaceX subsidiary Lone Star Mineral Development and another energy company. Tim George, an attorney representing Lone Star, said at the hearing that SpaceX plans to use the methane it extracts from the ground “in connection with their rocket facility operations.”

While it’s unclear what exactly the gas would be used for, SpaceX plans to utilize super-chilled liquid methane and liquid oxygen as fuel for its Raptor engines. The company’s Starship and Super Heavy vehicles are tested at Boca Chica, and orbital launches are planned for the site.

Personally I think this is fascinating. It will be interesting to see what Elon Musk has up his sleeve this time.

This is what makes it fascinating: he is always coming up with ideas. Some work, some don't. But at least he's willing to try. I would love it if he heard about the possibility of economically mining rare earth minerals from North Dakota lignite.

The CDC tracks this data at this site.  I was unaware of this site until Saturday, January 23, 2021. Starting this weekend I will switch to using this data rather than the sites I used previously. In addition, there will now be two spreadsheets: a) vaccine delivered and administered; b) number of folks actually immunized.

The numbers above come from Bloomberg and Johns Hopkins. I assume the numbers provided lag by at least one day. If we get incomplete data over weekends or holidays, averages will be used.

It appears, for example, that about 2 million new doses are distributed to health facilities each day (column B).

It appears that in the last two days, "shootists/jabbers" gave fewer vaccinations than dosages received. For example, on January 21, 2021, 97.67% of newly received doses were administered (column E), meaning that the "supply on hand" actually increased slightly.

On January 22, 2021, only 72.06% of newly received doses were administered (column E), meaning that a significant number of newly distributed doses failed to actually make it into anyone's arms. The "supply on hand" should be increasing. If the "supply on hand" is not increasing, then the numbers are wrong, or there is wastage, spoilage, theft, or "who knows what."

I am unaware of a source for the amount of "supply on hand" provided to the media on a daily basis. One cannot determine (or even estimate) the "supply on hand" given the information above.

For example, due to the size of the needles and syringes used and other variables, it is likely there is some wastage. For example, in a 10-dose vial, only nine doses might actually be obtained. This was discussed by public health officials and the media has reported that. That "lost" one dose per vial would simply be "lost." It happens. Moms who are given a ten-day supply of liquid antibiotic for their toddler know what I'm talking about. The 20-dose plastic bottle generally runs out before the 20th dose is given.

Disclaimer: I often make simple arithmetic errors. I am posting this for my benefit only. If this is important to you, go to the source. Don't quote me on any of my data. It's probably wrong, but it gives me an idea of what is going on.

By the way, to the best of my knowledge, I'm the first blogger to provide a spreadsheet of this sort. Right now, it doesn't provide much information, but my hunch is that thirty days from now, it's going to be very, very helpful or enlightening. These are the kind of spreadsheets that Dr Fauci is looking at.

Hey, by the way, there's a story / article / report out there that a physician has been arrested for stealing nine doses of the vaccine. Now you know why it nine doses. It was a ten-dose vial from which one dose had been given.

Email ThisBlogThis!Share to TwitterShare to FacebookShare to Pinterest
Labels: Biden_Metrics

Change of operator: about a dozen Crescent Point Energy wells were transferred to Resource Energy Can-Am, LLC; all wells in Divide County

One Well Coming Off The Confidential List Today; Hess Reports Another One For The Record Books -- January 22, 2021

First things first: I first noticed "TTF" just a few days ago. I would have never caught it had I not blogged. This is really, really cool. Today, RBN Energy has a blog devoted to TTF. See below.

Ominous: that's the only word that describes what I see looking through the morning headlines. In less than twenty-four hours, a trifecta that should scare the heck out of any investor: 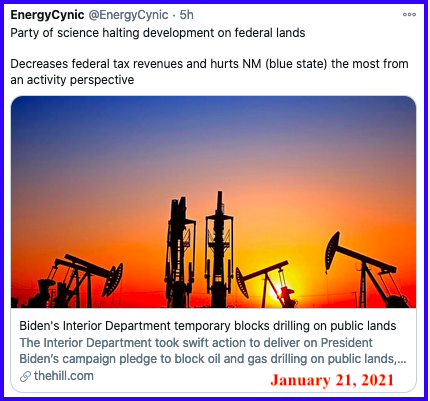 Chinese flu watch: for those who caught it, the Fauci press conference was sobering. He was very, very optimistic saying that things would look better by the autumn of 2021. That's eight months from now. Hollywood is not so optimistic. The David Craig / James Bond movie, already delayed twice, will now be delayed again. The opening has now been moved from July (?) to October 8, 2021.

Reality sucks: how long will it take to immunize all American adults over the age of 16?  At the current rate, not until the summer of 2022. That's eighteen months -- a year and a half -- from now. If the pace picks up as promised by the new CEO/CIC, the date could be bumped up to the spring of 2022. Until then, masking for everyone, double masking for some. I think United Airlines can see the writing on the wall. Ominous.

Futures: the Dow is down only 250 points in pre-market trading; the tea leaves suggest it could be much worse than that by the end of the day. Very ominous.

Auto manufacturers: the tea leaves suggest this sector will hit a brick wall this year or next. Reason: shortage of computer chips. Who wudda thought?

Intel? In the same boat as IBM. Things look very, very ominous for this company. Link here. If this was ever a time for China to make a move on Taiwan, this would be it.

Apple? Are we starting to see a trend here? Motley Fool says AAPL is overdue for a 30% haircut.

Loony tunes: Google-linked balloon project to provide cell service to remote areas will be shut down.

Uber? It's all over for Uber. Organized labor won. Elections have consequences.

Rear view mirror: and we won't see a repeat of this in a long, long time. Yesterday, data on housing starts and building permits showed the pace of construction of new, single-family homes was the best since since February, 2006. That's fifteen years ago. Pace of housing construction the best in 15 years and the American electorate thought we needed a change so that we could "Bring Back Better."

Scammed: I need someone to explain how this could happen. Link: https://www.foxnews.com/lifestyle/georgia-teenager-accused-of-scamming-980g-from-grocery-store. Brand new on the job, working as a minimum wage clerk, this individual, in less than two weeks, scammed one million dollars from the grocery story where he worked by faking "returns" at the checkout line. Apparently he just picked up items in the store, took them to checkout, said he wanted to return the items and wanted a refund to be credited to his credit card account. One million dollars in returns in less than two weeks. That's a lot of Mac and Cheese and Ramen Soup that he was returning. Later: a very simple answer how he did it.

Presidential watch: in video gone viral, very clear that the new CEO/CIC did not know he was the CIC. I'm not even sure he knows he's the new CEO.

By the way, when it comes to oil, who "owns" the reservation? EOG, Whiting, and WPX.

TTF has gained favor over NBP largely due to its location closer to more markets, supply pipelines, plentiful storage, and also the Netherlands’ Gate LNG import terminal, which has become paramount given Europe’s growing need for imported gas.

As imports have grown, so has TTF in terms of its volume and its liquidity — a trend that is expected to continue as the European gas market evolves. TTF now shares the stage with Henry Hub and the Japan Korea Marker (JKM) as one of the key global benchmarks for LNG and natural gas.

Though traders use TTF as a price index for LNG, much like its cross-Atlantic peer, Henry Hub, TTF is also heavily influenced by regional pipeline gas and storage levels. Today, we’ll look at the history of Europe’s premier natural gas index and the fundamentals affecting it.

We're currently in "Bakken 4.0." It's very possible we move to Bakken 5.0 if the following four "things" converge as expected:

It's tempting to move us to Bakken 5.0 as of January 21, 2021, the day the country's new CEO/CIC banned new leasing on federal land. But the ban is temporary, and we have not yet seen how the rest of the criteria play out. I'm not sure if I should include global geopolitical events as part of the definition, but we'll see.