Here's the headline over at oilprice:

Yeah, except for a small increase --- and, I mean, really, really small -- in the OPEC basket, all the other "major" crude oils actually went down in price. This gets tedious.

This was previously reported/posted, but it deserves a stand-alone post:

Look at the production data for two CLR Mountain Gap wells still on confidential list; compare with that MRO Ross well noted above.

Now go back and read carefully the full post for the CLR Mountain Gap wells at that link (https://themilliondollarway.blogspot.com/2018/06/fracfocus-data-for-two-wells-currently.html).

Look how empty this area is: 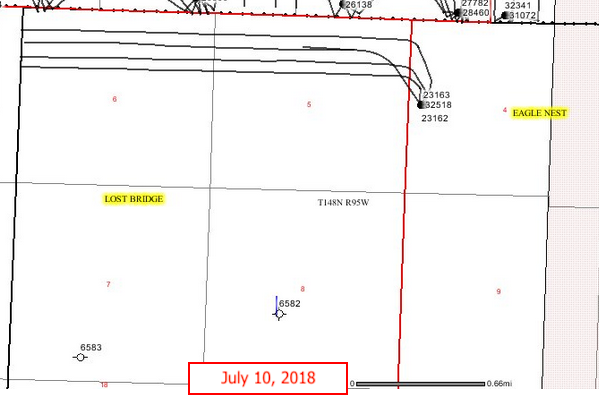 It's about 24 miles southeast of Watford City as the bald eagle flies: 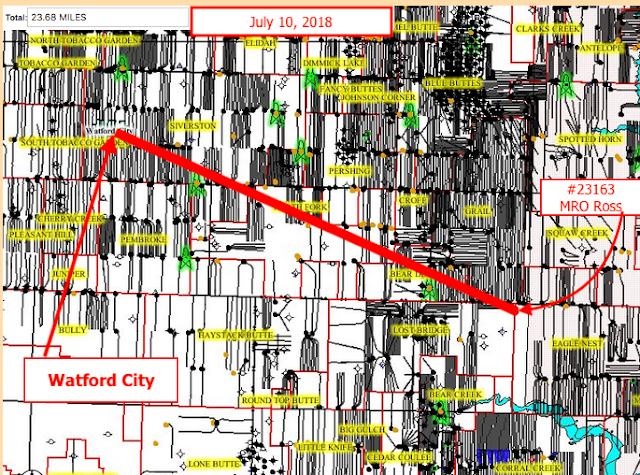 Lost Bridge appears to be an incredible field. Lost Bridge is in an incredible neighborhood; it's tracked here. It's just south of one of the best fields in the Bakken, the "Helis Grail." And it's just west of another nice field, the Eagle Nest. 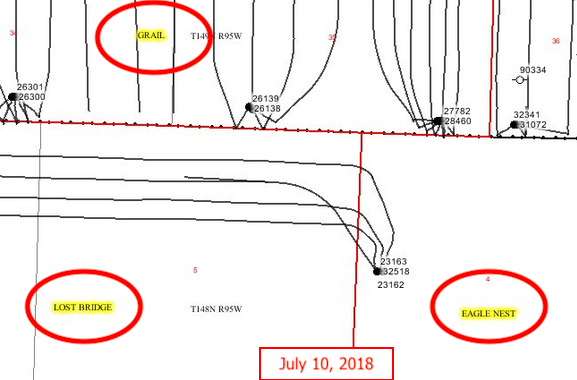 Finally, zooming in, here are the four wells as they are today: 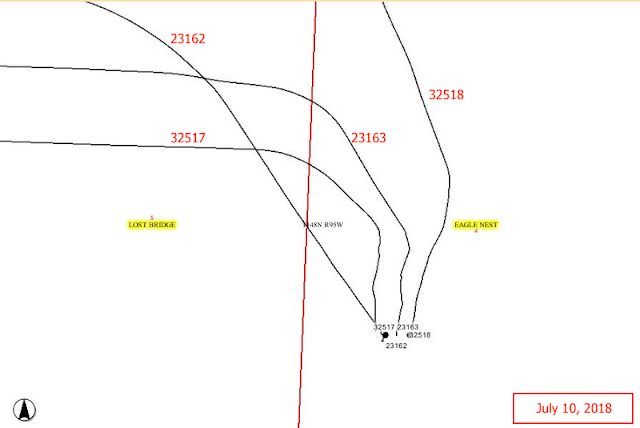 The wells:
Posted by Bruce Oksol at 7:24 PM No comments:

Look at the production data for two CLR Mountain Gap wells still on confidential list; compare with that MRO Ross well noted above.

Now go back and read carefully the full post for the CLR Mountain Gap wells at that link (https://themilliondollarway.blogspot.com/2018/06/fracfocus-data-for-two-wells-currently.html).

See this post for discussion.
Posted by Bruce Oksol at 3:31 PM No comments:

And Now The Real Fun Begins Last night, late in the evening, he announces and then hosts the nominee for the Supreme Court and his family -- late into the evening. Certainly well after midnight before the White House was back to "normal."

Now President Trump is in Brussels for the NATO meeting. He must have left directly from the prime time speech last night, helicoptered to Andrews, and then flew to Europe.

And less than a week from today, next Monday, he will have a "summit" with Putin. It has been rumored and alleged that Putin has been colluding with the Russians in anticipation of this "summit."

By the way, Melania is with her husband in Brussels. The big question: where are Ivanka and Jared? Or Donald, Jr, for that matter. They are representing the president elsewhere helping to make America great again.

By the way, President Trump also found time to pardon a rancher and his son who had both been convicted on arson charges, sparking the 2016 occupation of a wildlife refuge. Nevada. Any thought this is the big story in blue state Nevada right now and will probably carry through the mid-terms?

By the way, Elon Musk, according to Fox News, was the only CEO to fly to Thailand with a small submarine -- and, lo and behold -- it looks like it would have done the trick had it been needed.

My hunch is that with Musk making a deal with China, punishing tariffs on Tesla autos will be rescinded. I'm beginning to think that Musk needs to be given title in Donald Trump's cabinet, "Honorary Secretary of Transportation." 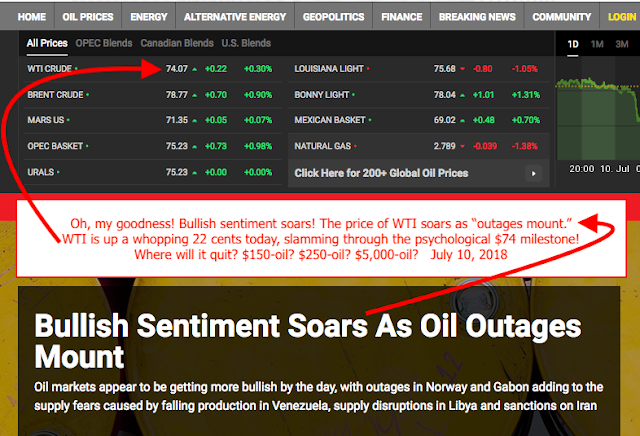 Link here to The Bismarck Tribune.
Posted by Bruce Oksol at 2:13 PM No comments:

A simple note on your shirt is enough to get you a free entree.

Our Chick-fil-A restaurant was absolutely packed with two lanes of traffic in the drive-through. 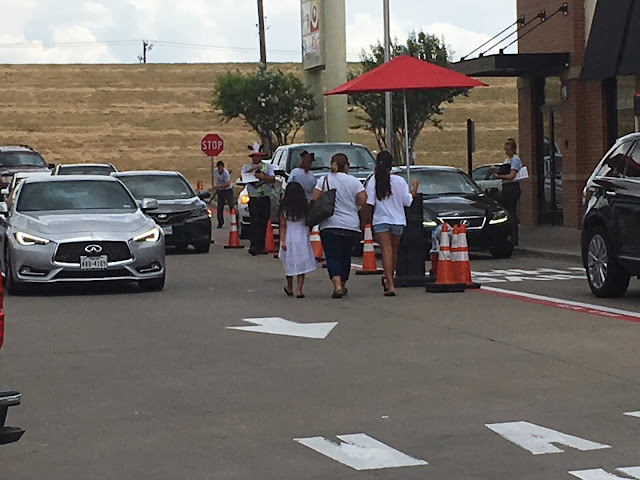 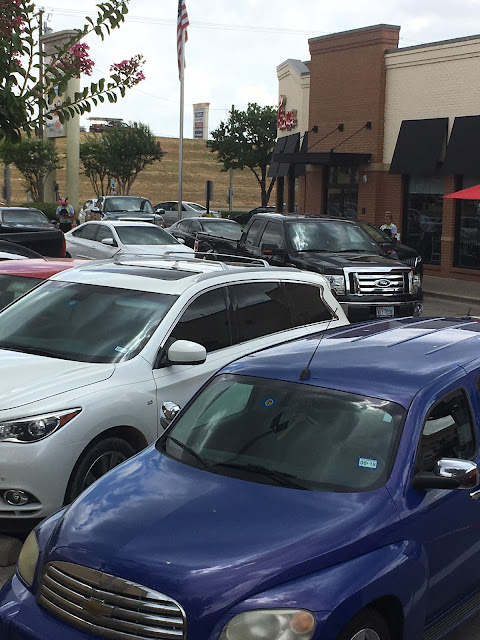 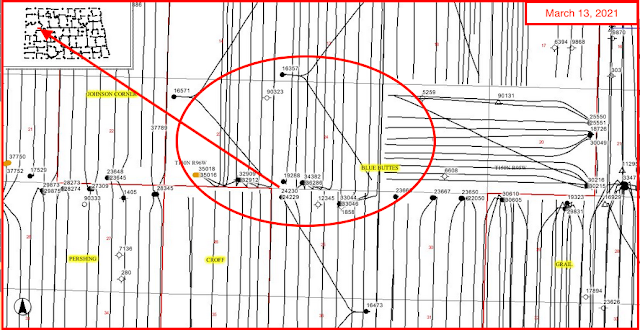 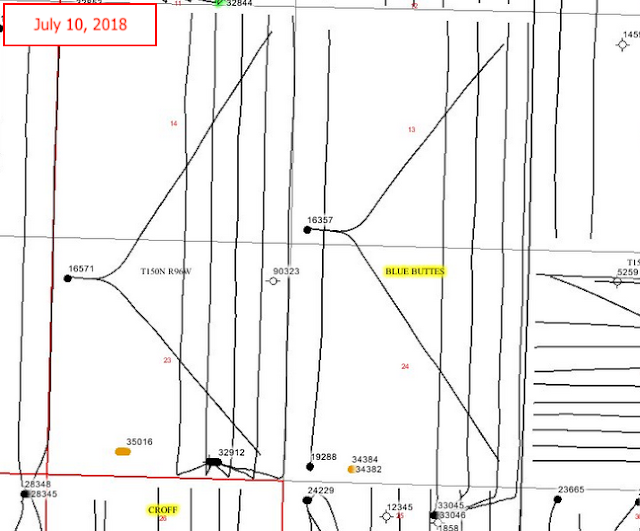 February 11, 2019: updated; full production profile here. first drilled in 2006; re-fracked in 2017 and the "new" well is better than the "old" well; this will be the Bakken going forward; we've discussed this often.

Look at the "small" re-frack.

Nice jump in production for this well:
Monthly Production Data:

Look at the cumulative production for this well: over  600K in less than six years. After that last jump in production, the well went over 600K. Whoo-hoo. Bakken wells will produce for 30 years and will undergo multiple re-fracks.

Disclaimer: I am inappropriately exuberant about the Bakken and generally do not update the poorly performing Bakken wells. Just saying.
Posted by Bruce Oksol at 10:27 AM No comments:


OAS: huge beat on both revenues and earnings;

CBS: Moonves beats on top and bottom lines; but CEO under #MeToo scrutiny; big question was whether Moonves was "on the earnings call." He was. He will survive the #MeToo scrutiny.

TSLA: "not as bad as expected"; Elon Musk says company will show a profit in every quarter going forward;


Shares jump 3.3%, up almost $5/share. Also raising full year guidance. But look at that difference year-over-year -- that's the big story. One quarter ago, $1.35; this year, $2.82. Trump tariffs -- apparently CAT not affected. Tax reform -- probably a huge reason -- what companies are allowed to expense to expense in one year.


Shares of Xilinx Inc. were up 9.8% in after-hours trading Wednesday after the company reported better-than-expected quarterly results and issued an outlook for the current quarter that exceeded analyst projections. The supplier of programmable logic devices reported fiscal first-quarter net income of $190 million, up from $157 million a year earlier. On a per-share basis, the company posted earnings of 74 cents, up from 59 cents a year ago. Analysts had been expecting 71 cents in GAAP EPS, according to FactSet. Revenue for Xilinx rose to $684 million in the quarter, up from $603 million in the year-earlier period. Analysts had been projecting revenue of $674 million. The company forecast revenue of $700 million to $720 million for the fiscal second quarter, whereas analysts had been expecting $680 million.

F: misses on earnings; but beat on revenues; shares down; apparently at 5 1/2 year-low.

Alcoa: huge beat; $1.52 adj vs $.132;  shares down on the news; investors not impressed? guidance was down; this was the first "metal" to report after tariffs announced;

PEP: haven't seen the numbers but Fox said PEP smacked their earnings out of the ballpark.

Bitcoin: not for the faint-hearted -- 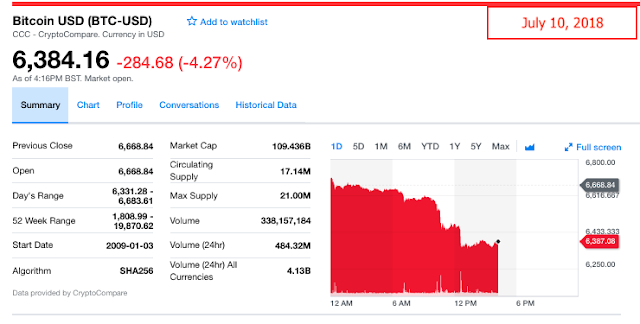 Pardon the interruption -- before we get to the Venezuela story, this first. It looks like the Trans Mountain Pipeline Expansion project is a sweet deal. Both First Nations and Alberta appear likely to compete for / share an equity stage in the pipeline.
Now, back to Venezuela.

Reuters says Venezuela crude oil imports to the US "bounced back in June, 2018." That surprised me.


[Venezuela] exported 563,962 barrels per day of crude to the United States last month (June, 2018), 5 percent above May figures and the largest volume since August. Exports of DCO slightly surpassed 250,000 bpd, the highest level since May 2017, according to Thomson Reuters trade flows data.

Back-of-the-envelope:
Let's look at EIA data. Most recent EIA data available only through April, 2018, monthly US imports from Venezuela:

So, Reuters says:
We'll have to wait to see the official EIA data which should be available soon.

Now, imagine if the numbers vary that much between various sources for every nation that imports and/or exports oil ....

Disclaimer: I often make simple arithmetic errors and often misread articles.
Posted by Bruce Oksol at 9:03 AM No comments:

The market: yesterday at noon, when the market was up about 300 points, I rushed home to watch "Power Lunch" on CNBC; they were discussing Tiger Woods and golf (an advertisement for the upcoming golf tournament to be televised by NBC). I turned it off. Later in the afternoon, while waiting to pick up Sophia, turned on CNBC again to see the market close. The CNBC senior market analyst, with the market up 300 points, was trying to talk the market down -- "too rich; over-valued" -- now this morning, after the Dow was up 320 points yesterday, at the opening the Dow is up another 100 points. It looks like taking GE out of the Dow 30 and replacing it with a pharmaceutical made a big difference.

Only one well comes off the confidential list today:
Active rigs:


After treading near the 79-Bcf/d level this past spring, Lower 48 natural gas production surged about 1.5 Bcf/d higher in the last three weeks of June to record highs approaching 82 Bcf/d by month’s end. The supply gains suspended the market’s bullish view of the persistently large storage deficit compared with last year and the five-year average and reeled in the prompt CME/NYMEX Henry Hub futures contract from the $3/MMBtu mark — at least for now. Where did the gains occur and how much of that influx truly is new production versus volumes returning from seasonal maintenance? Today, we examine the drivers behind the recent production jump.

No wonder the Brits want to Brexit ... 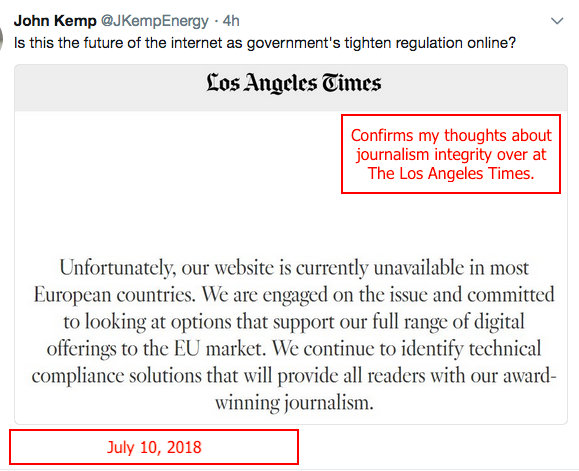 And folks think Trump is extreme. Wow.
Posted by Bruce Oksol at 7:39 AM No comments: