Wow! Is This Historic Or What! -- Sixteen Months Into Trump's Presidency -- Six Months Ago Pundits Worried About Trump Taking Us To War On The Korean Peninsula -- April 26, 2018 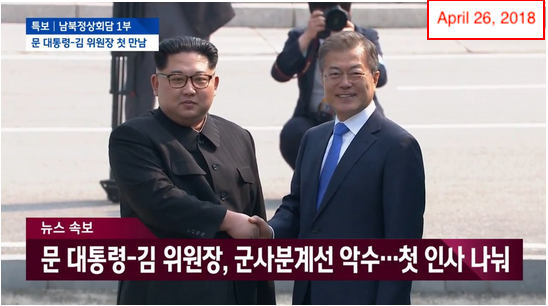 Next year, Time magazine cover -- "men of the year." 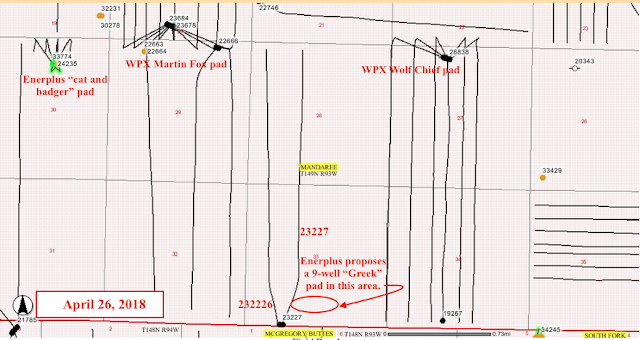 
A tank containing crude oil or asphalt exploded at a large refinery in Wisconsin on Thursday, injuring several people and causing a blast that one worker described as sounding like a sonic boom.

No fatalities have been reported, but at least five people have been taken to hospitals in Duluth, Minnesota, following the explosion at the Husky Energy oil refinery at about 10 a.m., Superior Fire Chief Steve Panger said in a statement.

Panger didn't have details about the extent of their injuries. Others were walking wounded.

A contractor who was inside the building told WDIO television that the explosion sounded like "a sonic boom" and that it happened when crews were working on shutting the plant down for repairs.

Panger said the fire was out by 11:20 a.m., although smoke could be seen rising from the plant. Panger said a small tank exploded containing either crude oil or asphalt.

A reader tells me that Enbridge "feeds" this refinery. On Monday of this week, a Minnesota administrative judge ruled that Enbridge's plan to expand its Line 3 pipeline could go forward.
Posted by Bruce Oksol at 4:00 PM No comments:

Starbucks meets/exceeds and yet shares are down significantly -- giving back its entire recent gain. But look at Amazon! Delivers huge profit surprise. "We've never seen companies of this size grow at this rate." Shares up 4% at the market close, and after results released after hours, Amazon up almost 7%.
A snarky note: Expedia, among the "travel" sites, did very, very badly. Shares are up, but the story is quite bad. If there's one television ad that I dislike the most: Trivago.

CNBC poll for Amazon HQ2 site:
I can't argue with Pittsburgh -- a good choice. For fulfillment centers -- yes, Pittsburgh seems high on the list -- location, location, location. But for a headquarters -- need to be near a) the nation's movers and shakers (Washington, DC - northern Virginia area); and, b) the nation's bankers, Boston. So as much as I  would like to Amazon HQ2 in north Texas, my bet is somewhere along the northern I-95 corridor.


The next natural gas fill/withdrawal data will be released by the EIA tomorrow (Thursday, April 26, 2018).

This is what is/was forecast.


How did that forecast work out? Actual results:
As predicted by Platts, it looks like this will be the "longest stretch" for natural gas before "turning the corner." 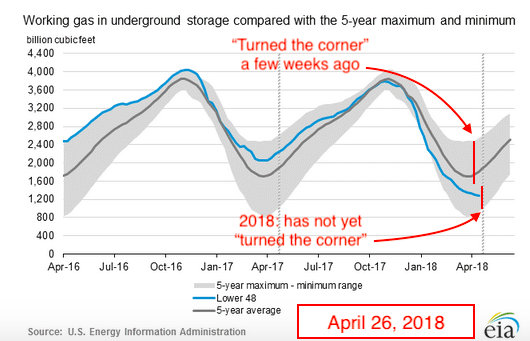 Thoughts On BP's Comments That It Underestimated Renewable Energy -- April 26, 2018

I posted this about an hour ago, but it's worth re-posting.


Don't get fooled by the headline: BP admits it underestimated renewable energy growth. Near the end of the story --

When I think of shale oil, about the last company I think of is BP. I very, very seldom see BP involved with shale oil.

My hunch with regard to the the BP/CEO stating unequivocally that "BP underestimated renewable energy growth" is this: this is his attempt to get investors to look at what BP really, really underestimated -- how fast US shale oil would grow.

It's an old media trick.


There is a limit to how big a role US shale can play in the global oil market, according to the chief executive of BP, who said traditional producers such as Saudi Arabia would continue to exert more influence over crude prices.

Bob Dudley said he had become less worried about the extent to which US shale resources could hold down prices as more was learned about their geology. “There are cracks appearing in the model of the Permian being one single, perfect oilfield,” he told the Financial Times, referring to the region of Texas and New Mexico at the centre of the shale revolution.

Yes, both Mark Papa (former CEO/EOG) and Bob Dudley talk about the challenges in the Permian -- but they are all logistical (mostly takeaway capacity) and those challenges will be addressed. Successfully.

Now, the second story, the Permian is projected to be the largest oil patch in the universe. Data points from Bloomberg:
What was not said, about the Permian:
It looks like BP underestimated renewable energy and the US shale oil revolution.
Posted by Bruce Oksol at 11:33 AM No comments:

Wow! "ConocoPhillips crushes earnings views ahead of Exxon, Chevron results." Link here. Wow, wow, wow ... this will please Warren -- transcript here --
Disclaimer: this is not an investment site. See disclaimer. Do not make any investment, financial, travel, job, or relationship decisions based on what you read here or what you think you may have read here.

Don't get fooled by the headline: BP admits it underestimated renewable energy growth. Near the end of the story --

Truly amazing what our high school history textbooks left out. It would be hard to find a period in British history that would be worse than what the Brits did to China in the first half of the 19th century. Not to be taken out of context, but the Holocaust comes to mind.


Kodachrome, Paul Simon
Posted by Bruce Oksol at 9:40 AM No comments:

Making America great again: and the tariffs have not even been imposed yet -- the bully pulpit ...

The US trade deficit: drops in March for first time in seven months. The trade gap sinks to $68 billion in March, 2018, down 10% from almost $76 billion in prior month.


The Labor Department said initial claims for state unemployment benefits dropped 24,000 to a seasonally adjusted 209,000 for the week ended April 21, the lowest level since December 1969. Economists polled by Reuters had forecast claims falling to 230,000 in the latest week.

The best news: I was not at home, so I did not have to listen to Steve Liesman explain how the numbers are really not as good as they seem once you peel back the layers of the onion.

From econoday, unemployment claims:
The market? Ho-hum. Up a paltry 120 points after a huge "correction" earlier this week. I'm using the word "correction" very, very loosely.

Report: TransCanada buying up Nebraska land for ... yes, you guessed it ... the Keystone XL. The pipeline lives. A lot of story lines in this Platts report:


TransCanada is now acquiring land in Nebraska for its planned Keystone XL oil pipeline, aimed at shipping incremental volumes of Western Canadian barrels to the US Gulf Coast for local refining and also providing options for exports ...

The need to acquire new "easements" -- handing over long-term access to land without transfer of ownership -- came after the Nebraska Public Service Commission decision, which approved an alternate route ...

In November (2017), the NPSC upheld its decision to allow TransCanada to build the 830,000 b/d Keystone XL pipeline system on an alternate route.

The Nebraska regulators approved the 'mainline alternative,' which heads east sooner towards the existing Keystone pipeline and parallels it for 96 miles.

A final investment decision is widely due for the Keystone XL system that will ship crude from Hardisty, Alberta, to Steele City, Nebraska, and link up with the Keystone pipeline that runs through Cushing, Oklahoma, to the USGC.

... TransCanada said in January it has sufficient customer support to go ahead with construction of the pipeline in 2019.

Ford: is getting out of the North American auto market. Repeat: Ford appears to be getting out of the North American auto market. Will refocus only on SUVs and trucks.
... the company announced Thursday that it's shuttering the last of its US sedan brands as it shifts its focus to international markets, trucks and SUVs. It is a drastic move, as the company will be phasing out sedan models that have a long history with the company, including models like the recently revamped Ford Taurus.
Posted by Bruce Oksol at 8:53 AM No comments:

NOG, press release:
The graphic: note, the NOG press release did not have the text that I've put on this graphic. I could be way off, but I think this is fairly accurate: 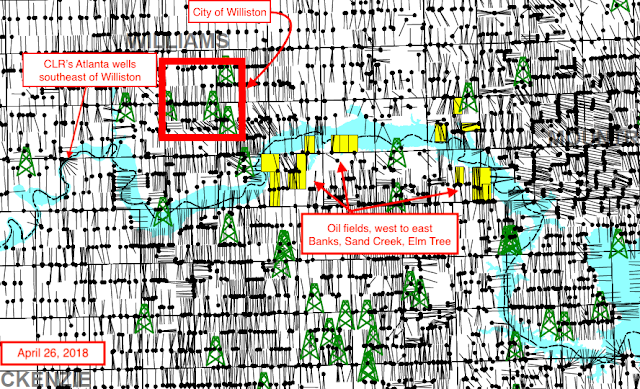 
RBN Energy: costly logistical headaches for Permian crude E&Ps, part 4. I do not know, but I have not heard much about crude-by-rail yet in the Permian. While driving through a very, very small part of the Permian recently, I saw no CBR.


Large-scale and well-funded producers in the Permian have built dedicated gathering systems and signed up for pipeline-takeaway options to keep their barrels moving to markets at the Gulf Coast and Cushing.

For the most part, smaller producers don’t have the same options, for a variety of reasons. More and more, barrels from outside the core areas of the Permian are competing for the last bits of pipeline space and producers are being forced to rely more heavily on Permian trucking companies to help keep their crude flowing. Truckers are being asked to make less desirable, less economical and longer hauls, and are passing those costs back to the producer. With pipeline takeaway capacity maxed out, trucking capacity is being pushed to the limit too, with several potential upstream impacts. Today, we look at trucking options for smaller producers in second-tier production areas, the impact of boom-bust cycles on trucking companies and what tight trucking capacity means for the basin as a whole. 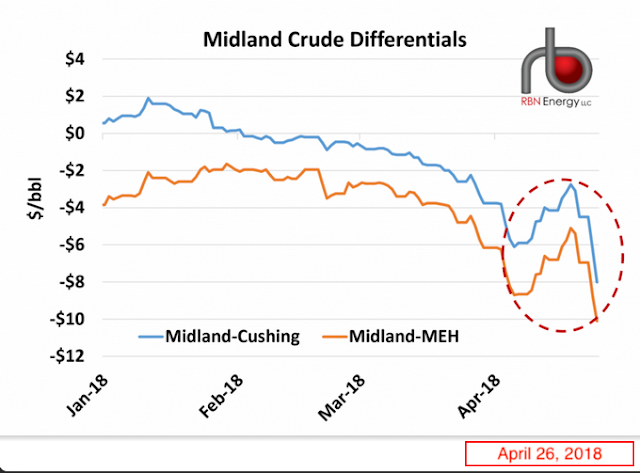