Anyone struggling "emotionally" over current events, this will put things in perspective: Destination Tokyo with Cary Grant, 1943. TCM, thank you.


A reader sent me this recipe to take my mind off things, telling me it would cure almost any malady.

I stopped by the neighborhood grocery store this a.m. to get cinnamon rolls for breakfast. Fresh bread was just being delivered but I did not need any eggs. And, of course, no Clorox, but in the big scheme of things, everything else.

There was very little beef but there was enough. They are doing a great job keeping up. But then I found a 3.3-pound pork shoulder. Wow. It was near its expiration date so it was selling for half price. I paid about $5.50 which comes out to about $1.75/pound. What a deal. And, wow, the pulled pork came out perfectly. Thank you to the reader who sent me the recipe.

The pulled pork recipe is outstanding. It turns out, that after a day of being refrigerated (and then being re-heated, of course) it is outstanding. I would not change the recipe at all.
Highly, highly recommend toasting the hamburger buns.


“We are now looking at a scale of surplus in the second quarter we probably never have seen before,” said Bjarne Schieldrop, chief commodities analyst at SEB.

Until now, the biggest annual contraction was recorded in 1980, when it tumbled by 2.6 million barrels a day as the global economy reeled under the impact of the second oil crisis.

Flashback: in 1973, we thought the world was running out of oil. Now, as far as one can project, the world will never be short accessible and affordable crude oil and gasoline.


One new permit, #37465 --
One permit canceled:
One producing well (a DUC) reported as completed:

The video is nine minutes long but worth every moment.

Biden's campaign: wow, this is incredibly embarrassing. I cannot believe his staff let it be released. Besides incredibly bad content, this is incredibly amateurish. For the archives: after having disappeared for the past several weeks, it was announced late last week that the Democrat front-runner would begin a weekly (?) podcast. This is the first. It is quite clear the Democrats (and perhaps even Biden's staff) are looking for someone other than Biden. How else would you explain this podcast -- taking us all the way to the 40's. He also mentioned the 20's and "everyone" thought he was talking about the 1920's. LOL. He quickly clarified that he was talking about the 2020's or 2020. That part was not clear. Most shocking: he was suggesting the US military release gas masks to protect us from the virus.

Trillion-dollar bill, phase 3: the Democrats have blocked the bill; apparently a lot of friction on "the Hill." It tells me this "crisis" is not all that serious if it's politics as usual. Most voters know the purse strings are controlled by the US House, and the US House is controlled by Nancy Pelosi, Chuck Schumer, and the squad. If the GOP can't use this to their advantage, well, what can I say?

Big winner coming out of this crisis? Amazon. I can't say it enough. [Later: four boxes from Amazon arrived today for our household here in north Texas. In addition two boxes will arrive for our three-week-old grandsons in Portland -- formula -- later this week. I used to "track" Amazon packages but they are so dependable I no longer track them. Early on, years ago, I lost a package or two, but hasn't happened since. I'm careful where I have them delivered.]

Tesla: will it survive?

I have Sophia for the entire week. We stopped at a grocery store to pick up cinnamon rolls. We didn't need anything else. But I did pick up some pork to make pulled pork today. Other than cleaning supplies and eggs, the store had everything one might need, but the store was pretty bare. I assume deliveries will begin again today.

Drop off a rental car.

Pick up a piece of new Stickley furniture -- a very small end-table -- ordered some time ago.

I haven't yet decided if I will have Enterprise drive me home after I drop off the rental car, or walk. It would be about a 60-minute walk and Sophia would be with me. She would ride on my shoulders most of the way. So, we'll see.

So, blogging today may be significantly delayed.


Wells coming off the confidential list today, over the weekend, --


Statewide shelter-in-place orders, worldwide business shutdowns, market meltdowns, medical calamities. Much of what is going on right now is unprecedented in the modern era, and there are no guideposts to help predict what happens next to the world as we knew it. But in the boom-bust energy sector, it is déjà vu all over again. We have seen steep drops in prices, drilling activity and production enough times to have some idea about how this is likely to play out. Granted, this time around it is particularly bad, but that doesn’t change the sequence of events that we are likely to experience over the coming months and years. Today, we’ll look back at what happens to Shale-Era basins after a price collapse, focusing on the inherent lag between a major reduction in activity level and the inevitable production response.

Anybody who thought the $4.85/bbl increase in crude oil prices on Thursday was anything other than a head fake was kidding themselves. The price of CME/NYMEX Cushing WTI crude oil for April delivery (the last day of trading for the contract) fell by the end of the day to $19.46 before the settlement was posted at $22.43/bbl, down $2.79/bbl. The WTI May contract closed at $22.63, down $3.28/bbl. Forget fundamentals. Crude oil prices are now totally dependent on the next news flash, press release, rumor or stock-price shock. About the only thing we can be sure of is that it is likely to be a long while before we see the sunny side of $50/bbl crude oil again.

Producers are responding to that harsh reality by cutting their capex budgets even deeper than their initial 2020 plans. Even before last week’s price carnage, the 42 E&Ps that we cover in the RBN blogosphere had announced that their total capital spending would be cut by 26% from previous guidance and a reduction of 36% versus 2019. No doubt we’ll see many more cuts in the coming weeks. But there are a couple of important things to note. First, with only a few minor exceptions, E&Ps are still drilling, collectively planning to spend tens of billions of dollars to bring more oil and gas to the market. Second, these companies are in survival mode. Consequently, those billions are being spent drilling the sweetest of the sweet spots using the most productive drilling and completion equipment out there, so volumes are not falling off nearly as fast as are capex dollars. For example, on March 16, EOG Resources announced a 31% capex reduction but said that it expects 2020 production to be flat compared to last year. Granted that’s down from their previous guidance of 10%-14% growth, but it is not a decline. When all the guidance comes in with first-quarter results, we expect that our universe of companies will come in collectively somewhere around a 6-8% decline in production targets.

Down, but not out. 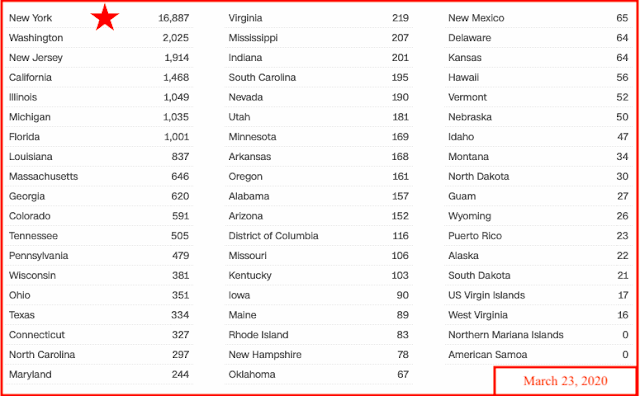 Incredibly useless data but that's what the media is reporting.

Apparently the NYC subway and bus schedule has not been changed despite .... 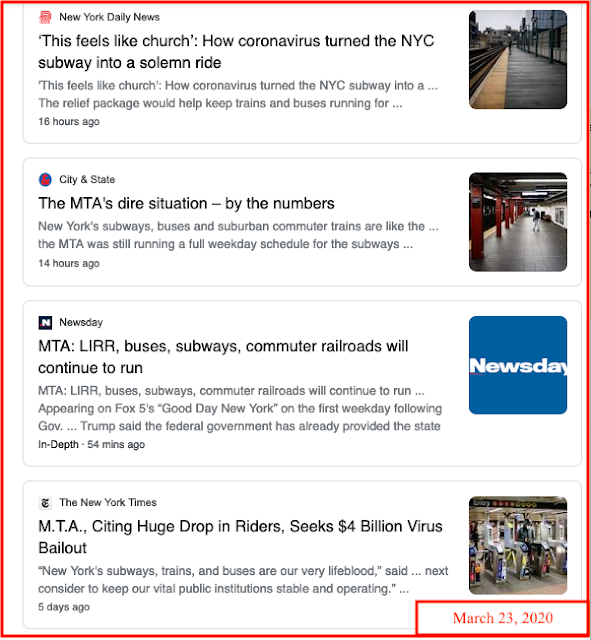