The Oasis Peregrine Well On The South Side Of Williston Has Just Gone Over 500K Bbls Crude Oil — March 25, 2021

The BR Guadalupe Well In Charlson Oil Field Has Been Updated -- March 25, 2021

Production for a very interesting well has been updated, the well:

Warren Buffett wants to beat Biden to the infrastructure buildout!

This simply reminds us again how big the fracking revolution is.

Over at social media: faux environmentalists are really faux-upset. Another said, "The green academic crowd (that have never had a real job in energy) always tell us that wind / solar are cheaper. I wonder what Buffett is seeing they don't.

The original Plano well holding the lease by production:

All Three Indices Set New Records? Not Sure If I Heard That Correctly But I Think That's Correct; CLR With Seven New Permits -- March25, 2021

Apple bought the most artificial intelligence companies from 2016 to 2020. 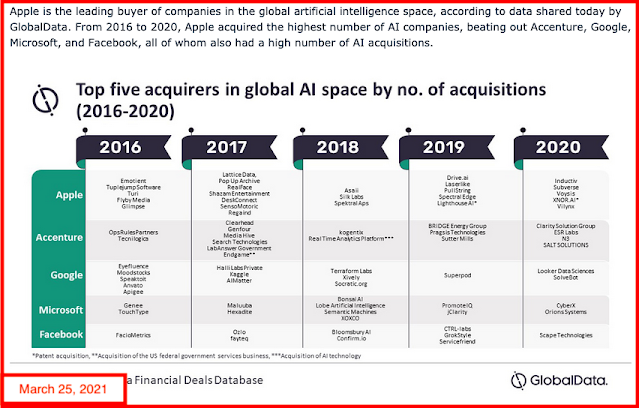 Over the course of the last several years, Apple has bought companies like Emotient, Turi, Glimpse, RealFace, Shazam, SensoMotoric, Silk Labs, Drive.ai, Laserlike, SpectralEdge, Voysis, XNOR.ai, and more, all with the aim of improving the AI and machine learning capabilities of its products and services.

Rigs matter OR shale operators can't hold back: after promising to focus on free cash flow, and not increase production, it looks like drillers can't hold back. At least not in the Permian. From twitter this afternoon:

Kinda makes one wonder about the IEEFA story on free cash flow.

Imagine this headline in the United States:

Texas and Louisiana now have at least -- repeat, at least -- four major new refineries under construction. Most of these new refineries along the Gulf Coast are expected to produce plastic feedstocks, such as ethylene and propylene.

Instead, we get this headline: President Biden kills they Keystone XL which would have brought much needed Canadian heavy oil to US refineries along the Gulf Coast.

In fact the actual headline is this: China has at least four major new refineries under construction, most of which are expected to produce plastic feedstocks, such as ethylene and propylene.

The article at the link is chock full of interesting data points.

The world leader in refining:

That Suez ship: it may be in worse trouble than we are being told. From a reader who knows this stuff pretty well. First note earlier this morning:

Long story short ... ships are not designed to 'sit on the ground'.

If this fully-laden, 1,200 foot long ship is resting on bottom anywhere along its keel  (certainly a portion of its bow area is right now), the unbalanced structural stresses could be enormous.
If any cracks develop, the ship will take on water and no longer be simply a floating obstruction ... it will be a sunken one.
Removal could be several months up to a year depending upon many factors.

Then this, from later this afternoon:

Upon much closer inspection of pictures, not only is the bow 20 to 30 feet higher than the stern, there is a noticeable list to port side. (VERY bad implications there).

Evidence of hull leaking growing, not receding.
Ramifications too numerous to elaborate.

Next 48 hours could be pivotal.

And, so there we are. How fast can "they" get Huey helicopters there to start air-lifting containers off that container ship, if that's even possible.

Email ThisBlogThis!Share to TwitterShare to FacebookShare to Pinterest
Labels: Road_To_China 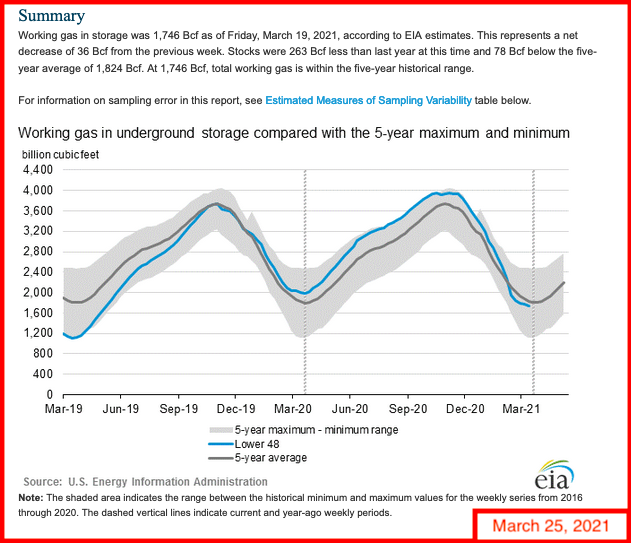 Posted by Bruce Oksol at 1:13 PM No comments:

This is the problem, or should we say "challenge"? Link here. 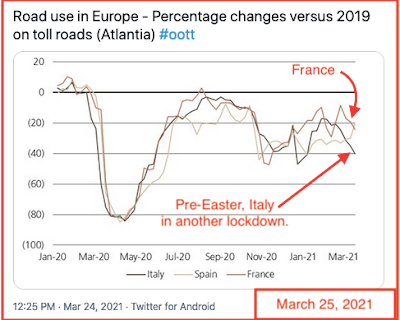 Following the money, not for investment but:

RBN Energy: converting hydrogen's units is an accomplishment in itself.

When it comes to energy markets analysis, there’s nothing quite like spending the better part of an afternoon piecing together a long chain of unit conversions only to find the next day you’ve misplaced the sticky notes on which you wrote them.

We’ve all been there, though for most of us it’s become commonplace to memorize the few hydrocarbon conversions needed to get through a lunch or happy hour.

Unfortunately, the same cannot be said when it comes to hydrogen, which brings its own set of unique units of measure, many of them not usually bantered around your typical business development discussion. Crunching through them is tough, in our experience, and we find ourselves writing them down over and over again. Which gave us an idea: why not write a blog on the topic? Fortunately, we are in that business, and today we continue our series on hydrogen with a look a green hydrogen production projects and the math needed to make sense of them.