I thought I had posted this story; maybe not.


The La Paloma natural gas plant in California filed for bankruptcy last December because it was not getting enough operating time to cover its costs due to solar and other renewable energy receiving preference.

The plant, which serves as back-up to the state’s renewable generating technologies, was also denied a reliability charge by the state that would have allowed it to continue to operate.

The owners project an annual loss of $39 million without a reliability contract or other support. In its bankruptcy filing, the plant owners listed assets of between $100 million and $500 million and liabilities of $500 million to $1 billion.[i] La Paloma is a 1200-megawatt merchant plant located 110 miles northwest of Los Angeles and is able to serve both the San Francisco and Los Angeles markets.

Closing out the poll in which we asked: quick, without looking, what percent of GDP does US spend on defense (2016 data)? Answer: a paltry 3.3% (many sources; here's one). Respondents:
Now for a new poll. For background to this story, see this link. Will Warren Buffett prevail? Yes or no. See poll at sidebar at the right.

Too bad. Lots of natural gas "they" can't reach with current technology:


An estimate by the British Geological Survey found in 2013 that Central Britain, which includes the prospective Bowland basin, could hold between 822 and 2,281 Tcf (23.3-64.6 Tcm) of gas-in-place, the lower figure representing P90 reserves -- a 90% probability -- and the higher figure P10 reserves -- a 10% probability. Although these figures are huge in comparison with the UK's proved conventional gas reserves, which at end-2016 were just 7.3 Tcf, they do not represent recoverable gas.

The unemployment rate among young Americans fell this summer to match the lowest level in nearly a half-century.

There was an 18-month-period, from late 1968 through mid-1970 that clearly had some of the best music ever.

This was the year of Woodstock.

The Beatles were still going strong, but touring less, and would soon stop completely.

Led Zeppelin's first two albums, Zeppelin I and Zeppelin II, were released in 1969.

The era of "free love" and the uncertainties of the Vietnam War probably contributed to some of this really incredible music. Speaking of the Vietnam war, I turned 18 in 1969. My lottery draft was July 1, 1970; my lottery number was 103. The highest lottery number called for this group was 125; all men assigned that lottery number or any lower number, and who were classified as available for military service, were called to report for possible induction. I would have been deferred by virtue of being enrolled in college. I was worried that I would be called up before I graduated from college. I was convinced, but wrong, that the war would still be going on when I graduated from college.

Page B1 of today's Wall Street Journal: how to ease the pain of laptop shopping.

Cut to the chase: what's one laptop the writer would be happy with right now? the 13-inch HP Spectre x360 -- starts at $940.
Microsoft Surface: survey suggests 25% of Microsoft products were having problems by the of their second year -- much higher than for other brands

MacBook Air?
Which Mac laptop is worth buying? many reasons to buy a Mac, but ...

Previous grants came from the FAA; the most recent grant came from US DOT.

Note to self: send memo to CNBC talking head who noted there has been no new airport built in the US in 23 years; and, seemed more concerned about pot holes in NYC.

Note to self: send memo to Art Berman, author of "the beginning of the end for the Bakken."

Another great example of public-private partnership.

Close but no cigar (source): gasoline demand came close to beating last year's record demand, but didn't quite do it. It will be interesting to see how gasoline demand is affected by the "great migration" on/about August 21, 2017. They say this will be the greatest one-week migration in the history of the US. 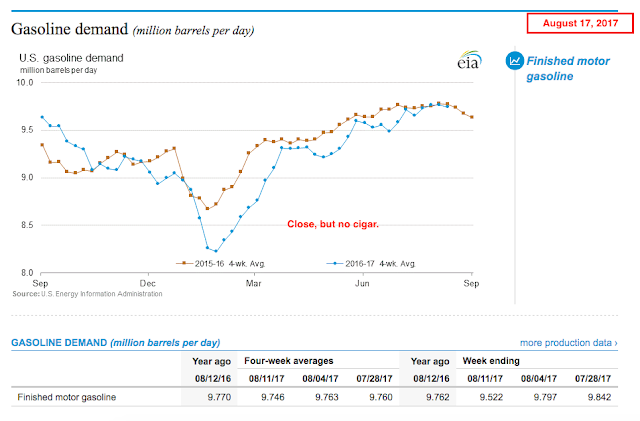 First well to be fracked in Illinois -- getting close.


Iraqi field-level production data appears to show it has deepened crude output cuts, but methodology changes are the more likely explanation. And data from international oil firms show output from the semiautonomous Kurdistan region to be much higher than the federal government's estimate.

Baghdad is facing pressure to improve its compliance with the production deal struck between Opec and several non-Opec countries. Argus estimates Iraqi output has been 4.45mn b/d so far this year, making it just over 50pc compliant, compared with Opec's overall 101pc compliance rate. Iraq agreed to cut output by 210,000 b/d from an October 2016 baseline figure determined by secondary sources, including Argus, to 4.35mn b/d until March next year. Production data from the federal government in Baghdad put output at 4.54mn b/d this year.

Iraq's low compliance led to an appearance before a joint ministerial monitoring committee meeting earlier this month to discuss its future production plans. Saudi Arabia's oil minister Khalid al-Falih made comments after a meeting with his Iraqi counterpart Jabbar al-Luaibi on 8 August that could be interpreted as a public hint that Iraq needs to improve its compliance.

Iraq's production published two days later in Opec's latest Monthly Oil Market Report (MOMR) showed output at 4.4mn b/d in July, down by 150,000 b/d from June. A regional breakdown for July, provided by the oil ministry, shows a decline of 374,000 b/d when compared with the previously-published breakdown for September 2016, before the Opec agreement. The biggest fall comes from state-owned North Oil, (NOC) followed by the Kurdistan region (see table).

An explanation for the large drop from NOC could be a methodology change. The ministry's September figure for NOC included production from Bai Hassan and Avanah Dome, in Kirkuk, even though these fields were taken over by the KRG in 2014 to prevent them falling to Islamist group Isis. Production from the two fields totalled 275,000 b/d in September last year.

Data from the Kurdistan Regional Government (KRG) placed the region's output at just over 560,000 b/d for the same month in 2016, similar to the federal government's estimate but including production from Bai Hassan and Avanah Dome.


Husky produces primarily heavy oil from oil sands and conventional operations in western Canada and the deal will help it manage exposure to depressed global crude prices, which are hovering below $50 a barrel on concerns about a persistent supply glut CLc1.

Husky said it would retain about 180 workers at the refinery, which can process Canadian heavy crude and light and medium barrels from Canada and the Bakken region, and also boosts the company's asphalt production capacity.

Disbanding the president's "strategy" and "economic" councils. Catching a bit of CNBC this morning suggests that disbanding the councils may have been the smartest thing Trump ever did. LOL. A lot of mainstream America saw 20 "fat cats" sitting around the table talking to the president about cutting their taxes. Most of the CEOs seemed to have nothing in common with Trump except making money: they seemed to disagree with him on immigration, climate change, healthcare, trade with China, etc. This now leaves Trump listening to his "own" people and not getting advice from social liberals, like Tim Cook, et al. Big winner? Bannon? I don't know, but the question is being raised.

Cheap money. Speaking of Tim Cook -- Apple just set a record borrowing cheap money -- link here.  Data points:
Jobs: the jobs data posted yesterday was in error. Weekly jobs data will be posted today. A comment to that post would be lost so I've re-posted that but it will show coming from me: it did not. It came from a reader. Jobs report:
Deplorables: word on the street -- "if deplorables no longer shop at Wal-Mart, it won't matter." This follows reports that the Wal-Mart CEO is really, really angry with President Trump. Wal-Mart shares down over 2% in pre-market trading and pulling the overall market down.
Posted by Bruce Oksol at 7:00 AM No comments:


RBN Energy: are the Capline Pipeline and LOOP about to enter a new era? A must-read.


The stars may finally be aligning for two related crude oil infrastructure projects that, if undertaken, would provide an important new pathway to overseas markets for Bakken, western Canadian and other North American crude. The first would involve reversing the Capline Pipeline, which was built to transport crude north from the U.S. Gulf Coast to Midwest refiners.

The second would make modest physical changes to the Louisiana Offshore Oil Port — better known as LOOP — to allow the crude import facility off the Bayou State coast to load crude onto ships, including Very Large Crude Carriers (VLCCs). Today we look at the new infrastructure and market forces that may finally spur Capline’s reversal and lead imports-focused LOOP to enable exports.