I think I vaguely recall reading about this once upon a time, a long time ago, but if I did I had completely forgotten. Years ago when trying to learn something about an "unusual" name in the Bakken I looked up Slawson -- maybe I will try to find that post, later.

Whatever. I mention all that because a reader just sent this comment:


Jamba Juice is actually a division of the Slawson Family Corp. Listed under their "Wellness" division on the Slawson Corp website. FYI

Googling, from the Slawson Companies website -- who says you can't do it all?


OILFIELD INNOVATOR, COMMUNITY BUILDER, JAMBA JUICER WHO SAYS YOU CAN’T DO IT ALL? From its inception in 1957 as an oil and gas exploration company – a wildcatter in industry lingo – Slawson Companies has diversified into commercial and residential real estate development, restaurants and hotels. Today 950 people in 10 states work for the family-owned company, where being a good corporate citizen is more than just a pipe dream.

And then this at the top of the website:


“The Slawson Family wishes to extend their sincere condolences to the family of Aubrey McClendon. Aubrey was a driving force and visionary in the oil and gas industry, building Chesapeake Energy from its infancy in 1989 into to the second largest producer of natural gas in the United States. Aubrey’s vision, persistence and dedication were not limited to his business endeavors but extended to his community. We are lucky to have had Aubrey as a member of our oil and gas community and even luckier to have had him as a dear family friend. We will miss him.”

Obviously the site/contents are dynamic and the above may not be there later.

This came up because I noted that Jamba Juice headquarters was moving from California to Texas; I did not know/mention that Jamba Juice was part of Slawson. A reader caught that. Much appreciated.

I have two bike routes I take on a regular basis.  Both are almost exactly the same distance: one is exactly 5.0 miles; the other is 5.2. The former is entirely urban and a bit dicey with the traffic due to road construction; the other route is "rural", looping around the north side of DFW airport.

The "urban" route swings along three small farms. The first farm has always had cattle on the land; I suppose about 40 head counting the calves in the spring. But for the longest time this spring, they have been absent. It appeared they had been sold. But today, off in the distance I saw them. So, that was good.

The second farm had five horses last year that were always out to pasture. My hunch is that they were older horses living out their last few years. The owner treats them incredibly well. The horses are not out in the pasture on the hottest days of summer but are always out when the weather is nice and a bit cooler.

This year there is one horse missing. He/she is so consistently missing I assume he/she is gone forever, having passed away sometime over the winter.

Finally, the third farm with pasture on both sides of the road. Like the first farm I had not seen the cattle this spring. It was all very strange. But today the herd was back, about 20 head, it appears with an occasional calf. The huge bull that I normally see in another fenced off field was not out.

But with cattle back at both farms and four horses out in the pasture, all is right and well with the world.

I'm back in my Bob Dylan phase, just for the record. More on that later, perhaps. But not likely.

The books I'm reading now:
Krauss is a bit hard to read. It's not the subject matter; it's his style. And it seems there is a significant typographical error which has really confused me. I noted it the first time I read the book; I'm reading it much more slowly the second time around and the error (?) continues to confuse me. I won't say more because it would be way too difficult to explain.

My favorite of the four: Kean. He might be a bit flippant but overall it's really good. Before reading it, I would recommend reading a wiki entry on DNA, then James Watson's book on DNA; and then this book. The title is obviously a take-off on Stephen Jay Gould's The Panda's Thumb.

Lind's The Wright Style is simply a coffee-table book that I enjoy paging through and reading bits and pieces now and then.

Finally, Subliminal. It looked good at Barnes and Noble but I haven't really gotten into it yet. My hunch is that it will dovetail in a strange sort of way with Kean's book on DNA.

While reading Kean (see above), I came across Lewis Carroll's use of "writhing," page 72.


Art noveau, descended from Arts and Crafts, appears in the stylings of landscape pictures such as The Valeof Sirion, which Hammond and Scull compare to the work of Danish fairy-story illustrator Kay Nielsen. The writhing forms of illustrator Arthur Rackham have often been perceived in Tolkien's depictions of trees.

The reference to art noveau, and Arts and Crafts, is a dot that connects, of all things to The Wright Style. Frank Lloyd Wright was a student of the Arts and Crafts movement.

But it turns out that it was "closer to home."  "Wrigthe" is discussed in depth in a book I have read a couple of times and is one of my favorite in my library: JRR Tolkien: Author of the Century. In this book, the author argues that "writhe" has given rise to several other words: wreath, wroth, and wrath.


What has anger got to do with writhing, with being twisted? Clearly -- and there are parallels to this - the word is an old dead metaphor which suggests that wrath is a state of being twisted up inside.

Posted by Bruce Oksol at 4:50 PM No comments:

#31057 is on a 5-well pad. The site location is interesting but because the horizontals running north/south are CLR wells, this MRO well (as well as the others on this 5-well pad) are most likely going to run to the east. If so, the perforations in the horizontal cannot begin in section 34; the first perforation must be in section 35. 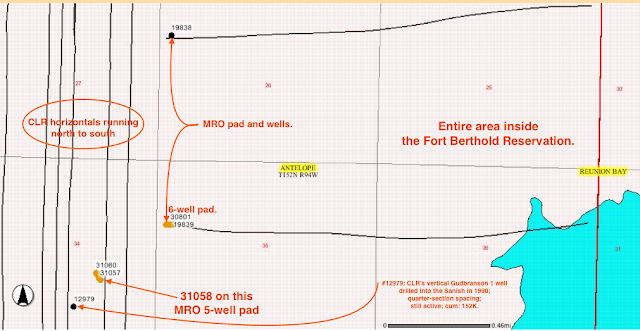 Later, 11:26 p.m. Central Time:  now that there no more borders we can do away with passports and passport control at JFK, LAX, DFW, and ISN, I suppose. For 36 other dumbest things ever said, click here.


Original Post
I would imagine that John Kerry's argument that in the future there will be no walls and using technology as an analogy, we should dispense with "userid" and "passwords."

A "physical wall" paid for by Mexico on "our" southern border may or may not be the answer but certainly a country that does not have an interest in controlling its borders is probably asking for a bit of trouble.

The bigger question is when John Kerry will suggest that US airports with arriving international flights plan on eliminating "passport control."

The fact that "we" still require passports at international airports here in the US suggests that the flood of immigrants coming from Mexico is much less than the number of folks who would simply fly in if there were no passport controls. It would be fun to see the numbers, but to be honest, I'm not exactly sure why we even bother with passport checks any more. It reminds me of the gun issue. If we outlaw handguns only criminals will have handguns. The analogy doesn't work perfectly but the gun issue still reminds me of the passport issue now that John Kerry argues there are no more borders.

It also reminds me of the time my (then) eight-year-old younger daughter once asked me why there are locks on Wal-Mart doors when the sign says "open 24/7." 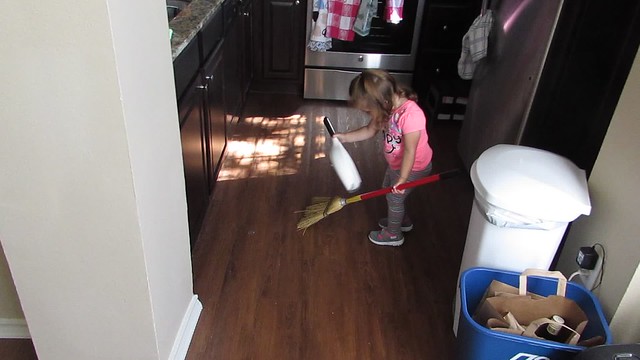 I've mentioned numerous times that "they" really take sports seriously here in Texas. I thought I had seen it all until I saw "soccer madness" yesterday. There is so much to say but I will say little.

Suffice it to say that yesterday, our club hosted a 4v4 "Soccer Madness" tournament. This is something I had never seen before. It's sort of like "arena football."

All teams play on a small field, the size fields that toddlers play on, and players are as old as 18 years of age. The teams play with four players on the field. There appear to be three forwards and one defensive player. There is no goalie. The goal is the same size as the goal used by toddlers.

Yesterday, in Richardton, north Dallas, at the University of Texas Dallas three hundred (300) local soccer teams came to play 4v4. Each team played three games. At the end of preliminary play, which ended about 5:00 p.m., teams were seeded for the championship round which began at 6:00 p.m.

Our granddaughter's team did not advance but that did not bother her enthusiasm at all. Regardless, she had an "end-of-season" soccer party to go to as part of yet another league as soon as the last game at "Soccer Madness" was over. It never ends.

Outside the play area -- some 20 fields, I suppose, the 300 teams congregated under their individual tents.

The first video is of "tent city" to give you an idea of what the area looked like. 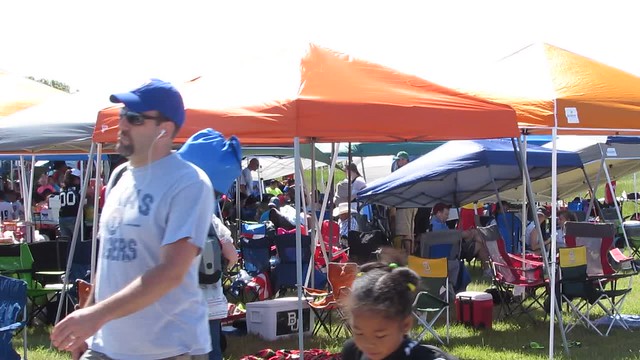 It was a day of family fun. The games did not "count toward" any season standings [update: my daughter tells me the games DO count toward season standings, and the top 4v4 teams will be invited for the 3v3 tournament]. In addition to the games, there would be a jersey competition. Teams were encouraged to come in specially-designed outfits for the game. The second video shows an example: 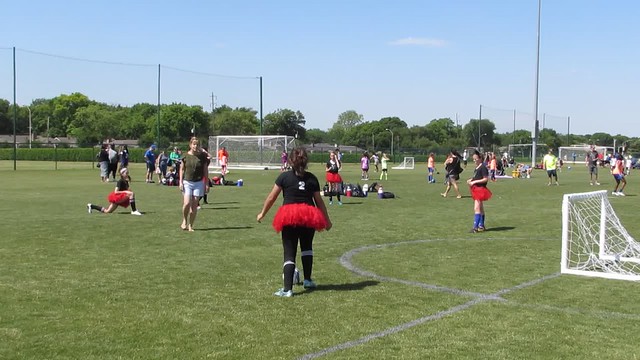 This is a short clip of the second game. You can probably guess which is our granddaughter -- in specially designed "camo" tops: 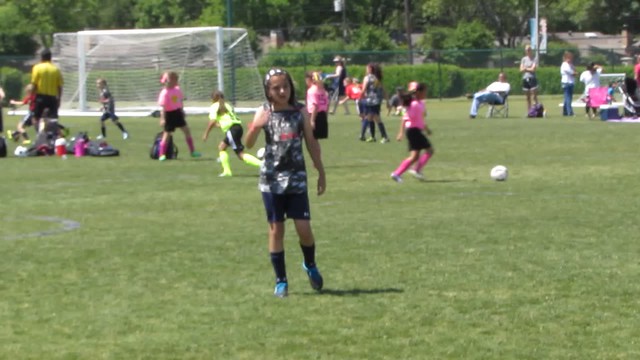 This is a brief glimpse of our daughter and granddaughter in their "camo" outfits and under the tent: 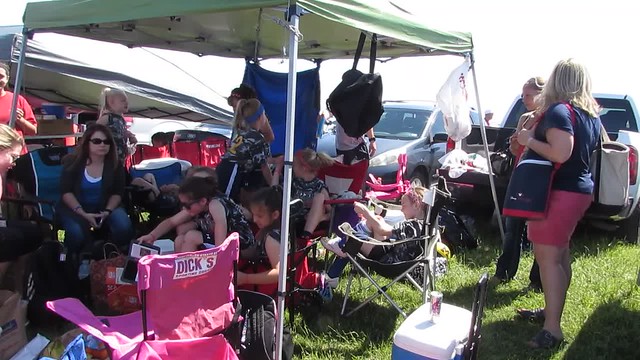 And finally, some other entertainment for those waiting for their next game: 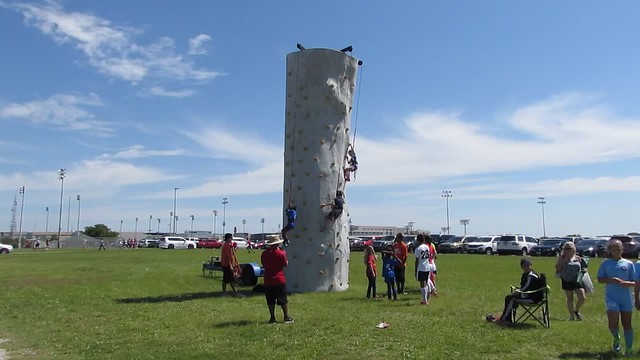