Fracked:
On same pad, next to be fracked:
Will affect:
Might affect:

It certainly looks like #29211 might have been re-fracked (although not the production jump one would expect with a re-frack) but no data at FracFocus and no sundry form to suggest this well was refracked:
Recent production data: 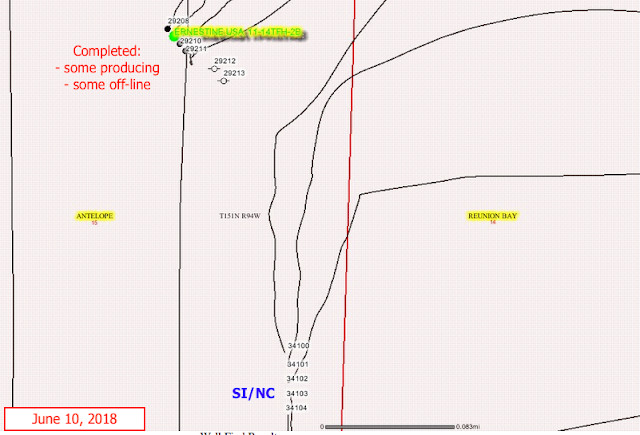 In 1421, The Year China Discovered America, Gavin Menzies, c. 2002, spent a bit of time discussing cotton and its genetics. Fascinating. So, after spending much of today reading about cotton and genetics (on the internet), I coincidentally find this article on cotton at The Wall Street Journal:


China is re-emerging as a major consumer of U.S. cotton after years of stockpiling the fiber, a shift that together with poor growing conditions in Texas has sent prices surging to a six-year high.

The world’s most populous nation has purchased futures contracts covering more than 361,000 bales of U.S. cotton for 2019-20, according to U.S. Department of Agriculture data. That is enough to make 400 million T-shirts. China has never booked that much cotton that far in advance at this time of year, in data going back to 1998.

“It’s very unusual to have that many bales in the books,” said Peter Egli, risk manager at Plexus Cotton Ltd. “China is the biggest taker of forward sales.”

China’s return to global cotton markets is likely to mean a period of higher prices for a fiber used in most apparel, textiles and upholstery. It is also a boon to U.S. producers who have long labored under a market whose prices investors perceived to be capped by China’s cotton stores, which for years have accounted for more than half of all global stocks.

China announced this month that it intends to raise cotton import volumes, a move that could increase Chinese purchases of American fiber at a time when the Trump administration is calling for more imports from the U.S.

Just some of the wells of interest from wells that came off the confidential list in 2Q14. 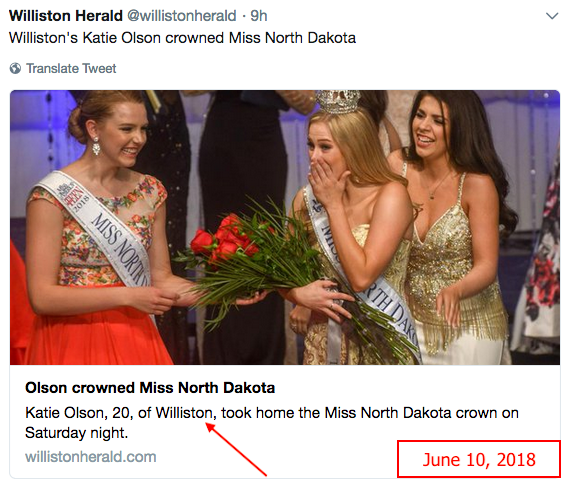 Note: although it was scheduled, and pre-announced, effectively President Trump walked out of the G7 conference -- leaving early and not agreeing to sign any joint communique. The G7 conference, by all criteria, was a dismal failure. Trump saw that coming and left early.


For Iran, the so-called “Axis of Evil” has boiled down to a party of one, as President Donald Trump prepares for direct talks with North Korea.

With Saddam Hussein overthrown and Kim Jong Un now preparing for a planned meeting in Singapore with Trump, Iran remains the last renegade among former President George W. Bush’s grouping of nations opposed to the U.S.

For those in Tehran, whether hard-liners, reformists or people simply trying to get by in Iran’s worsening economy, it’s head-spinning, especially after seeing Trump pull America out of the nuclear deal with world powers.

“I am buying my insulin shots at double the price only because of Trump’s decision,” fumed Najmeh Songhori, a 35-year-old diabetic mother of two standing in front of a pharmacy in central Tehran. “Meanwhile he is trying to reach a deal with North Korea. Who is going to trust him?”

It wasn’t supposed to be like this. Excited crowds flooded the streets after the 2015 nuclear deal that Iran struck with world powers, including the U.S. under President Barack Obama.

The deal saw Iran agree to limit uranium enrichment in its nuclear program, which the West feared could be used to build a nuclear weapon. For Iran, which long has maintained its atomic program was for peaceful purposes, the deal took the shackles of sanctions off its economy and opened up its oil sales abroad.

No one believed it would bring massive change to Iran, which remains a Shiite theocracy overseen by Supreme Leader Ayatollah Ali Khamenei. But many hoped it would encourage further negotiations and normalize Iran’s relationships with the wider world.

So, insulin has doubled in price because of Trump. Everyone blames Trump. Even Soros. Much more at the link.

My thoughts exactly. From Fox News:

You know you’re getting somewhere when your opponents are all attacking you in the same way.

So President Trump should feel a strong sense of satisfaction with a job well done after leaving the slightly pointless Group of Seven (G-7) summit in Canada on Saturday for another likely far more consequential summit in Singapore with North Korea dictator Kim Jong Un.

Tariff-free zone: so why not a "tariff-free zone" among the G7? Hmmm? Now that's a thought. Why do the most wealthy nations in the universe even need tariffs?

One of the best rebounders in his day. One of the most compelling NBA players to watch in his day. I don't recall watching him with the San Antonio Spurs but I often tuned in to a Chicago Bulls game just to see him play (Rodman, not Trump): 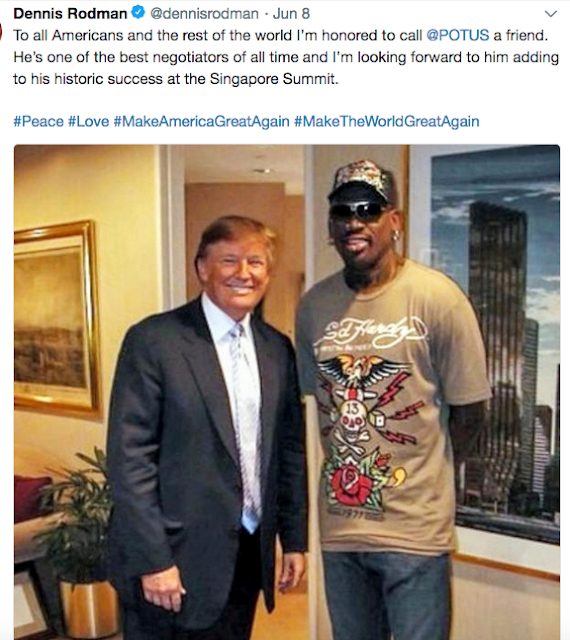 Funny How Things Turn Out 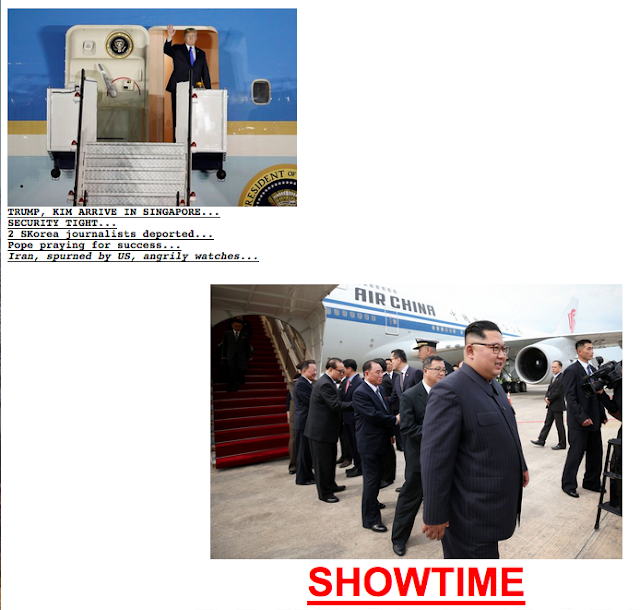