Final draft. Final post within the next couple of days. It was still in "final draft" on May 18, 2019, but did not see any need to edit. So the final draft is the final post: top stories for the year, 2018.

Top stories by month for the year, 2018, are linked here.

Permits in North Dakota, by county, by field, by operator.

Most surprising story of 2018: Paris burns;

The most egregious story to come out of the Bakken: ND's "high water mark" land grab

The US: second longest economic expansion in history recorded; on track to become the longest;

Most exciting small non-operator in the Bakken: NOG;

Most exciting micro operator in the Bakken: Kaiser-Francis

Most exciting small operator in the Bakken: Bruin

Most exciting medium operator in the Bakken: Oasis

CBR: rumors that LNG by CBR could be the next big railroad story

Refining: Davis refinery near the park is still on-track;

Investment story of the year: shorting the price of oil;

Bakken economy (too many to list): new Williston airport remains on track

The Bailey oil field is tracked here. Unless some other operator surprises me in the last three months of this year (2018) it's going to be hard to name some operator other than MRO "The Operator of the Year for 2018."

Look at the run of incredible wells by MRO in Bailey oil field (below).

In addition, MRO appears to have the most aggressive re-frack program in the Bakken.

This one has been driving me nuts. I've been following it for months (years, it seems) and could never explain the jump in production despite the fact that it had not been re-fracked.  See production profile below. See this post; and, here.

Finally the answer -- in this graphic: 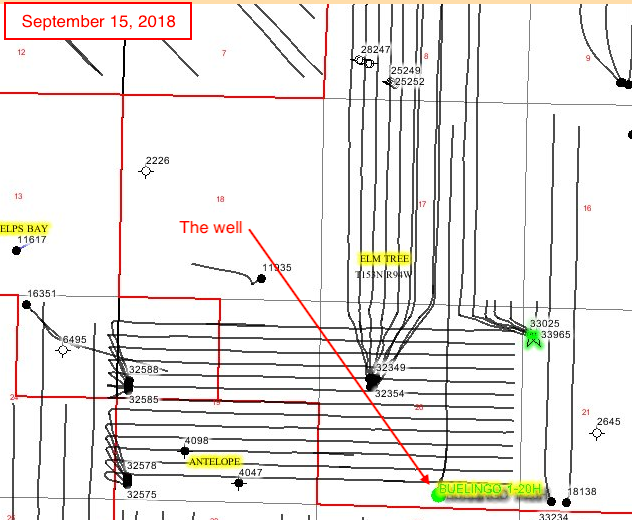 Posted by Bruce Oksol at 7:40 PM No comments:

For those who do not understand LNG (and that includes me), the post I just completed should be helpful.

I wish I could hang around and do some more blogging, but lots of biking, lots of errands.

I may not be back on the blog until late this evening.

There will be lots of factual / typographical errors to fix.

For newbies: it is impossible to convey how incredible the US oil and gas sector is right now. There's no question in my mind that we would not be where we are had it not been for the policies President Obama set in place during his tenure. He was absolutely correct: "We just simply can't drill our way to lower oil prices."

He was right. It wasn't simple. The oil sector needed some really well-trained and dedicated roughnecks and truckers who were willing to show up to work 24/7 during some of the worst North Dakota blizzards ever.

The oil companies needed hundreds (thousands?) of incredibly well-trained geologists coming out of engineering programs across the entire US (and a few from overseas, I suppose).

It required CEOs, bankers, investors willing to invest like drunken sailors. (Sorry, if I insulted anyone, and I probably did.) The risks they took were incredible. Some lost big; some are winning bigly.

And, the technology -- drilling two miles deep; turning on a dime -- going horizontal for two miles, all through a seam maybe 40 feet thick but a 2-foot target, and total vertical depth measured to the nearest inch after going down two miles.

No, I don't think it was simple. Barack was right. It's not simple.

The easiest thing President Obama could have done was approve the DAPL but he left that to President Trump to make the latter look good and keep his campaign promise to make America great again.

Comments are disabled. Too much spam.

I won't get to my e-mail until later this evening.

The plural of "haiku" is "haiku." It follows neither the Greek nor the Latin rules for plurals.

And the New York Times spells "fracking" with a "k."

By the way, there are 73 really, really smart people reading the blog. Thank you. 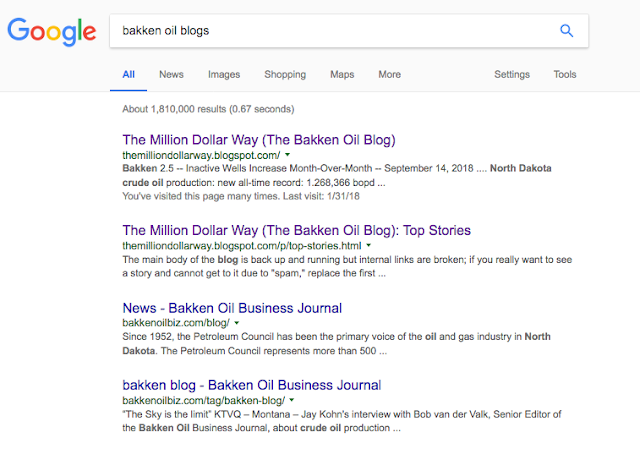 LNG: Tons, Tonnes, Cubic Feet, Cubic Meters, Million, Billion, Trillion, M, MM, B, T; And The Number Of Angels Dancing On The Head Of A Pin

Later, 5:47 p.m. CDT: back to more serious matters. For everyone, quick, what was the estimate for natural gas (dry) in the Bakken in the USGS Survey of 2013? From the survey:

For newbies, the USGS is always considerably conservative.

The Zohr? See this post. Thirty trillion cubic feet. The operator plans to max out at 2.9 billion cubic feet day. That works out to be about thirty years of production. Amazing how the law of large numbers always seems to work out.


Later, 5:29 p.m. CDT: a reader thanked me for clarifying LNG and how it's measured and sold. The reader said, that with regard to angels dancing on the head of a pin, more information was needed --

If the angels are in Texas doing the Cotton-Eyed Joe, each angel will need her very own pin (;>)  Same would hold true for polkas at a ND wedding dance.

With regard to the "drum" we need to know the number of angels in the "drum group." Generally there are four members in a drum group but the groups can be far larger -- requiring a second pin, perhaps. As for placement, except in Oklahoma where the drum is in the center of the dance floor, the drum would be on the large circle between the inner circle of dancing angels and the outer perimeter of spectators.

This is a long, long post, but I think the best bit was this, and yes, the writer actually says it ... near the bottom of the post, and I quote verbatim:


The question I always get is how long does one TCF of gas last? The answer depends on ... how fast you take the gas out of the reservoir.

LOL. I haven't had so much fun since I read Art Berman's analysis of the shale revolution.

I may have posted this years ago. I don't know. If not, I should have. From Bharat (Bob) Shah over at LinkedIn, he begins:


If you are associated with any aspect of an LNG plant, you know that the LNG plant capacity is always specified in tons per year. And that the LNG onshore storage is always in cubic meters and so is capacity of LNG carriers. And then LNG is sold on dollars per MMBTU. The heating value is in BTU/SCF. The gas flow coming in the plant is referenced in MMSCFD and the reservoir capacity is TCF.

And that's the problem:
So, Bob makes it very, very simple:
I assume we're about to get to the number of angels dancing on the head of a pin.

So, a few more calculations, and we get to, and I can't make this up either, 1TCF approximates (we've been using "equal" signs until now, but now it's an approximation) 18 MM tons of LNG

Why the approximation? Because of the following assumptions:
Another assumption: US $8 / MM BTU (this was back in 2016).

This next comment is refreshing: "The conversion from tons to cubic meters is simple." Well, perhaps not:


The onshore storage and the LNG carriers have a fixed capacity just as for any other liquid storage systems. This capacity is always measured in cubic meters. Why not in barrels or cubic feet, one may argue. It has always been in cubic meters and majority of LNG customers use metric measurements. The conversion from tons to cubic meters is simple. (Interestingly enough, I don't think Bob actually shows the "conversion." Instead, he jumps into the issue of shipping).

Most LNG plants have at least two LNG tanks. Some may be a bit smaller in capacity.

Unlike crude oil tank farms, one can’t justify LNG tank farm as the LNG tanks are very expensive (LNG is stored at minus 260 deg F).

In order for LNG train(s) to keep running, the LNG must be loaded into carriers regularly. The typical LNG customer will be thousands of kilometers away from the LNG plant. The LNG carriers move slowly at about 20 knots, so several LNG carriers must be on their way to ensure onshore tanks are available for continuous LNG production. It is not profitable to curtail LNG production because the next carrier is still a few days away. The LNG shipping logistics is very complicated and must be worked out along with lining up LNG purchasers.

Okay. Now, all of a sudden, a new way to measure LNG: "TCF stands for trillion cubic feet of gas. BCM is also used and it stands for billion cubic meters."

The question I always get is how long does one TCF of gas last? The answer depends on the composition of the gas and how fast you take the gas out of the reservoir. The heavier components have to be removed before liquefaction but they count in the reservoir capacity. In addition, there will be other impurities and gases such as CO2, H2S etc. On my last project, the reservoir capacity was known to be 120 TCF. Our Hysis runs for a case indicated that one TCF of wellhead gas produced about 18 million tons of LNG. For the two 5 MPTA trains, the reservoir had enough gas to last 216 years. So there was plenty of gas for more trains. And the project did consider plans for future mega trains that would give total LNG park capacity to 100 MPTA. Without making adjustment for NPV, the 100 MPTA Park and 120 TCF corresponds to 840 billion dollars of LNG.

In his next post: how many angels dance on a head of a pin? Assumptions:

Bakken 2.5
Re-fracking: MRO in the Bailey