Didn't Tampa Bay just win the Stanley Cup, also? It seems I read something along that line.

The videos are way too short! Wow, she had fun. So precious!!

If I purposely check the stock market, I post at least a quick note on the blog. I haven't purposely checked the market in several weeks. When it gets crazy on the down side, I quit watching until the dust settles. Today, I finally looked when I saw the Xilinx story. I was curious. When did I last check out the market. Doing a google search on the blog the last time I posted the word "Dow" was September 15, 2020.

I can't recall if it was before that or after that, probably after, I bought some shares in something "on margin" I would get a lot of dividends in late September. I don't know how that turned out. It's all for the grandchildren decades from now.

But, wow, the market is again, doing well.

The number of cases is quite irrelevant but it is what it, so let's take a look.

Some time ago, a reader asked about these wells. I posted updates at numerous different posts, and it's too time-consuming to combine them into one post right now, so for now, some of the posts. One can find more posts on the Kraken by searching that blog for "Hobart":

Whoo-hoo! I was going to sleep in but I happened to wake up early and I checked The WSJ. The third story I saw: AMD in talks with Xilinx. Whoo-hoo.

Xilinx: I bought shares in Xilinx decades ago for one of our two daughters. I was blown away when I saw XLNX up 12% this morning. From The WSJ:

Advanced Micro Devices Inc. is in advanced talks to buy rival chip maker Xilinx Inc., in a deal that could be valued at more than $30 billion and mark the latest big tie-up in the rapidly consolidating semiconductor industry.

There is no guarantee they will get there, especially given that the talks had stalled before recently restarting

AMD’s market value now tops $100 billion after its shares soared 89% this year as the coronavirus pandemic stokes demands for PCs, gaming consoles and other devices that use the company’s chips. Second-quarter revenue rose 26% to $1.93 billion, while net income jumped more than fourfold to $157 million on the back of record notebook and server-processor sales.

The surge in AMD shares could embolden the company to make an acquisition using its stock as currency. Xilinx has a market value of about $26 billion, with its shares up about 9% so far this year, just ahead of the S&P 500’s 7% rise.

Look how bad the numbers are, as reported by USA Today:

A reader wrote to me about the low viewership. My not-ready-for-prime-time reply:

There are a lot of reasons for NFL, MBA, etc., crashing with regard to viewership.

We "hear" artificial noise from the stadiums to make the games seem more real, but there's no noise in the stadium. If one thinks about that, it simply seems like a "pick-up" game among a bunch of rich men, playing playground football or high school basketball. I don't think anyone is really taking it seriously, these games. They are essentially scrimmages. [This is slightly different than how USA Today tries to explain low viewership away.]
But, the "social justice," "BLM stuff" is tiresome. Just when you get involved in the game, they cut to a "social justice" commercial or a political ad to get you to vote, etc, and that completely irritates someone like me and I at least turn down the volume if I don't switch stations.
Some people say the bars are closed but unless they have a fudge factor of 100 people watching a game in the bar, the bars are few in number compared to home viewing.
People getting together for parties at home are also a thing of the past, but in the big scheme of things, I can't imagine that resulting in a lot of viewers.
I think it gets back to the "social justice" experience -- during the game, by the announcers, in the commercials.

It's why I won't watch (much) any more. I surf over to professional sports -- I can't take BLM at all; the NFL is tolerable but as soon as as "social justice" commercial comes on, I switch stations. 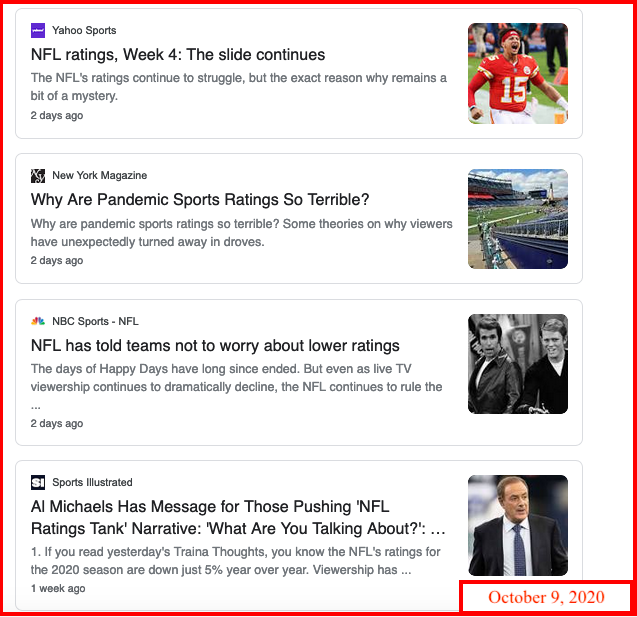 Screenshots From The Williston Wire --October 9, 2020 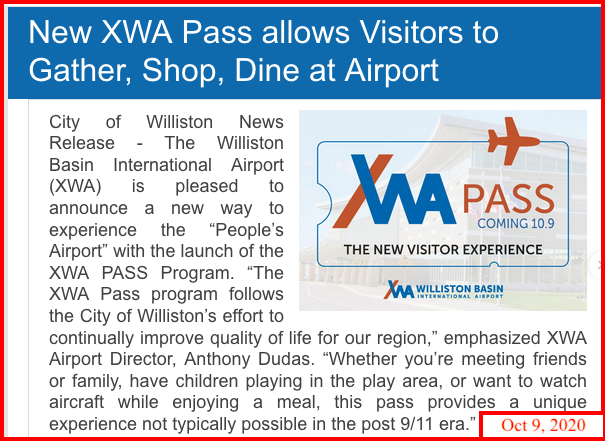 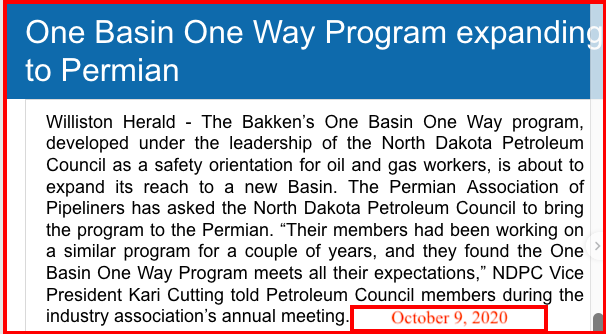 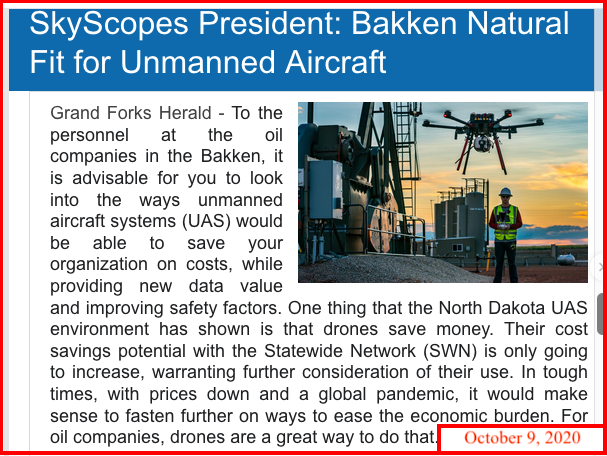 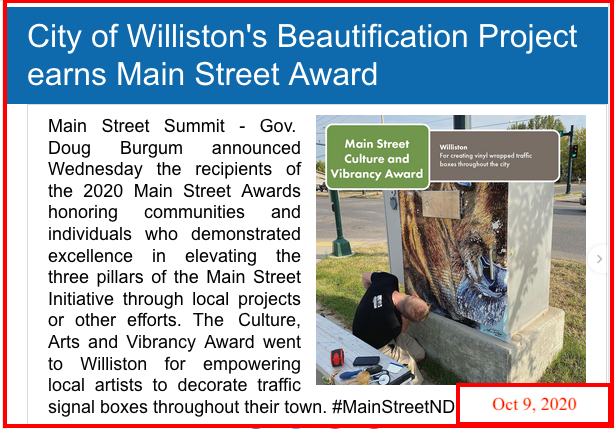 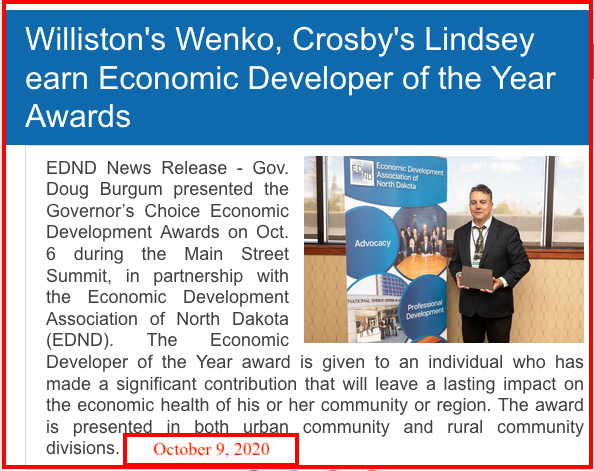 First things first: quick! what is the first thing that strikes you about this story -- Louise Glück awarded Nobel Prize in Literature? Other than the fact her last name contains an umlaut. Link here.

NYC broke: can't afford to pay its teachers the back pay they say they are owed. Link here.

You don't skip a debate if you're losing in the polls. Trump says "no" to next debate.

Yup. WSJ says the group most likely to get Covid-19 is least likely to die from it. Link here.

Social security: well, what do you know. Elections do count. Social security recipients to get "raise." Link here. With no inflation, there should be no jump in the COLA but, hey, it's an election year.

Lower for longer: 43% of economists don't see US gaining back lost jobs until 2023. WSJ survey.

The U.S. is by far the world’s largest ethane producer, and exports one-seventh of what it produces, with most of the exported volumes tied to long-term contracts to supply ethane-consuming steam crackers. Canada is the #1 importer of U.S. ethane, receiving its volumes via three pipelines. As for U.S. exports by ship, India is on top, followed by the UK and Norway. But watch out! China, which started importing U.S. ethane a year or so ago, is poised to buy a heck of lot more, with most of the incremental volumes to be shipped out of a new ethane export terminal about to come online in Nederland, TX. Today, we continue our series with a look at the Orbit Ethane Export Terminal, which is being jointly developed by Energy Transfer and Satellite Petrochemical, the U.S. subsidiary of a Chinese petrochemical company.

The Shale Revolution enabled the U.S. to become a leading producer of NGLs, including ethane. Just last week, the Energy Information Administration (EIA) reported that the U.S. produced a record 2.2 MMb/d of ethane in July 2020, and we estimate that around a million additional barrels per day on average this year has been "rejected" into the natural gas stream at processing plants and sold (at the price of gas) for its Btu value.

About 280 Mb/d, or 14% of total U.S. ethane production, is currently being sent to other countries, with about one-third of the exports being piped to Canadian steam-cracker customers on either the Vantage, Mariner West, or Utopia pipelines. The other two-thirds is being loaded on Very Large Ethane Carriers (VLECs) or smaller ethane carriers and floated to crackers in a number of other countries, with 63 Mb/d, on average, being shipped to India, 36 Mb/d headed for the UK, and 32 Mb/d bound for Norway. China is next — since September 2019, it has been receiving an average of 22 Mb/d of U.S. ethane, with 80% of the volumes being shipped out of Enterprise Products Partner’s Morgan’s Point export terminal on the Houston Ship Channel and the rest coming from Energy Transfer’s Marcus Hook facility near Philadelphia. 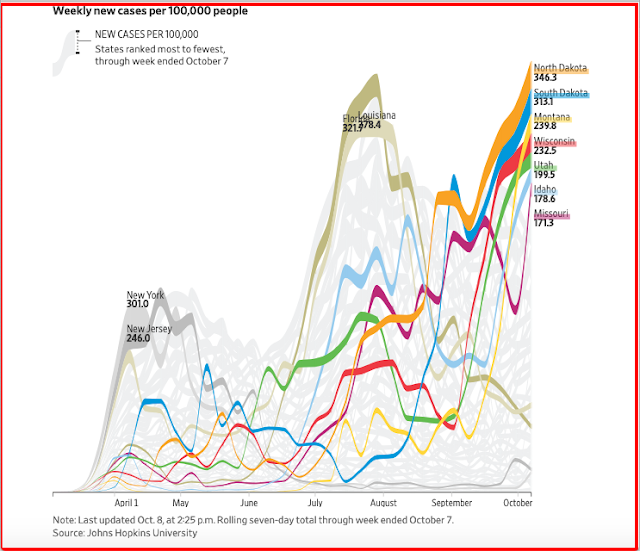 Lede, to help folks get around the paywall.

To chart the extent of the coronavirus pandemic, The Wall Street Journal’s trackers show the areas where Covid-19 infections are rising fastest, trends in new U.S. cases and deaths, and totals for countries around the world.

The graphics below are updated regularly, using the latest data available from Johns Hopkins University.

Chinese flu: why would one expect it to be any different?

Apparently CEOs don't (expect it to be any different).