Putting The Bakken In Perspective: The Bakken Vs Argentina -- June 15, 2015

[In the big scheme of things, this is idle chatter. Hardly worth posting.]

Reuters over at Rigzone is reporting:

Or more precisely, the arithmetic.

Disclaimer: I often make simple arithmetic errors. I assume there will be errors in the calculations below.

Step 1. Convert 2.54 million cubic meters to liquid bbls. The most difficult step may be getting the zeros right ... 2,540,000 cubic meters (if that's wrong, this whole exercise is for naught).

The Bakken choked back AND active rigs at an all-time post-boom low is producing more than 1 million bbls / day.

So, there you have it. I probably made an arithmetic error.

By the way, for those interested, compare to the chart at the EIA linked site with this lede in the Reuters article:

So, four counties in western North Dakota are out-producing Argentina despite all the headwinds facing the Bakken.
Posted by Bruce Oksol at 11:34 PM No comments:

Wells coming off the confidential list Tuesday:
Six (6) new permits --
Six (6) producing wells completed:
Four producers were abandoned; most were "old"; this was a more recent one:


"This well is uneconomic and has no uphole or leasehold utility." "The Bogner 13-20H is currently down due to a suspected tubing leak and is uneconomic to repair." This was a Three Forks well, stimulated with one stage on 2/16/12, and 4 stages on 5/7/12 with a total of less than one million lbs proppant (about 800,000 lbs).

Trivia: among the six producing wells that were completed, five were SM Energy wells; all of them have names associated with the NFL, although one of them is a bit out of the ordinary if it was indeed named for an NFL personality. 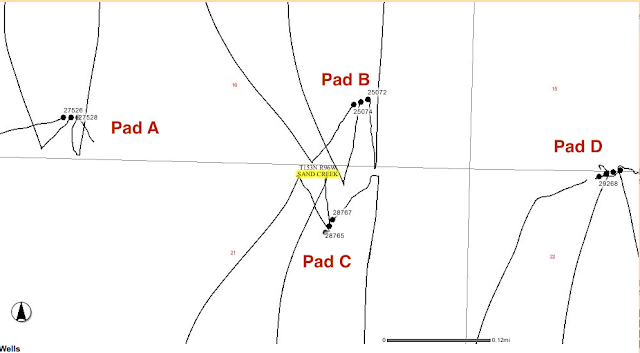 There are several story lines here, but I think I will leave it for now.
Posted by Bruce Oksol at 2:14 PM No comments: 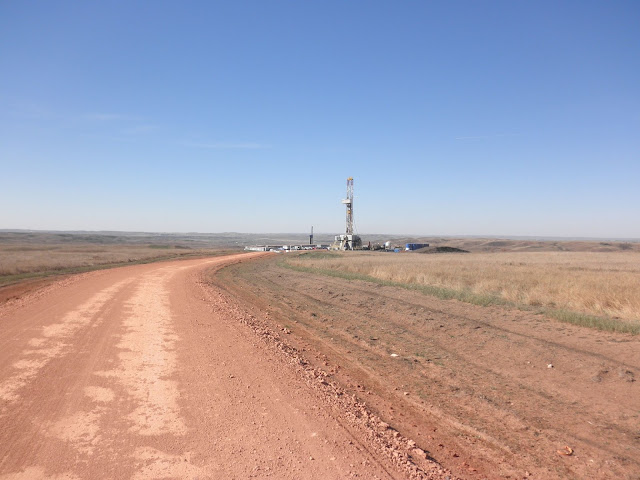 Note: in long posts like this, there will be factual and typographical errors. Do not use this as a source. It is for my use only as a way to keep track of the Bakken. You are free to do with it what you want but don't quote me on it or use it as a reference. If this is important to you, go to the source.

For newbies, Whiting's Tarpon wells in Sand Creek have been incredibly nice wells. I have written about them in many posts, but this is where I guess I track them, with IPs and updated production numbers. At least that's where the "family link" takes me.

It's possible I have a graphic of the Tarpon wells somewhere but I didn't quickly find a graphic, so perhaps it's time.

It was initially (and probably still is) confusing to me because Whiting has two areas with Tarpon Federal wells. 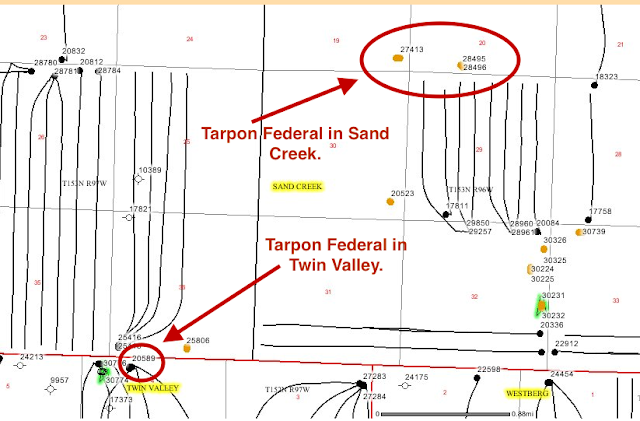 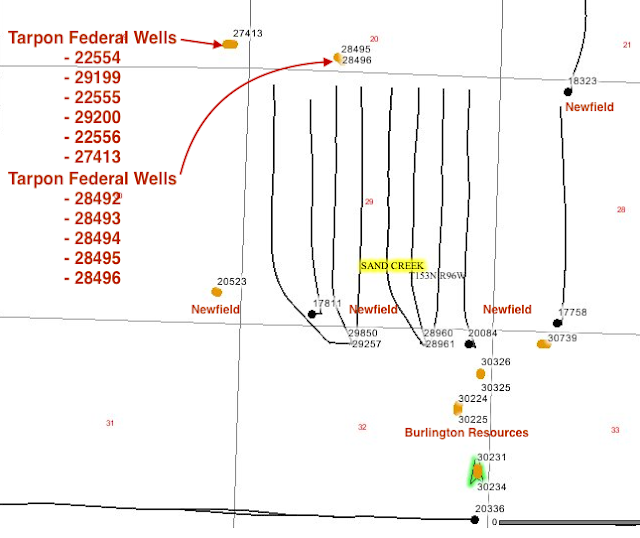 That adds up to fourteen (14) Whiting Tarpon Federal wells which agrees with the NDIC GIS map on this date.
Posted by Bruce Oksol at 11:12 AM No comments:

I had expected the Director's Cut to be released today, but The Williston Herald says it will be released this Friday.

Comment: there are some really huge wells being reported today. Then look how far some of these wells have been choked back, or taken off line for operational reasons (neighboring wells being fracked). So many story lines.

For example, look at this well. In the first 15 days of production, 32,000 bbls of oil, and then taken off-line for almost two months (in this case it might have been taken off line because neighboring wells were being fracked) but the result is the same:


There are at least four ways producers are able to cut back in the Bakken: a) complete the wells, but leave them on-line only some days of the month; b) complete the wells, produce every day, but "choked back"; c) drill to depth, but do not frack them; and, d) complete them but then shut them in. It appears that one producer may be doing this on a regular basis; I have to follow a few more months to see; the data is not yet scanned in the file reports to confirm.

The wells that came off the confidential list today whose production was cut way back was/were probably due to operational reasons associated with pad drilling (neighboring wells being fracked).

However, it is clear many wells are being choked back due to the slump in oil prices. I see that when I update production numbers from wells drilled as far back as 2013.

This is the story line that jumps out at me. Many analysts now suggest that the Bakken, Permian, and Eagle Ford et al, not Saudi, will be the swing producer, able to increase/decrease production quickly to meet supply and demand requirements. Someone suggested that it may not be all that easy for the tight / unconventional / shale / US producers to ramp up all that quickly. The argument is that too many rigs are idled, and too many roughnecks have departed the fields because of too little work. The argument is it would take several months to get those workers back and the rigs back up. When I see huge wells (20,000 bo per month) being cut back to 4 days of production or being choked back to 4,000 bo per month, this tells me it will be very, very easy for US unconventional oil producers to ramp up very, very quickly.

When you think about it, it's quite an amazing story. Assuming the producers remain solvent and can continue drilling, they are effectively storing their oil below ground -- not paying direct costs for storage, and yet they can turn on the spigot at a moment's notice. And they can pick and choose which wells they want to access.

The downside: it is my understanding that over time, sand and ceramic (proppant) deteriorate at depth.

The second story line is that some uninformed observes will see a Bakken well produce 20,000 bbls of oil in the first full month of production, and then drop to 1,000 bbls of oil the second month, and will alarm folks suggesting this is how bad the decline rate is in the Bakken.

Of course, it immediately follows that this will play havoc with folks like me who try to understand the Bakken decline rates and how much progress is being made to improve the rate.

So, again, I think the wells coming off the confidential list today that show huge drops in production in the 2nd, 3rd, or 4th months, that may be due to operational reasons associated with pad drilling.

This might be a better example, posted last week. It's difficult to know when wells are taken off-line due to operational reasons or for economic/financial reasons, and it's not all that easy to tell when wells are being choked back, but looking at many, many production profiles, one starts to get a feeling.
Posted by Bruce Oksol at 9:25 AM No comments: