Bruin has so many incredible Fort Berthold wells and due to the naming protocol for these wells, it is impossible to keep up with these wells. I'm not going to provide the usual back story. But again, another Bakken well demonstrating the Bakken phenomenon. Bruin has so many of these Fort Berthold wells showing this phenomenon it is impossible for me to post all of them. Full production profile of this well is at this post. It's worth going to the link just to see the initial production.

This well has not been refracked; it was put on a pump in March, 2018:
Full production profile:

The story has been previously posted, but there are some new data points in this Bismarck Tribune article:


Justin Kringstad, director of the North Dakota Pipeline Authority, projects the state’s oil production will increase from 2 million to 2.3 million barrels per day.

“We really want to see another large oil export pipeline,” Lynn Helms, director of the Department of Mineral Resources, said during the meeting.

Memo to self: notes to Art Berman and Jane Nielson.
Posted by Bruce Oksol at 4:19 PM No comments:

Entrepreneurial Story Of The Century? The Inventor Of This Deserves The Nobel Prize For Physics -- The Puck Floats -- November 12, 2018; And, Oh, By The Way, See The Real "Miracle On Ice"

This will drive the faux environmentalists nuts. The Canadians have found a way to ship oil completely, absolutely, positively risk free.

Congested pipelines have stranded much of Canada's crude in Alberta, driving discounts to record-high levels. Canadian heavy crude traded on Friday for less than one-third of the U.S. benchmark light oil price.

Pipeline pressure has pushed more crude onto trains ... [b]ut crude movement by rail is costly and prone to spills and sometimes disastrous accidents.

Enter CN's patented Canapux product, which is solidified crude encased in plastic, named to evoke the country's most popular sport, hockey. The railroad argues that solid crude, never before commercially shipped in the world, can be transported more cheaply, efficiently and with less environmental risk than liquid crude in tank cars. Since it floats, Canapux is easier to recover from a spill into a water body.

Canapux, a hockey puck. See photo below taken from twitter.

The reader who sent me this sent a great note. I will post without editing:

Just totally disregarding the unicorns that will magically manufacture the plastic casing and convert it to sparkling dew...

If they get this Canapux thing up and running, they can virtually eliminate transportation costs.  Every youth hockey league in Canada will construct and adopt a length of synthetic ice.  Each team will shoot the Pux down their assigned lanes on to the next team.  Sort of like a Pony Express.

They can have tournaments to see how quickly they can shoot from Ft. McMurray to Burnaby.  Then the pros can take over and shoot goals onto the ship.  Canada will have permanent possession of La Coupe Stanley.  (;>)

I love the Internet for this sort of stuff:

I found that clip while looking for Lamoreaux's famous shot.  Here it is at 2:20.  But it's fun to see all the shots and that only takes 3 minutes.

By the way, see if you can see the real "Miracle on Ice" in the first YouTube video linked above.

With regard to the second-linked YouTube video, the most fun, perhaps, is watching the post-success celebratory reaction by the skater and then by her team. Perhaps the best segment begins at 1:20.

By the way, the Canapux is now being picked up on twitter: 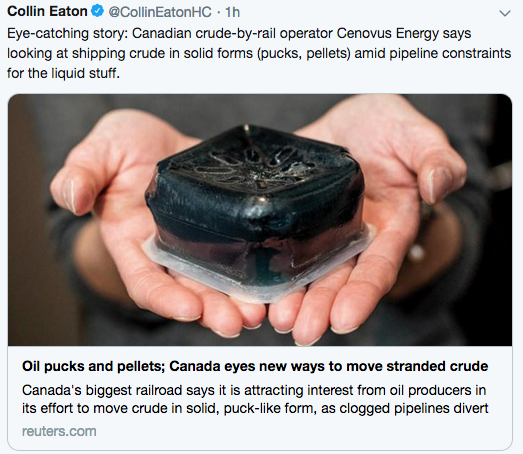 Christmas: and so it begins -- our local "98.7" plays only Christmas music between now and Christmas. I believe they start right after Halloween, on November 1, 2018, and go straight through, 24/7, with Christmas music. And when tired of that, switch over to our local "91.7" perhaps the best radio music station anywhere in the world. No advertising. 24/7. Eclectic.

Never let a crisis go to waste. Americans have lost interest, but behind the scenes a lot is happening. Canada's Trudeau first of western leaders to say his "intel folks" have listened to "the secret tape."

President Trump has "unprecedented" leverage over the Saudis.

Where we lived when assigned to Langley AFB, VA, years ago: 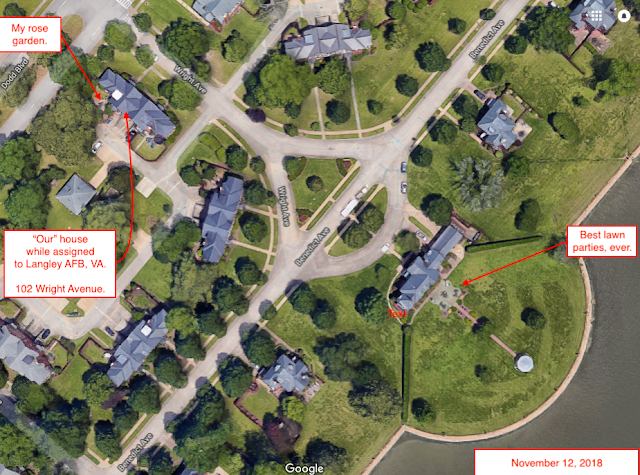 Where we lived when assigned to Incirlik Air Base, Turkey, years ago. We could see Mt Ararat out our back door (not quite, but very close): 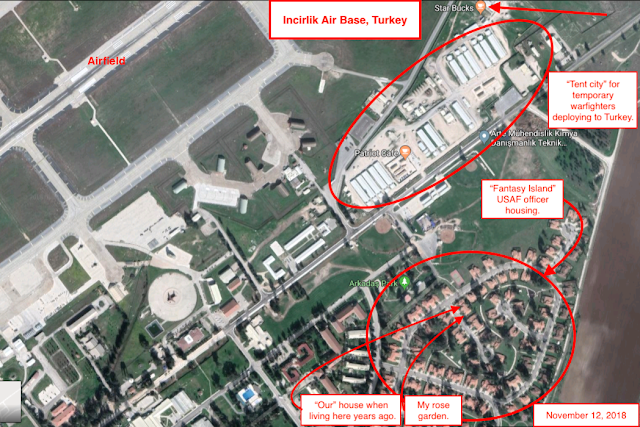 Much lower than normal? Switch to coal? How did this happen. Hasn't global warming been with us since 1994? From twitter: 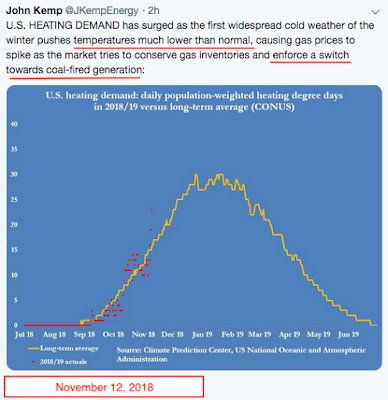 It turns out that this was "predicted" just a couple of months ago (actually this issue has been written about for quite some time) but this article spelled it out in very, very simple English. From spaceweatherarchive:

Sept. 27, 2018: The sun is entering one of the deepest Solar Minima of the Space Age. Sunspots have been absent for most of 2018, and the sun’s ultraviolet output has sharply dropped. New research shows that Earth’s upper atmosphere is responding.

“High above Earth’s surface, near the edge of space, our atmosphere is losing heat energy. If current trends continue, it could soon set a Space Age record for cold.”

Memories: when assigned to Langley AFB some years ago, I drove past NASA's Langley Research Center at least once almost every week.

Bjorn Lomborg is linked at the sidebar at the right.


There's one glaring omission in this op-ed. And that's the real reason this op-ed came out when it did.

The reason for the op-ed at this point in time: to take the wind out of "Beto's" sail. Obviously the writers are smart enough to know the "Beto" story. The fact that they did not even mention "Beto" speaks volumes [Sir Arthur Conan Doyle / Sherlock / The Hound of the Baskervilles].

I've always said that if something doesn't make sense, follow the money. In this case, it made no sense that the writers did not mention the extraordinary run by Beto O'Rourke. But it makes sense if one follows the money.

Where did $100 million in campaign money go in the 2018 midterm elections? To Beto O'Rourke, most coming from out of state, and probably most of that from California.

Hillary was unexpectedly upended by a charismatic young male a decade ago. Let's say for argument's sake, Hillary is serious about another campaign run. Wow, déjà vu all over again. Just when she thought she was the Democratic front-runner, out of nowhere comes another almost-junior-senator from Texas. She can't let this get out of hand.

That's the reason for the timing of this op-ed now. This is letting Democratic donors know that Hillary is still in the hunt and thoughts of donating to Beto are ill-placed.

If this op-ed had not been choreographed with Hillary's approval, the writers would have definitely examined the "Beto" factor. Hillary (and these writers) are hoping that by completely publicly ignoring "Beto" they can leave him dead in the water.

Beto is now everything Hillary is not.

A Hillary-Beto ticket? I wouldn't bet against it.

This is the problem with mainstream media. This headline "story" is seen by many to be an op-ed (or worse, a news story) by the Wall Street Journal. In fact, once you see who wrote it, it becomes a non-story but incredibly fun to parse.

The writers' thesis: Hillary is so egomaniacal she will run again.

The writers:  Mr. Penn was a pollster and senior adviser to Bill and Hillary Clinton from 1995-2008. Mr. Stein is a former Democratic Manhattan borough president and president of the New York City Council.

The Clintons are so powerful and vindictive, no one would pen an article like this, especially for a newspaper like the WSJ, without approval from the Clintons.

It comes out just as the Clintons begin a speaking tour.

Purpose of speaking tour:
Democrats had a pretty good 2018 mid-term election without any Clinton support.

It is released almost immediately after the mid-terms. The 2020 presidential campaign begins.

In fact, had she been on the campaign trail, the midterm results would have likely been much different.

Stamina? Hillary's retort: if FDR could do it from a wheelchair, I can do it.

There's one glaring omission in this op-ed. And that's the real reason this op-ed came out when it did. That omission will be posted later. It's always interesting to let folks think about it. I've told one reader in an e-mail what that omission is.

Again, the comments are almost as entertaining as the article. I read through about a hundred of them and almost all missed the glaring omission, also. I think only one person mentioned the glaring omission and that was after I posted my comment.
Posted by Bruce Oksol at 6:35 AM No comments: 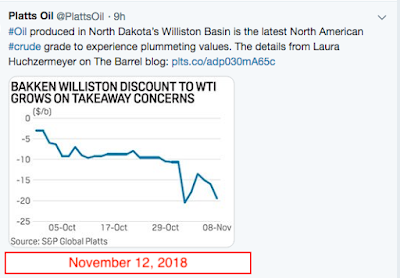 
The Energy Information Administration (EIA) estimates that natural gas gross production in the Rockies’ Niobrara region increased to a record 5.1 Bcf/d in September 2018, narrowly beating the previous high mark set almost seven years ago. And, with major, crude oil-focused producers in the Powder River Basin (PRB) and Denver-Julesburg Basin (D-J) planning for expanded crude output in 2019 and beyond, production of associated gas is expected to continue rising. All this growth — actual and anticipated — is spurring the development of new midstream capacity, especially gas processing plants, in both the PRB and the D-J Basin. So, what’s already in place, what’s being built and planned, and how soon will it need to come online? In today’s blog, we continue our review of Rockies crude oil, gas and NGL production, processing capacity and takeaway pipes, this time with a look at the gas side of things in the PRB.