North Dakota's State Mill And Elevator Doing Just Fine, Thank You -- May 22, 2016; This Really Is Amazing: CFA's Average Sales/Restaurant Is Best In The Business


With the North Dakota budget in rough shape, officials are glad for any boost to state coffers. That includes the modest bump from the North Dakota Mill and Elevator that towers over north Grand Forks.

The mill, the only such state-owned operation in the country, contributes millions every year to the North Dakota budget. The mill is financially self-sufficient.

The facility, located just north of Gateway Drive on Mill Road, is on the verge of completing a major expansion project that will make it the largest single milling operation the country. Taylor said demand for flour is largely driving the addition, which will increase its daily production capacity from 38,000 hundredweight of flour to 49,500 hundredweight.

The expansion, first approved by the North Dakota Industrial Commission in 2014, will add an eighth milling unit to the facility. It also includes enough room for another expansion in the future.

The mill is also planning a project that will include a new track and wheat unloading pit that may be completed this fall.

Business Insider has an interesting article: KFC vs Chick-Fil-A. This is the one line that caught my eye:


"They can make sure that procedures get followed. I think that's a competitive advantage for them. I don't know if it's an advantage I would want, but it's certainly working for them from a business standpoint."

They can make sure that procedures get followed. And the KFC CMO is not sure that's a business practice he would want to emulate. In a franchise! OMG! That's what a franchise is all about: consistency and predictability. No wonder KFC is having its problems.

I think that was the only time I have visited a KFC in the last ten years. Before that, my father-in-law enjoyed them and he would bring home KFC, but he passed away some years ago.

I was quite shocked to see how badly the KFC was in Williston with regard to appearance and cleanliness. That particular KFC was there well before the boom; located near the high school. But it was unkempt; it was no longer busy in the Bakken but no one was cleaning the tables and the floor looked atrocious. It had the feel of a KFC in downtown NYC -- not something I would expect in rural North Dakota.

On the other hand, the Chick-Fil-A here in Grapevine is incredibly busy when it is open (it is closed on Sundays) and it is as clean as any fast food restaurant that I've seen. And the customer service is incredible.


In 2014, Chick-fil-A's average sales per restaurant were $3.1 million, the greatest of any fast-food chain in the US. In comparison, KFC sold $960,000 per restaurant that year.

The reason for Chick-fil-A's dominance is a mix of excellent food and superior customer service, according to many analysts.

Most noticeable: the writer failed to note that CFA is closed on Sunday and yet CFA still "cleans FKC's clock," as they say.

One of the things I enjoy most during a move is to see how smoothly our mailing address changes work out.

This time, as usual, very, very well. We've had lot so of practice, moving on average every 2.6 years while serving with the USAF. In retirement, it has been much less often, maybe four times since 2007. Let's see 8 years divided by 4 = 2 years; well, maybe not. Whatever.

The only problem we've had this time, it appears, is with one monthly periodical, The Atlantic [Monthly]. I'll call them again tomorrow. It really doesn't bother me. I'm not sure whether I will continue with the periodical. I used to enjoy it to some degree, but it has changed a lot, and I'm not sure if I enjoy it all that much. It's become indistinguishable from a number of other periodicals over the past few years it appears.

Having said that, some nice bit of trivia that popped up in this month's issue (June).  I'm not going to go into it now (except to say it was Brenda James who introduced me to the origin of the word "ghetto") but it seems there have been a lot of articles talking about ghettos lately.

In "The Eviction Curse," Patrick Sharkey, writes about the origin of the ghetto:


For Duneier, two historical iterations s of the Jewish ghetto in Europe serve as structural extremes to frame the story he traces of a disadvantaged group -- African Americans -- cordoned off in the US.

At one end lies the enclave that gave us the term ghetto: an island in Venice (named for the copper foundry, or geto, once located on it) where Jews were assigned to live in 1516. Gates opened in the morning and closed at night allowing the Jews to circulate among the general population and take part in economic life by day. Venetian authorities mostly kept out, which meant Jewish community and culture could thrive.

William Shakespeare had never seen the Venetian ghetto but he describes it in exceedingly good detail. He was truly a genius. He kind of reminds me of John "I've served in Vietnam" Kerry or Hillary Clinton.

Wow, there are so many other story lines there, but time to move.

Meanwhile some additional trivia that might be useful at this week's cocktail party. Or not.

I've grown tired of the Brontës; it's hard to believe I actually wrote that. Whatever.

But this in Judith Shulevitz's "The Brontës' Secret":


I see no reason not to consider the Brontë cult a religion. What are Peoples of the Book, after all, if not irrepressible embroiderers of fetishized texts?

The Jews have a word for the feverish imaginings that run like bright threads through their Torah commentaries: midrash, the spinning of gloriously weird backstories or fairy tales prompted by gaps or contradictions in the narratives.

So, there you have it; a bit more on the origin of the words ghetto and midrash. That and $2.00 will get you a cup of coffee in Starbucks.
Posted by Bruce Oksol at 6:51 PM No comments: 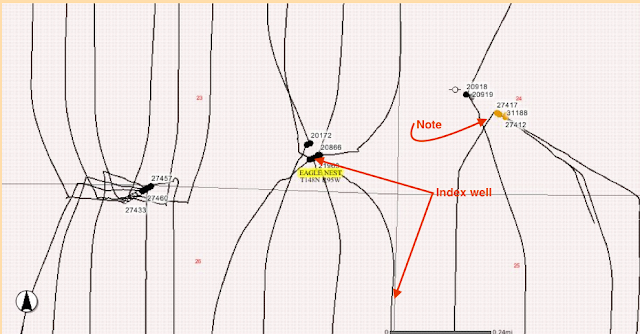 Later, 7:01 p.m. Central Time: shortly after posting the note below, a reader, thank you very much, took the time to send photographs of the Newfield wells mentioned below. Specifically, these are photographs of what I referred to as Pad C in this particular posting. 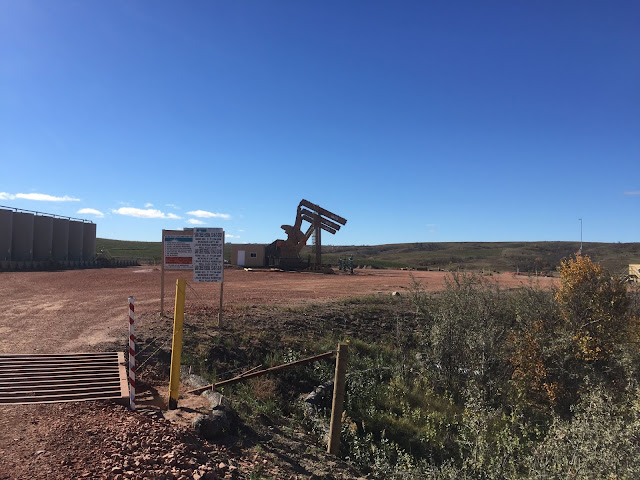 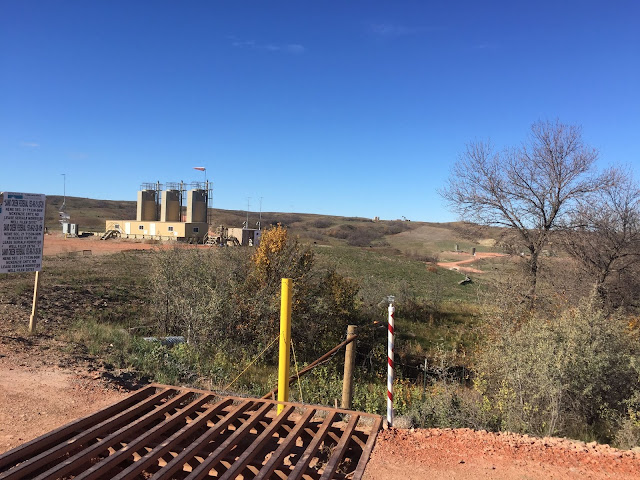 The cattle guards are a story in themselves (posted many years ago). Isn't the scenery beautiful? A huge thanks to the reader for sending me these photos.


Original Post
An update of four neighboring Newfield multi-well pads in Sand Creek oil field. Three of the pads are 3-wells pads; one well is a 4-well pad.


It was also true of the other two wells on this pad, a huge jump in production in July, 2015.

It should be noted that these four Newfield pads will soon have a new neighbor. One section to the east, in section 15-153-96, XTO has another 4-well pad:


As is the case with most of his policy stands, Donald Trump has spoken only generally about how he thinks Washington should treat energy production in the U.S., expressing strong support for the oil, natural gas and coal industries, and promising to cut funding for what he sees as excessive regulation.

But this week in North Dakota, the presumptive Republican nominee for president may reveal more about his views on promoting domestic energy, and perhaps take another shot at Saudi Arabia, the leader of the Organization of the Petroleum Exporting Countries.

Trump is scheduled to deliver a keynote address Thursday at the Williston Basin Petroleum Conference in Bismarck to an audience of oil and gas operators whose drilling in the Bakken shale formation has made North Dakota the second-leading oil-producing state in the U.S.


Out-of-control wildfires that have consumed over a million acres of land in Canada's Alberta are costing oil companies as much as $50 million a day in lost production.

Alberta's oil producers curtailed production by May 5 as fires prompted the evacuation of Fort McMurray, a central production hub. By May 9, more than 1 million barrels of daily oil output had been halted.

Ivanpah Feels The Burn -- May 22, 2016: Question: If Your Power Plant Is One-Third Solar, Two-Thirds Natural Gas, Are You Still A Solar Plant? Sort Of Like Starbucks Milk Drinks With A Bit Of Coffee Added

Later, 1:19 p.m. Central Time: this could be the tipping point requiring the Ivanpah file for "cap and trade" status -- performing at only 1/3rd capacity and back up required by natural gas, certainly we're at that stay now. Like forbearance agreements, however, "cap and trade" may be confidential issues for the solar plant. See first comment. The Ivanpah "cap and trade" issue was mentioned at this post back in November, 2015.


Original Post
I've blogged often about the solar science project at Ivanpah in California. This link was sent to me by a reader, thank you: world's largest solar power plant catches fire due to own mirrors less than a year After torching hudreds of birds. Inquisitr is reporting:


On Thursday, the Ivanpah Solar Electric Generating System, which is the world’s largest solar thermal power station, reported that a small fire had broken out at the facility. The fire caused the plant to shut down one of its electricity-generating water towers and left the high-tech facility crippled, only operating at one-third capacity.

Officials from the plant are now saying that the blame for the fire can be placed on misaligned mirrors.

The $2.2 billion station is operated by a consortium, which includes BrightSource Energy, NRG Energy, and Google, and has taxpayer-guaranteed loans valued at over $1.6 billion. The three 459-foot water towers are the focus of over 350,000 computer controlled mirrors – as “big as garage doors” – reflecting sunlight onto them.

This concentrated solar exposure creates a tremendous amount of heat, which in turn creates the steam which is necessary to turns the turbines in order to produce electricity. The plant in California, which is the largest of its kind in the world, features a gross capacity of 392 megawatts, enough power to give energy to about 140,000 homes.

It's not a parody or a joke, although I wondered at first. Popular Science also has the story, calling it a "small inferno."

I read the LA Times headlines everyday online but I never saw the headline until googling it now, but the LA Times did report it saying that only one of three towers is currently operating, with the fire shutting down one and another undergoing maintenance.

I track the Ivanpah links here.
Posted by Bruce Oksol at 11:51 AM No comments:

The other day we were talking about EOG, Packers Plus Energy Services, open hole fracks, etc.

This well has come up occasionally on the blog, and from an earlier post:


As noted it was shut down back in late 2015; now the sundry forms are available -- there was a "stuffing box leak." Looks like it was repaired, and everything back to normal.

The area under discussion and location of the index well, #16532: 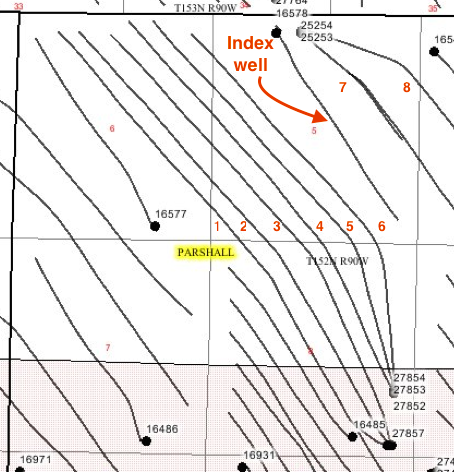