A federal appeals court has put a hold on a judge's order to halt the DAPL, but The Bismarck Tribune assures us that this is only temporary. 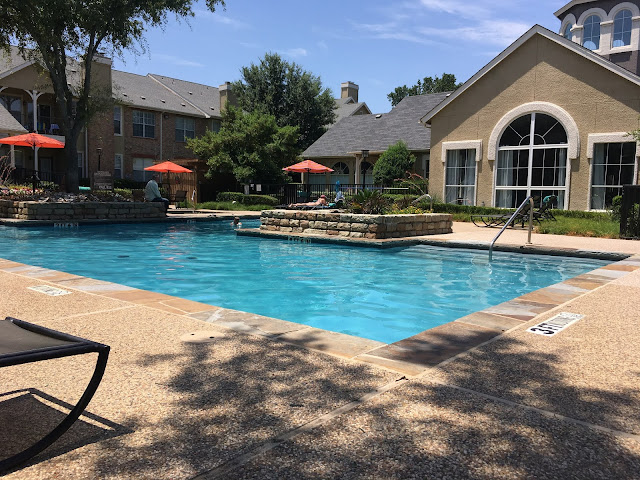 Speaking of which I'm starting to get a feeling that some important policy makers have had enough of Covid-19 and are ready to move on. And perhaps not.

Republican Tommy Tuberville defeated Jeff Sessions in a Senate primary runoff as the former lawmaker tried to reclaim is old seat. President Trump supported the former. Tuberville will take on Doug Jones, the most vulnerable Senate Democrat running this year according to some. I wouldn't know.
Posted by Bruce Oksol at 8:31 PM No comments:


Four new permits, #37713 - #37716, inclusive:
Twenty-three permits renewed (the seven consecutive business day in which 20 or more permits were renewed):
The new permits:
The CLR Morris / Carson Peak wells are tracked here. In section 26, Carson Peak wells run north; Morris wells runs south. This is a very strange location as far as I can tell. -- they are on confidential so I don't know anything more about them.

A very strange day, to say the least. I would have liked to have seen the Dow just before "stocks dropped." 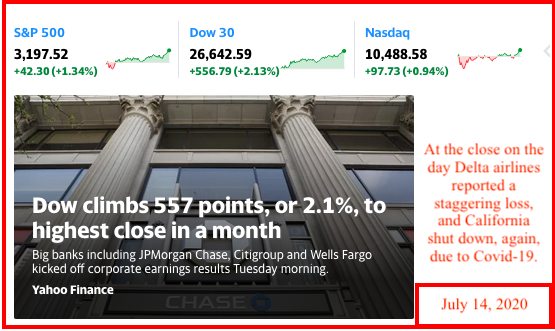 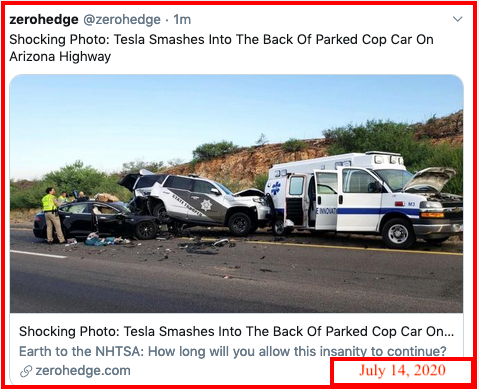 Autonomous vehicles: a solution looking for a problem.
Posted by Bruce Oksol at 3:43 PM No comments:


The number of drilled wells globally is expected to reach around 55,350 this year, said Rystad Energy, the lowest level since at least the beginning of the century as oil and gas activity, including the drilling market both in terms of wells drilled and related demand for drilling equipment, has been stymied by the COVID-19 pandemic.

The decline is a staggering 23% fall from 2019’s number of 71,946 wells. Rystad Energy’s forecast, which extends to 2025, does not expect last year’s number to be met or exceeded within the considered timeframe.

Drilled wells are expected to partly recover to just above 61,000 in 2021, as governments ease travel restrictions, boosting oil demand and prices. Then numbers will rise further to just above 65,000 in 2022 and remain just below 69,000 until the end of 2025.

North America is likely to be most affected, with the country’s rig count already down to historic lows just a few months into the downturn. Although modest recovery is possible in second-half 2020, drilling activity will remain more than 50% below the levels seen at the same time last year. 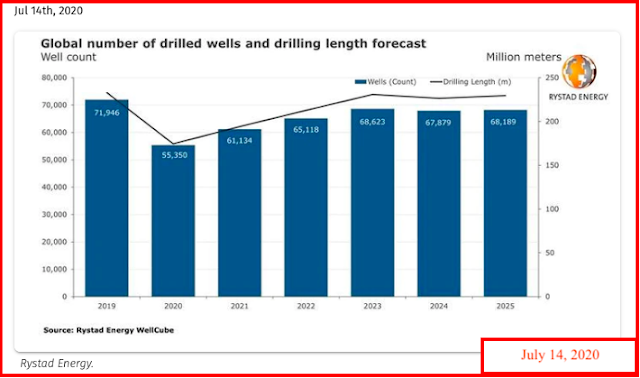 It should be remembered that Saudi was feeling the "heat" well before Covid-19 became a thing. Saudi Arabia announced their attempt to "break" shale just before Covid-19 destroyed demand.

Like "types" of oil (heavy, light, sweet, sour), wells are not created equally (off-shore, on-shore, conventional, tight, vertical, horizontal). Nor can we compare production from wells drilled by rigs with 1981 technology with rigs being used in 2021. And so much more. We need better metrics.
Posted by Bruce Oksol at 1:16 PM No comments:

"A new consensus has emerged in the press, but perhaps especially at this paper: that truth isn’t a process of collective discovery, but an orthodoxy already known to an enlightened few whose job is to inform everyone else." - Bari Weiss in resignation letter from NYT.

Later, 10:44 a.m. CDT: this market is crazy --
Later, 10:42 a.m. CDT: Philadelphia to ban all major public events through February, 2021. I assume that means no political rallies or on-site voting. Demonstrations and political protests will not be affected.

Later, 10:39 a.m. CDT: forecast -- 2Q20 earnings --
Later, 9:30 a.m. CDT: think about this -- this is absolutely incredible -- it will be re-posted as a stand-alone -- the graphic is amazing -- something is happening here and I don't know what it is, but it is being reported that Chinese crude imports soared to a record 13 million bopd in June vs 11 million bopd in May, and 10 million bopd one year earlier, June, 2019 (numbers rounded). 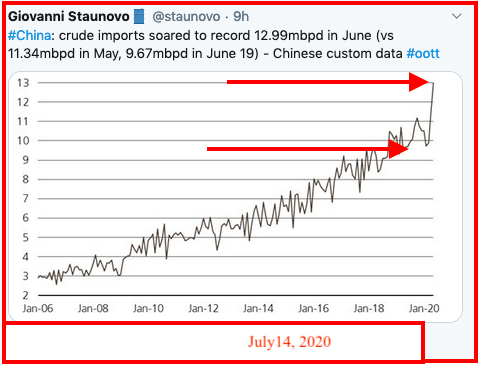 To a great extent, this was China simply stockpiling huge amounts of oil at very, very cheap prices, but nonetheless, the numbers were staggering. It will be interesting to see what the rest of the year brings.

Later, 9:05 a.m. CDT: absolutely impossible to "call" this market or to make sense of it:

I talked about this in relation to Warren Buffett / Berkshire Hathaway just a few days ago:


Wells Fargo swings to $2.4 billion loss and slashes dividend by a wider-than-expected margin as the coronavirus pandemic continued to slam the bank's earnings and profit outlook. Dividend to be cut from 51 cents/share to 10 cents/share.

The San Francisco-based bank reported a net loss of $2.4 billion, or 66 cents a share, for the second quarter, vs. income of $6.2 billion, or $1.30 a share, in the comparable year-earlier quarter. Analysts polled by FactSet had been looking for a loss of 16 cents a share. Link here.

Unrelated but important for the archives. Daniel Lewis Lee. US Supreme Court did not stop.

With that subject heading, I may be my own nominee for the 2020 Geico Rock Award. LOL.

It's not that we didn't see it coming, it's the "words" now being used to describe the economic impact.
From Yahoo!Finance:

Here were the main results from the report:
With worldwide travel demand crushed by the coronavirus pandemic, Delta CEO Ed Bastian said in a statement that the quarter’s results “illustrates the truly staggering impact of the COVID-19 pandemic on our business.”

Over the last year, the company lost over $11 billion in revenue, but raised nearly $15 billion in financing ...

Delta says it had $15.7 billion in liquidity at the end of Q2, with an option to borrow an additional $4.6 billion from U.S. taxpayers.

However, the air carrier posted total adjusted revenue of $1.2 billion, representing a staggering 91% dive from the comparable year-ago period, as Delta was forced to shave capacity by 85%.

Even still, the company intends to join other air carriers by spending more on anti-coronavirus cleaning protocols.

The airline cut its total operating expenses by $5.5 billion during the quarter, as more than 40,000 employees took voluntary leaves of absence protected by the CARES act deal.

Delta also parked more than 700 aircraft, which helped it cut its average daily cash burn from $100 million to $43 million. In June it fell to $27 million.

A reader sent me this note, source:

The first half of this year saw investment decisions made on 28 sea-based wind farms, including the largest ever, the 1.5 GW Vattenfall Hollandse Zuid array off the coast of the Netherlands, costing an estimated $3.9 billion.

Other major offshore deals included the 1.1 GW SSE Seagreen project off the U.K., at an estimated $3.8 billion; the 600 MW CIP Changfang Xidao array off Taiwan, at an estimated $3.6 billion; and the Fecamp and Saint-Brieuc projects in French waters, together totaling 993 MW and $5.4 billion. There were no fewer than 17 Chinese installations financed, led by the Guangdong Yudean Yangjiang Yangxi Shapaat 600 MW and $1.8 billion.


That is very, very interesting. There are some strange things going on. The global economy seems to be in a mess and yet there seems to be no limitations on amount of money spent for expensive wind. And then all of the interest in electric trucks recently, and TSLA shares blowing through $1700/share and the company now valued more than eight other major auto manufacturers combined.

Just before receiving that note I posted:


The bans are coming: no links. Google it. More and more jurisdictions are putting in place laws to restrict the sale of ICEs (gasoline/diesel vechicles) or ban them altogether. One example: Scotland, 2032. The grid can't possibly handle the load, but that's only one of many challenges. This will be fascinating to watch.

And, then, of course, the move to shut down existing crude oil and natural gas pipelines in the US.

As noted the other day:

As someone once wrote:


There's something happening here
What it is ain't exactly clear

The next two lines of the song are prescient:

Supposedly written in response to a street demonstration in Hollywood, 1966.

Quick: what's the name of that song?

By the way, as long as we're here, Jamie Dimon's JPMorgan "beats on earnings." Wow.  JPM could open right around $100 this morning.


The economies in the Gulf alone are set to experience a combined contraction of 7.6 percent this year because of the oil price crash, a senior IMF official forecast earlier this month.

This is a sharp downward revision from an earlier forecast by the international lender, which saw the Gulf economies—the six states that make up the Gulf Cooperation Council—experiencing negative growth of 2.7 percent. "

The oil sector will shrink sharply by around 7.0 percent and it will be accompanied by a drop in the non-oil sector also," said Jihad Azour, director of the Middle East and Central Asia department of the International Monetary Fund said at a webinar this week.

The bans are coming: no links. Google it. More and more jurisdictions are putting in place laws to restrict the sale of ICEs (gasoline/diesel vechicles) or ban them altogether. One example: Scotland, 2032. The grid can't possibly handle the load, but that's only one of many challenges. This will be fascinating to watch.


Only one well coming off the confidential list today -- Tuesday, July 14, 2020: 44 for the month; 44 for the quarter, 490 for the year:
RBN Energy: Cheniere's midship shuffles gas flows east from SCOOP/STACK plays, part 2. Archived.


In the nearly three months since it began initial service, natural gas flows on Cheniere Energy’s Midship Pipeline out of the SCOOP/STACK have ramped up, and now consistently top 700 MMcf/d. This, despite production from the Oklahoma basins declining by close to 10% in that time. In other words, Midship is doing what it was supposed to do — namely, giving producers and shippers incremental capacity to reach relatively more attractively priced markets.

However, the pipeline was also meant to connect that supply region with growing LNG export demand on the Gulf Coast, which has been slashed in recent months as global oversupply and poor economics have marginalized U.S. LNG cargoes. That raises the question, where are Midship flows heading? Today, we provide an update on Midship gas flows.