Jobless claims jump far more than expected:
Clintonesque: one has to admit, it's pretty remarkable to get Democrats defending the MS-13 gang.  This series of tweets reminded me of that story: 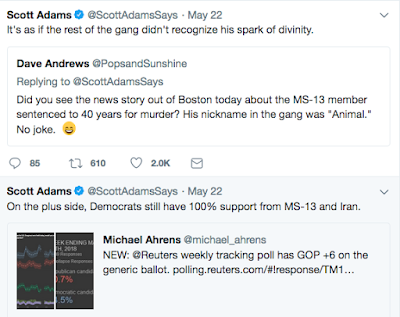 Cars. I'm traveling. When possible, I rent from Enterprise. About two years ago a new "neighborhood" Enterprise went up in our neighborhood -- it's on my bicycle route. Four rentals ago, it was a Ford cross-over; it was okay, but not great. Three rentals ago, it was a Nissan Rogue; awesome; if I was in the market for a new crossover SUV, I would consider a Rogue .Two rentals ago, it was a compact, but I actually forget what it was, but similar to a Honda Civic, I suppose. This time, a Chevy Sonic. I love it. This is definitely something I would consider as a replacement for my Honda Civic. My problem: I've grown to trust the quality of Honda so much I doubt I could ever switch. Interestingly enough, this 2018 (2019?) Sonic appears to get worse highway mileage (about 33 mpg) than my 2012 Honda Civic (which I bought in 2011), which gets about 40 mpg. I have to admit, I generally drive a rental faster than I drive my Honda civic.

Sirius: I never thought I would see the day that I actually said I listened to Sirius XM Radio, much less say I really enjoyed it. With the Enterprise rental, I get Sirius XM Radio for free. Quite incredible. I can listen to CNBC (112) and then alternate with best music from the 50s, 60s, and 70s (#5, #6, and #7, respectively. I had some incredibly long stretches of driving in some very, very remote areas and was quite thankful for Sirius. I never thought I would say that. But, having said that, Sirius XMR has "its place" and I don't need it for local driving.

Odometers: I cannot remember ever trading a car in for a new car. I generally drive a car to the end. The first car I ever had, a '73 Chevy Nova SS, I gave away when the US Air Force transferred me to Germany. My dad bought me the car in 1973, and we were transferred to Germany in 1983. The two Saabs that we had overseas were also pretty much given away before we came back to the US after 13 years being overseas. One was left in Turkey; one was sold to another airman in Belgium when we left Europe. The highest odometer reading: 198,000 miles on a Chrysler minivan before I donated it to charity (and, no, I never took any tax write-off) -- the transmission finally gave out. So, I thought I was doing pretty good. Then a DJ on Sirius XMR said he had put on 450,000 miles on his car -- never mentioned the make/model. Now I have a new goal for my Honda Civic. So, we'll see.

Tesla: Musk says he can drop the price of one of his cars (I forget which) by $14,000 if China cuts its tariffs. This just shows how onerous the Chinese auto tariffs are. Chinese auto tariffs? 25%. But I believe I recall reading that Denmark's tariff is 100%. US automobile tariffs: 2.5%. Yes, the decimal is in the correct spot.

Separate but equal: Starbucks homeless shelters. In response to a comment, Scott Adams weighed in on Starbucks and their "new" bathroom policy. Scott Adams predicts that Starbucks will eventually place stand-along bathrooms for public use adjacent to, but separate and detached from the Starbucks cafe itself. Starbucks would only need to do this in certain locations. Some have argued that Starbucks will shutter many of its cafes that have bathrooms. Scott Adams disagrees: he thinks there will be more bathrooms -- separate but equal -- rather than fewer bathrooms.  I disagree. Obviously Scott Adams is much smarter than I and he is most likely correct, and I will be proved wrong, but its clear that Starbucks customers are moving to drive-through; app ordering and pick-up; Uber/Lyft/Dash delivery; and, that sit-down in the cafe is minimal. In a problematic area in east Portland (near the Portland/Gresham city line), there is a Starbucks that has no inside seating. So, we'll see.

Feinstein: I see she is running for re-election for another full six-year US Senate term. She is 84 years old. Rumors are she is running to set herself up for running for California governor at age 90, and then US President at 94. She will probably face off against Hillary in the 2028 Democratic primary for president. That's really not that far away, 2028, is it?

China. I'm in a remote, undisclosed location which I will talk about at a later date. I'm in a very nice hotel, paid for by another, and something to which I am not accustomed. When traveling cross-country, I generally sleep in the car or in $49/night roadside motels that have not been renovated since Lucille Ball last stayed there. Coming down to the lobby yesterday afternoon, three people, whom I assume were Chinese -- I don't want to be accused of profiling, but a) they were speaking Chinese; and, b) they appeared not to be Scandinavian. I was actually carrying my very, very used copy of 1421: The Year China Discovered America, by Gavin Menzies. I showed them the book I was reading, and, now that I know a limited amount of Chinese geography, I asked if they were from Hong Kong, Canton, Nanking, or Beijing (it was obvious they were not from Macao). The "leader" of the three replied, "Yes." And we moved on. This morning, the petite (and I hope that's not being sexist) and quite attractive (and, yes, I suppose that is sexist) woman of the group came down for coffee. I don't know if the Chinese discovered America or not in 1421, but it appears the three have discovered Sturgis, SD. She was wearing a Harley-Davidson leather jacket. I assume she was "corporate" -- I would have joined her for breakfast but I did not want to be seen as being too forward. As I'm writing this, the Chinese gentleman who said he was from "Hong Kong, Canton, Nanking, and Beijing" has just walked in. Very distinguished gentleman in a yuppie sort of way. I can't imagine him on a hog (or is it "Hog"), but I also never imagined running into "him" here in this remote location.

Stock market: I love this market. I would write more but not in the mood.

WTI: fascinating to say the least. It's down again today, now trading below $71. I assume we will start seeing articles with these headlines:

Permian: there are no less than three "big" articles on the Permian and shortage of takeaway capacity. First, RBN Energy has been talking about this for at least the past year. Now, today, there is a long article over at SeekingAlpha today; and finally, the banner, headline story over at oilprice.com today is "Permian growth is reaching its limit." We saw this at the height of the Bakken boom.


RBN Energy: a drill down report on the US-vs-Canada battle for gas market share.


With natural gas production growth outpacing gas-demand growth in both the U.S. and Canada, gas producers in both countries are engaged in an increasingly fierce and costly fight for market share.

But now, supply congestion on both sides of the U.S.-Canada border is worsening in every border region, to the point where options to maneuver into alternative markets are shrinking.

This is war, folks — competition for U.S. gas market share between Canadian and U.S. producers is about to get much stiffer and the price discounts much deeper — deep enough to eventually price some production basins out of the market. Today, we discuss highlights from RBN’s new Drill Down Report on the subject.

Combined Lower-48 U.S. and Canadian natural gas production has increased to a staggering 96 Bcf/d, but gas demand within the two countries has not kept up. On the Canadian side, there is a growing imbalance between supply and demand in Alberta (where 80% of Canada’s natural gas is produced), which is exacerbated by the constraints for gas moving from the supply area to intra-provincial destination markets, namely the oil sands demand area in eastern Alberta. Gas production has been climbing for the better part of this decade, and just last November (2017) it breached the 16 Bcf/d mark, returning to the highest level since 2008, after it had dropped back to less than 14 Bcf/d in 2012.

The biggest factor driving oversupply conditions in North America is what’s happening south of the border in the U.S. Since January 2017, Lower-48 gas production has catapulted from about 70 Bcf/d — which marked the nadir since the oil-price crash in the second half of 2014 — to nearly 80 Bcf/d currently, an astounding 14% jump in the span of less than 18 months.

It will come as no surprise that the bulk of that increase came from the Marcellus/Utica shale region in Pennsylvania, Ohio and West Virginia. Unlike the first wave of Marcellus/Utica supply growth earlier this decade, though, most of the incremental gas this time around is moving well past the boundaries of Northeast states to other U.S. regions and even Canada, effectively “stealing” market share from other supply basins. East-to-west pipeline expansions from Ohio, like the reversal of Tallgrass Energy’s Rockies Express (REX) Pipeline Zone 3 segments and Energy Transfer Partners’ new Rover Pipeline, are opening the floodgates for Marcellus/Utica gas to increasingly permeate the Midwest and Gulf Coast, where it is running head on into supplies from other growing producing regions, as well as from Canada.

Posted by Bruce Oksol at 6:36 AM No comments: