In addition to all the other disclaimers, this has turned into a very long post; there are likely to be typographical and factual errors. I will correct them as I find them. This is for my benefit only. Feel free to read it but do not quote me on anything. I have not proofread this post.

It took awhile but finally there is some good news. A long, long time ago a reader asked when "they" would start drilling in a certain location. The following is a "cut and paste" from another post, as is, with the question, the original follow-up, and the update all together:

Well file #17077; when will they start drilling more wells in this section? October 24, 2013; they are doing a lot of drilling in Alkali Creek, but no other drilling in this section where 17077 is sited -- May 10, 2014. Still no new drilling in this section -- 5/8-154-94 -- as of October 24, 2014. [Update, January 16, 2016: I noted that there are four wells in this area -- these are 4-section spacing -- section 4/5/8/9 - 154-94:
In addition there are four more wells on/near the same pad, all still confidential:
See first comment below: it looks like there are four more wells that will also be drilling into these sections but in a slightly different 2560-acre (4-section) spacing unit. These wells are still on confidential list but based on their name, all of them are sited in section 07. Three of the horizontals will "end" in section 5, and one horizontal will "end" in section 6. When I look at the NDIC GIS map server it looks like the overlapping 2560-acre spacing unit for these four wells will be sections 5/6/7/8-154-94, and thus "draining" the same 1280-acre unit that has the "index" well, #17077, which started this whole conversation. Again, these four wells are all confidential but my hunch is they are 2560-acre wells, in overlapping 5/6/7/8-154-94:
Again, I type this stuff quickly and there may be typographical and factual errors. If this is important to you, go to the source.

A big "thank you" to the reader for noting the additional wells that impact this area. This has turned into a great "learning case" for me. See below.

This is a nice "learning case" for me. Most of what follows is a "guess." Do not assume this is all accurate. There's a lot of "stuff" here but it helps me to understand the Bakken.

The first graphic is of the general area that we are talking about. This area is just north of the river and east of Williston. The well with file #17077, which I call the "index well" for this post, started this entire discussion. 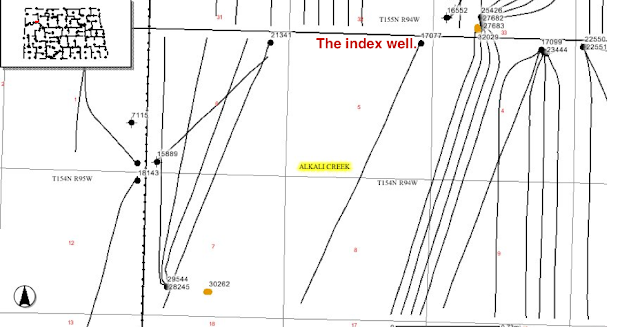 The second graphic is of the 4-well pad just to the east (and slightly north of the index well. In addition, there is a 4-well pad that has been completed. Although one can't see it in this graphic, the horizontals from the completed 4-well pad run to the south-southwest, which one will see in a graphic below. The "green arrow" is a guess: I think, based on the legal names of these wells still on the confidential list, that this is the direction the horizontals will take from this pad: 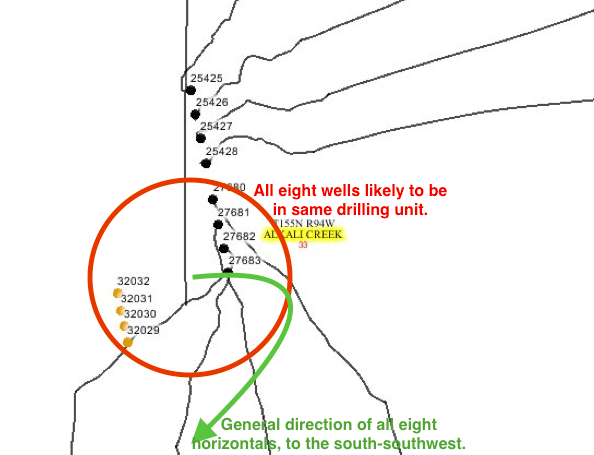 The third graphic is really, really busy. Start with the index well, #17077, at the top center. This well is on 1280-acre spacing. Immediately to the right, to the east is the 4-well completed pad and the 4-well pad still on the confidential list, seen in the second graphic above. The general direction of the four horizontals, shown in green, will likely be in this direction. Again, I could be wrong.

Then, in the lower left-hand corner is another 4-well pad, all wells still confidential, that a reader pointed out to me, that I had missed. Again, but this time in red, I've shown the likely direction the horizontals from these wells will take. 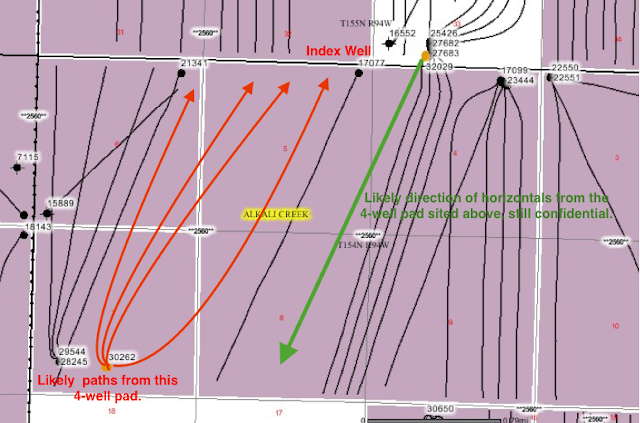 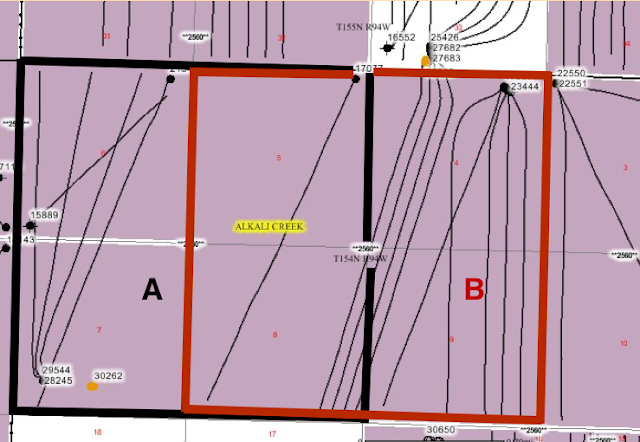 About six years ago, after having following the Bakken for two years, I told folks if "they had one well," they were definitely going to have four wells, probably eight wells, and possibly 16 wells. That has come true. But it's likely folks who have one well will eventually have 32 wells or more.

Again, so much of the above could be wrong. If this is important to you, go to the source. Do not use this post or any of the blog to make financial, investment, or travel decisions.

Posted by Bruce Oksol at 3:19 PM No comments:

This is pretty cool. This was the top story at Rigzone yesterday, and the headline: North Dakota Oil Output Defies Calls For A Decline:


North Dakota's oil production once again defied expectations for a decline in November, even seeing a slight uptick for the second consecutive month, as unusually warm weather helped offset the deepening decline in fracking activity.

Production in the second-largest U.S. oil producing state rose by 5,000 barrels per day (bpd) to 1.18 million barrels, monthly data from the Department of Mineral Resources showed.

Last month, it also rose 5,000 bpd. Output in North Dakota's Bakken shale fields has generally outpaced expectations even as oil prices have plunged to about $30 a barrel this week from over $100 in mid-2014.

Despite repeated forecasts for a decline, even from the U.S. government itself, output has remained surprisingly resilient. Last October, the U.S. Energy Information Administration forecast that Bakken output would slide by 23,000 bpd to 1.16 million bpd.

"Looking at the weather, we had relatively few days where there was too much wind and (there was) no precipitation in November. It was a very dry month, and it was not a cold month," Lynn Helms, director of the state's Department of Mineral Resources, told reporters on a conference call on Friday.

Ah, yes, global warming: nice weather explains the production curve in North Dakota. Lynn Helms is the perfect commissioner for North Dakota: quiet, unassuming, taciturn, reserved. He easily could have pointed out that the real reasons North Dakota has maintained its production (so far) is due to some of the following factors:
We're not hearing much from Peak Oil folks any more. By the way, I was firmly in that group of "Peak Oil" folks prior to the Bakken.

Wow, talk about a miserable week for the oil and gas industry. North Dakota hit a new post-boom record for the number of active rigs -- now down to 49. In addition, I don't know if folks saw this, Bakken oil is now priced at $20/bbl. But this was most incredible: the Red Queen is still pedaling -- despite active rigs at an all-time post-boom low, completions plummeting, permitting hitting new lows, the amount of crude oil produced by North Dakota actually increased month-over-month.

CBR
BNSF trains in Willmar, MN, could be traveling in both directions

Crude oil exports
Several links to national stories
Posted by Bruce Oksol at 8:28 AM No comments: