A few miles north of Alexander

What this guy learned about the Apple Watch after three days.
Posted by Bruce Oksol at 11:52 AM No comments:

New Balance Of Power In The Oil Industry, Cowboyistan -- New York Times; The JV Team Is A Bigger Threat Than Iran, Russia -- US Poll -- April 26, 2015

Perhaps the best story this week, sent to me by a reader earlier this week. New balance of power in the oil industry -- The New York Times:


For the better part of the last century, crude oil prices have swung like a pendulum, pushing and pulling the fortunes of nations. More often than not, global supplies of the volatile commodity were controlled by the rulers of desert domains who would otherwise have been powerless had it not been for the oil that bubbled beneath their thrones.

That pendulum is on the move again, sending the price of oil cascading to less than $45 this winter from more than $100 a barrel last June, and it may fall further in the months ahead.

On the surface, this latest oil boom gone bust may feel like history repeating itself, but there is a vital difference this time: The center of the oil world has spun from the sands of Saudi Arabia to the shale oil fields of Texas and North Dakota, a giant new oil patch some wildcatters have begun to call “Cowboyistan.

”Put another way, the United States is overtaking the Organization of the Petroleum Exporting Countries as the vital global swing producer that determines prices. That remarkable change has been building since 2008, as American shale fields accounted for roughly half of the world’s oil production growth while American petroleum output nearly doubled.

And shale production methods have proven highly adaptable to market conditions. Not coincidentally, nearly all the advantages of the price swing are moving in Washington’s direction.

Most American consumers and industries have benefited from a sharp drop in gasoline prices and other energy costs. And abroad, the economies of oil-producing adversaries like Russia and Venezuela are reeling.

Rene G. Ortiz, a former Ecuadorean oil minister who also once served as OPEC’s secretary general, noted that as recently as late 2008 and 2009, the last time oil prices slumped, OPEC cut oil production by four million barrels a day to support prices, and the move stabilized the market in a relatively short time.

“Why doesn’t Saudi Arabia think that couldn’t work again today?” Mr. Ortiz asked. “Because of the soaring U.S. production. Today’s OPEC is thinking about market fundamentals rather than manipulating the market because it doesn’t have the same power it once had.”

Last Nov. 27 was a turning point for OPEC at its meeting in Vienna. It was a turbulent session, though behind closed doors, where the firebrand oil ministers of Venezuela and Iran faced off with the dour Saudis and their Persian Gulf allies. The Venezuelans and Iranians, backed by Algeria, Nigeria and a few other countries that need every cent they can get from their oil exports, argued that OPEC should slash production to strengthen prices exactly as the cartel did when the crude price tumbled during the Asian financial crisis in the late 1990s, and again after the tech bubble popped in the early 2000s, and finally as it did again just six years ago.


Americans see ISIS as a bigger threat to the United States than Iran, Russia, North Korea or China, according to a new CNN/ORC poll. Overall, 68% say ISIS is a very serious threat, compared with just 39% who say so about Iran, 32% about North Korea, 25% on Russia and 18% on China. Nearly 9 in 10 see ISIS as at least a moderately serious threat.

The president sees ISIS as a minor threat that we could take out any time we want. The fathomless ignorance of President Obama -- the WSJ.

Our youngest granddaughter learning the finer points of soccer: 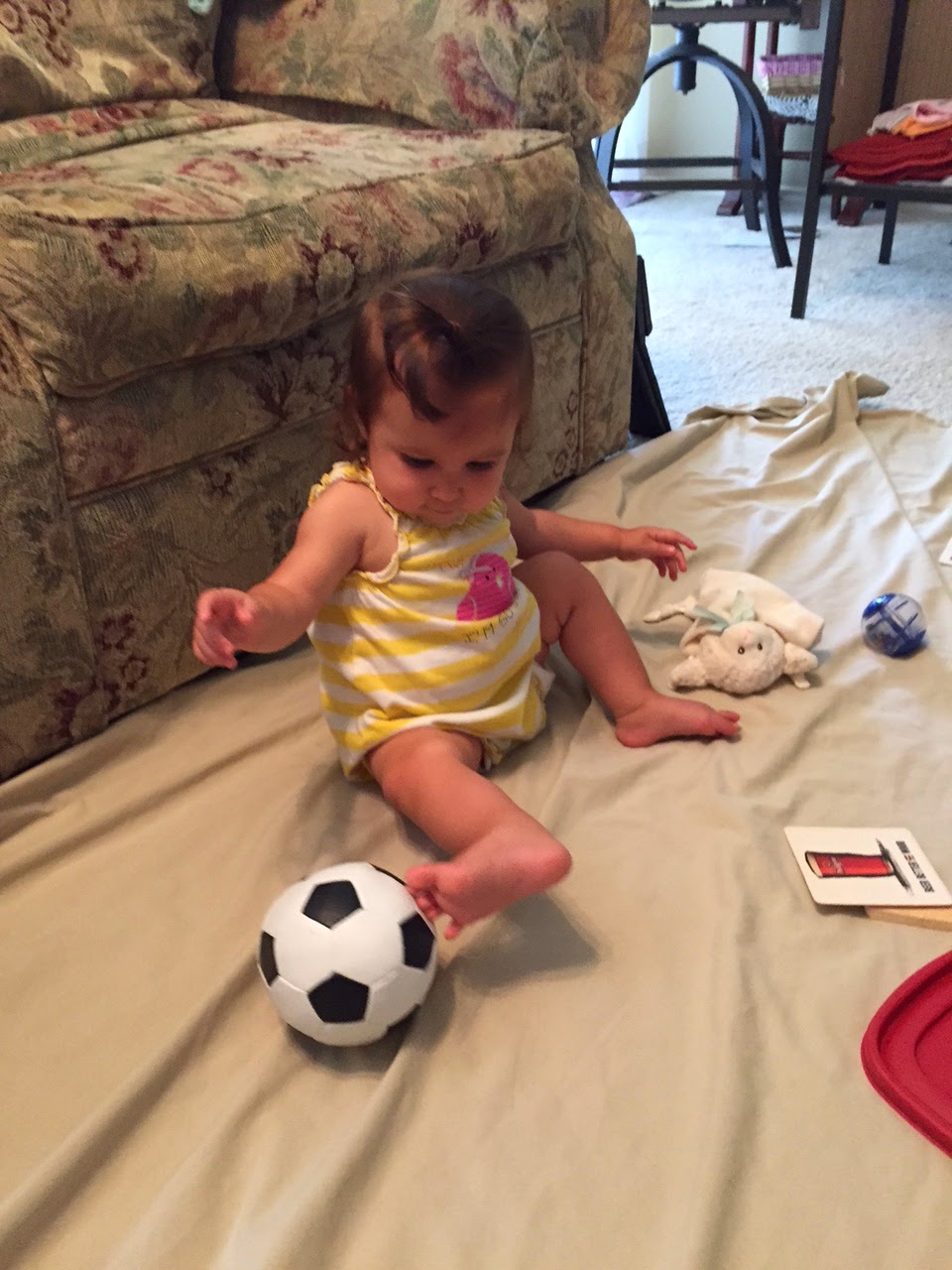 Disclaimer: this is not an investment site. Do not make any investment or financial decisions based on anything you read here or think you may have read here.


Apple will likely report a 2Q15 beat to consensus EPS of $2.14 this coming Monday [after market close, $2.15] on strong revenue growth (up 24% from last year) and margin trends (41.0% vs. 39.3% last year). The iPhone will be the primary focus as investors look for any indication of continued above average sales trends compared to previous iPhone cycles. While recent iPhone sales share in the U.S. and Europe appear slightly ahead of previous years, strong sales in China will be the primary driver behind 35% growth in iPhone unit sales. ]

In addition to earnings, Apple is expected to announce an updated capital return program.

The Mac and iPad are becoming less of a factor for earnings as those two product categories now represent a smaller percentage of Apple's overall business. It will be difficult to get Apple Watch sales expectations from guidance, but management may give commentary on how the Watch launch is proceeding. Similar to last quarter, the impact from a strong dollar will be reflected in management's revenue and margin guidance for 3Q15.

Remember those big new rigs in the Bakken? Zacks reports:

Quarterly earnings per share from continuing operations (excluding special items) came in at 96 cents, which surpassed the Zacks Consensus Estimate of 79 cents. However, compared with the year-ago adjusted profit, the results fell almost 34% from $1.45.


In a report published Friday, Barclays analyst Jeffrey Bernstein commented on Starbucks Corporation's second quarter results, which were "stunning," led by upside to comps in the core Americas and U.S. Bernstein noted that Starbucks' second quarter Americas comp of 7 percent was above his expectations and consensus estimates of 5 percent.

The analyst added that comp growth was distributed across all dayparts, geographies and platforms (food and beverage), while demonstrating strong growth during peak times, which implies additional room for capacity.

Looking forward to fiscal 2016, Bernstein sees mobile order and pay being a "key initiative" to support accelerated comp growth. As such, the company can return to a "beat and raise" scenario in years past.

I don't know when I first posted a note about Tinker Tailor but this may have been the first note, back in February, 2015. I finally finished the book. I would not have understood it, and I probably would not have enjoyed it, had I not seen the motion picture. It's an incredible story. The book was a spy thriller, I suppose, simply a spy thriller, nothing more, nothing less. But the screen play adaptation was incredible -- changed it into a love story. It was very, very clever.

I will now re-read the book, probably come close to re-typing the whole thing but in a manner differently than how I re-typed Virginia Woolf's The Waves and Mrs Dalloway. I typed Mrs Dalloway in free verse; took about six months, typing a couple of hours every day or so.

I'm also reading George Bird Grinnell's 2008 The Cheyenne Indians. I've read a lot of books on the Plains Indians, but this may be the best so far. It's funny how things work out. I will enjoy The Cheyenne Indians having just read a throwaway (in a sense), The Origin of Tepees, which I've talked about before, including here.

Our older granddaughter is in sixth grade, first year of middle school. She was a member of a small team that competed at the local level (won) and through the wickets, eventually took first place at state level, Texas. The team now goes to Iowa to compete internationally. The class was "Community Problem Solving." Their project had to do with animal shelters. It would be very similar to "Community Organizing 101." I'm hoping to see a press release so I know more about it. The details are sketchy, now surprising, coming from a sixth grader and her mother (our older daughter). LOL.

Here the team is in Austin posing for pictures; the event was held in the Doubletree, so I am not sure if this is in the Doubletree or the Capitol; probably the Doubletree. The picture was taken yesterday, Saturday. Today, Sunday, they will receive their medals. 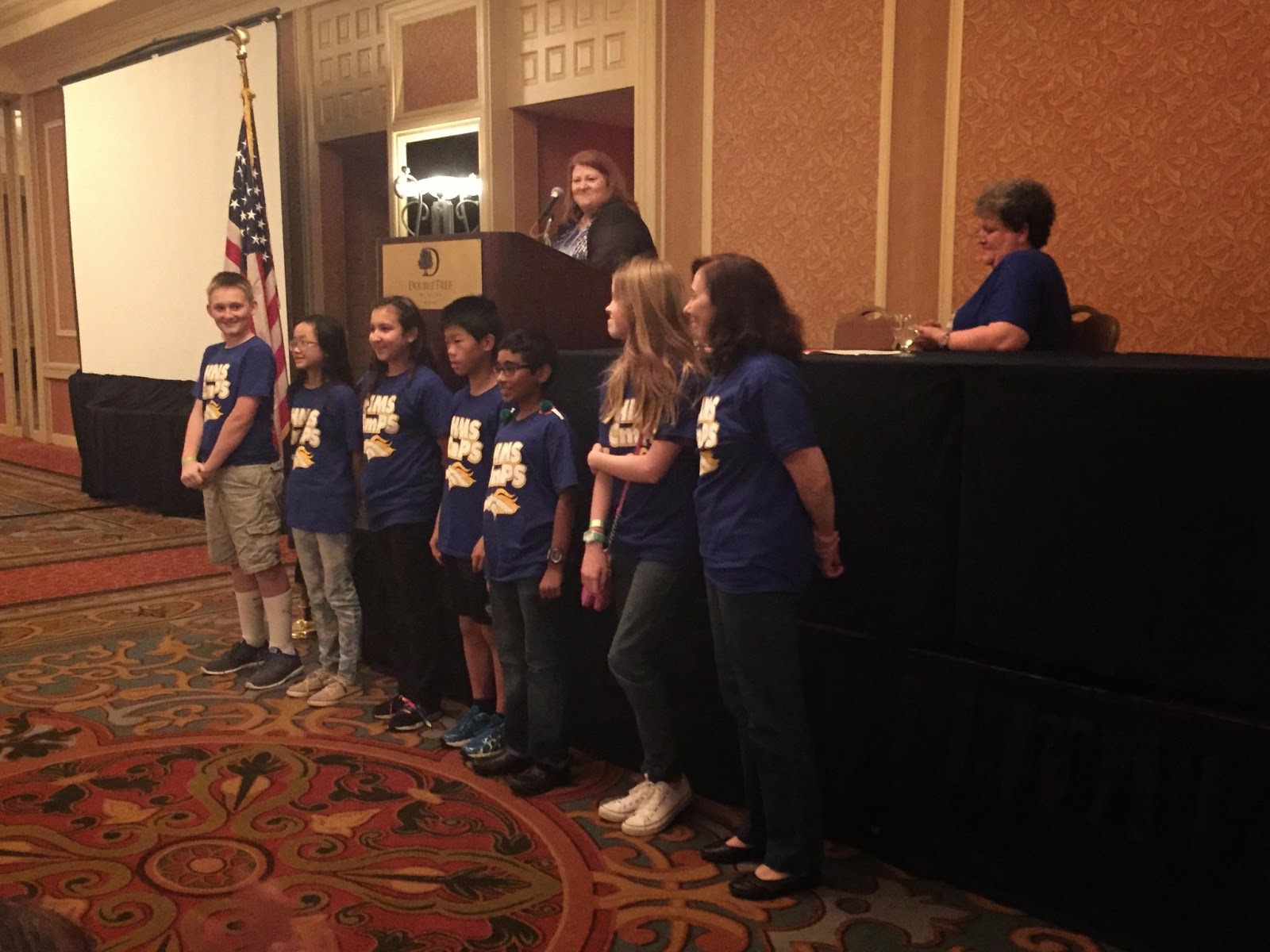