Something not seen before? 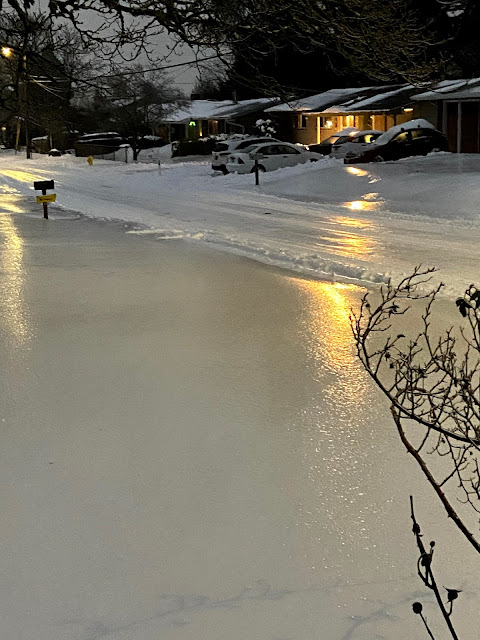 There's definitely a difference between global warming and global cooling. 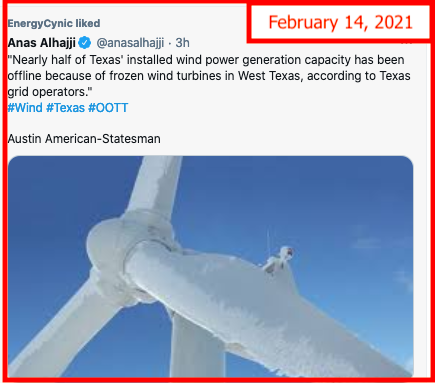 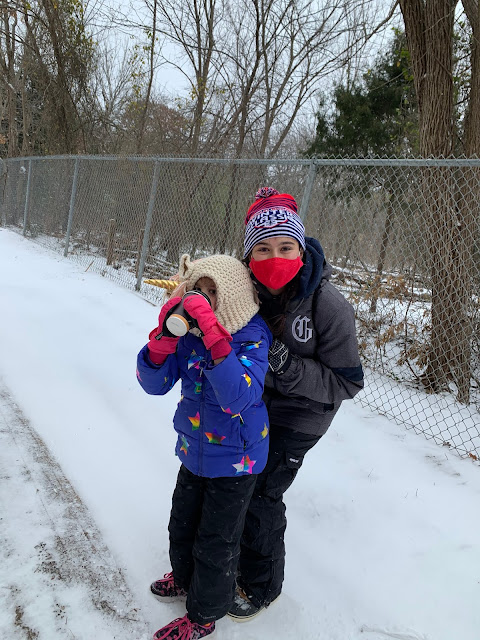 Later, 11:16 p.m. central time: Logano, Keselowski, fighting for win. Huge crash up front. Winner? NASCAR needs to review the video footage: it's going to be either McDowell, Chase Elliot, ... there it is, Michael McDowell declared the winner.  Sponsor: Love's. McDowell led one lap. The last one, and not much of a last lap. Wow, wow, wow -- multiple video drones seen circling the winning car. I had not seen the drones before. The drones are really, really creepy. Looks so much like a sci-fi "thing." The drones are flying about four feet off the ground circling McDowell. The drones can literally be anywhere and get there in moments.

Later, 10:34 p.m. central time: egg on my face. They got 'er done. They got the race going at 9:00 p.m. central time after an-almost nine hour weather delay -- RED. And it turned out to be a great race. Denny Hamlin won the first two stages; favored, obviously, to win the race; if he does, three consecutive wins at Daytona. Great race; I'm loving it. 50 laps to go. Denny Hamlin has led half the laps so far. If no car problems he should win. But I bet it's close.

Ruined by a salute to Bubba Wallace from Toyota with its "I Can't Breathe" commercial just before the race begins.

Lap 14: huge wreck. Took out a lot of cars. Happened up front. Remember, they had only one hour of practice this week. Fourteen laps of a 200-lap race. Unbelievable. Lap 14. This is really, really unfortunate. #10 and #48, side-by side, row two .. Bell, #20, in row 3 bumped car in row and started the wreck. Only lap 14. The announcers seem more excited about the wreck than what it means for the race. The media likes wrecks but taking out a dozen cars in lap 14? I think the fans and the crews deserve better. Bell started in the pole position. #10 -- Almirola started 29th, was running 2nd; not sure who was running side-by-side with Almirola. They were side-by-side, less than a foot or so apart, when #20, Bell, hit #10 in the rear at an awkward angle, spinning out Almirola. Bell moved through the wreck just fine. #48, Alex Bowman, running 3rd was running side-by-side with Almirola, and taken out by Almirola. Sixteen cars involved in the wreck.

Now, during the caution, RED, lightning strikes less than three miles away. Announcers say it will be a brief interruption. Weather radar here. Current cell is fairly long; then a gap before the next cell. If the current cell results in rain on the track they will have it dried off just as the second cell arrives.

I would say this race is over for the day, even before it started.

This raises the odds that Denny Hamlin, #11, will win the Daytona 500. Prior to the race, odds makers had Hamlin as the favorite with 8 - 1 odds to win. Hamlin is looking for his third consecutive Daytona 500 win.

Now lightning strike, still RED, to heavy rainfall -- a thunderstorm. Let's just call the race over for the day. Looks like 28 cars on lead lap.

A reader asked about "freeze-offs" in the Permian.

See this link. And note the date of the article: October 26, 2017 -- these freeze-offs are nothing new. It's just the "intensity" of the cold this year, and the duration. 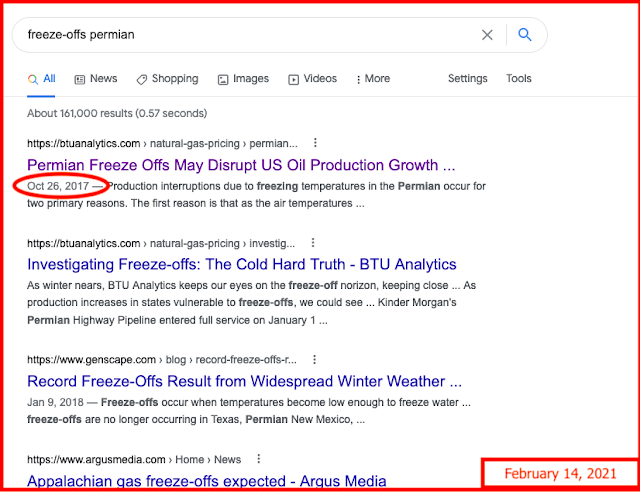 Bakken supply is expected to shrink at a time when areas around Chicago and Detroit will most need the support, increasing the region's reliance on natural gas in storage. US Upper Midwest demand is expected to jump 2.6 Bcf/d day over day to 22.5 Bcf/d on Jan. 27 before rising again to 23.8 Bcf/d on Jan. 28 as temperatures dip 11 degrees Fahrenheit below the five-year average to roughly 16 degrees. 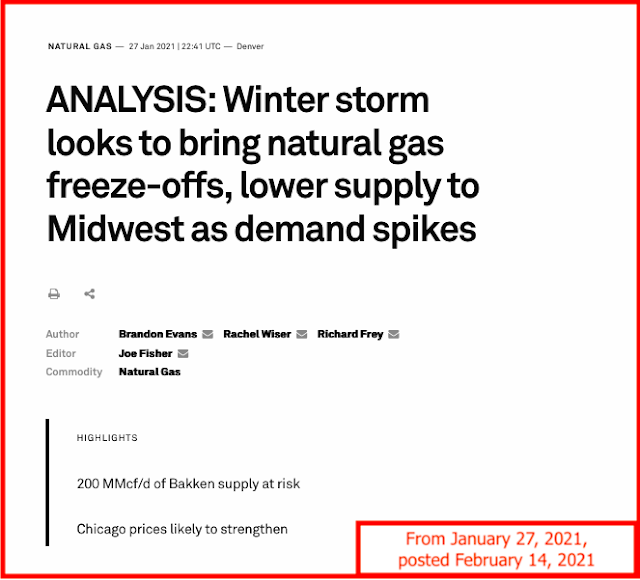 Now, imagine the "same thing" with Biden shutting down crude oil pipelines across North America, and judges shutting down CBR across state lines.

A reader in the Bakken sent me a nice note, working on CLR wells southeast of Williston. I would like to post more of the note but sticking to rules on anonymity, all I will post is the photo he sent me. It says it all: 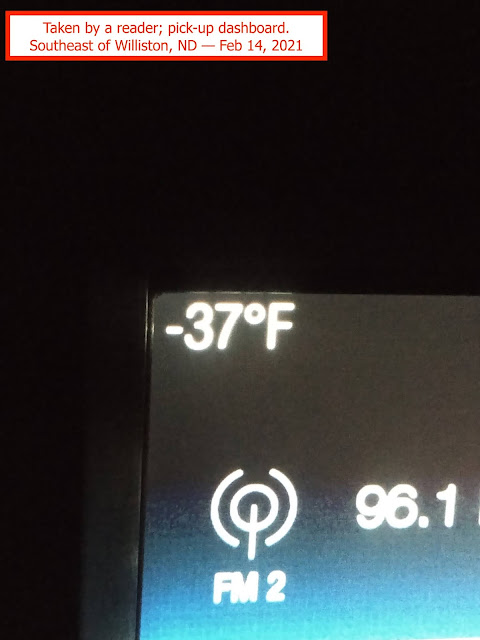 Another reader asked about electricity demand in Texas. My reply:

I survived the night.  Kept the heat off to save electricity for the state. LOL. But yes, I did not have the heat on overnight. I will turn it on briefly to get the chill off, get a cup of coffee and wait for the Daytona.
So far, the utilities have managed to prevent rolling brownouts. If we have brownouts down here it will be devastating. The houses are not insulated at all, and, of course, no one has fireplaces.
Texas ERCOT site here: http://www.ercot.com/content/cdr/html/loadForecastVsActualCurrentDay.html.
and, here:  http://www.ercot.com/content/cdr/html/actual_loads_of_forecast_zones
Demand:
Record demand during summer, at 74K MWh: https://www.houstonpublicmedia.org/articles/news/energy-environment/2019/08/13/342706/texas-breaks-records-for-peak-electricity-demand/.
February demand will set records for February but I doubt it will set yearly records. The problem is not the demand bu the supply -- "freeze-offs" in the Permian shutting down supply of natural gas to power plants.

********************************
Television Today
Wuthering Heights, 1939: seems to be a fitting movie on TCM right now. LOL.
Daytona 500 later today. Unfortunately weather forecasts suggest it will be rain-delayed until Monday at the earliest.
It's going to be a long 3-day weekend. Plenty of time to continue reading my copy of the Annotated Wuthering Heights. Notes here. The symmetry of the genealogy of the two families has always fascinated me. Now, today, I've noticed additional symmetries.
Later: I don't know if I've ever watched Gone With The Wind (1939) with Clark Gable, et al. What little I've seen, I don't think I would care for it much at all. But wow, It Happened One Night (1934), pre-code, also with Clark Gable, et al. Now that one, I love. LOL.
Hollywood pre-code period: 1929 - 1934.
********************************
The Book Page
I'm re-reading Privileged Planet, Guillermo Gonzalez, Jay W. Richards, c. 2004
Link here for my notes on the book.
All things being equal, I would prefer the average global temperature to increase by 2°C than experience the bone-chilling winters of North Dakota and Siberia, not to mention the Arctic and the Antarctic. LOL. But then, that's just me. And the 100's of thousands of Brits that flock to the tropical islands every year. And the NoDak snowbirds flocking to Phoenix this time of year.
From the Privileged Planet: it is amazing how fine-tuned our planet is to sustain life as we know it. When one reads the book, it is interesting to ask, which is more believable:
I ask that without bias or prejudice, preconceived notions. It is simply amazing all the "things" that were / are required for the earth to be what it is. Absolutely amazing.

This is one of my top ten books. Along with The Annotated Wuthering Heights. LOL. It's going to be a great day for reading.
Posted by Bruce Oksol at 9:44 AM No comments:

We'll Sing In The Sunshine, Gale Garnett
Posted by Bruce Oksol at 12:18 AM No comments: