Update On Venezuela -- September 9, 2017 -- My Reading Of The Update? China Owns Venezuela; Russia Wants A Piece

Disclaimer: I know nothing about The DVA Group nor The Selinger Group. I'll sort that out later. I don't know how reliable their website Venezuelan Daily Brief is or if the group has an agenda. This is the first time I've come across the blog. Interestingly enough, it uses the very same "blogger" application that I use and the very same domain.

These are the data points from the current post that jumped out at me:
When I put that all together, this would be the 30-second, elevator speech: China owns Venezuela and Venezuela is already negotiating with China on certain oil sector assets.

For newbies, it is not unusual for cash-strapped countries and/or companies in the oil business to trade oil production in exchange for services or other production. For example, oil service companies like Schlumberger will take "payment" in the form of oil production in some cases.
Posted by Bruce Oksol at 1:35 PM No comments: 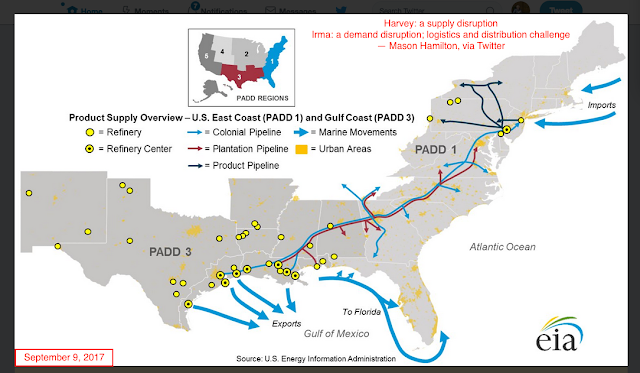 Miscellaneous List Of Items Under-Reported By The Mainstream Press -- September 9, 2017

For the archives. A list of miscellaneous data points that seem to get less attention in the mainstream media than they deserve.

Democrats in the US Senate appear that they don't want Catholics in the Federal judiciary. The press barely reported this.

End of crude oil exploration. Perhaps the most stunning news in the oil sector this past week was the announcement by France that exploration of crude oil is coming to an end for that country. The announcement was stunning. The reality is unchanged. The implications are staggering. It's not because France does not have oil (it does, and it has a lot of oil); it's a political decision. Imagine if the US had banned fracking ten years ago. This is going to be huge for US distillate exports (see graph at same link.)

Venezuela is imploding (will become a failed nation). Venezuela crude oil imports (into the US) have reached a new low. Likewise, imports from Saudi Arabia have dropped to half that we saw in 2003. Combing that with $45 oil and some suggest that Saudi Arabia could deplete its cash reserves in less than five years.

Economic indicators: folks seem a bit more optimistic with regard to GDP than might be realistic, but at least we're trending toward 3% growth rather than 1% growth. During the last few years of the Obama administration there was a fair amount of chatter worried about the US sliding into another recession; that talk ended after November 8, 2016.
Strange bedfellows. The "sweet spot" for investors may occur when an alt-right president starts cutting deals with the alt-left. I do not recall in modern history how quickly and how quietly the US debt limit was lifted; government shutdown was averted; and, a huge amount of infrastructure federal money was approved by Congress -- all in two days, this past week. Expect another huge amount of infrastructure money to be released two weeks from now once Hurricane Irma is history.

ObamaCare: death by a thousand cuts. Regulatory rollbacks by the Department of HHS; minor tweaks by Congress; the end of "advertising" by the White House; insurance companies pulling out of states across the US. In everything but name, the program is essentially over. There is still much to do with regard to costs, but the market will take care of that.

Mideast:
The Red Queen is dead: the number of onshore US rigs is trending down; crude oil production continues to increase; in the natural gas arena, it appears to be the same, perhaps more so. Mike Filloon is one of the very few analysts are talking about new completion strategies and how that will be the next shale story.

Re-balancing supply / demand crude oil: re-balancing has occurred much more quickly than I expected but a) we're still talking 30 weeks, which puts us well into 2018; and, b) there's not guarantee the situation will improve for the oil companies.

The Keystone XL is back in the news.

EVs: the jury is still out but California scrapped a $3-billion-EV-subsidy bill. Tesla missed August deliveries by 25% and no one noted that. Tesla guidance: 100 Model 3 vehicles in August, up from 30 in July, but, in fact, delivered only 75 Model 3 vehicles in August. Next milestone: 1,000 vehicles/week. If Tesla is unable to meet their goal, it suggests that those who talked about the wiring complexity in manufacturing EVs were right. The "real" price of the Tesla Model 3 is being under-reported.

EVs: the jury is still out but the graphic at this link is not reassuring for the EV industry.

Wind energy: the just is still out, but the excitement seems to be over, at least in California. Iowa has more installed wind energy capacity than a state many times larger.

$5-Milliion Williston Animal Shelter Could Be Opened By Next Spring --- September 9, 2017

A little over six years ago we noted the passing of a great pioneer in the Williston Basin oil patch: "Buck" Scheele. One of his legacies will be the construction of a $5 million animal center. Neither the press release from the office of the  City of Williston Economic Development or The Williston Wire provided the back story (if either did, I missed it) but it was reported that the "Buck Scheele Family Animal Center is back on track."

The goal is to have the center opened by the spring of 2018.