ISIS defeated: edge goes to Syria's President Bashar al-Assad; next up: the American-led Kurds. From The WSJ:


The Syrian regime’s successful offensive in Deir Ezzour this week pushed it ahead in the race against America’s Kurdish-led allies over who will inherit Islamic State’s remaining Syrian real estate.

With the extremist group losing ground fast, President Bashar al-Assad has emerged in his strongest position since the Syrian uprising began in 2011. Yet large parts of the country remain outside his reach, including an American-protected zone run by the Kurds in northeastern Syria and a smaller Turkish occupation zone nearby.

The question now is where precisely the line between regime and Kurdish areas will be drawn after Islamic State’s defeat and whether it will solidify into a semi-permanent partition of the country or spark a new bout of violence that could force the U.S. to make difficult choices.

Death by a thousand cuts: what Congress could not do, the marketplace will. From The WSJ:


ObamaCare insurer in Virginia to scale back planned expansion.  Optima Health says it's plan to expand is tied to other insurers' withdrawals from Virginia's exchange as well as key policy questions in Washington.

ObamaCare bailout: insurers have nothing to worry about. Now that Trump is cutting deals with Pelosi and Schumer, the health insurers will do just fine, thank you. It appears the insurers will continue to get their money from DC to fund ObamaCare, but at the same time, the insurers will reduce coverage, cut and run.

Road to Paris: France plans to end oil output by 2040 with exploration ban. Link at Bloomberg. Data points and comments:
How bad is it for Europe? from the link above, 2013:

Opening the European business summit in Brussels on Wednesday, he said, "It's now becoming clear; eventually Europe may well be the only continent in the world to depend on imported energy.

"Already by 2035 our dependence on oil and gas imports will reach more than 80 per cent."

2040: EU and California are fighting climate change on their own; China and US have moved on. 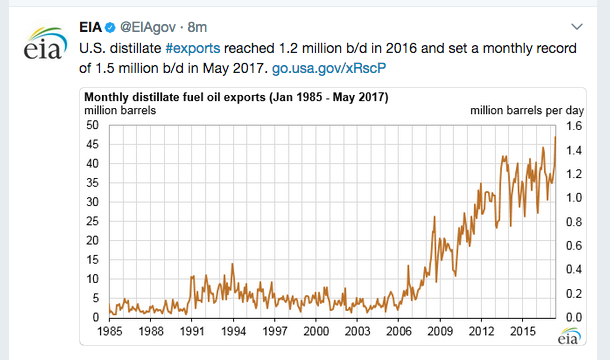 FWIW: Libya's Sharara oil field reopens after pipeline blockade lifted. No link; no longer interests me.
Posted by Bruce Oksol at 7:40 AM