November 25, 2017 -- Blogging Will Be Delayed Until Later This Evening Or Tomorrow

The WSJ has a full half-page article, second page of the front section, about the fight between eastern North Dakota and western North Dakota over oil money. I personally find these stories detestable on so many levels. Besides being an old, old story, there is a huge, huge error stated as fact. Please don't send me the link (I already have it). Thank you.

I'll get around to the "top stories" of the week either later this evening or tomorrow, another NFL-free Sunday.

We have had such incredible weather the past few days; I've really enjoyed the opportunity to get back to biking.

Today looks like another beautiful day and I've brokered a deal with our daughter and son-in-law to have Sophia spend the day with us. I've already made a list of "things" and errands Sophia and I have to do. She is a great companion.

Yesterday, her dad took Sophia, age 3.5 and her oldest sister, in her early teens, rock-climbing. The middle sister is a great rock-climber but did not want to go yesterday. I went to watch. Their dad had never tried rock climbing until yesterday.

It looked like so much fun, I "gave in," and signed in to join them. I have short videos of all four of us rock climbing, but for now, I'm only going to post one of Sophia.

Some time this week I will post the video of my very, very first climb.

But then, after this, I'm going to turn off the computer and spend the day with Sophia. She's on her way over. 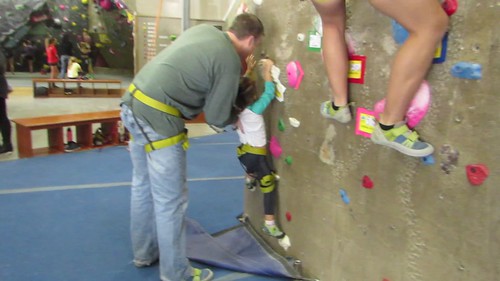 Sophia could only go up a bit higher than her dad could reach, otherwise I think she would have gone to the top. That was her second time ever; the first time was just as good but the video not quite as good. She was the youngest rock climber there yesterday. The next "youngest/oldest" was another young girl, age six years. (Now that I think about it, of the rock climbers less than 10 years of age, the ratio was about four girls to one boy. Among the teens, it was perhaps split equally, although it appeared there were slightly more young women. Among the adults, more men than women, but not be much.

No one wears helmets, but I think children climbing for the first time should wear helmets; when "free-falling" it's important to kick away from the wall, keeping one's face toward the wall, so as not to hit your noggin against the rock. It's hard to explain that to a 3-year-old but as you can see, she did a great release and descent.
Posted by Bruce Oksol at 11:44 AM No comments: