From January 22, 2015 -- I had completely forgotten all about this story; a reader reminded me of it.


Kinder Morgan Inc. announced Wednesday it has struck a deal to buy the company, which is owned by Continental Resources Inc. CEO Harold Hamm and some family trusts. It also will assume the Enid company’s debt.

Hiland had been a publicly traded company until Hamm bought all outstanding units in 2009. It owns oil and natural gas gathering, transportation and processing pipelines in the Bakken Shale in North Dakota and Montana.

Kinder Morgan said the Hiland deal gives it a premier midstream platform in the Bakken, with a significant amount of acreage dedicated under long-term gathering agreements with companies such as Continental, XTO Energy Inc. and Whiting Petroleum Corp.
Some readers have followed the Harold Hamm story from the beginning: a good ol' boy who started life as a trucker hauling water out of the oil fields.

Some readers have followed the Harold Hamm story from the beginning: a good ol' boy who started life as a trucker hauling water out of the oil fields.

Some would say he built these businesses: CLR and Hiland Partners.

And then there are others who would say he didn't.


What A Doofus
And folks get upset about President Trump's tweets. LOL.

(In hindsight, I am surprised by all the folks in the mainstream media that had to come out to "defend" the previous president. Thank God and Greyhound there are term limits.)

The Trump Era? One wonders if after only 159 days in the presidency, one can start to call this the "Trump Era"? Be that as it may. Here's another huge energy story (a "hat tip" to the reader who sent me the link). From LA Biz, a new study projects 2 million more gas related jobs by 2040.

Where's Waldo? I can find a gazillion stories on solar and wind energy if I got to sites specific for intermittent energy. However, if one follows business news in general and/or energy news in general, it appears that oil and natural gas stories literally swamp the number of stories related to solar and wind. In fact, I haven't seen a single intermittent energy story today in any of the sites I've visited today. Even CNBC hasn't had one story on solar/wind energy today, but a lot of stories on oil. My hunch is that this would not be true if Hillary were president.

The market: there's a huge rally in the stock market -- across all three indices, and yet, there are only 86 new highs on the NYSE suggesting that ... well, I don't know what it suggests -- but, here are some tickers symbols that caught my eye on the "new highs list: BK -- whoo-hoo; CNI; CP; GBX (Greenbrier); TSO.

Over at "The Big Stories," I have a link to "LNG Exports." The first post was dated October 4, 2015. We all expected the LNG story to be a big story, but I think it is growing much faster than anyone expected. And here's another story, showing just how far-reaching Cheniere Energy is. From Zacks:
Later, CLR / Harold Hamm will expand deal with South Korea for natural gas.


Under the backdrop of "Energy Week" in Washington, Continental Resources and SK E&S of South Korea announced they will sign a memorandum of understanding Wednesday which expands their existing joint development agreement to consider pursuing other opportunities with US shale plays, including the development and exporting of liquid natural gas. 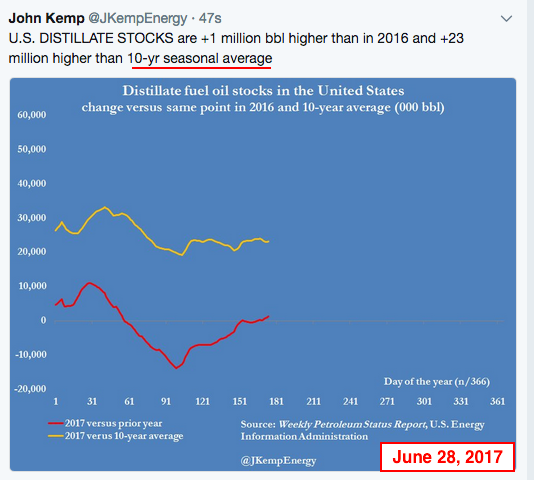 But note this: OPEC (and others) keep talking about the 5-year average. The 5-year average is no longer "valid" after the two-year Saudi surge, 2014 - 2016 and similar surge in US shale. One needs to use the 10-year average which I have mentioned many, many times. I see that John Kemp also uses the ten-year average -- at least in this tweet.

And look at that 10-year comparison: US distillate fuel oil stocks are up over 23 million bbls. That is simply staggering. The number is so staggering, the 10-year average cannot even be placed on the graph above.

US gasoline inventories: the same holds true for gasoline (compare the next chart with the chart above -- see if you can spot any differences -- I could not): 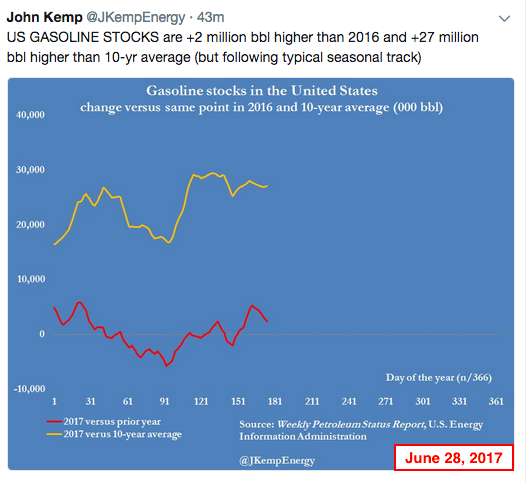 US crude oil: and to complete the picture, the US crude oil inventories graphic -- third verse, same as the first: 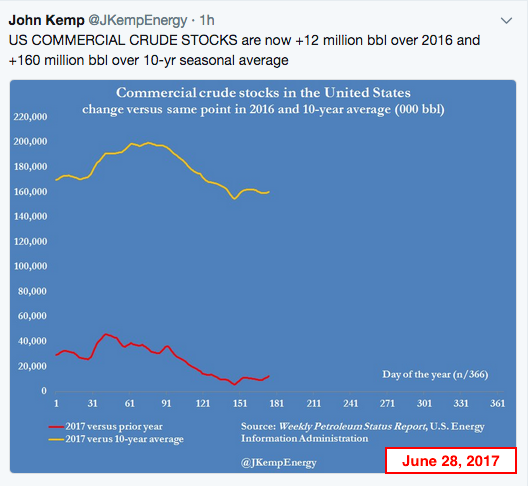 Henry The 8th, I Am, Herman's Hermits

Glut: reported earlier but with sketchy data. The data and associated analyses are now coming in and things don't look good. From Oil & Gas Journal, regarding US crude oil inventories:

Irrelevant. The fact that the Dow 30 surges 150 points in an already over-extended market tells me all I need to know about the relevancy of the US Senate; the stalled health care bill; and, the much-talked-about-seldom-seen tax reform bill: all irrelevant.

Fake News settles: in another win for "truth and honesty," ABC has settled with a South Dakota meat producer over an inflammatory, libelous, and, ultimately, a fake news story. The suit was for $1.9 billion. The terms of the settlement not disclosed but something tells me ABC was not prepared to lose $2 billion. LOL.

Say what: Just the other day the mainstream press wrote that this year's grain harvest will not be as good as previous years because of global warming. Today. EIA says that ethanol capacity has actually increased year-over-year, apparently not concerned about corn production. One wonders how much grain was taken out of production so farmers could plant grass (corn). Just saying. From the EIA today:


Fuel ethanol production capacity in the United States reached 15.5 billion gallons per year, or 1.01 million barrels per day (b/d), at the beginning of 2017.

Total capacity of operable ethanol plants increased by about 4%—or by more than 600 million gallons per year—between January 2016 and January 2017…Of the top 13 fuel ethanol-producing states, 12 are located in the Midwest. The top three states—Iowa, Nebraska, and Illinois—contain more than half of the nation’s total ethanol production capacity. --- EIA

Octane capacity. Based on a story yesterday, ethanol is NOT the concern. Rather, octane is the concern going forward; there could be a shortage sometime in the out years. I hope farmers start planting more octane.

Global warming: Algore brought inconvenient truths about global warming to the American public back in the early 1990s. Inquiring minds want to know when record low temperatures were set in the US by state?
Record hot temperatures? Almost all records were set before 1994.

Discussions about ObamaCare take place in two different arenas. One arena is the political arena, the argument between states' rights and national health service. The second arena is in the money arena. In the "money" arena, there are three legs to this three-legged stool: a) taxes on medical devices; b) corporate mandate; and, c) the individual mandate. But what does the big round seat that sits on the three legs represent? Medicaid. Right now, my hunch is that the US congress and US Senate could get together on the three legs, but the big obstacle is where one's butt sits -- Medicaid.


Illinois cannot afford a cut in US federal Medicaid support. Period. Dot.
Posted by Bruce Oksol at 9:15 AM No comments:

Wow, this was unexpected. So much for all that concern about "no vote" on health care bill in the US Senate -- new records today? At the opening:
China and natural gas, records being set. From Reuters:
Worried? Harold Hamm sounds worried.

Posted by Bruce Oksol at 8:56 AM No comments:


RBN Energy: natural gas takeaway constraints pose challenge for crude oil production in the Permian. This sounds vaguely similar to the early days of the Bakken boom in Norht Dakota.