We grew our high-return production in North Dakota by 18% quarter-over-quarter, maintained our focus on costs, and returned over $70 million to shareholders through share repurchases and dividends. Year to date, we have now returned approximately $200 million to shareholders. Our 2019 plan remains on track to deliver 9 to 10% annual liquids production growth and 15% on a per share basis, while maintaining our low financial leverage."

Article can saved as a PDF.

At that SeekingAlpha article, Filloon posted this graphic, one of many: 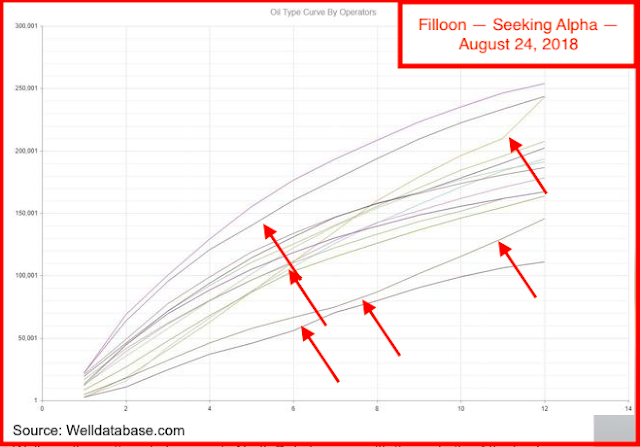 The graphic (pay attention to the two wells marked with ovals): 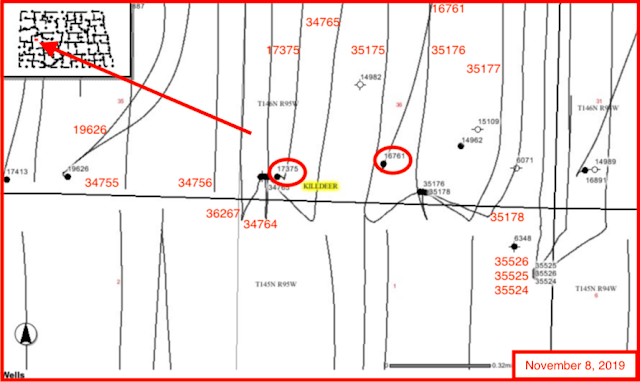 A reader was the first to spot this for me -- a week ago.

Since then, just a few:
It will be interesting, over the next few years, to see how weather scientists walk back all this talk about global warming now that the grand solar minimum starts to make sense.

With regard to the Arctic blast that will hit next week (and then the one after that), the "global warmists" tell us that global warming is responsible for that: global warming will make summers hotter and winters colder.

This is just fourteen minutes of the much longer presentation when Steve Jobs introduced the first iPhone back in 2007.

Apple Watch sales grew to 6.8 million units in 3Q19. Staggering? I don't know. But this is: if that estimate is accurate -- Apple won't release official figures -- the Apple Watch shipments are up a shopping 51% compared to 3Q18.

This is not supposed to happen according to peak oil theory. 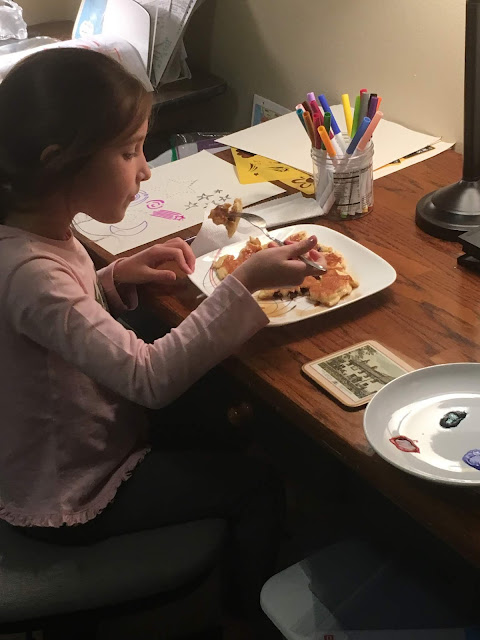 From a reader earlier this morning:


Did you cover the last EIA monthly production results?

Note: total "Appalachian" (PA/WV/NY/OH) is now at 157,000 bopd. This is above the record 150,000 bopd from the 1890s (per James Hamilton academic paper). So basically the tired old oil fields are now doing more than they ever did. Something for the peak oilers to consider...

Natural gas: many records as well, most notably ND breaking an iconic 3 BCF/d. PA is nearing 20 BCF/d (may hit by year end). TX is nearing 30! Paging the peak oilers ...

Peak oil? What peak oil?
Posted by Bruce Oksol at 9:39 AM No comments:

Note: in a long note like this, there will be factual and typographical errors. If this is important to you, go to the source.

ENB: must have had a good earnings report; in pre-market trading, up about a percent. Headlines:
Disclaimer: this is not an investment site.  Do not make any investment, financial, career, travel, job, or relationship decisions based on what you read here or think you may have read here.


These wells are yet to report this week --


A number of proposed liquefaction plants and LNG export terminals along the U.S. Gulf Coast are racing to secure regulatory approvals and line up sales and purchase agreements, all in the hope of reaching final investment decisions before their rivals. Yet, these Texas and Louisiana projects now face competition from a facility that would be sited more than 3,000 miles away, in the icy waters just off the North Slope of Alaska. Qilak LNG would use a “near-shore” liquefaction plant in the Beaufort Sea off Point Thomson, AK, to supercool the region’s nearby, abundant and now largely stranded supplies of natural gas, load the resulting LNG onto ice-breaking carriers, and use these carriers to make shuttle runs to and from LNG customers in Asia. Today, we review the Qilak LNG project and the economic and logistic rationales driving it.

The state of Alaska and producers along its North Slope near Prudhoe Bay have a crude oil and natural gas problem on their hands. On the crude side, production from the Alaska North Slope (ANS) region peaked at 2 MMb/d in 1988 — 11 years after the 2.1-MMb/d Trans Alaska Pipeline System (TAPS) from the North Slope to Valdez, AK, was completed. Since then, ANS oil output has been declining steadily; in 2018, it averaged only 464 Mb/d, according to the Energy Information Administration (EIA), and in the first eight months of 2019, ANS production fell to less than 450 Mb/d.

As flows through TAPS ratchet down below 550 Mb/d, more and more mitigation is needed to keep the oil moving through the pipe due to freezing, wax buildup and other problems that come with lower flows. Worse yet, if and when volumes on TAPS fall much below 350 Mb/d, all bets would be off on whether the pipeline could continue to operate without a major re-do.

Then there’s the gas conundrum. North Slope oil fields also produce large volumes of associated gas, and while mixed NGLs can be removed from the gas stream and sent down with the crude on TAPS, there’s no way to market the remaining natural gas. The ANS gas is stranded. Literally stuck in the middle of nowhere because plans for a big gas pipeline from the North Slope to the Lower 48 never gained traction. Fortunately, there’s been a good local use for the gas: every day, about 8 Bcf is re-injected into the ANS oil fields to help maintain pressure and force more oil to the surface. Enhanced oil recovery, in other words. But for reasons too complicated to get into here, the re-injected gas does less and less good as the amount of oil still in the ground declines.

With declining oil production — and declining state revenues from that production — there’s been a big push on for several years now to finally make use of at least some of the many trillions of cubic feet of gas that have been re-injected into the ANS oil fields.

The state’s Alaska Gasline Development Corp. (AGDC) and three energy companies (ExxonMobil, BP and Conoco) had been working together to advance the $45-billion-plus Alaska LNG project, which would process 2.5 Bcf/d of North Slope natural gas; transport it 800 miles through a new, 42-inch-diameter pipeline to Nikiski, AK, on Cook Inlet on the Kenai Peninsula south of Anchorage; supercool the gas into LNG at a new three-train, 17.4-million-metric-ton-per-annum (MMtpa) liquefaction complex; and ship the LNG to Asian buyers. In 2016, though, the three energy companies decided not to provide financial support for the next phase of the project (namely, front-end engineering design, or FEED), leaving AGDC as the sole entity still working on it.

Which brings us to Qilak LNG, a North Slope liquefaction and LNG export project that is being developed by an affiliate of Lloyds Energy.

(Qilak, an Inupiat word for the environment — land, sea and sky — is pronounced KEE-lack.)

The proposed first phase of the project calls for the development of a 4-MMtpa liquefaction plant that would be constructed in a shipyard in Japan, South Korea or China, then floated to a site a few miles off the coast of Point Thomson in waters deep enough to receive large LNG carriers. The development of a second and third plant of identical design off Prudhoe Bay, AK (just west of Thomson Point) and the Mackenzie Delta (just across the Alaska-Canada line Northwest Territories) is possible, if project economics and LNG demand warrant.

Much more at the link.
Posted by Bruce Oksol at 7:49 AM No comments: