January 10, 2016: "a millenium's worth of earthquakes" in Oklahoma reads The [London] Guardian headline.


Oklahomans don’t blink when they hear warnings about tornadoes, drought or ice-storms. Earthquakes, however, catch their attention.

Increasingly tied to tremors shaking the west, fracking for natural gas is creating alarm and division around western states that until recently enjoyed a boom in jobs and revenue.

In Oklahoma, seismologists have warned that significant temblors last week could signal a larger, more dangerous earthquake to come in a state where drilling is destabilizing the bedrock.

That's probably a bit of hyperbole that  "Oklahomans don’t blink when they hear warnings about tornadoes, drought or ice-storms" but the Oklahoma oil and gas industry has cause to worry. There is a bit of irony in that fracking itself is not associated with earthquakes, but rather the disposal of all that waste water in deep salt-water disposal wells.

Outside the Bakken, the first ship of US crude oil departed on December 31, 2015, under relaxation of rules on exporting US crude oil. 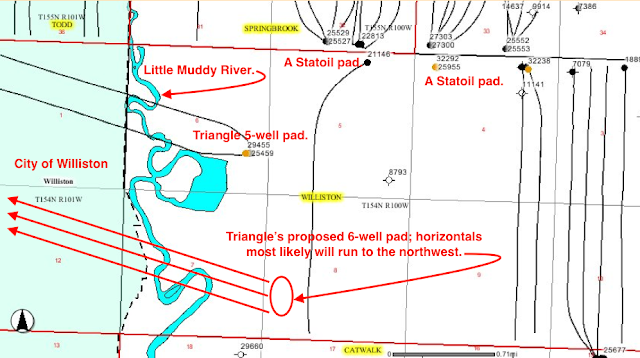 For the Statoil roughnecks:


Waterloo, Abba
Posted by Bruce Oksol at 8:48 PM No comments:

Rig location map has been added to "Data Links."

Almost every afternoon I take the youngest granddaughter to the park. We do a lot of things together, but I try to "let out the leash as long as possible" and let her explore the park without me hovering.

I think this is one of my favorite videos. She had just come over to the bench where I was sitting to get a few Chex pretzels. She then went back to the light/sound game, sat down, put the Chex out in front of her, and then had a snack until someone came along to "start" the game. She is unable to press the buttons hard enough to get the game started, but once someone comes along and starts the game, she jumps up and starts playing.

The conference calls that will perhaps be most interesting to help understand the Bakken this past year (2015) and the coming year (2016). This list is not yet complete.

ENB: May 6, 2016, hopefully we will have some information earlier

This is not an investment site. Do not make any investment or financial decisions based on what you read here or think you may have read here. The conference calls should provide some insight into where the Bakken was last year and where it will be going this year.


Amazon made a $92 million profit last quarter, or about 19 cents per share. That’s peanuts compared to other tech giants like Google, which netted $3.93 billion last quarter, or eBay, which made $682 million. But analysts expected Amazon to lose 14 cents per share. In fact, it’s unusual that Amazon, a 21-year-old company, actually turns a profit at all. Last year the company lost 27 cents a share in the second quarter.

When it comes to immigration, it's "open borders." But when it come to taxes and corporations, all of a sudden, Congress, Clinton, Obama, and Trump want closed borders. All are against "inversions." The New Yorker in the most recent issue, "The biggest corporate deal of 2015 was also, in the view of many, the shadiest: Pfizer's $160-billion merger with the Irish drug company Allergan."

The writer noted this about Pfizer: "Look at Pfizer. The CEO was born in Scotland and raised in Rhodesia. More than sixty per cent of its revenue comes from overseae, and most of its employees work abroad."

The big question: so why is Pfizer an American company? Whatever.

By the way Pfizer's CEO was born in Scotland raised in Rhodesia. Our own president was born in Hawaii and everything he learned before kindergarten was in Indonesia. LOL.
Posted by Bruce Oksol at 1:58 PM No comments:

Disclaimer: all data is unofficial; all data is subject to error. Assume there are typographical and/or factual errors. If this information is important to you, go to the source. Everything about the Bakken is posted in good faith. This is not an investment site. Do not make any investment, financial, or relationship decisions based on what you read here.
Slump In Oil Price, January 1, 2016 - December 31, 2016
Slump In Oil Price, October 1, 2014 - December 31, 2015
Permitting, 2016
Pricing, Part I
Pricing, Part II
Saudi Arabia Market Share
Mid-East Geo-Politics
OPEC Realities

Total permits. This is from my database. See disclaimer above. I assume my numbers are different from those of the NDIC, but I also assume they are very close. These are only oil and gas permits, not salt water disposal permits. If this information is important to you, go to the source:


There's growing evidence that Saudi Arabia's attempt to flood the crude market at a time of oversupply and concerns about weakening demand is not working, American oil billionaire Harold Hamm said Tuesday.

"We're in a predatory pricing environment. That's what's happened. The Saudis turned 1.8 million barrels on, and basically their intent was to drown us. But they've not got that done. It's been a monumental mistake for them, I might add, a trillion- dollar mistake."

Hamm cited speculation that Saudi Aramco, the state-owned oil giant, may sell at least part of its operations in an initial public offering.

"They're having to sell part of their business to keep doing what they are doing," he said, referring to the refusal by the Saudis to cut production. "They're having to sustain a country. We're sustaining companies here. We cut capex and quit spending money. And ride it out."

Pressure may be mounting on Saudi Arabia from fellow OPEC members, as crude prices continued to trade around 12-year lows Tuesday morning. Nigeria's oil minister said a couple members of OPEC have requested an emergency meeting. But other members said the group won't be gathering to talk about oil prices before their next scheduled meeting in June.


Original Post
OPEC's trillion-dollar miscalculation, reported in Forbes. After reviewing the past year's events, and looking at an alternate strategy, the writer concludes:

The annual difference in those scenarios is $541 billion. OPEC already lost out on that much in 2015 from the sharp drop in prices. If prices remain at these levels for most of this year, the foregone revenue for OPEC in 2015 and 2016 will easily top $1 trillion since that November 2014 meeting.

Was this a miscalculation on the Saudis’ part, or is there a deeper strategy at play? I firmly believe they failed to anticipate how sharply oil prices would drop. I think they believed that oil prices could fall somewhat below $75/bbl for a short period of time, and that would be enough to bankrupt a lot of the shale oil companies and allow OPEC to recapture market share.

Instead, the shale oil producers slashed costs, and while some producers have gone bankrupt — and other bankruptcies are undoubtedly on the way — shale oil production has proven to be much more resilient than the Saudis and OPEC expected.

At that time, the Saudis argued that it didn’t make sense for them to cut production. The highest-cost producers, they argued, should be the ones to cut. It is true that defending oil prices by cutting production — the strategy favored by Iran, Nigeria, and Venezuela — would have propped up these high-cost producers. But the shale oil boom was going to run its course and probably peak in a few years. OPEC still controls 1.2 trillion barrels of proved oil reserves — 72% of the world’s total. Thus, unless they expected shale oil production to continue to expand by millions of barrels per day every year, the group could have tightened up production as needed to maintain much higher margins on a shrinking market share. They would have higher revenues today, knowing they would capture back market share as the world’s non-OPEC reserves depleted.

Their strategy may yet pay off though. If they can keep enough marginal production sidelined over time, this period of financial difficulty could enable them to recapture higher margins in the future. If they are able to realize $10/bbl more for their remaining reserves as a result of the current strategy, then their pain will be worth it (for them) in the long run.

Remember all that talk about increased crude oil imports in December (John Kemp tweets -- I'll look for the posts later), we now have October EIA data.

Saudi Arabia crude oil imports into US, October, 2015, data updated. Imports from Saudi Arabia remain near historic lows (remember, Saudi has a huge refinery along the US gulf coast they must supply (I believe that refinery has a daily capacity of 800,000 bopd); columns below are monthly, January through December; most recent data, October, 2015:

Crude oil imports into the US from various sources, May, 2015 vs October, 2015 (numbers rounded monthly):


With the extension of the tax benefits, wind and solar projects started before year’s end will qualify for a 2.3 cents per kilowatt hour production tax credit. It will gradually diminish through 2019. Wind and solar projects could opt instead to take a 30 percent investment tax credit that reduces their federal taxes dollar-for-dollar by what they put into the project. The main difference is that the solar production tax credit will phase out at the end of 2022.


While green energy has a lot of public appeal, it is still intermittent in nature. And that has put the grid’s traffic cops in an untenable position. They are the ones whose job it is to schedule the flow of electricity on the lines. Their task is to maintain that reliability with the lowest-priced fuels.

Because neither the wind nor sun blows or shines on demand, they need to be firmed up with other easily “dispatchable” forms of generation. That creates two distinct issues:

The first is that the back-up power is not free and the second is that if coal plants are “cycled” up and down, they release more pollutants per unit of output than if they ran full steam ahead.


RBN Energy: Where U.S. Crude Would Move Next If the Economics Were Right.

Jobs: payrolls in US rise more than projected; jobless rate at 5%. BloombergBusiness is reporting:


Payroll growth surged in December, capping the second-best year for American workers since 1999 and further evidence of a resilient job market that prompted the Federal Reserve to raise interest rates.

The jobless rate held at 5 percent, and wage growth rose less than forecast from a year earlier.

Guns: whether accurate or not, it's being reported that the US murder rate is the lowest in history (?) and yet American gun ownership is at record highs. I will let others confirm. The fact that the president has not mentioned the murder rate suggests the reports are probably accurate.


Hanging On The Telephone -- Ring, Ring, Blondie -- ABBA
Posted by Bruce Oksol at 7:41 AM No comments: