... actually, I have cable, but it's "basic cable" so it has some of the major networks. But the fact that I don't have "cable" means I don't watch television. If I did, I would be watching President Obama's swan song. Oh, spare me.

Now, to watch another episode of Columbo and then to watch episode 2, season 1 of Fargo.

And unlike Lynch, one can actually follow the plot of Fargo.

Also, similar to Twin Peaks.
Posted by Bruce Oksol at 8:08 PM No comments:

Maybe this is simply "business as usual": you decide, fair and balanced. Farsnews is reporting:


A number of blasts hit Baqiq industrial city in the Southern Saudi province of Jizan where the kingdom's giant Aramco oil facilities is located.

The local residents of Al-Sharqiya region where the Baqiq industrial city and the Aramco oil facilities are located confirmed huge explosions near the huge oil facilities, the Arabic-language media outlets reported on Tuesday.

The oilfields of Aramco, including Qawareh oilfield, are located in Shiite-populated Eastern Saudi Arabia. 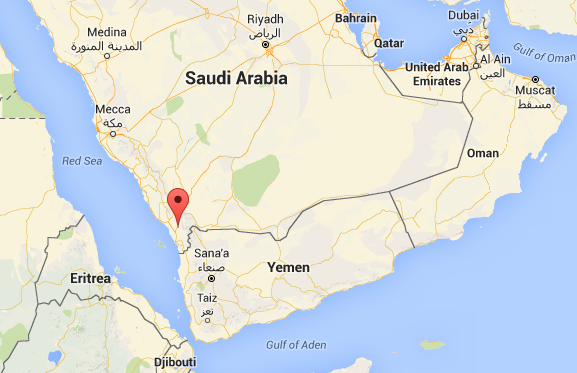 This is pretty cool, from SeekingAlpha:

Profit outlook disappoints. No one is ever satisfied.
Posted by Bruce Oksol at 7:42 PM No comments:

Fundamental Energy is not "public" and should not have to publish any information except as they wish. On the other hand, one would assume Whiting would at least mention this at some point as a publicly traded company if it's a "material event."

Regardless, at some point, the wells being transferred among operators will show up on daily activity reports.

It would be interesting to some readers, I suppose, if anyone has any additional information on this transaction.

Disclaimer: this is not being posted for investment or financial reasons. I post these because it helps me understand the development of the Bakken. There is no hidden agenda.
Posted by Bruce Oksol at 3:38 PM No comments:

How's That Ship Taking US Crude Oil To Switzerland Via Italy Doing? -- January 12, 2016

Over at some other apocalyptic gloom and doom site, it was said that there are absolutely no cargo ships on any of the global oceans today. Of course, that was dead wrong. The writer got his information from a site that was not meant to track ocean-going tankers. But it was fun to see someone else get something so wrong. I've done that more than once. LOL.

But it reminded me, how is that ship taking American crude oil to Italy doing? Let's check.

When you do that, you will have to zoom way, way out, to see where the ship is located. That location was from January 5, about a week ago, and the ship was just east of Florida then. To get a more recent location, based on satellite data, one needs a subscription. Which I don't have.

The distance from Miami, FL, to Naples, IT, is 4,608 nautical miles.  Doing the math, at the speed shown, the ship has about 13 more days from January 5 to get to Italy, about January 18th. They said it was due January 20th, the numbers seem to work out.
Posted by Bruce Oksol at 12:56 PM No comments:

BP To Cut It's Upstream Workforce -- Assuming I Read The Article Correctly -- January 12, 2016

It's hard for me to believe the government figures on job growth in the USA when I see stories like this. The way the article is written below it's a bit confusing but it appears that this is what the writer is trying to say:
That's how I read it. It seems it could be read other ways, but that makes sense to me. The writer mixed apples and oranges, it seems, and for all I know, I still don't have it right.

This is how Reuters is reported it:


British oil and gas company BP announced plans on Tuesday to slash 5 percent of its global workforce in the face of a continued slump in oil prices.


"We want to simplify (our) structure and reduce costs without compromising safety. Globally, we expect the headcount in upstream to be below 20,000 by the end of the year," a company spokesman said.

EIA updates oil severance taxes for Alaska, Texas, North Dakota, Wyoming, Oklahoma, and West Virginia. No surprises. No surprises, but Alaska is in a heap of trouble based on the graphs. 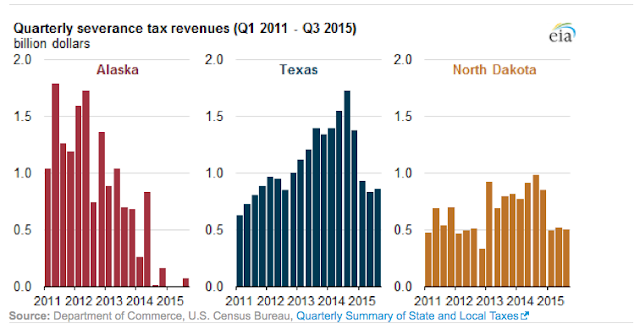 Look at the last seven quarters for Alaska -- all of 2014 and the first three quarters of 2015: the state received no revenue from the oil and gas industry in two of the last three quarters; and, in a third quarter (3Q14) almost nothing. Note the huge spike in 2Q14 preceded and followed by very low numbers. One can say the weather turns better in 2Q14 but that would also be true in 3Q14 and that was one of the worst quarters. The trend is a disaster; the volatility is terrifying.


El Nino and the warm winter weather are being blamed for the weak demand for distillate fuel oil in the United States, but the slump in oil production is probably having a bigger impact.

The oil industry was the fastest-growing customer for middle distillates like diesel between 2009 and 2014.

The oil industry itself accounted for 20 percent of all the increase in diesel consumption during the five-year drilling boom.

Businesses engaged in oil drilling, pipelines and refining consumed 2.1 billion gallons of diesel in 2014, the most recent data available, up from just 760 million gallons in 2009.

One wonders to what the significant drop in gasoline demand can be attributed to the slump in the oil and gas industry.
Posted by Bruce Oksol at 10:26 AM No comments:

A Reader Had A Question About Number Of Wells Whiting Might Be Selling -- January 12, 2016

With regard to the information below, a reader asked about Whiting selling wells to Foundation Energy Management LLC. The press is reporting that Whiting is selling a total of 331 wells to five different companies, but the reader thought he had heard Whiting was selling significantly more than that to Foundation Management. For now, this is what I have regarding new operators in the Bakken and the number of wells being transferred.

One of the nice things about re-posting information, sometimes one sees things not previously noted. With the news that Petroshale (USA) received its first North Dakota permit yesterday, and then running through the list below, it is interesting to note all the new oil and gas companies with ties to Canada entering the North Dakota Bakken. Just an observation; may or may not be relevant (or accurate).

I thought I had posted this, but maybe I haven't (yes, here is additional information posted at this site; perhaps some of this is redundant). From Oil Patch Hotline based on a December 9, 2016, briefing by Lynn Helms, NDIC:
From The Bismarck Tribune, December 28, 2015:
Since then, there has been another new operator in the Bakken identified: Petroshale (USA).


RBN Energy: update on oil production coming out of the Gulf of Mexico; production increase in the gulf is offsetting the decline in shale production.

Also, at the same site, an update on Canadian CBR due to denial of the Keystone XL. Link here.


Canadian crude oil is still making its way south into the U.S. despite the decision by the Obama administration to reject the project plan for TransCanada’s Keystone XL pipeline.

Most recently, Houston-based USD Group announced that it plans to double the capacity of its rail terminal in Hardisty, adding heavy crude oil, butane and propane to the mix of products it can load at the terminal.

The Hardisty terminal is relatively new, only having started operations in June 2014. It currently has the capacity to load up to two 120-railcar unit trains per day.

Crude oil is delivered to USD Group’s termian via pipeline from Gibson Energy’s Hardisty storage terminal, which holds 6 MMBO, according to USD Group.


For background on this story, see this post. Note the route of the huge transmission line that will cut through some of the prettiest landscape in the land of 10,000 lakes. This is to bring hydroelectric electricity in from Canada to back up intermittent (and redundant) wind farm electricity from North Dakota.

Today the Hibbing Daily Tribune is reporting that the project has received a recommendation from an administrative law judge to proceed with the transmission line.


The Minnesota Power’s Great Transmission Line that would help supply the company’s northeastern Minnesota customers with renewable energy has cleared an important hurdle.

An administrative law judge has recommended approval of a route permit for the line, which is designed to bring renewable hydroelectricity from Canada to northeastern Minnesota.

The 500-kilovolt, 220-mile line would run from the Canadian-U.S. border northwest of Roseau, Minn., to an expanded Blackberry electric substation east of Grand Rapids.

The Minnesota Public Utilities Commission (MPUC) has final authority over selection of the eventual route. That decision is expected by March 2016. 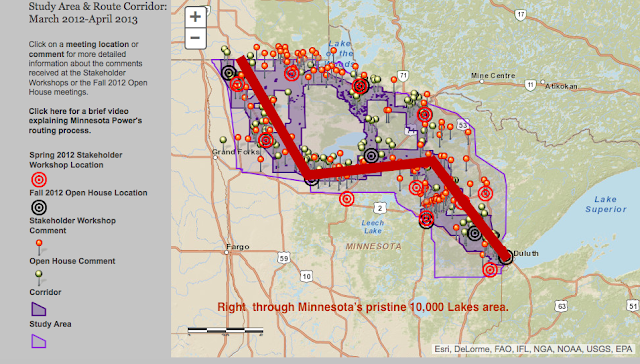