I wish I had said this but I didn't; a reader did:


Is the USA next? Right after Russia, and Europe? The only continent with growth is Antarctica ... and that is the f*#&^%g ice.

The Japanese recession is blamed on a tax increase. Remember, one of the largest (if not the largest) tax increases in the history of the US is yet to be fully implemented. Most of ObamaCare was deferred or delayed until 2015 or 2016 by executive order.

How will US stock market react to this news? Remember: Japan is the world's 3rd largest economy. It UNEXPECTEDLY slips into recession. How do you think the US stock market will react. Hint: Dow futures tonight are down 80 points. The market will use any excuse to take a profit; the market is trading at new highs; has hit record highs in six of last seven sessions. Time for some profit taking. Talking mony.

Yes, or no? Do you support that extension?

The poll at the sidebar at the right won't stay up long, unlike most polls.


I've argued that the gap between the haves and the have-nots is widening. I've also argued that many analysts have not adjusted to the "new" economy. the economy is doing poorly for some; not so poorly for others.

I've written about the widening gap between the "haves" and the "have-nots" on numerous occasions.

I see there are several links over at the Drudge Report with that theme (see below). The number of stories on the widening gap begs the question, "why now?" Why are these stories starting to appear now; even I noticed this as far as as August, 2012, and probably well before that.

The answer. It has to do with what I've been saying for the past few weeks. With the mid-term elections now behind us, it is time for the mainstream media to start moving Obama off center stage to make room for Hillary (though the tea leaves suggest she needs to start writing a new book and simply fade away).

Here are the stories that are now being reported by the mainstream media, to continue the process of moving POTUS off center stage:

Some years ago when I started my aggressive reading program, I read a bit of Daphne du Maurier, including Rebecca. Then I saw the Hitchcock movie. For whatever reason, I got the movie out again, and began watching it again this week. Watched it last night again for the first time in a long time. Tonight, the movie with the critic's commentary. It is an incredibly good movie; holds up very, very well over time.

Wells coming off confidential list over the weekend, Monday: 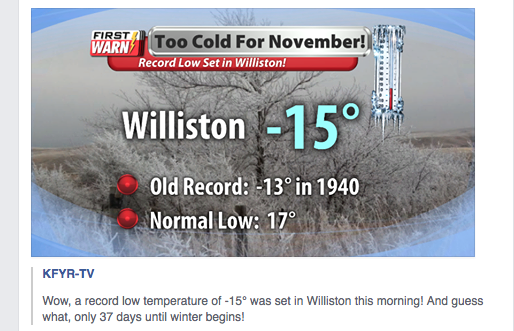 Over the weekend we've been driving around quite a bit of the Dallas - Ft Worth metroplex. I was surprised again by how much interstate and highway construction that is going on in the area. I have driven cross country several times in the past four years, and have spent a fair amount of time in the Boston area over the past four years. I have a pretty good feel for road construction. It looks like 95% of all highway construction is occurring in Texas, and the other 5% is occurring in the Bakken.

There is a lot of development going on in north Texas, in addition to all the road construction. Thinking about that development/construction and the pending immigration, in my opinion the three states to watch for growth are North Carolina, California, and Texas. Of the three, California looks like it has the most to lose. For one reason, the new immigrants have a huge state in which to move around in Texas, and not simply along the border. San Antonio, among the non-border cities, will probably see the largest influx. California, on the other hand will see most of the new immigrants in a relatively (percentage-wise) small area of California. Los Angeles County will probably see the largest influx of the California counties. Texas has the jobs the new immigrants will need; California? Not so much.

The other states? Louisiana, of course, is going to do very, very well. Oregon may be a positive surprise.

New York? Like the cover on Bloomberg Businessweek in which Taylor Swift is now THE music industry, NYC is New York. And the tea leaves suggest it will be a struggle for NYC.

Boston and New England? The anti-growth crowd in Vermont, New Hampshire, and Massachusetts pretty much says it all. For all the driving I did in eastern Massachusetts over the past four years, I saw very little road construction. And there is no question that the roads in Massachusetts are in much worse shape than any in Texas. The "Big Dig" sucked up a lot of transportation money; and, the roads are simply much older in New England than in the southwest. New England and New York state only have to look at what Philadelphia is doing (reported earlier today).

It feels like Christmas holidays today. It's cold outside, and the forecast is for a very small bit of snow tonight. We have the heat on (something I rarely do) and the apartment is toasty warm. May is making chocolate chip cookies, and the younger granddaughter is working on her crafts. The older granddaughter is busy at her own house and did not come over, at least not yet. When she hears we have fresh chocolate chip cookies, she will probably come over.

Earlier today (and yesterday, for that matter) traffic was backed up about two miles on on the highway / exit ramp to the up-scale mall and Bass Outdoor World just northwest of where we live.

With a bit of snow tonight, it's going to feel a lot like Christmas.

And now, Sunday night football. I missed the NASCAR championship race; we don't get ESPN on our basic television plan and the neighborhood sports restaurant only shows NFL football on Sundays.