I've gotten a lot of linked articles sent to me by readers; I will eventually get to all of them.

I have received some great observations regarding the Bakken from some readers which I will also post.

I couldn't possibly be in a better mood but there is just so much to write about -- but eventually I will get to it.
Posted by Bruce Oksol at 9:28 PM No comments: 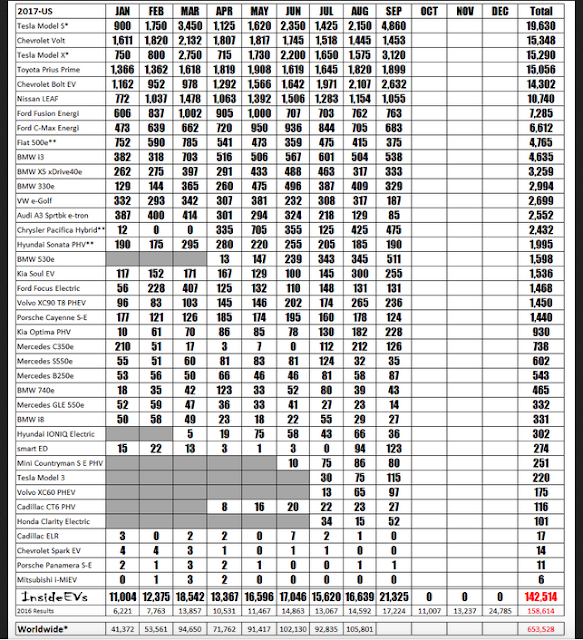 The model's estimate of the dynamic factor for September—normalized to have mean 0 and standard deviation 1 and used to forecast the yet-to-be released monthly GDP source data—fell from 1.53 to 0.18 after the report.

So, was I correct yester-afternoon/evening when I wrote:


Jobs. The unemployment report for September, 2017, is to be released tomorrow. Never take President Trump literally, but always take him seriously. Perhaps he is talking in "generalities" in this tweet, but when he says unemployment is the "lowest it has been in decades" suggests he has seen the data that will be released tomorrow. So, we'll see.

Yeah, I think the president had the numbers last night.

"Everyone" was watching the number of jobs in light of the two epic hurricanes. Usually, "everyone" focuses on the unemployment rate. But not this time. "Everyone" focused on the numbers. Forecast: an increase of 95,000 jobs; actual: a decrease of 33,000 jobs.

Big deal. This is the real story. For decades it was a two-digit number: the unemployment rate.

What 99% of Americans will understand is that the unemployment rate unexpectedly droped from 4.4% to 4.2% That's the lowest rate since February, 2001.  Yes, since 2001. As Presdient Trump said last night, "unemployment the lowest in 16 years."


So, now we know (although, in fact, we "always knew") the president has the data the day before the number is released.

By the way, lots of talk about a jobs number that actually declined. This is rare but not unprecedented. It was also negative in September, 2010 (under the Obama administration) -- a fact not mentioned on CNBC. The two "large" hurricanes in September, 2010 (Igor, Julia) did not hit the US (Igor caused some large waves off the coast of the US and one person drowned off the coast of North Carolina).

One other interesting data point. I pointed out that for the first time in history, CNBC is now paying attention to U6, now that Trump is in office -- this is a "higher" unemployment number than the reported U3 and during the Obama administration no one wanted to touch U6 on the morning talk shows. U6 is 8%+ compared to the 4.2% U3. With the Trump administration, we will see U6 being talked about more often.

Interestingly, the data took a bit of wind out of their sales. U6 actually improved. I have to look it up but I think it decreased from 8.3% to 8.1%. U6 was mentioned in passing on CNBC but it decreased, like U3, and they didn't spend much time on that.

But this is the graph that tells the story: 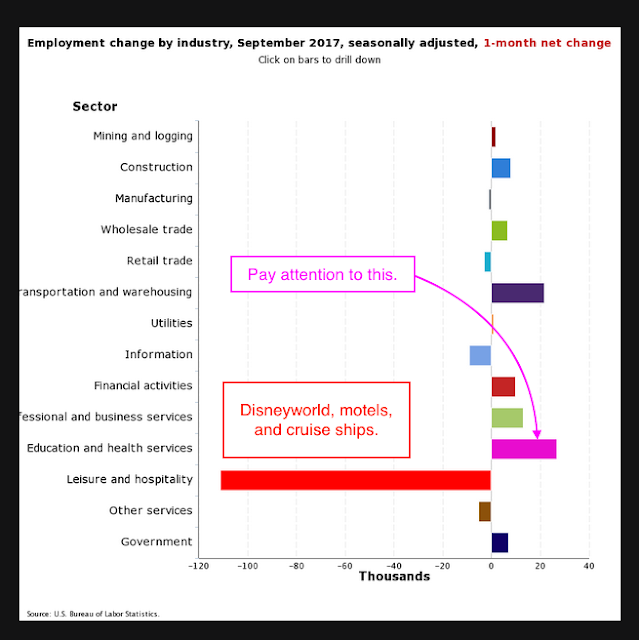 Disney World, motels, and cruise ships are already back in business.

"Pay attention to this." What's that all about? We discussed that yesterday at this long, meandering post in which we discussed the reason for the strength and duration of the bull market.