I've posted many times about the incredible Bailey oil field. I'm convinced MRO has a vice-president of operations whose only job is to manage this field. My hunch: an intern, recent engineering graduate from UND.

See this post, plus another one that was started late last night and is still in progress.

Active rigs: daily active rigs being reported by NDIC -- 32 -- I did not check the list for duplicates; one is a SWD well;

Although we don't have scout ticket data for these new permits, based on their location it is likely they will run north and in the 1280-acre drilling unit: sections 5/8-146-93.

Poll to the right: will NFL postpone any games? Yup, three games scheduled for this weekend have been postponed.

Active rigs: daily active rigs being reported by NDIC -- 32 -- I did not check the list for duplicates; one is a SWD well;

Wow, what a Christmas treat! Enjoy.

Mr Whitten would love to hear from and may appreciate ideas for future photographs.

Usual disclaimer: this is done for my benefit. I do it quickly. There will be content and typographical errors. I generally do not go back to correct errors. If this is important to you, go to the source.

In conjunction with the Director's Cut, see the December dashboards:

More from the Director's Cut:

The FB Belford wells are tracked here. They were the first wells to roll out with Bakken 4.5, pad drilling.

What about an older FB Belford permit?

You now have the same data I have.

Two of three parent wells for the FB Belford wells are "AB." The third went offline 4/19 and didn't return to production until 10/21 -- almost two years later. Of course, there is a jump in production but that may not mean anything other than being off line for two years. Having said that, in conventional wells there is always risk taking a well off line for two years, and there had been talk that there was a similar risk taking Bakken wells off line for that length of time. So far, I've not seen that risk play out in the Bakken.

NFL, FOX and TNF: last night's incredibly exciting game was the last game that Fox will televise on Thursday night.

Next Thursday, NFL Network is the only network where TNF will stream. Amazon has rights to TNF starting in CY2022 after Fox Sports relinquished that "holding" a few years early, selling to Amazon. Amazon Prime Video will stream TNF (as it has been doing this entire season) and TNF will also be available on Hulu. Link here. Last night's game which ended in an overtime win for the Chiefs, which I guess, remains a politically-correct name.

GM: Hummer deliveries "begin." I haven't seen the photo op yet of the first customer taking delivery. GM down 5 percent in early trading today, December 17, 2021. For the past month, GM is down 14%; down $875/share. And no dividend while you are waiting. Buying opportunity today?

Hummer: cost? If you have to ask, you can't afford one. From CNBC:

Rivian: IBD. Most striking: analysts anticipated a loss of a dollar per share; in fact, $12/share. Orders placed today won't be filled until 2023 due to production constraints. Still nothing about margins.

Global warming: US tornado damage 1950 to 2021. Link here. 1950? That's about the year I was born. My mom grew up in tornado alley. I think the "thing" that frightened her the most was a tornado. 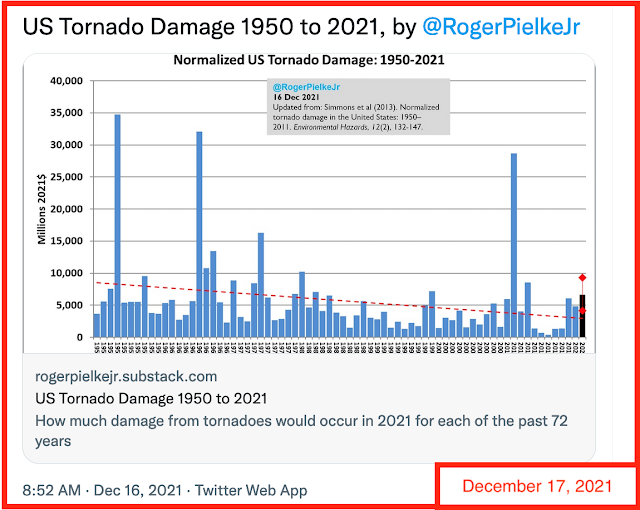 Greed: Thomas Sowell -- I have never understood why it is "greed" to want to keep the money you have earned, but not greed to want to take somebody else's money. Link here.