Anticipating A Tough Day For The Market On Monday Following Last 72 Hours -- January 29, 2017


Original Post
Disclaimer: this is not an investment site.

I don't think the "market" is going to like the way the Trump administration handled the immigration problem: futures for Monday morning are now down 80 points. The "market" was looking for a reason to take profits.

"The Planet That Wasn't There," Thomas Jones, London Review of Books, essay re: The Hunt for Vulcan: How Albert Einstein Destroyed a Planet and Deciphered the Universe, Thomas Levenson.

Two pages long, this article seems to be divided into four parts:
I'm posting the note because I'm interested in the first "part": the current search for another planet in our solar system:
This is the kind of stuff that would have fascinated me in high school. It still does, but perhaps not as much.
Posted by Bruce Oksol at 5:26 PM No comments:

My wife's family lives out in Los Angeles where there is a complete ban on plastic bags, with some exceptions, but apparently the ban is nearly 99% effective. My wife re-uses plastic bags, like most Americans, for almost everything: "brown-bag" lunches; carrying snacks to a granddaughter's soccer game; wrapping food waste before throwing it in the garbage; and so on and so forth. We save all our old plastic bags and use and re-use them over and over again.

The plastic bag situation has gotten so bad out in Los Angeles that she now mails plastic bags to herself (when she visits) and to her extended family out in southern California.

So, if you see someone using plastic bags in southern California, don't be harsh on them; the bags may have come from out-of-state.
Posted by Bruce Oksol at 3:49 PM No comments:

The price of a Big Mac Combo Meal in New York City: $8.

The price of a Big Mac Combo Meal in Paris: €8.

Data points, Russia-Rosneft-Italy-Qatar-Swiss Glencore mega-deal:
If I read that correctly, the government of Russia backed/guaranteed the deal until Intesa's loan arrived (but again, I may be misreading this)

Why is this important?
As I skim through the milliondollarway articles on Qatar, two things jump out at me:

When Saudi Arabia dispensed with quotas and agreed to let OPEC members produce at whatever rate they wanted, there was a lot of speculation regarding their reasoning.

The two reasons most commonly cited:
I think there were at least two other reasons but I won't go into that now; it will distract from the bigger point.

(By the way, one wonders who their "western" advisor was back in 2014; or, if they made their decision without "western" advice).

Regardless of what Saudi Arabia was thinking back in late 2014 when OPEC abandoned the quotas, it is pretty clear that Saudi Arabia, in hindsight, clearly misread the situation.

In hindsight, it almost seems that had Saudi Arabia and OPEC maintained orderly changes in quotas (up and down) the cartel could have:
Regardless, here's the "past" and the "future" according to the EIA: 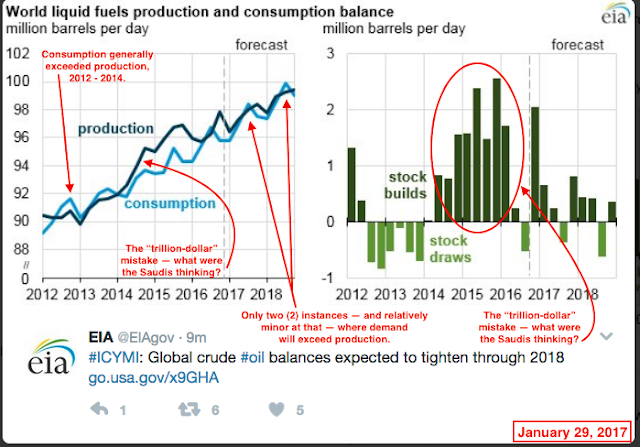 This is an incredibly good article on the state of US shale from a global perspective. Although the writer focuses on ExxonMobil and the Permian, the writer provides a lot of insight for US shale.

The article comes from ICIS Chemical Business. I was alerted to it through a reader who caught it at an investing message board.

It should be noted that this article is very, very good, but most (if not all) of it has been previously reported in more detail by RBN Energy. The writer seems to suggest that ExxonMobil had the Permian figured out some time ago, but to me, it seems, ExxonMobil was "johnny-come-late" when it comes to the Permian. The writer does not address the issue why EXOM shares have done quite poorly when compared to its peers. 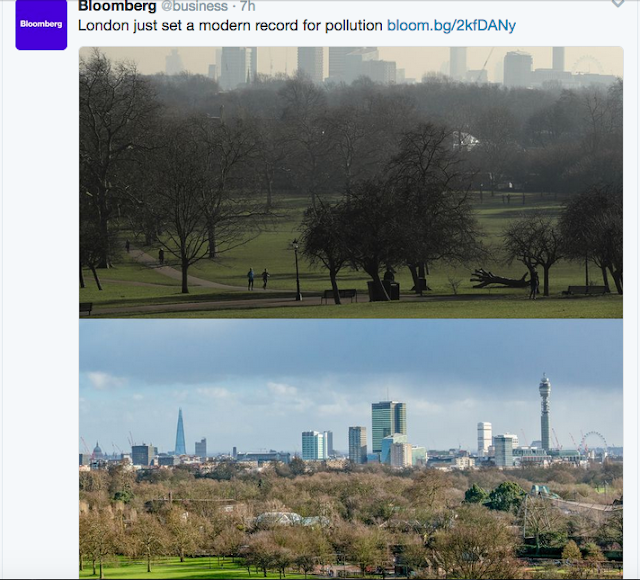 The article is over at Bloomberg. An observation: I could be wrong, but it's my impression that Los Angeles has pretty much eliminated "smog" to this degree over the decades.
Posted by Bruce Oksol at 8:29 AM No comments: